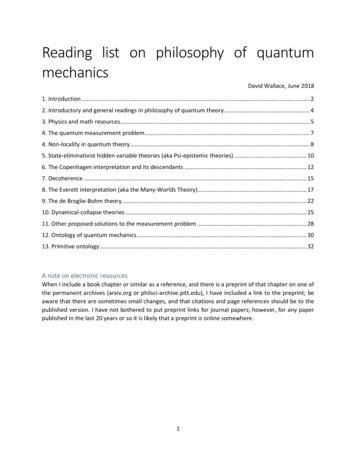 Reading list on philosophy of quantummechanicsDavid Wallace, June 20181. Introduction . 22. Introductory and general readings in philosophy of quantum theory . 43. Physics and math resources . 54. The quantum measurement problem. 74. Non-locality in quantum theory . 85. State-eliminativist hidden variable theories (aka Psi-epistemic theories) . 106. The Copenhagen interpretation and its descendants . 127. Decoherence . 158. The Everett interpretation (aka the Many-Worlds Theory). 179. The de Broglie-Bohm theory . 2210. Dynamical-collapse theories . 2511. Other proposed solutions to the measurement problem . 2812. Ontology of quantum mechanics . 3013. Primitive ontology . 32A note on electronic resourcesWhen I include a book chapter or similar as a reference, and there is a preprint of that chapter on one ofthe permanent archives (arxiv.org or philsci-archive.pitt.edu), I have included a link to the preprint; beaware that there are sometimes small changes, and that citations and page references should be to thepublished version. I have not bothered to put preprint links for journal papers; however, for any paperpublished in the last 20 years or so it is likely that a preprint is online somewhere.1

1. IntroductionThis is a reasonably comprehensive reading list for contemporary topics in philosophy of quantum theory,aimed at researchers and graduate students specializing in philosophy of physics, at colleagues puttingtogether readings for seminars and classes, at academics in related areas interested in the debate, and atambitious upper-level undergraduates looking for thesis ideas.Any such list betrays the prejudices, and displays the limitations, of the author. Where I have intentionallybeen selective, it represents my judgements as to what areas are interesting and what work in those areasis likely to stand the test of time, and which current debates are worth continuing attention, but I will alsohave been selective accidentally, through ignorance of work in one area or another of this very large field.(I am research-active in the field, but not in every area of it.) The only real way to work around these sortsof limitations is to look at multiple such lists by different people.I’ll call out some explicit limitations. I don’t attempt to cover history of physics, beyond a few sources onthe Copenhagen interpretation and the origins of the Everett interpretation, the de Broglie-Bohm theory,and the GRW theory. I don’t discuss quantum information except insofar as it relates to the interpretationof quantum theory (though C. Timpson, Quantum Information Theory and the Foundations of QuantumMechanics (Oxford, 2013) is the place to start). I discuss metaphysical issues only insofar as they seem toconnect to the interpretation of quantum mechanics, avoiding broader discussions of questions aboutseparability, holism and causation that are influenced by quantum mechanics. Most notably, I do notcover quantum field theory.In addition, this is a reading list for philosophy of quantum mechanics, not foundations of quantummechanics, and I don’t discuss more technical results except where they are clearly of direct importanceto the interpretation of quantum mechanics. I have kept to a rule of not discussing proposed modificationsof the quantum formalism except where those modifications have (a) demonstrated the ability toreproduce at least nonrelativistic quantum mechanics, and (b) generated some substantial literaturediscussing their conceptual features. (I stretch a point slightly on (a) to include a few readings on theretrocausal approach.)Within philosophy of quantum mechanics, though, I have tried to be quite broad, covering topics from themetaphysics of Bohmian mechanics to the physics-is-information interpretative strategies. I am sure thatmany experts will regard some of the topics I cover as obviously nonsensical, but I am equally sure thatdifferent experts will have very different assessments of what is and isn’t nonsense. (My own choice oftopics is based on a mixture of (a) what I think may turn out to be right; (b) what I suspect will turn out tobe wrong, but interestingly and instructively so; (c) what I think is probably silly, but seems influentialenough that someone in the field ought to know something about it; no, I won’t tell you which is which.)Philosophy of quantum mechanics falls apart reasonably naturally into subsections, but I still had to makesome arbitrary choices: notably, I separate decoherence off from the Everett interpretation, presentquestions of quantum-mechanical ontology collectively rather than under the headings of particularsolutions to the measurement problem, and give primitive ontology its own section. Under“interconnections” in many sections, I try to give some indication of what connects to what. Also, in (prettymuch) every subsection of the list I have marked one entry (very occasionally, two) with a star (*), whichmeans: if you only read one thing in this subsection, read this. The starred entry is not necessarily themost important or interesting item, but it’s the item that in my judgment will give you the best idea of2

what the overall topic is about. Where I have starred one of my own articles (which, I will admit, is fairlyfrequently) I have (almost always) also starred another.I list items in a rough reading order, which is usually approximately-chronological. It doesn’t indicate anorder of importance: it means “if you read A and B, read A first”, not “read A in preference to B”. If youwant to work out what to prioritize (beyond my starring of a few entries, above) then there isn’t really asubstitute for looking at the abstracts and seeing what’s of interest. And don’t be afraid to skim papers,and/or to skip over the mathematical bits. Of course you’ll need to read those if you ever engage closelywith the debate, but if you just want an overview, it can be overkill.3

2. Introductory and general readings in philosophy of quantum theoryTwo accessible introductions are: (*)D. Albert, Quantum Mechanics and Experience (Harvard University Press, 1994)No technical prerequisites; aimed at philosophersA.Rae, Quantum Mechanics: Illusion or Reality? (Cambridge, 2004)No technical prerequisites; aimed at a general audienceAt a somewhat higher level (and in increasing order of difficulty): R. Penrose, Shadows of the Mind (Oxford University Press, 1994), chapters 5-6Self-contained but reasonably demanding introduction to conceptual problems in QM.R.I.G.Hughes, The Structure and Interpretation of Quantum Mechanics (Harvard University Press,1989).D. Wallace, “Philosophy of Quantum Mechanics”, in D. Rickles (ed.), The Ashgate Companion toContemporary Philosophy of Physics (Ashgate, 2008), http://arxiv.org/abs/0712.0149Review article; presupposes you have studied quantum mechanics.Some important recent collections: J. Bell, Speakable and Unspeakable in Quantum Mechanics 2nd edition (Cambridge UniversityPress, 2004).Okay, this one isn’t that recent, but Bell is one of the central figures in the subject and any seriousstudent of philosophy of quantum mechanics should read him. The second edition has two papersnot found in the first (1987) edition.A. Ney and D. Albert (ed.) The Wave Function: Essays on the Metaphysics of Quantum Mechanics(Oxford University Press, 2013).Metaphysics of the quantum wavefunction; assumes little or no technical knowledge.S. Saunders et al, Many Worlds? Everett, Quantum Theory, and Reality (Oxford University Press,2010).The case for and against the Everett interpretation, touching on many other interpretative issuesin the process.M. Bell and S. Gao (eds.), Quantum Nonlocality and Reality – 50 years of Bell’s Theorem(Cambridge University Press, 2016).Looks at much of contemporary foundations of quantum theory through the lens of non-locality.4

4. The quantum measurement problemThe measurement problem is at the heart of philosophy of quantum mechanics. Do not assume consensuseven on what the problem is: different ways of setting up, or thinking about, the measurement problemlead to different ways of assessing its potential solutions. Read several different accounts and form yourown conclusions.Interconnections In this section I consider only the measurement problem in isolation, but most of the rest of thislist is concerned with proposed solutions to the problem.The transition between quantum and classical – the domain, in modern physics, of decoherencetheory – is closely connected to the measurement problem.Presentations by physicistsJ. Bell, “Quantum Mechanics for Cosmologists”, in Speakable and Unspeakable in Quantum Mechanics,(Cambridge University Press, 1987/2004). Sections 1-3.(*) J. Bell, “Against ‘Measurement’”, Physics World 3 (1990) pp. 33-40. Reprinted in J. Bell, Speakable andUnspeakable in Quantum Mechanics, 2nd edition (Cambridge, 2004).D. Home, Conceptual Foundations of Quantum Physics: an overview from modern perspectives (Plenum,1997), chapter 2.R. Penrose, Shadows of the Mind (Oxford University Press, 1994), chapter 6.Presentations by philosophers(*) D. Albert, Quantum Mechanics and Experience (Harvard University Press, 1992), Chapter 4 (pp. 7379) and part of chapter 5 (pp. 80-92).T. Maudlin, “Three Measurement Problems”, Topoi 14 (1995) pp.7-15.M.Redhead, Incompleteness, Nonlocality and Realism: a Prolegomenon to the Philosophy of QuantumMechanics (Clarendon Press, 1989), chapter 2.S. Saunders, “What is the problem of measurement?”, Harvard Review of Philosophy, Spring 1994, pp. 422; online at ers.pdf.(*) D. Wallace, “What is orthodox quantum mechanics?”1, forthcoming in Ontology Studies – OutstandingPapers from the San Sebastian International Congresses of Ontology. https://arxiv.org/abs/1604.059731But see also M. Gilton, “Whence the eigenstate-eigenvalue link?” (Studies in History and Philosophy of ModernPhysics 55 (2016) pp. 92-100), which corrects one overreach in this paper.7

5. State-eliminativist hidden variable theories (aka Psi-epistemic theories)Can we regard the quantum state rather like the probability distributions of classical statistical mechanics,so that the true physics is given by some underlying “hidden-variable” theory? (Approaches like this areoften called “psi-epistemic” in the literature; I find that term misleading, as it conflates the general ideathat the quantum state can be thought of as a probability distribution over hidden variables, with the morespecific idea that those probabilities should be thought of as epistemic rather than, say, as relativefrequencies or similar.)Interconnections This class of interpretations tends to downplay the role of the observer, as opposed to theCopenhagen interpretation and its descendants, but the boundary between them is blurryA very different class of theories are also called “hidden-variable theories”; in this class, whichincludes the de Broglie-Bohm theory and the modal interpretation, the state is not analysed as aprobability distribution but is a part of the theory alongside the hidden variables.General discussions(*) R. Spekkens, “In defense of the epistemic view of quantum states: a toy theory”, Physical Review A 75(2007) 032110.S. Bartlett, T. Rudolph, and R.Spekkens, “Reconstruction of Gaussian quantum mechanics from Liouvillemechanics with an epistemic restriction”, Physical Review A 86 (2012) 012103.N. Harrigan and R.Spekkens, “Einstein, incompleteness, and the epistemic view of quantum states”,Foundations of Physics 40 (2012), p.125.M. Liefer, state-be-interpreted-statistically/ (2011).D. Wallace, “Inferential vs. Dynamical Conceptions of Physics”, in O. Lombardi et al (eds.), What isQuantum Information? (Cambridge University Press, 2017). http://arxiv.org/abs/1306.4907.H. Brown, “The reality of the wavefunction: old arguments and new”. Forthcoming in Ontology Studies –Outstanding Papers from the San Sebastian International Congresses of -contextuality and the (Bell)-Kochen-Specker theoremThe so-called “Kochen-Specker theorem” (a very similar result was previously p

Engaging Buddhism: Why Buddhism Matters to Contemporary .
While philosophy is, among contemporary academic disciplines, unique in containing its own history as a subspeciality, that history is too often focused on the history of . Asian philosophy; Indian Philosophy; African philosophy, etc. European philosophy is just "philosophy," the unmarked, privileged case, the "core" as it is sometimes put. 6 .
6m ago
22 Views

MASTER OF ARTS IN PHILOSOPHY
30,000 e-books on philosophy, with an emphasis on classical German philosophy, contemporary French philosophy, medieval Islamic philosophy and theology. The books are available in their original languages, as well as in translat
5m ago
27 Views