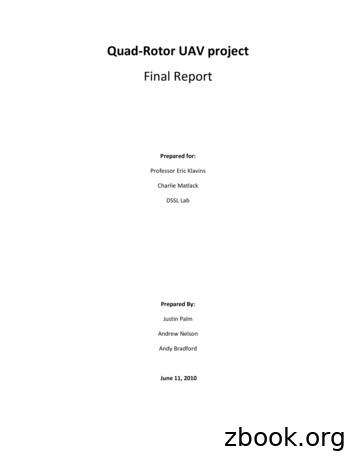 Executive SummaryQuad rotor UAV Project: final report is the final milestone report for EE 449: Controls System Design. Aquad rotor test bed has been built that utilizes an infrared vision system to track the position of thevehicle. In order to have a stable system, the quad rotor dynamics are quantified and a controllerdesigned to meet the performance specification of a 10 second step response.While the system simulation shows results that meet the above requirement, the systemimplementation has proven unsuccessful. An error analysis of the problem reveals a non-linear mappingbetween the motor control input and the angular velocity of the rotor blades. This fact combined withan to small of a resolution for pulse-width modulation results in a range of velocities that cannotrespond to the perturbation of hovering conditions.Further research is has been conducted on the problem and is linked specifically to the opto-isolatorbeing driven with too high of a voltage giving a fall time that is far too slow. Given additional time andpatience, the problem could be fixed by replacing the opto-isolator with a faster device and using amicro controller capable of higher PWM resolution.2

Project DescriptionThe quad rotor UAV project is was originally selected because of the complexity and wow factor. Therehave been a few other colleges in the world who are dedicating enormous resources to similar projects.Being part of a team that establishes a working test bed for the University of Washington has been agreat experience. The project itself is straightforward: using a hobby quad rotor frame, design, build,and test hardware and software control structure that uses feedback to achieve autonomous flight.Actual implementation has proved to be not quite as straightforward. The quad rotor project is a veryambitious task to complete in ten weeks. The trade off in the complexity of the project is enormousintellectual gains.CustomerOur customer for this project is Professor Mehran Mesbahi who heads up the DSSL lab here at theUniversity of Washington. His lab focuses on numerous areas of controls in engineering such asguidance, navigation and control of both single and multi-platform aerial (and space) systems. Ourcustomer requested that we design a control system able to autonomously fly a quad rotor to a specificlocation, or waypoint, in 3D space utilizing the overhead Vicon positioning system.Project PlanThe project plan was divided into five major milestones each spaced approximately two weeks apart.1)2)3)4)5)Project Description and Plan of WorkSystem ModelController DesignController Implementation / Hardware / SoftwareProject DemonstrationsThe sequence that we met these milestones was out of sequence with the required milestones.Experience told us to get the hardware done as soon as possible as this is often requires a lot ofdebugging time. By doing so, and because of unforeseen difficulties, we fell behind slightly with theSystem Modeling and Controller design. After working closely with our customer and other professionalswe were able to complete the milestones only slightly behind schedule. The final implementation wastime stressed toward the end of the quarter and we failed to achieve autonomous hover. In lieu of this,we have done extensive failure analysis and is included later in the report under sections ExperimentalData and Further Development.Literature review and related workThe quad rotor project required extensive research into similar systems. By reviewing others work, weused this insight to develop our system. To this end, research papers from various quadrotor groupswere used as guides in the early development of the dynamics and control theory.Quad rotor platforms used in research remain somewhat the same, having four electric motors pointedvertically upwards and equally spaced in a square fashion. However, there were some groups whom6

designed their own platforms, where as commercial models available to the consumer were theDraganFlyer, the X-UFO and the MD4-200.One such platform is the Stanford Test-bed of Autonomous Rotorcraft for Multi-Agent Control(STARMAC) uses a modified DraganFlyer IV quad rotor (the same frame as we are using). Their systemuses LQR techniques as well as Integral Sliding Mode (ISM) control. The STARMAC also incorporated anonboard micro controller/IMU.The single most valuable resource to us during this project was the work that Brain Hemstra did whileworking with the DSSL lab last year. Brian’s master thesis entitled Linear Quadratic Methods Applied toQuad rotor Control provides a working simulation that we used to gain insight and understanding whileworking through the complicated dynamics of the quad rotor system. Another big advantage of havingthis resource is that many of the parameters of interest (thrust, inertia, etc) were already wellquantified.System modelIn this section, the quad rotor system’s multiple inputs and outputs will be identified and the equationsof motion governing the dynamics of the system will be derived. The first step is to identify the plant andthe inputs and outputs of the plant itself and then to establish the framework to derive the equations ofmotion using Newton’s Laws.Plant IdentificationFigure 1: Plant IdentificationFigure 1 shows the inputs and outputs of the plant. The inputs are angular velocities in radians persecond and the output is a 12x1 vector which is discussed below. The angular velocity is convertedthrough an airfoil blade. The Dynamics of the airfoil blade is included in the dynamics of the plant. Inorder to control the angular velocity of the blades, we must control the voltage applied to the motors inthe quad rotor. Figure 2 below shows how the motors can be controlled through pulse-widthmodulation (PWM) the axel of the motor is geared with a five to one reduction gear. The result ofvarying duty cycles of the motor drive stage results in varying angular velocities.7

Figure 2: Controlling angular velocity via PWMReference FrameThe quad rotor system operates in two coordinate frames: inertial and body. The inertial frame (alsoreferred to as the earth frame) is the coordinate axis where Newton’s Laws apply. To complicatematters, the countering forces to achieve hover are applied to the body frame which is fixed to the quadrotor itself and is allowed to rotate and translate. This dual-frame coordinate system is shown belowalong with a free body diagram of the quad rotor system.kT1T2zPT4liT3jGryxFigure 3: Coordinate Axis and Free-body DiagramNow that the coordinate reference frame is identified we can begin to represent the systemmathematically. The Mechanism through which the quad rotor can be controlled is thrust provided by8

airfoil blades attached to four independently controllable motors attached at a fixed distance (l) fromthe center of the quad rotor (P). By varying the relative magnitudes of the thrusts, we can control theattitude (yaw, pitch, roll) and position (X,Y,Z) of the system in inertial coordinates. As mentionedpreviously, the thrust forces are applied in the body frame; therefore, transformations must be made.Model StatesIn the previous subsection, we showed how the quad rotor system can be described using bodycoordinates and inertial coordinates. Now we define the states of the system that include a mixture ofbody and inertial components comprised of translational and rotational positions and velocities.Referring to Figure 1, we define the following vectors:𝑢𝑣𝑏 𝑣 𝑤𝑝𝜔𝑏 𝑞 𝑟𝜙Φ𝑖 𝜃 𝜓𝑥𝑟 𝑖 𝑦 𝑧translational velocity in the body framerotational velocity in the body frameattitude (yaw,pitch,roll) in the inertial frameposition in inertial frame𝑇Combining the four vectors defined above yields the state vector 𝑥 𝑣 𝑏 𝜔𝑏 Φ𝑖 𝑟 𝑖 which is used inthe derivation of the quad rotor dynamics shown in the appendixState-Space RepresentationThe basic form of the state space equations are as follows:𝑥̇ 𝐴𝑥 𝐵𝑢𝑦 𝐶𝑥 𝐷𝑢Where u is a vector of system inputs and x is the state vector. Because the quad rotor is an unstablesystem, we must linearize the system about an operating point. To achieve a hovering condition, weeffectively want all the states to be zero. Stated differently, if we think of the initial starting condition atsome position in space (X,Y,Z) and call that point zero, all the allowed states should also be zero. This isthe easiest point to linearize about since many of the elements after the linearization process go toeither zero or one.In order to expedite the linearization process, Matlab is used by creating a model of the system thatincludes the non-lineari

UAV TASK-FORCE Final Report
UAV Task-Force Final Report Chapter 1 3 11 May 2004 1 INTRODUCTION 1.1 BACKGROUND The Joint JAA/EUROCONTROL initiative on UAVs (hereinafter addressed by “UAV Task-Force” or “UAV T-F”) was established in September 2002 on the basis of a joint decision of the JAA and EUROCONTROL governing bodies. This decision was taken in reaction to the growing European UAV Industry and their .
4m ago
8 Views

Design, Fabrication And Testing Of A Novel Uav: Capstone .
design project done by the students of the department as part of their capstone class es MET460 and MET461. The main focus of this project is the design, development, analysis, fabrication and testing of an Unmanned Aerial Vehicle (UAV). The UAV will be c apable
3m ago
13 Views