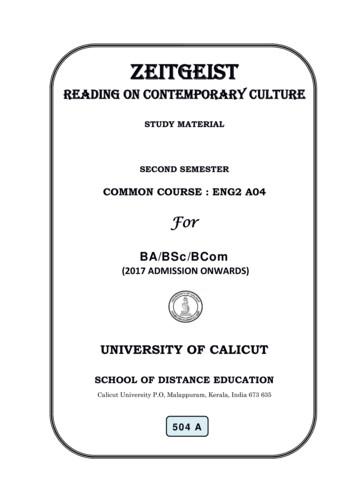 School of Distance EducationMODULE IIndian Constitution and SecularismSHOULD THE ASSASSIN OF GANDHI BE KILLED?Pearl S. BuckIntroductionPearl Sydenstricker Buck was an American writer and novelist. As the daughter ofmissionaries she spent most of her life before 1934 in China. Her novel The Good Earth was thebest selling fiction in 1931 and 1932. In 1938 she was awarded the Nobel Prize in Literature “forher truly epic descriptions of peasant life in China and for her biographical masterpieces.”On 30th January 1948 India witnessed the tragic assassination of Mahatma Gandhi at the BirlaHouse in New Delhi. Naturam Vinayak Godse was his assassin. Gandhi’s greatest weapon wasnon-violence. His life and teachings touched people outside India and inspired movements forcivil rights and freedom across the world. He has inspired people around the world and PearlS.Buck, the American writer and novelist was one among them. In her words: “Mahatma Gandhicame and stood at the door of India’s destitute millions, clad as one of themselves.”I. Answer the following questions1. According to Pearl S.Buck, is the only commonsense of human beings.a. Violence b. Fearlessness c. non violence d. SilenceAns: Non-violence2. Men wind confusion and entanglements because they are afraid of .a. Violence b. NonViolence c. Simple Truth d. ConscienceAns: Simple truthII. Answer the following questions in a sentence or two:1. What is more powerful than bombs and weapons?The force of a great good spirit.2. Why did the people believe in Gandhi?He put his words into practice and people saw this was true.3. What does the world long for?The world longs for peace and peacemakers4. Who are the lot referred to as the lovers of violence?The ignorant, stupid, the inventors of atom bombs, the generals, the captains, the sergeantsand the little soldiers.5. What is the fate of those who rebel against the lovers of violence?The warmongers will end them in the pull of a trigger, in a flash or in a blast.III. Answer the following questions in a paragraph:1. Why do the inventors of atom bombs love violence?Atom bombs bring epic destruction. It is the stupid, ignorant man’s response to all that hefears, all that he hates and to all those who rebel against him. They think the world is a betterplace when everything is replied with ‘war’. The inventors of atom bombs are those who use it oninnocent people and powerless nations. Mahatma Gandhi strongly rejected protests by means ofZEITGEIST-Reading on Contemporary CulturePage 5

School of Distance EducationPREAMBLE TO THE CONSTITUTION OF INDIAIntroductionThe Preamble of India is totally different from the preamble of other countries as it iselaborate, and the main reason behind it is that it gives a brief view of who made the constitution,what is its source ,and what are the sanctions behind it. What is the nature of the polity which issought to be established by the Constitution and what are its goals and objective?The Preamble does not grant any power but it gives direction and purpose to theConstitution .It outlines the objective of the whole Constitution. The Preamble contains thefundamental of constitution. As regard the nature of the Indian Polity, the Preamble to theConstitution declares India to be a Sovereign, Socialist, Secular Democratic Republic. The termSovereign denotes that India is subject to no external authority and that the state has power tolegislate on any subject in conformity with constitutional limitations. The term Democraticsignifies that India has a responsible and parliamentary form of government which is accountableto an elected legislature. The Supreme Court has declared democracy as the basic feature of theConstitution. The term Republic denotes that the head of the state is not a hereditary monarch, butan elected functionary.As to the grand objectives and socio-economic goals, the achieving of which the IndianPolity has been established, these are stated in the Preamble. These are to secure all its citizenssocial , economic and political justice; liberty of thought; equality of status and opportunity, andto promote among them fraternity so as to secure dignity of the individual and unity and integrityof the Nation.ExercisesI. Answer the following questions:1. What does the term “preamble” mean?a. Conclusion b. preface c. post script d. closing commentAns: Preface2. Who was the chairman of the Constituent Assembly?a. Dr. S. Radhakrishnanb. Dr. Rajendra Prasadc. Dr. B.R Ambedkard. H.C MukherjeeAns: Dr. Rajendra Prasad3. The Constitution of India derives its authority froma. The Constituent Assembly b. The drafting Committeec. The People of Indiad. None of theseAns: The people of India4. The preamble to Indian Constitution has been amended by the ConstitutionalAmendment Act-1976a. 44thb. 46thc. 42ndd. 62ndAns: 42ndII. Answer the following in a sentence or two:1. Why is the Preamble called the ‘identity card of the Constitution’?ZEITGEIST-Reading on Contemporary CulturePage 7

School of Distance Educationguaranteed to the individuals through the provision of Fundamental Rights, which are enforceablein the court of law.The unity and integrity of the nation is sought to be secured by the use of the word‘Fraternity’ in the Preamble and by the provisions of fundamental duties and single citizenship inthe Constitution. The use of these words in the Preamble shows that it embodies the basicphilosophy and fundamental values on which the Constitution is based. It very well reflects thedreams and aspirations of the founding fathers of the Constitution. The claim that the constitutionis derived from the people is justified because of its broad-based popular acceptance ever since itcame into force.The very first sentence of the preamble declares India to be a Sovereign SocialistDemocratic Republic. The term ‘sovereign’ implies that India is internally supreme and externallyfree. State authority of India is supreme over all men and all associations within India’s territorialboundary. This is India’s internal sovereignty. The terms socialist and secular were added to thePreamble by 42nd amendment in 1976. Secularism is a glaring necessity in India’s socio-politicalcontext. Inhabited by people of all faiths, it is imperative that India does not accept any religion asthe state-religion. India’s secularism ensures that religious minorities do not suffer from a sense ofinferiority as do the minority communities in Pakistan or Bangladesh. The terms ‘Democratic’and ‘Republic‘ in the Preamble are very important. India’s aim is to build up not only ademocratic political system but also a democratic social system.India joined the Commonwealth by her “free will.” In India popular elections givelegitimacy to our rulers. A system is republican where no office of the state is held on the basis ofhereditary prescriptive rights. In India every office of the state from the highest to the lowest isopen to every citizen. Any citizen may occupy any office on the basis of merit. Thus, headship ofthe state is not hereditary as in England, nor is it based on military power as in dictatorial regimes.To build up an ideal democracy, the Preamble emphasizes justice, liberty, equality andfraternity as political ideals. These ideals listed in the Preamble are, according to Prof. Barker, thequintessence of western democracy. The ideal of justice implies a system where individuals canrealize their full potentialities. In the view of our founding fathers it is not enough that there ispolitical or legal justice. Political and legal justice is a myth unless accompanied by social andeconomic justice. Social justice implies that all social discriminations like caste differentiationmust be ended. Economic justice implies that economic exploitations should be ended. However,social and economic justice still remain unrealized dreams. The ideal of liberty aims at ensuringthese freedoms which make men really free. Liberty to be meaningful must mean liberty ofthought, expression, belief, faith and worship.The idea of equality is aimed at removing discriminations between citizens. This isparticularly important in the Indian society, vitiated by caste system and untouchability. But hereagain one should remember that equality in the social arena is bound to be empty unlessaccompanied by economic equality. Finally, fraternity as an ideal is sought to be fostered toensure the dignity of the individual and unity of the nation. One should however note that afraternal feeling among Indians would grow only in proportion to the realization of the ideals ofjustice, liberty and equality.ZEITGEIST-Reading on Contemporary CulturePage 9

School of Distance EducationTOBA TEK SINGHSaadat Hasan MantoIntroductionSaadat Hasan Manto is an Urdu short story writer who wrote much about the communalkillings of 1947. His stories are best known to have depicted the partition of the sub continentimmediately following independence in 1947. He produced 22 collections of short stories, anovel, five series of radio plays, three collections of essays, two collections of personal sketches.Much of his writings are translated into English.SummaryThe greatest of Manto’s 1947 stories is ‘Toba Tek Singh’. The madness that has gripped thesubcontinent permeates even the lunatic asylums and the great decision makers of the twocountries decide that since there has been such a transfer of populations as well as assets, it is onlylogical that non-Muslim lunatics should be reported to India and Muslim lunatics in Indiatransferred to Pakistan. On the day of the great exchange, there is only one man, Bishan Singh,who refuses to leave because he wants to stay where he was born and where his family lived, thetown of Toba Tek Singh in Pakistani Punjab. The exchange takes place at the common border ofthe two countries. They try to push him across the line into India, but he does not move becausehe wants to live neither in India nor in Pakistan, but in Toba Tek Singh. They let him staystanding in no-man’s-land because they tell each other that he is only a harmless old man. As themorning breaks, Bishan Singh screams just once, falls and dies. “‘There, behind the barbed wire,on the other hand lay Pakistan. In between on a bit of earth, which had no name, lay Toba TekSingh.”ExercisesI. Answer The Following Questions:1. In which Pakistani city was the lunatic asylum situated?a. Lahore b. Karachi c. Islamabad d. RawalpindiAns: Lahore2. Roop Kaur was the of Bishan Singh.a. Wife b. mother c. daughter d. Daughter-in –lawAns: Daughter3. What was the real name of Toba Tek Singh?a. Kishan Singhb. Viswambar Singhc. Bishan Singhd. Kishon Singh AaronAns: Bishan Singh4. What is Zamindar in Toba Tek Singh?a. A newspaperb. A magazineAns:A newspaperZEITGEIST-Reading on Contemporary Culturec. A journald. A bookPage 10

School of Distance EducationII. Answer the following questions in a sentence or two:1. Why did one of the lunatics climb up a tree?He was disoriented by the confusion created out of Hindustan-Pakistan.2. Who is Qaid –e-Azam?Mohammed Ali Jinnah3. Who declared himself to be Qaid-e-Azam, Muhammed Ali Jinnah?A Muslim from Chiniot whose name was Muhammed Ali declared himself to be Qaid-eAzam. He was an active member of the Muslim League.4. Why did Hindu lawyer in Asylum go mad?He loved a girl and when Partition came; Amritsar, where his beloved was, belonged toIndia and he was in Lahore, Pakistan.5. What was Bishan Singh’s question to the man who believed that he was God?Bishan Singh asked him where was Toba Tek Singh, in Pakistan or India.6. How did the Muslim friend from Toba Tek Singh who came to visit Bishan Singh introducehimself?He did not introduce himself. He started the conversation talking about Bishan Singh’sfamily. It is understood that he is a close friend of the family.7. What was the response of the Anglo-Indian inmates of the asylum, when they realized theEnglish had giv

Publicity Contact: A ZEITGEIST FILMS RELEASE
A ZEITGEIST FILMS RELEASE Theatrical Booking Contact: Clemence Taillandier Zeitgeist Films . resides with his 93-year-old mother in their ancient apartment. The condo debts are mounting, but if Gianni looks after the building manager’s mother . the Satyajit Ray Award at London and the Golden Snail at the
4m ago
6 Views