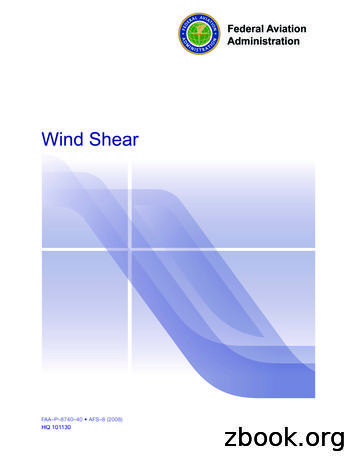 Wind ShearIntroduction“Tonto 55, how do you read?”“55, loud and clear.”It has been a good flight, thinks the Instructor Pilot (IP) as the pilot in front smoothly and efficientlymakes the transition to the Ground Controlled Approach (GCA) final. I enjoy being an instructor ondays like this one.“Tonto 55, begin descent. Slightly above glide path, on course. Seven miles from touchdown.”He is really smooth on this GCA, thinks the IP—just a little trouble getting down to the glide slope.“Slightly above glide path, on course. Five miles from touchdown.”“Slightly above glide path, on course, wind 050, 10 knots. Cleared to land Runway 05. Four miles fromtouchdown.”The IP thinks—This approach is not taking much thrust. Maybe they tuned up the engines last night.“On glide path, on course. Two miles from touchdown.”“Slightly below glide path. One mile from touchdown.”“Going well below glide path. Well below glide path.”Wow, thinks the IP, the bottom dropped out of this approach. Add power. “I’ve got it!”Light burners, light!“Tonto 55, too low for safe approach. Climb immediately! Contact departure.”The IP thinks again—Did we hit those lights?“Uh, GCA, Tonto 55, on the go. Going to tower.”“What happened?” asks the pilot in training.What happened, indeed? How could two experienced pilots let themselves get so far behindthe aircraft that they crashed into the approach lights on a perfectly clear day? A few yearsago, the answer would have been a simple “pilot error.” People would shake their heads andgo on as usual. Now, thanks to increased research and experience, we are more aware ofthe complex problem of wind shear. This document explains the wind shear phenomenon.Learning about the dangers wind shear can present might save your life.

Wind ShearWhat Is Wind Shear?Wind Shear DefinedWind shear is a change in wind speed and/or direction over a short distance. It can occur either horizontally orvertically and is most often associated with strong temperature inversions or density gradients. Wind shear canoccur at high or low altitude. Note: This document discusses only low-altitude wind shear.Four common sources of low-level wind shear are—1. Frontal activity.2. Thunderstorms.3. Temperature inversions.4. Surface obstructions.Frontal Wind ShearNot all fronts have associated wind shear. In fact, shear is normally a problem only in those fronts with steepwind gradients. As with so many things associated with weather, there is no absolute rule, but a couple of cluestell you that wind shear may occur: The temperature difference across the front at the surface is 10 oF (5 oC) or more. The front is moving at a speed of at least 30 knots.You can get clues about the presence of wind shear during the weather briefing by checking these two factors.Ask the briefer and, if these factors are present, be prepared for the possibility of shear on approach.

Wind ShearWind Shear From ThunderstormsWind shear is just one of the many unpleasant aspect of thunderstorms. The violence of these storms and theirwinds are well documented. The two worst problems outside actual storm penetration are shear related. These arethe “first gust” and the “downburst.” The rapid shift and increase in wind just before a thunderstorm hits is thefirst gust.Figure 1. First gust hazards.Figure 2. Downdrafts. Strong downdrafts from a dissipating thunderstorm cell spread horizontally as theyapproach the ground. This wedge ofcold air provides a lifting force onsurrounding warm air, which may besufficient to initiate the formation ofnew thunderstorm cells.Gusty winds are associated with mature thunderstorms and are the result of large downdrafts striking the groundand spreading out horizontally. These winds can change direction by as much as 180 degrees and reach velocitiesof 100 knots as far as 10 miles ahead of the storm. The gust wind speed may increase by as much as 50 percentbetween the surface and 1,500 feet, with most of the increase occurring in the first 150 feet. The implications fora shear on approach in such a case are obvious.

Wind ShearThe other wind problem mentioned previously, the downburst, is also downdraft related. It is an extremelyintense, localized downdraft from a thunderstorm. This downdraft exceeds 720-feet-per-minute vertical velocityat 300 feet AGL. The power of the downburst can actually exceed aircraft climb capabilities, not only those oflight aircraft, but, as is documented in one case, even a high-performance Air Force jet.The downburst is usually much closer to the thunderstorm than the first gust, but there is no absolutely reliableway to predict the occurrence. One clue is the presence of dust clouds, roll clouds, or intense rainfall. It would bebest to avoid such areas.Wind Shear From Temperature InversionsPilots who have flown in the Southwest, Southern California, or Colorado are familiar with this weather pattern.Overnight cooling creates a temperature inversion a few hundred feet above the ground. When coupled with highwinds from what is known as the low-level jet stream, this inversion can produce significant wind shear close tothe ground.Figure 3. Temperature inversions.Turbulence at boundary betweencalm, cold air and a low-level warmair jet stream.One particularly bothersome aspect of temperature inversion shears is that as the inversion dissipates, the shearplane and gusty winds move closer to the ground. In some areas of the Southwest, a 90-degree change in direction and 20- to 30-knot increases in surface winds in a few minutes are not uncommon. Obviously, such a shiftwould make an approach difficult at best.Wind Shear From Surface ObstructionsWind shear from surface obstruction is generally associated with hangars or other buildings near the runway. Thesudden change in wind velocity can seriously affect a landing.Another type of surface obstruction—mountains—can also affect wind shear. Some airfields are close to mountain ranges, and mountain passes are close to the final approach paths. Strong surface winds blowing throughthese passes can cause serious localized wind shear during the approach. The real problem with such shear is thatit is almost totally unpredictable in terms of magnitude or severity. A pilot can expect such shear whenever strongsurface winds are present.Types of Wind ShearWind shear can be divided into horizontal and vertical shears. Although both components can affect an aircraftsimultaneously, it is easier to discuss each separately.Horizontal Wind ShearHorizontal shear occurs when the flight path of an airplane passes through a wind shift plane. Figure 4 showshow such a penetration would appear as an aircraft crosses a cold front.

Wind ShearFigure 4. Windshift.Vertical Wind ShearVertical wind shear is the type most often associated with an approach. Vertical shear is normal near the groundand can have the most serious effect on an aircraft. The change in velocity or direction can drastically alter lift,indicated airspeed, and thrust requirements. It can exceed the pilot’s capability to recover.Effects of Wind Shear on AircraftIn its many forms, wind shear can change a routine approach into an emergency recovery in a matter of seconds.An aircraft is affected by the change in wind direction/velocity because the wind also changes the aircraft motionrelative to the ground. We will look at the effects of wind shear on an aircraft and on pilot techniques for copingwith a shear situation.Situation 1—High Enough for RecoverySuppose that an aircraft is stabilized on an instrument landing system approach and encounters a shear thatresults from a decreasing head wind. In such a case, a transient loss of airspeed and lift causes the aircraft todescend. The pilot must compensate for this loss of lift. The critical factor is whether the aircraft has sufficientaltitude to complete a recovery.In Figure 5, the shear occurs at an altitude high enough for the pilot to complete the recovery (just past the finalapproach fix, for example).As the aircraft passes through the shear level, airspeed and lift are lost. The aircraft starts to sink and drops belowthe glide path. The pilot recognizes this development as a deviation and corrects the situation with increased pitchand power. Very often, the correction is too large, so the aircraft overshoots the desired airspeed and glide path.Because the pilot has sufficient altitude to correct, however, the aircraft can be landed safely.

Wind ShearSituation 3—Aircraft Lands ShortThe situation illustrated in Figure 7 is the most serious. When the altitude of the encounter is too low to make arecovery, or the shear itself is strong enough to overcome aircraft performance capability, the aircraft lands short.When the aircraft crosses the shear plane and loses the tailwind, lift increases and the aircraft climbs above theglide path. As in the headwind situation, the pilot’s reaction can mean an overcorrection. The worst case hereis the one similar to Figure 6: the overcorrection leads to a descent below the glide path, but without enoughaltitude to correct. The result is the classic high sink rate, hard landing.Figure 7. Strong shear at lowaltitude prevents recovery. Loss of airspeed is equivalent toshear value. Lift is lost; the aircraft pitchesdown and drops below the glideslope. The pilot applies power to regainairspeed and pulls the nose upto climb back to the glide slope;engine spool-up requires time. The aircraft is in high drag configuration with altitude critical. Increasing the angle of attack produces onlya slight or momentary increase in lift, accompanied by a tremendous increase in drag as the maximum valueof the lift/drag ratio is exceeded. The result is a momentary arrest of the descent with decreasing airspeed,followed by a large increase in an already high descent rate. The pilot's only hope is to pull on the yoke and push on the throttles. Pilot action is too late; the aircraft crashes short of the runway.The most hazardous form of wind shear is encountered in thunderstorms. The severe, sudden wind changes canexceed the performance capabilities of many sophisticated aircraft. Numerous documented cases of aircraftmishaps have been directly related to encounters with thunderstorm wind shear.How To Cope With Wind ShearHere are the best ways a pilot can prevent a hazardous encounter with wind shear: Know wind shear is there. Know the magnitude of the change. Be prepared to correct or go around immediately.

Wind ShearAbout This SeriesThe purpose of this series of Federal Aviation Administration (FAA) safety publications is to provide the aviationcommunity with safety information that is informative, handy, and easy to review. Many of the publications inthis series summarize material published in various FAA advisory circulars, handbooks, other publications, andaudiovisual products developed by the FAA and used by the FAA Safety Team (FAASTeam) for educationalpurposes.Some of the ideas and materials in this series were developed by the aviation industry. The FAASTeam acknowledges the support of the aviation industry and its various trade and membership groups in the production of thisseries.Comments regarding these publications should be e-mailed to [email protected] copies of this publication may be downloaded or printed at http://FAASafety.gov.

Four common sources of low-level wind shear are— . tion and 20- to 30-knot increases in surface winds in a few minutes are not uncommon. Obviously, such a shift would make an approach difficult at best. . the overcorrection leads to a descent below the glide path, but without enough alt

Recommended Practices for the Use of Sodar in Wind Energy .
For application in wind energy resource assessment, sodar is primarily used to (1) measure the characteristics of the wind shear profile at heights above ground where wind turbine rotors operate, and/or (2) compare the wind conditions at selected sites relative to one or more reference wind measurement locations (typically meteorological masts).
8m ago
12 Views

A Timoshenko beam theory with pressure corrections for .
solutions to the theory of elasticity. The second approach is to use the shear correction factor to account for the di erence between the average shear or shear strain and the actual shear or shear strain using exact solutions to the theory of elasticity. Timoshenko(1922) originated the frequency-matching approach. He calculated the
8m ago
7 Views
Popular Tags
Recent Views