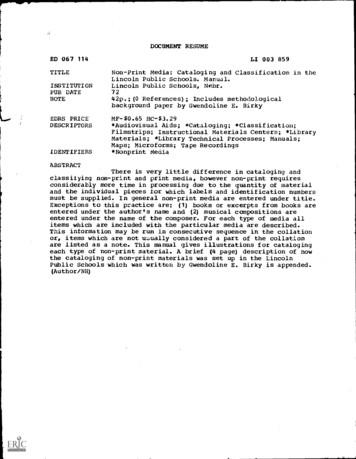 DOCUMENT RESUMEED 067 114TITLEINSTITUTIONPUB DATENOTEEDRS PRICEDESCRIPTORSIDENTIFIERSLI 003 859Non-Print Media: Cataloging and Classification in theLincoln Public Schools. Manual.Lincoln Public Schools, Nebr.7242p.;(0 References); Includes methodologicalbackground paper by Gwendoline E. BirkyMF- 0.65 HC- 3.29*Audiovisual Aids; *Cataloging; *Classification;Filmstrips; Instructional Materials Centers; *LibraryMaterials; *Library Technical Processes; Manuals;Maps; Microforms; Tape Recordings*Nonprint MediaABSTRACTThere is very little difference in cataloging andclassifying non-print and print media, however non-print requiresconsiderably more time in processing due to the quantity of materialand the individual pieces for which labels and identification numbersmust be supplied. In general non-print media are entered under title.Exceptions to this practice are: (1) books or excerpts from books areentered under the author's name and (2) musical compositions areentered under the name of the composer. For each type of media allitems which are included with the particular media are described.This information may be run in consecutive sequence in the collationor, items which are not uLAially considered a part of the collationare listed as a note. This manual gives illustrations for catalogingeach type of non-print material. A brief (4 page) description of howthe cataloging of non-print materials was set up in the LincolnPublic Schools which was written by Gwendoline E. Birky is appended.(Author/NH)

INTRODUCTIONThere is very little difference in cataloging and classifying nonprint and print media, however we find that non-print requires considerablymore time in processing due to the quantity of material and the individualpieces for which labels and identification numbers must be supplied.In general non-print media are entered under title.Exceptions tothis practice are 1) books or excerpts from books are entered under theauthor's name and 2) musical compositions are entered under the name ofthe composer.For each type of media we attempt to describe all items which are included with the particular media; e.i. number of slides, prints, discs,etc., col. or b&w, size, and teacher and/or student guides or other teachThis information may be run in consecuing aids which may be included.tive sequence in the collation or, items which are not usually considereda part of the collation are listed as a note.When two producers are responsible for the media, both are named inWhen media is received and has the same title entrythe title statement.as material already cataloged but by a different producer we recatalog indicating the producer. This could be handled by cataloging with briefcataloging as is done with books which appear in several editions fromvarious publishers, but usually we do not know that the material will beavailable from different sources when we first catalog it.When media areproduced by a school in our system the card carries the information: Locally produced.The following notes explain some of the practices which have been maderealtive to cataloging certain media.A.Filmstrips.1. Divide sets into single filmstrips when the nature of thecontent does not logically come under one Dewey Decimalclass number.2. Catalog from the title frame of the filmstrip.number of frames and the running time.We omit the3. Check with the Library of Congress cataloges and the Indexto 35mm Educational Filmstrips for notes. Do not take timeto make up notes.Simple notes from the teachers' guidesmay be used. The Elementar y School Librart, edited by MaryGayer is good for notes on certain producers) especiallyWeston Woods.4. Credits are given in the notes providing the person responsible for any part of it is apt to be known because he is aband and/or orchestra conductor; writer; stage, movie, ortelevision personality; etc. This may or may not be a goodpractice since inclusion is determined by the cataloger,who is not always in a position to know how well known certain individuals might be familiar to our users.

5. When cataloging sound filmstrips and slides, if two or morefilmstrips are recorded on one phonodisc or cassette use sideone for the entry.B.Pictures.1. When works of art are entered under the name of the artist,the total number of slides has been omitted so that moremay be added from the particular company as they are purchased.2. Supplied title of [Painting] is not considered a title butonly a descriptive word for the type of work found on theprint.Other descriptors might be: [Print] used for woodblock, stone, etc.[Engraving] [Lithograph][Photograph][Sculpture] etc.3. Pictures as well as slides are first divided into thefollowing categories before cataloging:a.Artists - Name of artistb.Period - Cubismc.Type of art - Pottery, Sculpture, etc.4. When sets of slides or pictures are received which areillustrative of a specific period of art but do not identify the artists, catalog them as a set by period.Example:Cubism.5. For easy location of the picture or slide the accessionnumber is used after the cal] number. See note page 23.C.Records1. Always take the entry from side "1" or "A" of the record.2. Be certain to take the entry off the label on the record sincethe slip case may not carry the same title.3. For sets of records use the series title.1. Musical compositions are entered under composer with a uniformtitle enclosed in brackets at the head of the title so thatall works of the same title may be filed together regardlessof the whims of the producer of the recording.The Lincoln Media Specialists decided to use only one color for allnon-print media because there were not enough color-banded cards to take careof the many forms of non-print and, since we use abbreviated prefixes as apart of the call number multiple colored cards or banded cards seemedredundant. In addition it made the reproduction of non-print catalog cardssimpler by using a single color. Green was the color selected for non-print.The next two pages are illustrative of the cataloging whi,:h iG done forprint and non-print media, thus correlating class numbers and subject headings of all forms of media which are located in the center.4

classifying non-print and print media, however non-print requires considerably more time in processing due to the quantity of material and the individual pieces for which labels and identification numbers must be supplied. In general non-print media are entered under title. Exceptions t

University of Kentucky - UK HealthCare
Manager - Staff Development Office: (859) 323-0433 Fax: (859) 257-4838 Email: rebecca.garvin@uky.edu This Orientation Handbook has been developed to ensure that faculty responsible for students at UK HealthCare have the information necessary for meeti
13d ago
1 Views