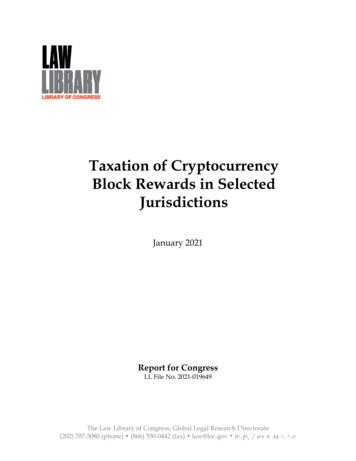 This report is provided for reference purposes only.It does not constitute legal advice and does not represent the officialopinion of the United States Government. The information providedreflects research undertaken as of the date of writing.It has not been updated.

Comparative SummaryLaney ZhangForeign Law SpecialistI. IntroductionThis report by the foreign law specialists of the Law Library of Congress surveys the tax treatmentof new tokens obtained by cryptocurrency mining or staking, often known as “block rewards,”in 31 countries around the globe. It also addresses the tax implications of cryptocurrency tokensacquired through airdrops and hard forks (also referred to as a “chain split”) in variousjurisdictions. This report complements a broader comparative study on regulatory approaches tocryptoassets, including the application of tax laws to cryptocurrency activities, published by theLaw Library in April 2019. 1The report shows that while tax authorities of a number of countries have published guidance onthe taxation of mined tokens such as Bitcoin and other “proof-of-work” cryptocurrencies, only afew specifically address the taxation of tokens received through staking, a term used to describethe process of obtaining reward tokens in the newer “proof-of-stake” cryptocurrencies. Forcountries where no explicit taxation rules on block rewards are available, the report providesinformation such as general taxation rules, proposed legislation, official statements, andcomments from legal scholars and tax experts, which may be helpful in understanding how blockrewards may be treated for tax purposes.Cryptocurrency is variously treated by the surveyed countries as investment property, a financialinstrument, an intangible asset or property, a financial asset, a commodity, etc., as the tablebelow shows. Italy treats exchanges of cryptoassets like exchanges of foreign fiat currenciesfor tax purposes. The taxation of cryptocurrency is dependent not only upon its nature, but alsoon other factors such as ho w it is acquired or used.Treatments of CryptocurrencyJurisdiction(s)investment propertyDenmark, Norway, Finlandcapital assetAustraliafinancial instrumentGermanyintangible assetLuxembourg, Switzerlandintangible propertySingaporeinvestment capitalSwedenpropertyNew Zealandfinancial assetVenezuelacommodityCanada1 Law Library of Congress, Regulatory Approaches to Cryptoassets in Selected Jurisdictions (Apr. 2019),https://perma.cc/DW4V-C52E.The Law Library of Congress1

Taxation of Cryptocurrency Block Rewards: Comparative SummaryII. Taxation of Tokens Received Through MiningSpecific rules or guidance on the application of major types of taxes, including income, capitalgains, and value-added tax (VAT), to tokens received through mining have been located inAustralia, Canada, Denmark, Finland, France, Germany, Israel, Italy, Japan, Jersey, NewZealand, Norway, Singapore, Sweden, Switzerland, and the United Kingdom (UK).Most of these countries provide different tax treatment to small-scale cryptocurrency mining byindividuals (often treated as a hobby) and large-scale or commercial mining activities. In Finlandand Denmark, mined cryptocurrencies are taxed as income derived from a hobby unless themining is done on a commercial scale. Norway taxes income from mining and stakingcryptocurrencies when done on a commercial scale and taxes profits from their sale, while the taxauthority typically treats mining as a hobby, the income from which is not taxed. In Sweden,mined cryptoassets on a personal scale are subject to income tax based on the current marketvalue at the time they are mined as personal income from employment, while large-scale miningmay be considered commercial activity and is taxed as such.Some surveyed countries have clearly stated that reward tokens generated from mining byindividuals on a small scale or as a hobby are not taxable until their disposal or are not taxable atall. In Australia and Canada, where a person mines cryptocurrency as a hobby, mined tokens arenot taxable until their disposal, with tax then payable on the capital gains. The government ofJersey states that income generated from mining cryptoassets on a small or irregular scale isgenerally not to be considered as a trading activity, and that mining alone does not make a personliable for income tax. Singapore specifies that a miner’s profits from the rewarded paymenttokens is taxed at the point of disposal of the tokens and not when the tokens are mined, becausewhile the miner is entitled to a right to own a payment token at the point of successful mining,no income is derived by merely holding the payment token. Singapore presumes an individualengaging in mining activities to be undertaking the activity as a hobby and does not tax the gainsfrom the individual’s sale of the mined payment tokens, unless the individual shows a habitualand systematic effort to make a profit from the activities.In other countries, even where mining is not a business or a profit-making scheme, a person mayneed to pay income tax on the mining rewards upon receipt. In New Zealand, any profit madefrom subsequently selling or exchanging the mining rewards is also taxable, if this was thepurpose for mining them. In the UK, if the mining activity does not amount to a taxable trade,the value at the time of receipt of any cryptoassets awarded as a result of mining will be taxed asmiscellaneous income. The UK may also impose capital gains tax on individuals who minecryptoassets when they are later sold.The tax authority of Japan has stated that virtual currency acquired by mining is taxed on itsmarket value at the time of acquisition. In France, while non-professional investors are taxed onthe value added of their cryptocurrency when they sell it, professional miners are taxed on thevalue of the cryptocurrency when they receive it. They can also be taxed again on the value addedwhen they sell the same cryptocurrency into fiat currency later on.The Law Library of Congress2

Taxation of Cryptocurrency Block Rewards: Comparative SummaryThe income tax treatment of mining is currently under discussion in Germany, but the federalministry of finance held that mining is a nontaxable transaction under VAT law. In Italy, whilethe exchange of virtual currencies is not subject to VAT, the receipt of new tokens via mining issubject to VAT. Similarly, in Israel, while individual investors in virtual currencies are not liablefor VAT, those engaging in mining will be classified as dealers and could be subject to VAT. Anumber of the other surveyed countries, including Australia, Chile, Colombia, Malta, NewZealand, Norway, Singapore, Switzerland, and Spain, have addressed the treatment ofcryptocurrencies under the VAT or goods and services tax through guidance or the introductionof specific rules.III. Taxation of Tokens Received Through StakingTax authorities of Australia, Finland, New Zealand, Norway, and Switzerland have addressedthe tax treatment of tokens received through staking.For tax purposes, staked tokens are treated differently from mined tokens in Australia andFinland. In Australia, tokens acquired through mining cryptocurrencies as a hobby do not needto be reported as income and taxes are only payable upon their disposal through the capital gainstax system. Tokens received by an individual as a payment or reward for forging or staking aretreated as ordinary income on receipt, and the sale of such tokens in the future will also trigger acapital gains tax event. Finland treats mined cryptocurrencies as income from hobby, whereasstaked cryptocurrencies are taxed as capital gains, as the tax authority considers the staked assetas value created on top of the cryptocurrencies already held.New Zealand’s updated guidance on the tax treatment of cryptoassets published in September2020 includes reference to cryptoassets received through mining, staking, airdrops, and forks,with consideration given to the purpose of the activity, including whether it was part of a businessor profit-making scheme. Staking rewards may be taxable upon receipt, and income earned ontheir disposal may also be taxable, depending on the circumstances. Switzerland mentions stakedtokens separately in the federal VAT guidance, which provides general remarks about blockrewards and explains differences between pool mining and pool staking more in detail. Thetaxation is the same, however.IV. Taxation of Tokens Received Through Airdrops or Hard ForksCountries that have provided guidance on the tax treatment of new cryptocurrency tokensreceived from airdrops or hard forks include Australia, Finland, Japan, New Zealand,Singapore, and the UK.Airdropped tokens are treated in Australia the same as staking rewards, as ordinary income fortax purposes. In Singapore, on the contrary, they are not regarded as income of the recipient andtherefore not taxable, as long as the tokens are not received in return for any goods orservices performed.The Law Library of Congress3

Taxation of Cryptocurrency Block Rewards: Comparative SummaryAccording to the official guidance from Finland, cryptoassets created through hard forks are nottaxed at the time of creation but at the time of transfer. Thus, a forked cryptocurrency asset isvalued at zero until it is transferred (sold or exchanged). Japan’s tax authority has explained thatwhen a person acquires a virtual currency from a fork, the person will not be deemed to receivetaxable income at that time. The acquisition price of the new virtual currency is zero yen. Incomewill be generated at the time of selling or using the virtual currency. In Australia, newcryptocurrency received by an investor as a result of a chain split is only taxable on disposal, withthe capital gains tax rules applicable to any resulting gain or loss.The countries in this report that have issued rules or guidance on the tax treatment of mining, oron the tax treatment of staking, airdrops, or hard forks, are shown on the accompanying map.The Law Library of Congress4

Taxation of Cryptocurrency Block Rewards: ArgentinaThe gain obtained from the subsequent sale of the cryptocurrencies obtained through mining willbe considered of Argentine source if the issuer is domiciled, established, or based in the country. 11In order to determine the net profit from mining, the cryptocurrencies obtained as compensationfor services provided to the network will be valued at the market price on the date the transactionentered the network, expressed in national currency. 12 The miner may deduct all the expensesnecessary to obtain, maintain and preserve the taxed profits, such as electricity, amortization ofequipment, and staff salaries. 13If a company owns computer equipment and only rents the mining power to third parties bydepositing the mined cryptocurrencies directly into its clients’ wallet in exchange for a fee, suchfee would be subject to income tax. 14With respect to individuals engaged in cryptocurrency mining with their own computerequipment, software, and other assets who obtain earnings in the form of cryptocurrencies thatare the product of the service provided to the network, if the activity is carried out withinArgentina, such profits will be considered Argentine–source income, 15 and they will be taxed asincome at 35 percent. 1611Id. art. 7.12Ley 11683 de Procedimiento Fiscal, art. 110, BO Jul. 13, 1998, https://perma.cc/QHK5-HAHC.13LIG art. 83.14 Marcos Zocaro, La Minería de Criptomendas y su Tributación en Argentina 5 (Centro de Estudios deAdministración Tributaria, Universidad de Buenos Aires, Sept. 14, 2020), https://perma.cc/KY5X-RSE5.15LIG, arts. 2.2, 5

when they sell the same cryptocurrency into fiat currency later on. Taxation of Cryptocurrency Block Rewards: Comparative Summary . The Law Library of Congress 3 . The income tax treatment of mining is

Cryptocurrency: The Economics of Money and Selected
Apr 09, 2020 · of blockchain technology, cryptocurrency systems protect their public ledgers of accounts against manipulation, so that users can only send cryptocurrency to which they have access, thus allowing users to make val
1m ago
9 Views

Welcome Aboard Rewards & Privileges Dining Entertainment .
to redeem gifts and rewards, including air miles from our partners’ frequent traveler programs. With points adding up faster and no expiry on the points, you can save them up for rewards of your choice in no time. Find out more in our Online Catalogue. Extra Membership Rewards Points Earn extra 10 Membership Rewards* points with every HK 1
7m ago
12 Views

Taxation Law Legal Specialization Application for .
taxation law. My practice has been devoted to issues of taxation law in one or more subspecialties as described in Attachment A-2. Area(s) of subspecialty and nature of work done (e.g., estate planning, property taxation, corporate reorganization, employee benefit plans and other such limited areas): Provide brief description or list
8m ago
17 Views