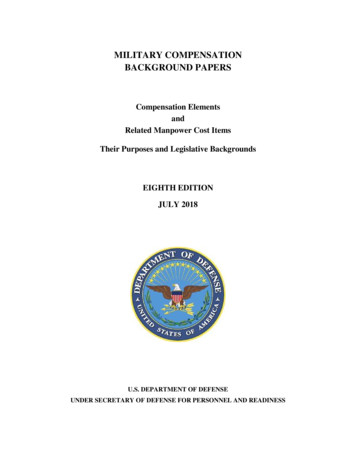 Introduction to the Eighth EditionThe extended nature of the wars in Iraq and Afghanistan have brought significant changes tomilitary operations and desired force structure. Ongoing operations in these theaters have increased thefrequency and duration of deployments of the military, especially in certain high-demand communities.Reserve components are now an operational force and an integral part of the nation’s defense strategy.Their transformation from a strategic to an operational force has significantly reduced the demands andstress on the active components.The requirements of warfare are continuously changing. The massive manpower needs and heavyarmaments of the Cold War era have been replaced by precision weapons, drones, small combat unitsworking with locals, an increased need for security and reaction forces, civil affairs specialists, linguists,and, in general, a more mobile force. Adapting to these changed manpower demands is difficult, andtransitioning to new requirements can be costly.Special and incentive pays are one of the important tools available to military planners to adapt tochanging operational environments and, consequently, play an important role in personnel management.They allow the military to be agile and adaptable by providing incentives to reenlist, retrain, andvolunteer for arduous and dangerous duty. With special and incentive pays, the services can selectivelymanage the force, within limits prescribed by Congress.Included in these special and incentive pays is authorization to provide bonuses for such purposesas enlistment, accession, continuation, and skill conversion. Bonuses are market-driven and respond tochanging conditions of demand and supply. These bonuses have been critical to maintaining reenlistmentrates in the face of increased frequency and length of deployments.The continuing conflict has prompted substantial changes in military compensation. Newlegislation allows the services increased flexibility in the amount of pays and bonuses and the ability toadd new pays within budgetary requirements. New or increased benefits have been provided to militarymembers in the Post 9/11 GI Bill and the Servicemembers’ Civil Relief Act. Military pay has increased,and Congress has continued to pass pay raises, which have increased military pay beyond the 70thpercentile of civilian pay. Congress has also enacted sweeping changes to the military retirement in theBlended Retirement System. This new system will combine the defined benefit of the existing retirementsystem, albeit with a lower multiplier, with government automatic and matching contributions to theThrift Savings Plan. At this time, the Department is in the beginning stages of educating the force tobegin to implement the Blended Retirement System. The legislative changes for these new and existingelements of military compensation are detailed in the ensuing chapters.Alice Buchalter, Bailey Cahall, Malinda Goodrich, Marieke Lewis Brock, Patrick Miller, RamónMiró, Catherine Schwartzstein, and Ahmed Zaied of the Library of Congress prepared this edition of theMilitary Compensation Background Papers. Draft versions of the component chapters were circulated tothe staffs of the Office of the Secretary of Defense and, as appropriate, to the military services for theirreview and comment. Tim Fowlkes, Bill Dougherty, Andrew Corso, CDR Derek Vestal, Tom Liuzzo,LTC Sam Kan, LTC David Dulaney, and Steve Galing of the Directorate of Compensation did the bulk ofthe reviewing, and their contribution to this project is appreciated.Military compensation can be compared to a jigsaw puzzle—there are many pieces, and it is notalways clear how the pieces fit together. The Military Compensation Background Papers provides thebackground that allows the pieces to be assembled into a picture that has some meaning.DON SVENDSENAssistant Director of Compensation— i—

Preface to the Table of ContentsA Note on the Organization of the Third and Subsequent EditionsThe organization of the third and subsequent editions of Military Compensation BackgroundPapers: Compensation Elements and Related Manpower Cost Items—Their Purposes and LegislativeBackgrounds has been changed from that of the first two editions, in that pays that are functionally similaror that have a common legislative heritage are physically grouped together.1 This regrouping has had theincidental effect of emphasizing the common concepts and principles, as articulated in Chapter I of thisedition, which underlie the various compensation elements and manpower cost items that have beengrouped together.In thus regrouping and reorganizing the third and subsequent editions of Military CompensationBackground Papers, the various compensation elements and manpower cost items that make up themilitary compensation system considered as a whole have been subsumed under four major headingsidentified by Chapters II through V, respectively. Thus, Chapter II covers all forms of “pay” for activeand inactive-duty military service; Chapter III covers all forms of post-service compensation, includingseparation payments as well as retired and retainer pay and other benefits; Chapter IV covers benefitssupporting the active- and inactive-duty forces; and Chapter V covers the category of miscellaneouspayments to active- and inactive-duty forces that are, for present purposes, referred to as “manpowerrelated cost items.” Chapter I provides an overview of the military compensation system as a whole,emphasizing the principles and concepts that underlie and inform the system and give it substance andcohesion.Each of the major categories covered by Chapters II through V is in turn broken down into furthergroupings and subgroupings of compensation elements and manpower cost items. For example, ChapterII.B. covers the four elements of military compensation that are subsumed under the heading of “regularmilitary compensation.” These four elements—namely, basic pay, basic allowance for housing, basicallowance for subsistence, and federal income tax advantage—are, in turn, each covered by a separatesubsection. Each of these subsections is designated by a number that reflects its grouping in Chapter II.B.Thus, Chapter II.B.1. is entitled “Basic Pay”; Chapter II.B.2., “Basic Allowance for Housing”; ChapterII.B.3., “Basic Allowance for Subsistence”; and Chapter II.B.4., “Federal Income Tax Advantage.” In asimilar vein, Chapter II.C. covers compensation for non-regular service; Chapter II.D. covers special andincentive pays; and Chapter II.E. covers attraction and retention pays. As was true of Chapter II.B.,Chapters II.C., II.D., and II.E. also are broken down into finer groupings. Chapter II.D.l., for example,covers combat and hazardous duty incentive pays; II.D.2. covers aviation-related pays; II.D.3., submarineand naval pays; and II.D.4., medical hazardous duty pays. Chapter II.D.l. is itself further broken downinto two paragraphs—paragraphs a and b, which cover, respectively, general combat and hazardous dutyincentive pays, on the one hand, and aviation pays, on the other hand. In keeping with the organizationalprinciples previously set out, Chapter II.D.1.a.(1) is titled “Hostile Fire Pay,” Chapter II.D.1.a.(2),“Demolition Duty Pay,” and so forth. This organizational principle is maintained throughout the third andsubsequent editions of Military Compensation Background Papers.In addition to regrouping the various sections,—at least to some extent—the third and subsequenteditions of Military Compensation Background Papers differ in one other respect from prior editions inthat a number of short overview chapters have been added to provide summary information with respectto the different elements of military compensation that have been grouped under a particular heading.1In most cases, the grouping of one element of compensation with another can be easily and persuasively defended.In some cases, however, the grouping of one element with another has been more arbitrary, resulting from a feltneed to impose structure and coherence on a subject that is not always well-structured or coherent. The reader’sindulgence is solicited in those cases where the grouping chosen offends the reader's sensibilities.— iii —

Thus, for instance, an overview chapter (Chapter II.B.) has been added to introduce the various elementsof military compensation grouped under the general heading of “regular military compensation.” In thecase of this particular overview chapter, a short history of the derivation of the concept of “regularmilitary compensation” is set out, together with statistical data covering all of the elements of militarycompensation subsumed under the “regular military compensation” heading. Similar overview chaptersare provided for compensation for non-regular service (Chapter II.C.1.); for the special and incentive paysand the attraction and retention pays (Chapter II.D.); for the so-called “military estate program,”consisting of retired and retainer pays, separation pays, and post-service benefits (Chapter III.A.); forsupporting benefits (Chapter IV.A.); and for manpower-related cost items (Chapter V.A.).Several appendices have been added to the third and subsequent editions of MilitaryCompensation Background Papers to deal with a number of issues that, although not directly concernedwith any one particular element of military compensation, have an impact, in one form or another, onmilitary compensation generally. Thus, an appendix has been added detailing the background of theDepartment of Defense Military Retirement Fund and its relationship to active- and inactive-duty militarycompensation. Similar appendices have been added dealing with the background and impact of theUniformed Services Former Spouses’ Protection Act on military compensation; on the overall structuresof the income-tax systems of the various states and their impacts on military compensation; and so forth.In the sixth edition of Military Compensation Background Papers, the costs of the various typesof military compensation, including pay, benefits, and bonuses, were listed in a separate volume, togetherwith the numbers of armed forces personnel who have received such compensation. However, in seventhedition and this eighth edition, the cost tables have once again been incorporated into the main body ofthe text. They are referenced and inserted at the end of relevant chapters.Resource constraints led to the decision not to update all of the health-care related sections in the8th edition of Military Compensation Background Papers, although, there are some items that deal withhealth issues embedded in other sections were updated. The health-related information in the followingsections has not been updated since the 7th edition: III.D.1. Retired Members Medical Care IV.B.4. Medical Care (Service Members and Dependents) Appendix II Uniformed Services Former Spouses Protection Act Appendix VII Special Pay and Other Benefits for Missing Persons, Prisoners of War (POWs)and Victims of Terrorism Appendix X CHAMPUS and TRICARE— iv —

Branches of Military Power Point - Veterans Affairs
Navy This branch of our nation’s armed services conducts military operations at sea, world-wide. According to the Department of Defense, its focus is “maintaining the freedom of the seas, deterring aggression, and achieving victory at war.” Like the Air Force, the Navy has many aircraft to assist with protecting the seas.File Size: 959KBPage Count: 12Explore furtherUnderstanding the 5 Branches of US Military - US Militaryusmilitary.comBasic Branches of the United States Armylibarts.hamptonu.eduU.S. National Military rmy.milArmy Branches Military Science - SOU Homeinside.sou.eduWhat Are the Branches of the US Military? commended to you b
5d ago
2 Views

Chapter 3 Compensation - Internal Revenue Service
Chapter 3- Compensation Page 3-4 Compensation Section 415 Compensation, Continued Incorporation by Reference When a plan uses a definition of compensation that is intended to satisfy Section 415(c)(3), the definition must clearly state which acceptable definition is being used to avoid ambiguity. For example, a reference to Section
5m ago
12 Views

Military - United States Department of State
military forces do not cooperate with Russian military forces. However, Section 1232 does not purport to limit military-to-military discussions with Russia to de-conflict military operations in Syria to reduce the risk of interference, miscalculation, or unintended escalation
6m ago
53 Views

MILITARY FAMILY LEAVE - DOL
military member, when the need for that counseling arises from the military member’s covered active duty and is provided by someone other than a health care provider. To attend military events and related activities. These could include ofcial military ceremonies, military programs, family support programs, and/or
6m ago
27 Views