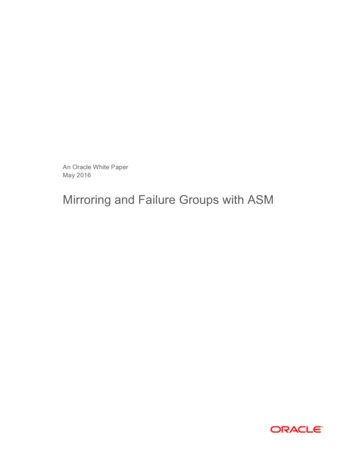 An Oracle White PaperMay 2016Mirroring and Failure Groups with ASM

ASM Mirroring and Failure GroupsWhat is an ASM failure group?ASM mirroring is done at the extent (typically 1MB) level and may be configured for two or three-waymirroring. When ASM allocates an extent for a Normal Redundancy Diskgroup it allocates a primarycopy and a secondary copy. The disk for the secondary copy is chosen to be in a different FailureGroup than the primary copy. Failure Groups are used to place mirror copies of data. Each copy is ona disk in a different Failure Group. Thus the simultaneous failure of all disks in a failure group will notresult in data loss.Three Failure Groups with two way mirroringA Failure Group is a subset of the disks in a Diskgroup, which could fail at the same time because theyshare a common piece of hardware. The failure of that common piece of hardware must be tolerated.Four drives that are in a single removable tray of a large JBOD array should be in the same FailureGroup because the tray could be removed making all four drives fail at the same time. Drives in thesame cabinet could be in multiple Failure Groups if the cabinet has redundant power and cooling sothat it is not necessary to protect against failure of the entire cabinet. ASM mirroring is not intended toprotect against a fire in the computer room that destroys the entire cabinet.Failure Group can fail with no data lossWhat if I never create Failure Groups?Every disk in a Diskgroup belongs to exactly one Failure Group. There are always Failure Groups evenif they are not explicitly created. If the administrator does not specify a Failure Group for a disk, then anew Failure Group is automatically constructed containing just that disk. A Normal RedundancyDiskgroup must be partitioned into at least two Failure Groups. A High Redundancy Diskgroup mustbe partitioned into at least three Failure Groups. However it is much better to have several FailureGroups. A small number of Failure Groups, or Failure Groups of uneven capacity, can lead toallocation problems that prevent full utilization of all available storage.Most systems do not need to explicitly define Failure Groups. The default behavior of putting everydisk in its own Failure Group will work well for most customers. Failure Groups are only needed forlarge complex systems that need to protect against failures other than individual spindle failures.2

ASM Mirroring and Failure GroupsA Normal or High Redundancy Diskgroup is composed of extent sets where all the extents in anextent set contain the same data. For Normal Redundancy there are two extents in an extent set. ForHigh Redundancy there are three extents in an extent set. An extent set contains a primary extent andone or two secondary extent sets. The primary extents for a file are spread evenly across all the disks inthe Diskgroup without considering their Failure groups. Once a primary extent is allocated on a disk asecondary extents is allocated on a disk in another Failure Group. For high redundancy anothersecondary extent is allocated on a disk in yet another Failure Group. Thus every copy of the data is in adifferent Failure Group.When a block is written to a file, the write goes to all the extents in that block's extent set. When ablock is read from a file, the primary extent is read unless it is unavailable. This ensures reads areevenly distributed across all available disks no matter how they are placed into failure groups.How many Failure Groups should I create?Choosing Failure Groups depends on the kinds of failures that need to be tolerated without loss ofdata availability. For small numbers of disks ( 20) it is usually best to use the default Failure Groupcreation that puts every disk in its own Failure Group. This even makes sense for large numbers ofdisks when the main concern is spindle failure. If there is a need to protect against the simultaneousloss of multiple disk drives due to a single component failure, then Failure Group specification can beused. For example, a Diskgroup may be constructed from several small modular disk arrays. If thesystem needs to continue operation when an entire modular array fails, then a Failure Group shouldconsist of all the disks in one module. If one module fails, all the data on that module will be relocatedto other modules to restore redundancy. Disks should be placed in the same Failure Group if theydepend on a common piece of hardware whose failure needs to be tolerated with no loss of availability.Having a small number of large Failure Groups may actually reduce availability in some cases. Forexample, half the disks in a Diskgroup could be on one power supply while the other half are on adifferent power supply. If this is used to divide the Diskgroup into two failure groups then tripping thebreaker on one power supply could drop half the disks in the Diskgroup. Reconstructing the droppeddisks would require copying all the data from the surviving disks after power is restored. This can bedone online but consumes a lot of I/O and leaves the disk group unprotected against a spindle failureduring the copy. However if each disk were its own Failure Group, the Diskgroup would bedismounted when the breaker tripped. Resetting the breaker would allow the Diskgroup to beremounted and no data copying would be needed.Having Failure Groups of different sizes can waste disk space. You may have room to allocate primaryextents, but no space available for secondary extents. For example, suppose there is a Diskgroup withsix disks and three failure groups. If two disks are each their own individual Failure Group and theother four are in one common Failure Group then there will be very unequal allocation. All thesecondary extents from the big Failure Group can only be placed on two of the six disks. The disks inthe individual Failure Groups will fill up with secondary extents and block additional allocation eventhough there is plenty of space left in the large Failure Group. This will also put an uneven write loadon the two disks that are full since they contain more secondary extents that are only accessed forwrites.3

ASM Mirroring and Failure GroupsThe unit of failure is still the individual disk even when there are multiple disks in a Failure Group.Failure of one disk in a Failure Group does not affect the other disks in that Failure Group. Forexample a Failure Group could consist of six disks connected to the same disk controller. If one of thesix disks has a motor failure the other five can continue to operate. The bad disk will be dropped fromthe Diskgroup and the other five will stay in the disk group.Once a disk has been assigned to a Failure Group it cannot be reassigned to another Failure Group. Ifit needs to be in another Failure Group then it can be dropped from the Diskgroup and then addedback. Since the choice of a Failure Group depends on the hardware configuration, a disk would notneed to be reassigned unless it is physically moved.A Failure Group is always a subset of the disks within a single Diskgroup. Thus a Failure Group doesnot include disks from two different Diskgroups. However there could be disks in differentDiskgroups that share the same hardware. It would be reasonable to use the same Failure Group namefor these disks even though they are in different Diskgroups. This would give the impression of beingin the same failure group even though that is not strictly the case.What if I have two simultaneous failures of different Failure Groups?This will usually force a dismount of the disk group. Any attempts to access the files in the Diskgroupwill get I/O errors. If access to the Failure Groups can be restored with no data loss, then theDiskgroup can be mounted again without rebalancing. This happens if there is a failure of a piece ofhardware used by multiple Failure Groups. If two disks in different Failure Groups fail, but not theentire Failure Groups, then there is a reasonable chance that the two disks do not mirror any data, andthe Diskgroup will tolerate the failure.ConclusionASM provides the means to protect the loss of data by mirroring the data across separate FailureGroups inside a Diskgroup. The choice of disks making up the Failure Groups is determined by thecustomer. That choice is determined by what components the customer wants to protect against afailure. In situations where data protection is provided by storage array hardware, then ExternalRedundancy can be use in which case ASM will not mirror data.4

ASM Mirroring and Failure Groups 2 What is an ASM failure group? ASM mirroring is done at the extent (typically 1MB) level and may be configured for two or three-way mirroring. When ASM allocates an extent for a Normal Redundancy Di 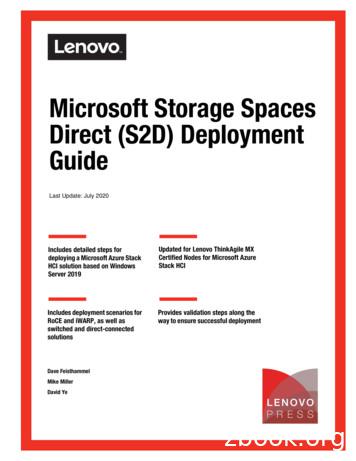 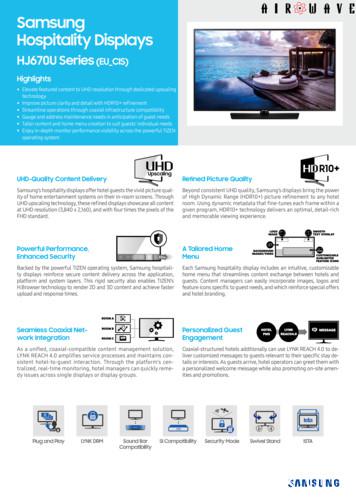 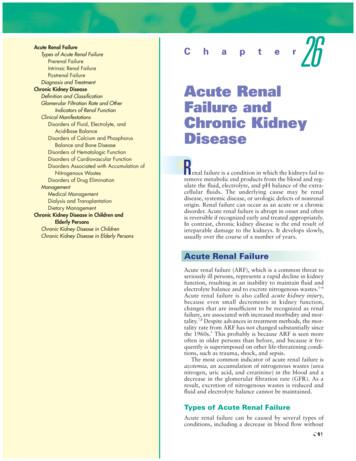 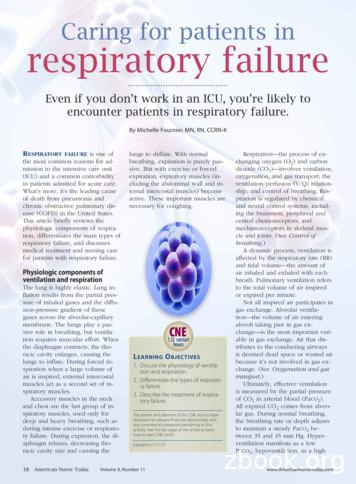 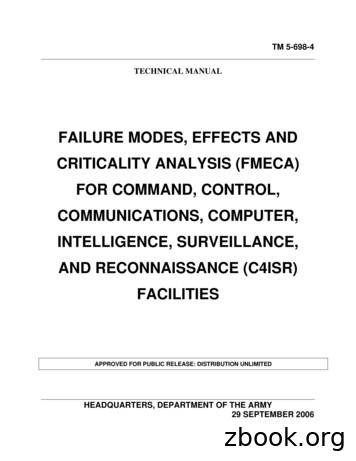 TM 5-698-4 Failure Modes, Effects and Criticality Analysis .
The FMECA is composed of two separate analyses, the Failure Mode and Effects Analysis (FMEA) and the Criticality Analysis (CA). The FMEA analyzes different failure modes and their effects on the system while the CA classifies or prioritizes their level of importance based on failure rate and severity of the effect of failure.
3m ago
9 Views 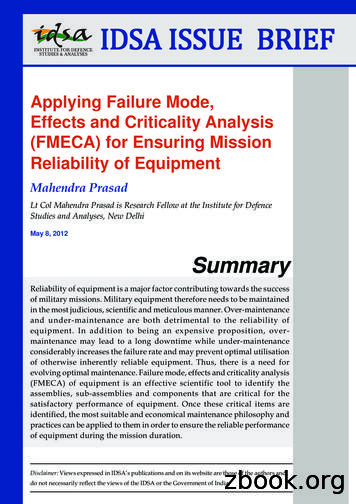 Applying Failure Mode, Effects and Criticality Analysis .
Applying Failure Mode, Effects and Criticality Analysis (FMECA) for Ensuring Mission Reliability of Equipment 6 — Probability level (P i) This is the failure probability of the failure mode and is calculated by taking the ratio of the number of failures attributed to a failure mode to the total number of failures in the system under scrutiny.
3m ago
9 Views 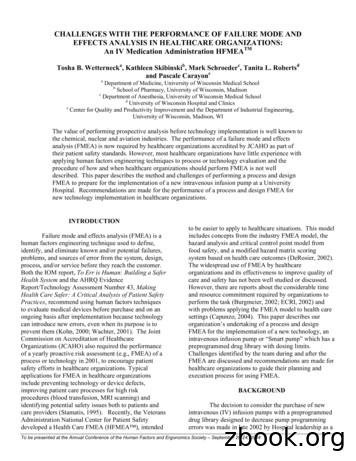 CHALLENGES WITH THE PERFORMANCE OF FAILURE MODE AND .
document. The level of detail in the failure modes and number of failure modes to consider was debated. Team members had concerns with listing failure modes that were not thought to have occurred, and considerable time was spent discussing solutions during the failure mode process, due to the action oriented health care team.
3m ago
11 Views 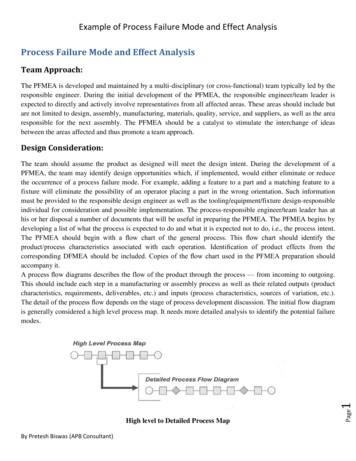 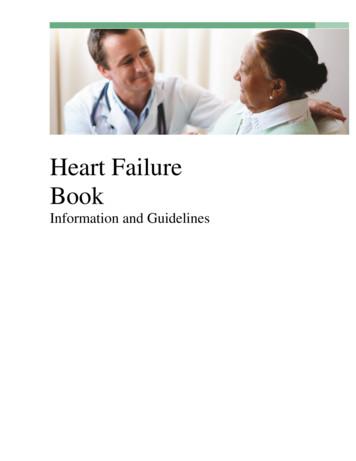 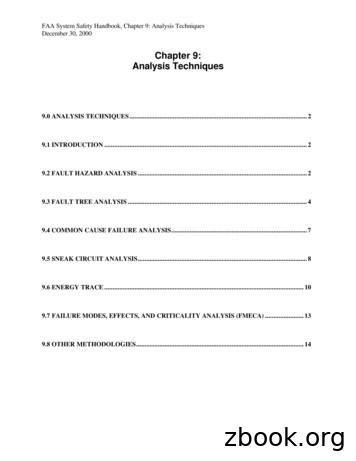 Chapter 9: Analysis Techniques
A single failure rate is often provided to cover all of a component's failure modes rather than separate ones for each. For example, MIL-HBK -217, a common source of failure rates, does not provide a failure rate for capacitor shorts, another for opens, and a third for changes in value. It simply provides a single failure for each operating
3m ago
11 Views 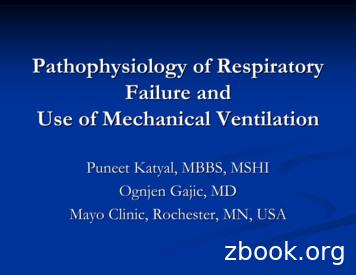 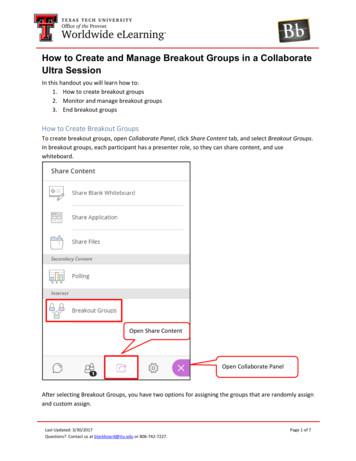