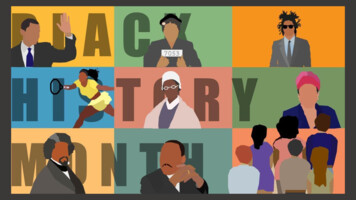 ALVINAILEYBecause he brought dance and thebeauty of black bodies to the fightfor justice.Black History Month

“To be who you are andbecome what you are capableof is the only goal worth living.”- Alvin Ailey

SHIRLEYCHISHOLMBecause she was the first blackwoman to be elected to the UnitedStates Congress in 1968.Black History Month

FREDERICKDOUGLASBecause he escaped slavery to become asocial reformer, abolitionist, statesman andwriter who became one of the most famousintellectuals of his time advising presidentsand lecturing thousands.Black History Month

“It’s not who you are that holdsyou back, it’s who you think youare not.”- Jean-Michell BasquiatArtist

DUKEELLINGTONBecause he was a composer, pianistand a pivotal figure in the history ofjazz.Black History Month

“If you want to fly, you haveto give up everything thatweighs you down.”- Toni Morrison,Author & NobelPrize Winner

JACKIEROBINSONBecause he was the first blackAmerican professional baseballplayer to play for the MLB in themodern era, breaking the colorbarrier.Black History Month

“A life is not important except in the impact ithas on other lives.”-Jackie RobinsonBaseball Player and Activist

JESSEOWENSBecause he set three world recordsand tied another, all in less than anhour, a feat that has never beenrepeated and went on to win 4 goldmedals.Black History Month

“Find the good.It’s all around you.Find it, showcase it andyou’ll start believing init.”- Jesse OwensAthlete

IDA B.WELLSBecause she was a journalist and wasa part of the early Civil RightsMovement.Black History Month

“Don’t sit down and wait forthe opportunities to come.Get up and make them.”- Madam C.J. WalkerEntrepreneur

BLACK HISTORY MONTH - fluxconsole
As we celebrate Black History Month, we recognize New Orleans’ Lower Ninth Ward, where the fight for justice has been long and hard, yet the people understand that theirs is a legacy worth sustaining. We pay respect to the free Black people who created a culturally significant neighborhood more than 160 years ago.
5m ago
4 Views

7 IDEAS FOR TEACHING WOMEN’S HISTORY MONTH
The history and accomplishments of women should be integrated throughout the school year. Although Women’s History Month takes place during the month of March, it is important to keep in mind and acknowledge that, like other groups that comprise U.S. society, the history of wo
2m ago
11 Views
Popular Tags
Recent Views