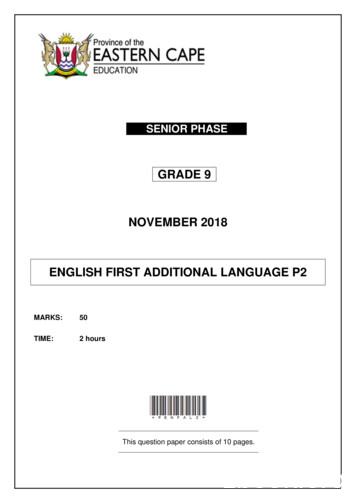 2ENGLISH FIRST ADDITIONAL LANGUAGE P2(EC/NOVEMBER 2018)INSTRUCTIONS AND INFORMATION1.This question paper consists of THREE sections namely:SECTION A: COMPREHENSIONSECTION B: LANGUAGE IN CONTEXTSECTION C: SUMMARY(25)(20)(5)2.1.Answer ALL the questions in ALL the sections.3.Read ALL the questions carefully.4.Start EACH section on a NEW page.5.Leave a line open after each answer.6.Number your answers according to the numbering system used in this questionpaper.7.For multiple-choice questions, write ONLY the letter (A–D) next to the questionnumber.8.Pay special attention to correct language use.9.Write neatly and legibly.Copyright reservedPlease turn over

(EC/NOVEMBER 2018)3ENGLISH FIRST ADDITIONAL LANGUAGE P2SECTION A: COMPREHENSIONQUESTION 1Read the text below and answer the questions that follow.TEXT A2 000 YEARS OF SOCCER1The 21st Soccer World Cup ended on 15 July this year in the Luzhniki Stadium inRussia, nearly eight years after they won the right to host this prestigious event in2010.2The Soccer World Cup was started by FIFA in 1930 when they organised aninternational men’s soccer match which was hosted by Uruguay and had only 13teams participating! The event has taken place every four years since, exceptduring World War II in 1942 and 1946.3More than 2 000 years ago they called the game football in ancient China, notbecause it was played with the feet, but because it was played on foot rather thanon horseback. Greece, Rome and Central America also have an early connectionto the game. The historical development of football can be traced back to at leasthalf a dozen different games; proof that people have been moving a ball aroundfor thousands of years.4The evolution of football into the game we know today, took place in Britain. Avariety of versions of the game played throughout Britain were refined and therules for the game were established in 1863.5At first the ball was an inflated pig bladder wrapped in leather. In ancient China agame called “tsu chu” was played with a ball stuffed with feathers, while playersused leather-covered wine bottles filled with cork shavings in medieval England.6The first rubber soccer ball was made by Charles Goodyear in 1855. Seven yearslater, H.J. Lindon developed the first inflatable rubber bladder which made theball easier to kick and it held its shape better. Synthetic material was introducedin the 1960s. It was then that the black and white ball gained popularity. A Danishsoccer goalkeeper called Eigil Nielsen created the common 32-panel soccerdesign in 1962 and this ball was introduced to the Soccer World Cup in 1970. Itconsists of 20 hexagons and 12 pentagons which fit together like a puzzle tocreate a perfect sphere.7It seems that no World Cup tournament has been without any incident. Two yearsbefore the tournament was due to be held in Chile in 1962, an earthquake with amagnitude of 9.5 on the Richter scale, resulted in officials having to rebuildbecause of the damage done to the infrastructure. When England hosted thetournament in 1966, the trophy was stolen but luckily was found a week later by adog named “Pickles”! South Africa hosted the tournament in 2010 and a recordnumber of yellow cards were issued in the final between The Netherlands andSpain.Copyright reservedPlease turn over

4ENGLISH FIRST ADDITIONAL LANGUAGE P2(EC/NOVEMBER 2018)8Towards the end of June this year, 12 young Thai soccer players and their coachbecame trapped in an underground cave. The attention of the world was fixed onthe rescue attempt. There was much relief when they were all brought to safetyby July 10. As a gesture of goodwill, the FIFA President, Gianni Infantino invitedthe boys to attend the World Cup final but unfortunately, they were not wellenough. However, Manchester United, who most of the boys support, invited theboys to Old Trafford next season.9Soccer certainly has captivated the imagination of the world. Apparently 240million people around the world play soccer regularly. Laduma!!!GLOSSARYRichter Scale – a scale that calculates the size or magnitude of an earthquake from aseismograph.FIFA – Fédération Internationale de Football Association. The English translation is InternationalFederation of Association Football.[Adapted by Examiner]1.11.21.3Refer to paragraph 1 and 2.1.1.1In which country was the 2018 World Cup Soccer Tournament held?(1)1.1.2How many teams took part in the first World Cup Tournament?(1)1.1.3How often does the World Cup Soccer Tournament take place?(1)1.1.4When did the World Cup Soccer Tournament NOT take place?(1)Refer to paragraph 4.1.2.1Find a word in the paragraph which means the same as ‘progress’.(1)1.2.2State whether the following statement is TRUE or FALSE. Give aREASON to support your answer.The British established the rules for soccer.(1)Refer to paragraph 3.1.3.1Why do you think that the leather covered wine bottles were filled withcork and not with sand?Copyright reserved(1)Please turn over

1.45ENGLISH FIRST ADDITIONAL LANGUAGE P2(EC/NOVEMBER 2018)Refer to paragraph 6.Match the words in COLUMN A with their meanings in the context of thepassage in COLUMN B. Write only the question number and the correct letter,for example 1.4.1 A.1.4.1COLUMN AsyntheticACOLUMN Ba flat, five-sided shape1.4.2pentagonBround1.4.3hexagonCa sports contest with five different events1.4.4sphereDartificial; not naturalEa six-sided figure(4 x 1)1.5(4)Refer to paragraph 7.An earthquake ‘resulted in officials having to rebuild.’Explain what they had to rebuild. Give TWO examples.1.6(2)Refer to paragraph 8. Choose the correct answer from those below. Only writethe question number and the letter, for example 1.6.1 D.1.6.1In this paragraph it is stated that 12 THAI soccer players were rescuedfrom a cave. Does the word ‘THAI’ refer to their:ABCD1.6.21.6.3racecolourreligioncountry of birth?What do you think ‘Old Trafford’ is famous for? Use the context to helpyou.(1)Choose suitable words from the list to complete the sentence uedMuch to the (a) of their families, the boys were all (b) and the(c) FIFA President invited them to the World Cup final.(3)Describe how you would feel if you were invited to attend the WorldCup Soccer Final. You must name TWO emotions.(2)Copyright reservedPlease turn over

6ENGLISH FIRST ADDITIONAL LANGUAGE P2(EC/NOVEMBER 2018)QUESTION 2Study the advertisement below and answer the questions that followTEXT B[Image: adeevee.com]*Wording in image: Sport can give new life to children.2.1Describe what is LITERALLY happening in the above picture.(2)2.2Explain what you think the FIGURATIVE meaning of the picture is. Use theSLOGAN in the picture to help you.(3)TOTAL SECTION A:Copyright reserved25Please turn over

(EC/NOVEMBER 2018)9ENGLISH FIRST ADDITIONAL LANGUAGE P2QUESTION 4TEXT DBASIC FOOTBALL RULES“The rules of soccer are very simple, basically it is this: if it moves, kick it. If it doesn’tmove, kick it until it does.” (quote by Phil Woosnan)Football is not quite as simple as that. Here are some of the rules: A football match is played by two teams which consist of 11 players each, one ofwhom is the goalkeeper.A match is played in two 45-minute halves.The aim of the game is to score a goal which is achieved by kicking or headingthe ball into the opposing team’s goal.A referee and two linesmen control the game.[Extract from article on topendsports.com]4.1Fill in the correct PREPOSITIONS.The player ran 4.1.1 the goal and headed the ball 4.1.2. the goal posts.4.2Change the following sentence into the PASSIVE VOICE.A referee and two linesmen control the game.4.3(2)(1)Give the correct form of the word in brackets so that the sentence makes sense.Write out the sentence.Two teams (play; plays) against each other.(1)TOTAL SECTION B:Copyright reservedPlease turn over20

10ENGLISH FIRST ADDITIONAL LANGUAGE P2(EC/NOVEMBER 2018)SECTION C: SUMMARYQUESTION 5Read the passage (TEXT E) below and list SEVEN points on how to be a good teammember.INSTRUCTIONS1.2.3.4.5.6.7.List your SEVEN points in full sentences.Use your OWN words as far as possible.Number your sentences 1–7.Write only ONE point per sentence.Write each sentence on a new line.Your seven-point summary should be no more than 50–60 words in total.Indicate the total number of words you have used in brackets at the end of yoursummary.TEXT EA GOOD TEAM PLAYERWe all need to work together with the members in our team irrespective of the sport weare playing. Selflessness means we should be asking what we can do for our team andnot be focused on our individual goals. Working together will mean more success.Technology is wonderful but in a team sport one needs to learn face-to-facecommunication with one’s team. In this way game plans can be successfullyimplemented.Everyone makes mistakes, but it is how you deal with them that counts. Beaccountable for your actions. If a team is to be successful, then all players should bereliable. That means you should be committed to your team and should attendpractices and matches. If you don’t, then you will be letting the team down.In the same way, it is important to respect one another. You are all trying to achievethe same goal – winning – so respect one another and work together.It is very important to remain positive in all situations even if you are experiencing alosing streak. Keep your spirits up in all situations and encourage one another to doyour best always.Competitiveness has nothing to do with playing games or winning. This has to do withworking hard every day. Push one another at practices so that you improve your skillsand become a better team.Sport is not just about winning, you should also enjoy yourself. Have fun at practicesand keep your passion for the sport going no matter what the final score is.[Adapted from Traits of a good teammate by Jamie MacDonald, www.mahockey.org]TOTAL SECTION C:GRAND TOTAL:Copyright reserved550Please turn over

*Wording in image: Sport can give new life to children. 2.1 Describe what is LITERALLY happening in the above picture. (2) 2.2 Explain what you think the FIGURATIVE meaning of the picture is. Use the S