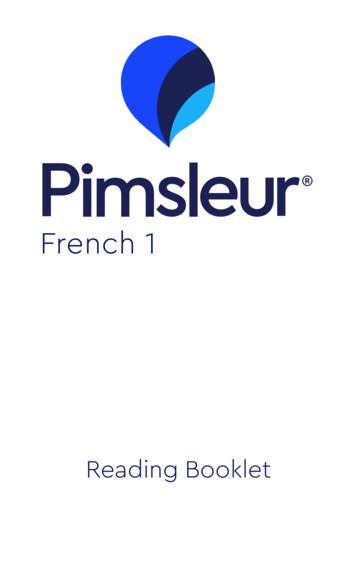 French 1IntroductionWelcome to the Third Edition of Pimsleur’sFrench Level 1.French, the sixth most-spoken language in theworld, is a Romance language, which means itcomes down from the common Latin of the RomanEmpire. Through France’s history of colonization,French has become an official language in 29Francophone countries spanning five continents,and there are numerous French-based creolelanguages, including Haitian Creole.French is a primary or secondary language ofnumerous international organizations includingNATO, the European Union, the United Nations, theWorld Trade Organization, and many more, as wellas having a distinguished history as an internationallanguage of scientific standards and literature.French has a deeply-ingrained relationship toEnglish dating from the Norman Conquest ofEngland, and many English words have a Frenchorigin, including those related to food, such asrestaurant, menu, café, salad, soup, beef, horsd’oeuvres, alcohol, and vinaigrette, as well as wordsconnected to fashion (such as chic, silhouette,petite, faux), travel (depot, en route, souvenir, Bonvoyage) and various aspects of life, such as critique,

French 1entrepreneur, genre, toilet, coup, and cliché.“RSVP” is short for Répondez S’il Vous Plaît, or,“Please respond.”As you will notice, if you have done previouseditions of this course, a few things have changedsince we last updated the course in 2009 to reflectFrance’s adoption of the euro as its currency.Languages are constantly evolving andreflecting changes in their societies. French is noexception. Just as first names like Georges orJacqueline are no longer first picks for Frenchbabies, the French you hear spoken in France todayis not the same French you heard twenty or moreyears ago, and certainly no longer the French youpreviously learned in school, even though thegrammar is still largely the same.For example, French people no longer refer tothe USA as l’Amérique, but instead say les Etats-Unis.Today, it is considered old-fashioned in France to callyoung women mademoiselle.Asking invertedquestions such as Parlez-vous anglais? orVoulez-vous danser? is also a thing of the past.Some outdated words and expressions havebeen dropped (ex. Zut and n’est-ce pas?); many2

French 1current ones have been added (excusez-moi, uneécharpe, un coca) and a few are still mentionedalong with a more modern alternate (comment? isnow less common than pardon? and on va muchmore frequent than nous allons).Also reflected in this new edition is a generaltrend in France toward casual interaction. Althoughspeaking politely and addressing people correctly isalways important, especially for beginning languagelearners, it is also useful to learn to interact morecasually while traveling, working, or vacationing inFrance. With this revised edition, you will be able toask questions both politely (Où est-ce que vousvoulez manger?) and casually (Vous voulez mangeroù?). You will also learn when and where to use thecasual tu (Tu vas bien, Juliette?) versus the formal“vous” (Vous allez bien, madame?) and you willbecome familiar with “on” (On est américains.)which is quickly overtaking “nous” (Nous sommesaméricains.) in everyday conversation.Similarly, the linking of words (liaison), a featureof pronunciation aimed at making French soundmore fluid, is less prevalent in conversation than itonce was. While some liaisons remain standard andmust be used (vous z-êtes, trois z-heures), othersthat were considered optional now tend to be3

FrenchFrench 1 1dropped altogether. For example, where once youmight have heard C’est t-ici (where the “t,” normallysilent in “est” is pronounced as if it were part of theword “ici), you will now more likely hear C’es(t) ici(where the “t” is silent, and there is no linkingbetween the two words). What was pro- nouncedpas z-allé is now pa(s) allé, etc. Again, the coursematerial addresses these changes and has beenrevised to reflect them.You will also notice that some phrases in thecourse are spoken first slowly, then a bit faster. Thisis done to help you clearly distinguish and recognizetheir components before you are asked to practicesaying them at a more natural conversational pace.With this newest edition of French 1, what youare learning is neither stilted “textbook” French, nor“street” French, but rather everyday French asspoken in France. Of course there are regionalaccents, so if you travel outside Paris to the seaside,or the countryside, or to the Alps, you might need toask people to repeat themselves or speak moreslowly. This is a common occurrence in anylanguage, and no one course can cover everypossible regional variation; however, the Frenchtaught in this course will be understood in every partof the country.4

French 1Remember, speaking French clearly and naturallyis not always easy to do at an introductory level, andyou may have to repeat a lesson a few times ifnecessary. The Pimsleur Method has a provensuccess rate and you will find that it is well worth theeffort. We hope you enjoy this latest third edition.ReadingReading is a critical part of learning and understanding a new language, but it may be for differentreasons than you think.If you’re like most people, you learned to speakyour native language well before you learnedto read it: you learned reading later—and it’s adifferent language skill, which uses a different partof your brain.The symbols you see on a page—the alphabet—are a sort of shorthand for the sounds they represent.Inside those sounds is where meaning actually lives.Not only is reading a piece of a language puzzle,learning to read also gives you a chance to learn alanguage from a different direction than how you arelearning to speak in the audio lessons. This “combi5

French 1nation approach” will help you build a solid bridgetoward fluency. You’ll be able to isolate sounds inthe spoken language that you couldn’t quite catchthrough listening alone, and you’ll begin to noticepatterns in words within the language that will helpyou create a web of understanding in your mind. Thisis the natural progression Dr. Pimsleur followed in allof his language courses.By the end of Lesson Two, you’ll have acquiredsome of the sounds of your new language and thereading lessons begin. Our approach is systematic.We’ll walk you through the sounds of the alphabetand you’ll learn how to pronounce letters that looklike English letters, but sound very different fromwhat you are used to, and, in some cases, letterswhich are totally new to you. You’ll also learn theimpact that a symbol, accent, or stress has onpronunciation. You won’t find a list of the words orsentences taught in the audio lessons, but insteadwe’ll take you to the source: sounds of individualletters and letter combinations, and you’ll learn howthese sounds play out in words and sentences. Don’tbe afraid to push yourself with your pronunciationand accent. Be dramatic and have fun! The closeryou can get to the native speaker’s pronunciation,the more authentic your experience will be, and thebetter you’ll remember.6

French 1Eventually, when you’ve mastered the soundsystem, you’ll be able to sound out words on sightand then read for meaning. By the end of the first 30lessons, you will be reading at the same level as youare speaking. You’ll find a Reading Lesson at the endof each of the rest of the audio lessons in this course,starting with Lesson Two.7

French 1Lesson Twenty-Two1.All that he wants is there.2.He didn’t want to believe me.3.I was very disappointed.4.I see the little girl.5.You know her, no?6.I know the whole family.7.Which city do you come from?8.From the city of Lille, with my daughter.9.Whom do you see outside?10.From what I see, all is quiet.11.Are you talking about the city or the girls?12.What’s that story about?13.There is nothing to eat at your place?14.What’s going to become of us, then?15.That’s all I can tell you.16.She is at home.17.And her husband, is he there?18.There is too much work.19.Some fresh milk, with a straw.20.He had spoken to me about it theprevious day.48

French Level 1. French, the sixth most-spoken language in the world, is a Romance language, which means it comes down from the common Latin of the Roman Empire. Through France’s history of colonization, French has become an official langu

FRENCH STARTUPS are reinventing - Capgemini
SPEARHEADS OF FRENCH TECH French Tech was founded to help French startups get into business and it has been successful, having contributed to the emergence of an ecosystem harbouring more than 10,000 startups from across the country. Now, however, we need to take things further. With Horizon French Tech 2022,
11d ago
4 Views

TEACHING SYLLABUS FOR FRENCH (JUNIOR HIGH SCHOOL 1 – 3)
world” that the pupil prepares himself to communicate in the French –speaking world. The syllabus for the three years Junior Secondary School course in French is designed to help pupils to: 1. Acquire the basic skills that will enable them communicate in a French-speaking environment. 2. Prepare themselves for further studies in French. 3.
8m ago
42 Views

Core French Handbook for Parents1 - Sudbury Catholic Schools
French instruction by the end of Grade 8. Students must obtain at least one credit in French at the secondary level. (Source :French As A Second Language Curriculum Grade 1-8, 2013, p.15) What Does Core French Look Like in Sudbury Catholic Schools? Time Allocations and Accumulation for Core F
4m ago
5 Views