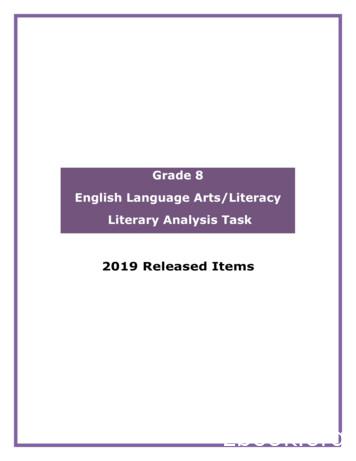 English Language Arts/LiteracyToday you will analyze a passage from The Black Pearl and a poemtitled “The Last Bargain.” As you read these texts, you will gatherinformation and answer questions about the themes of each text soyou can prepare a written response.Read the passage from The Black Pearl, in which pearl dealers visit theSalazar family. Then answer the questions.from The Black Pearlby Scott O’Dell1 They came early in the afternoon, dressed in their best black suits andcarrying a scale and calipers and their money in a crocodile bag. Theexcitement in the town had died after a couple of days, but when word gotaround that the dealers were going to the Salazars to buy the great blackpearl a crowd followed them and stood outside our gate.2 My mother and my two sisters had come back from Loreto, for they too hadheard the news of the pearl, and so the fountain in the patio was turned onand the parlor was fixed up with flowers and all the furniture shone.3 The four men wore serious faces and they put their calipers and scales onthe parlor table and their brown crocodile bag. They sat down and foldedtheir hands and said nothing.4 Then my father said, “The bag is very small, gentlemen. I doubt that it holdsenough money to buy the great Pearl of Heaven.”5 The four dealers did not like this. One of them, named Arturo Martín, wasbig and shaped like a barrel and had small white hands.6 “I have heard that the pearl is the size of a grapefruit,” he said. “In whichcase we have more money than we need. For as you know the large onesare of little value.”7 “They do not live long, these monsters,” said Miguel Palomares, who was asfat as Martín and had a bald head that glistened. “They often die or becomedull before a year passes.”GO ON

English Language Arts/Literacy8 “And so do many of the small ones,” my father said. “Like the pink oneSeñor Palomares sold us last month.”9 Señor Palomares shrugged his shoulders.10 “Before I show the Pearl of Heaven,” my father said, “I will tell you the price.It is twenty thousand pesos, no more and no less.”11 The four men looked at each other and smiled thin smiles, as if to say thatthey had made up their minds already about what they would pay.12 My father went out of the room and came back with the pearl wrapped in apiece of white velvet. He laid it on the table in front of the four dealers.13 “Now, gentlemen.” With a flourish he unwrapped the pearl and stepped backso all of them could see it. “The Pearl of Heaven!”14 The great pearl caught the light, gathered it and softened it into a moon ofdark fire. None of the dealers spoke for a moment or two.15 Then Señor Martín said, “It is as I feared, more like a grapefruit than apearl.”16 “It is a monster all right,” Señor Palomares said. “The kind that often has abrief life and is very hard to sell.”17 One of the dealers who had not spoken cleared his throat and said, “But stillwe will make an offer.”18 The other dealers nodded solemnly.19 “Ten thousand pesos,” said Martín.20 Señor Palomares grasped the pearl in a small, white hand and studied it.21 “I think that I see a flaw,” he said after a long time. “Ten thousand is toomuch.”22 “There is no flaw,” my father said. “And the price, gentlemen, remainstwenty thousand pesos.”GO ON

English Language Arts/Literacy23 The great pearl was passed around to the other dealers and they all turned itin their hands and squinted at it. At last Señor Martín used the calipers andplaced the pearl on the scales. His readings were the same as I had made,almost.24 “Eleven thousand pesos,” he said.25 “Nine thousand more is required,” my father answered. “In your lives youhave never seen a pearl like this one nor will you.”26 “Twelve thousand,” said Señor Palomares.27 After that and for most of an hour the price the dealers offered went up twohundred and fifty pesos at a time until the figure reached the sum of fifteenthousand pesos. And then tempers began to rise and my mother brought ina pitcher of cold juice and a platter of buñuelos. I knew that she wanted totake the dealers’ offer, for I stood where I could see her in the hall makinggestures to my father. She had set her mind on a beautiful red carriage andfour white horses she had seen in Loreto and was fearful of losing her wish ifmy father did not lower the price.28 Señor Martín wiped his mouth and said, “Fifteen thousand pesos is our lastoffer.”29 “Then,” said my father, “I shall take the great pearl to Mexico City and asktwice that amount and sell it without haggling to dealers who know its trueworth.”30 Señor Palomares picked up the pearl and put it down. His small head wassunk deep in the folds of his fat neck. Suddenly his head came forth like thehead of a turtle and he looked at my father who was pacing back and forth.31 “If you remember,” he said, “you made the long journey to the City ofMéxico once before. And what did you find there? You found that the dealersare not so generous with their money as we are here in La Paz. And youcame home after the long journey with your tail between your legs.”32 Señor Palomares got to his feet and the others followed him.GO ON

English Language Arts/Literacy2. Part AFF429341249Which phrase best describes how the author of The Black Pearl develops thetheme that people’s fortunes are beyond their control?A.by hinting that pearl dealers have cheated Señor Salazar in the pastB.by showing that the dealers will offer Señor Salazar less than he wantsfor the pearlC.by showing that Señor Salazar’s family disagrees with him aboutwhether the pearl is valuableD.by hinting that Señor Salazar’s neighbors are only interested in thewealth he could gain from the pearlPart BWhich evidence from the passage supports the answer to Part A?A.“The excitement in the town had died after a couple of days, but whenword got around that the dealers were going to the Salazars to buy thegreat black pearl a crowd followed them and stood outside our gate.”(paragraph 1)B.“The four men looked at each other and smiled thin smiles, as if to saythat they had made up their minds already about what they would pay.”(paragraph 11)C.“At last Señor Martín used the calipers and placed the pearl on thescales. His readings were the same as I had made, almost.”(paragraph 23)D.“‘You found that the dealers are not so generous with their money as weare here in La Paz. And you came home after the long journey with yourtail between your legs.’” (paragraph 31)GO ON

English Language Arts/LiteracyRead the poem “The Last Bargain.” Then answer the questions.The Last Bargainby Rabindranath Tagore“Come and hire me,” I cried, while in the morning I was walking on thestone-paved road.Sword in hand, the King came in his chariot.He held my hand and said, “I will hire you with my power.”But his power counted for nought, and he went away in his chariot.5 In the heat of the midday the houses stood with shut doors.I wandered along the crooked lane.An old man came out with his bag of gold.He pondered and said, “I will hire you with my money.”He weighed his coins one by one, but I turned away.10 It was evening. The garden hedge was all aflower.The fair maid came out and said, “I will hire you with a smile.”Her smile paled and melted into tears, and she went back alone into thedark.The sun glistened on the sand, and the sea waves broke waywardly.A child sat playing with shells.15 He raised his head and seemed to know me, and said, “I hire you withnothing.”From thenceforward that bargain struck in child’s play made me a free man.“The Last Bargain” by Rabindranath Tagore—Public DomainGO ON

English Language Arts/Literacy3. Part AFF429342501What does the word hire mean as it is used in the last stanza of “The LastBargain”?A.to make an insincere offer that will soon be forgottenB.to form an agreement that is based on an exchange of goodsC.to form a relationship that is based on a feeling of understandingD.to make a quick promise that will be ignored when interest is gonePart BWhich evidence from the poem best supports the answer to Part A?A.“. . . glistened on the sand . . .” (line 13)B.“. . . playing with shells.” (line 14)C.“. . . raised his head . . .” (line 15)D.“. . . seemed to know me . . .” (line 15)GO ON

English Language Arts/Literacy4. Part AFF429343697What does line 9 of “The Last Bargain” reveal about the speaker?A.The speaker is insulted by the offer.B.The speaker is not able to express his wishes.C.The speaker is not interested in gaining wealth.D.The speaker is becoming frustrated with others.Part BWhich evidence from the poem supports the answer to Part A?A.“. . . houses stood with shut doors.” (line 5)B.“‘I will hire you with my money.’” (line 8)C.“. . . she went back alone into the dark.” (line 12)D.“‘I hire you with nothing.’” (line 15)GO ON

English Language Arts/LiteracyFF4293547867. You have read a passage from The Black Pearl and the poem “The LastBargain.”Write an essay analyzing how the events in each text contribute to thedevelopment of each text’s theme. Be sure to use evidence from both textsin your essay.GO ON

English Language Arts/LiteracyFF4293541289. You have read a passage from The Black Pearl and the poem “The LastBargain.”Write an essay in which you analyze how the characters develop the themein each text. Be sure to use evidence from both texts in your essay.GO ON

English Language Arts/Literacy10. Part AFF429340074What is the meaning of haggling as it is used in paragraph 29 of thepassage from The Black Pearl?A.losing an opportunityB.burdening the familyC.concealing the truthD.debating a pricePart BWhich evidence from the passage best supports the answer to Part A?A.“She had set her mind on a beautiful red carriage and four white horses. . .” (paragraph 27)B.“Señor Martín wiped his mouth and said, ‘Fifteen thousand pesos is ourlast offer.’” (paragraph 28)C.“‘If you remember,’ he said, ‘you made the long journey to the City ofMéxico once before.’” (paragraph 31)D.“Señor Palomares got to his feet and the others followed. . . .”(paragraph 32)STOP

Grade 10 English Language Arts (20F)
Welcome to Grade 10 English Language Arts (20F). You are beginning this course with language arts skills, knowledge, and insights. This course is designed to help you gain further insights into yourself and others, and to expand your skills and knowledge in English language arts.
4m ago
60 Views