You Play Too Much Final Fantasy – Tribute To The Glory . 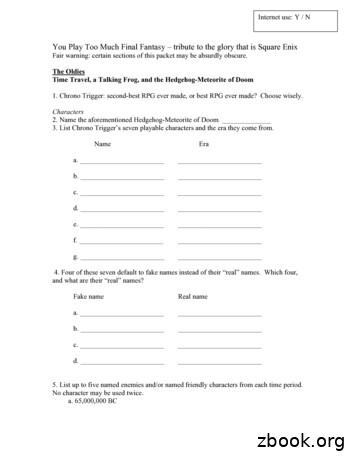 Internet use: Y / NYou Play Too Much Final Fantasy – tribute to the glory that is Square EnixFair warning: certain sections of this packet may be absurdly obscure.The OldiesTime Travel, a Talking Frog, and the Hedgehog-Meteorite of Doom1. Chrono Trigger: second-best RPG ever made, or best RPG ever made? Choose wisely.Characters2. Name the aforementioned Hedgehog-Meteorite of Doom3. List Chrono Trigger’s seven playable characters and the era they come from.NameEraa.b.c.d.e.f.g.4. Four of these seven default to fake names instead of their “real” names. Which four,and what are their “real” names?Fake nameReal namea.b.c.d.5. List up to five named enemies and/or named friendly characters from each time period.No character may be used twice.a. 65,000,000 BC

b. The Dark Ages / Kingdom of Zealc. The Middle Agesd. The Presente. 2300 A.D.6. The Three Gurus.a. What are they the Gurus of?i.Gaspar, the Guru ofii.Belthasar, the Guru ofiii.Melchior, the Guru ofb. Their names are not original. Where might the game’s creators/translators havetaken the names from?7. One of Goldston’s favorite characters is Spekkio, Master of War.a. When you first meet Spekkio, what does he look like?b. When Spekkio grants you magical power, what magic words does he use?Endings8. One of the unique features of this game is its extremely large number of possibleendings.a. How many official endings are there?b. For extra points, briefly describe as many endings as you can remember (it can beas few as two or three well-chosen words).c. In the game’s “normal” ending, Crono and Marle’s relationship seems secure, thefuture has been saved, and Magus is still mostly silent and moody. The only surprise isthat Crono’s mom ran into a time portal and is now lost in time. Looks like you aren’tdismantling your time machine after all. If Crono was a good son, the kind who’s aroundthe house and taking care of chores instead of saving the world how might you haveprevented this?

Final Fantasy III1. Best RPG ever made or second best RPG ever made? (Note: answer should differfrom Chrono Trigger #1)2. Acquirable party characters – List their names and unique abilities.3. Moogles too cool to watch over your furniture.a. Mog, the cute-ass, smooth-talking little moogle is needed in order to getUmaro. What is the real effect of the item Umaro uses on himself when youfight him?b. Prior to recruiting sasquatches and being hostage to the Lone Wolf (i.e. in thecommercials for FFIII) what was Mog's Job?c. Though Mog is the only moogle in FFIII that can talk, there are some otherswith names. List as many as you can.4. In what bizzare place is Gogo's hideout located?5. Two unique and powerful casting items can be mutually interchanged at theColosseum. What are they and what do they do?6. In an unfortunate bug/exploit on the part of Square, what is the fastest way todefeat Atma Weapon on the Floating Continent?

What's an RPG without some tactics? Final Fantasy Tactics1) Job system - Like the gold chocobo, the Mime class had a complex set ofrequirements to unlock it. If a character has Mime, what job levels must he alsohave?2) If you took Edward from FFIV, made him a woman, and shoved him into FFT,what job would she be?One of the hidden characters of FFT is summoned from another dimension. Who doesthis person save from a loan shark? Extra Credit – what city does this happen in?Minigames and RPG athletics (who says nerds don’t play sports?)ChronoTrigger1. Why do you need to chug hot Jurassic pork soup competitively (read: press the Abutton faster than should be humanly possible)?2. At the Millennial Fair, you can practice your combat skills against a singing robot.What’s his name, and can you remember any of his song?3. In Norstein Bekkler’s tent at the Millennial Fair, there are three mini games. Oneinvolves throwing rocks at monsters and hitting a blue switch to save a damsel in distress.Another is essentially three-card monty, with identical NPCs instead of cards. What’s thethird? (Hint: this game can be described using only two words.)Final Fantasy VII4. The name of mini-game central:5. In addition to the Wonder Square, there are several other squares or areas in mini-gamecentral. List as many of the other sections of ‘mini-game central’ as you can:a.b.c.d.

e.f.6. The wonders of Wonder Square:a. What do you feed a Mog to help it fly?b. Two mini-games are based on actual events within the larger FFVII plot.Which are they? What are the game goals? To what actual game events do theyrefer?Game1.GoalEvent2.7. A convenient tool: RPGs teach environmentalism?a. You must protect what endangered bird by halting the Shinra attacks on thisfort in this (sorry and sole) example of a strategy-based mini-game?b. You get a nice materia for your efforts. What is it called and what is itsexcellent extra property (particularly when attached to Final Attack materia)?Final Fantasy X: Blitzball (of course)8. Many real-life sports are played on flat, rectangular, turf fields. What is the blitzball‘playing field’ like?9. List the six official blitzball teams:a.b.c.d.e.f.10. Tidus is performing what blitzball move when he first sees Sin’s attack on Zanarkand(in, may I add, arguably the best cut-scene sequence in all of the very visually impressiveFFX)?

Chocobos1. Chocobos have appread in all numbered FF installments with only one exception.Which installment does not feature any chocobos?2. The name ‘chocobo’ was inspired by what confectionary treat?3. Complete the following breeding diagram for the ultimate FF7 chocobo:Great OR goodchocoboCarob nutGreat chocoboGold chocobo4. You can get this gem of a steed in FF7 only one other way, a way that does not involveany visits to that scamming forgetful Chocobo Sage and is not the alternate, more laborintensive, breeding strategy than the one outlined above. What is it?

5. What highly desirable item is only accessible via gold chocobo? (note: without thisitem, it is practically impossible to complete the requirements for the answer to theprevious question)6. Carob nuts can be stolen from what beastie?7. The best greens, those that increase a Chocobo’s speed, intellect and stamina, costmore gil a pop than many of the early weapons or accessories in the game. What kind ofgreens are these, and how much does a single unit cost?8. Doggies go ‘woof woof’ in English and ‘wan wan’ in Japanese.Kitties go ‘meow’ in English and ‘nyan nyan’ in Japanese.Chocobos go in English and in Japanese.

The logosMatch the following square enix game logos with their respective titles:A.B.C.D.E.F.

FFXDrakengaardFFVIIIFFVIIChrono TriggerFFIIIFFXIFFIXFFVIFFIVKingdom heartsCross Series mentions1. El Cid – Cid is notorious for showing up in Final Fantasy games. Where do youfind him in each of these American releases?1. FFII –2. FFIII –3. FFVII –4. FFVIII –5. FFIX –6. FFX –7. FFXI –8. FF Tactics –9. Kingdom Hearts 2. List other names that are used cross-series for different characters.

Too and Enough . Complete with too or enough.
Oh! It’s too heavy to lift! I’m not strong enough to lift weights. I’m too short to play basketball. Yes, you’re not tall enough to play basketball. Too and Enough . Too and enough are used with adjectives, adverbs and nouns. - Too means more than what is necessary. - Enough means as much as necessary. Examples: 1. Too adjective:
2m ago
7 Views

Our Men Do Not Belong to Us
And go beyond. from “I Heard a Bird Cry,” by Koﬁ Awoonor. This is the abridged, electronic version of Our Men Do Not . Then the men we try to love say we carry too much loss, wear too much black, are too heavy to be around, much too sad to love. . daring her to look at me and give me what I
4m ago
7 Views

Too Enough
Too – Enough Too goes before adjectives and adverbs. It has a negative meaning and shows that something is more than enough, more than necessary or more than wanted. too adjective/adverb to –infinitive. *Helen is too rude to become a doctor. *He explains me too clearly for me to understand him.
2m ago
12 Views

Be Cool, Follow the Rules - UNC Campus Recreation
Make sure you always have enough energy to swim back to shore. Leader’s Note: Have students complete Activity Sheet 2-5: Dangerous Beach. zz Watch out for the “dangerous too’s” cc Too tired cc Too cold cc Too far from safety cc Too much sun Leader’s Note: See Fact Sheet 3, Longfellow’s Rules for Safe Swimming, which provides .
2m ago
5 Views

Learning through play - UNICEF
promote play, exploration and hands-on learning are at the core of effective pre-primary programmes. The next section of this brief explains what is meant by play and play-based learning and gives examples of the many ways in which children learn through play. Play takes many forms Everyone knows ‘play’ when they see it – on
6m ago
35 Views