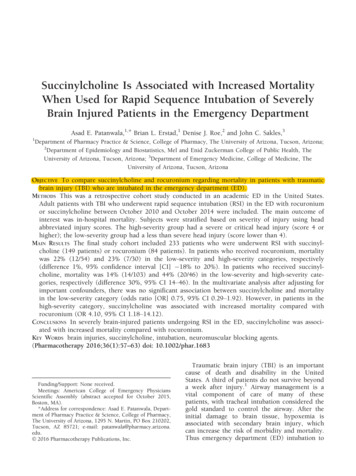 Succinylcholine Is Associated with Increased MortalityWhen Used for Rapid Sequence Intubation of SeverelyBrain Injured Patients in the Emergency DepartmentAsad E. Patanwala,1,* Brian L. Erstad,1 Denise J. Roe,2 and John C. Sakles,31Department of Pharmacy Practice & Science, College of Pharmacy, The University of Arizona, Tucson, Arizona;2Department of Epidemiology and Biostatistics, Mel and Enid Zuckerman College of Public Health, TheUniversity of Arizona, Tucson, Arizona; 3Department of Emergency Medicine, College of Medicine, TheUniversity of Arizona, Tucson, ArizonaOBJECTIVE To compare succinylcholine and rocuronium regarding mortality in patients with traumaticbrain injury (TBI) who are intubated in the emergency department (ED).METHODS This was a retrospective cohort study conducted in an academic ED in the United States.Adult patients with TBI who underwent rapid sequence intubation (RSI) in the ED with rocuroniumor succinylcholine between October 2010 and October 2014 were included. The main outcome ofinterest was in-hospital mortality. Subjects were stratified based on severity of injury using headabbreviated injury scores. The high-severity group had a severe or critical head injury (score 4 orhigher); the low-severity group had a less than severe head injury (score lower than 4).MAIN RESULTS The final study cohort included 233 patients who were underwent RSI with succinylcholine (149 patients) or rocuronium (84 patients). In patients who received rocuronium, mortalitywas 22% (12/54) and 23% (7/30) in the low-severity and high-severity categories, respectively(difference 1%, 95% confidence interval [CI] 18% to 20%). In patients who received succinylcholine, mortality was 14% (14/103) and 44% (20/46) in the low-severity and high-severity categories, respectively (difference 30%, 95% CI 14–46). In the multivariate analysis after adjusting forimportant confounders, there was no significant association between succinylcholine and mortalityin the low-severity category (odds ratio [OR] 0.75, 95% CI 0.29–1.92). However, in patients in thehigh-severity category, succinylcholine was associated with increased mortality compared withrocuronium (OR 4.10, 95% CI 1.18–14.12).CONCLUSIONS In severely brain-injured patients undergoing RSI in the ED, succinylcholine was associated with increased mortality compared with rocuronium.KEY WORDS brain injuries, succinylcholine, intubation, neuromuscular blocking agents.(Pharmacotherapy 2016;36(1):57–63) doi: 10.1002/phar.1683Funding/Support: None received.Meetings: American College of Emergency PhysiciansScientific Assembly (abstract accepted for October 2015,Boston, MA).*Address for correspondence: Asad E. Patanwala, Department of Pharmacy Practice & Science, College of Pharmacy,The University of Arizona, 1295 N. Martin, PO Box 210202,Tucson, AZ 85721; e-mail: [email protected]Ó 2016 Pharmacotherapy Publications, Inc.Traumatic brain injury (TBI) is an importantcause of death and disability in the UnitedStates. A third of patients do not survive beyonda week after injury.1 Airway management is avital component of care of many of thesepatients, with tracheal intubation considered thegold standard to control the airway. After theinitial damage to brain tissue, hypoxemia isassociated with secondary brain injury, whichcan increase the risk of morbidity and mortality.Thus emergency department (ED) intubation to

58PHARMACOTHERAPY Volume 36, Number 1, 2016secure a definitive airway is standard practicefor patients with TBI who require airway protection. Airway protection is typically required inpatients with altered mental status, depressedlevel of consciousness, or respiratory compromise. Rapid sequence intubation (RSI) is thepreferred method to achieve tracheal intubation.This technique utilizes a neuromuscular blocking agent (NMBA) to achieve complete motorparalysis, thereby making the procedure saferand easier to accomplish.The most common NMBAs used are succinylcholine and rocuronium.2 Succinylcholine usemay be associated with a transient increase inintracranial pressure (ICP) according to officiallabeling by the Food and Drug Administration.3An increase in ICP may worsen cerebral hypoxemia by decreasing cerebral perfusion pressure,and critical increases in ICP may also lead tobrain herniation, coma, and death. The mechanism for this increase in ICP is incompletelyunderstood but may be mediated via an increasein afferent spinal neural traffic originating frommuscle spindle fibers, followed by an increase incerebral blood flow. Thus rocuronium is sometimes used as an alternative in patients with TBI.However, rocuronium has a long duration ofeffect that leads to sustained paralysis for morethan an hour postintubation, preventing the possibility of repeat neurologic assessments duringthis time period.4 Patients receiving rocuroniumhave also been shown to receive less sedationand analgesia in the immediate postintubationphase because their pharmacologically inducedparalysis may make it appear as if they are calmand sedated.4, 5 This has implications for patientcomfort but may be ameliorated by the presenceof pharmacists during resuscitation.6 Hencethere is ongoing variation in practice and debateregarding the optimal NMBA to use for RSI inpatients with TBI.Previous reports evaluating the effect of succinylcholine on intracranial pressure have showninconsistent results.7–9 These were generallysmall studies and typically included fewer than20 neurosurgical patients. It is unclear if the risein ICP associated with succinylcholine results inany long-term adverse effects. More specifically,no comparative studies between succinylcholineand rocuronium have been conducted to evaluate their effects on important outcomes such asmortality. Thus there is an important gap in theliterature that requires investigation to guideclinicians on the preferred NMBA for RSI inpatients with TBI.The primary objective of this study was tocompare succinylcholine and rocuronium withregard to in-hospital mortality in patients withTBI who underwent RSI in the ED. We hypothesized that there would be no difference in ne compared with rocuronium.MethodsStudy Design and SettingThis retrospective cohort study was conductedin an urban academic ED in the United States.The ED has a seven-bed trauma resuscitationunit. The institution is designated as a level 1trauma center by the American College of Surgeons. Emergency physicians have access to anRSI kit containing succinylcholine and rocuronium. Selection of either agent is based on provider preference; no institutional protocol is inplace. The institutional review board that maintains oversight of the hospital approved thestudy prior to data acquisition.Patient SelectionA combination of hospital databases and electronic medical records were used for data acquisition of patients admitted with TBI during a 4year period between October 2010 and October2014. All adult patients (18 years and older)with TBI who were intubated with succinylcholine or rocuronium in the ED were included.Patients were identified based on InternationalClassification of Diseases, 9th Revision, ClinicalModification (ICD-9-CM) diagnoses codes. Anautomated and validated process was used forselection of patients with TBI, as previouslydescribed in the literature.10, 11Study Variables and MeasurementsThe following variables were considered relevant to the study: age, sex, race, ethnicity, inhospital mortality, intensive care unit (ICU)length of stay, NMBA used, induction agent used,intubation attempts, ICD-9-CM diagnosis codes,Charlson Comorbidity Index (index of comorbidconditions calculated as a sum of prespecifiedconditions),12 Injury Severity Score (range from0–75; higher value indicating greater overallseverity of injury), and Abbreviated Injury Severity for the head region (head AIS) (range from0–6; higher value indicating greater injury).13

SUCCINYLCHOLINE IN TRAUMATIC BRAIN INJURY Patanwala et alHead AIS was dichotomized as either high severity (severe or critical head AIS [score 4 orhigher]) or low severity (less-than-severe headAIS [score lower than 4]). All patients had ahead AIS score of at least 1 (minor severity);none had a score of 6 (unsurvivable injury).Head AIS of 4 or higher is associated with muchhigher mortality compared with head AIS lowerthan 4; thus this point was chosen fordichotomization of this variable.14 Injury severityscores were derived from ICD-9-CM codes; theseare the basis for the Healthcare Cost and Utilization Project databases created by the Agency forHealthcare Research and Quality, which havebeen validated as an accurate predictor of survival.11, 15 Most variables in this study, includingour primary outcome of in-hospital mortality,were electronically retrieved from electronicmedical records and financial data. Thus measurement bias due to manual data extraction wasreduced. Only three variables were obtainedmanually from medical records because theywere not retrievable electronically. Theseincluded Glasgow Coma Scale (GCS) (lowestscore prior to intubation in the ED), occurrenceof hypotension (systolic blood pressure lowerthan 90 mm Hg), and occurrence of hypoxemia(oxygen saturation less than 90%). For the lattertwo measurements, all recordings in the prehospital setting and ED were evaluated.Outcomes and Data AnalysisThe primary outcome of interest was in-hospital mortality. This study was powered for a 20%(30% vs 50%) absolute difference in mortality,which is considered a large effect size. Using ana of 0.05 and power of 80%, we estimated that93 subjects would be needed in each group. TheFisher exact test was used to compare mortalityand other categorical variables between patientswho received succinylcholine and rocuronium.Normally distributed continuous variables werecompared between the two groups using anunpaired Student t test. Nonnormally distributedcontinuous variables were compared using theWilcoxon rank sum test. There were no missingvalues in the data set; thus imputation was notrequired. A secondary outcome of interest wasICU length of stay. However, this variable isinherently biased by in-hospital mortality. ThusICU length of stay is reported for both survivorsand nonsurvivors.A logistic regression analysis was conducted forthe primary outcome variable of in-hospital mor-59tality. The primary predictor of interest was theNMBA used (succinylcholine or rocuronium).Based on our sample size and patients’ probabilityof death, we anticipated the need to limit thenumber of potential confounders added to thismodel. Although several variables can predictmortality, few influence paralytic selection tomeet the definition of confounding based on causal pathways. Age, GCS score, and head AIS wereconsidered to be potential confounders. Forinstance, succinylcholine is considered the standard for most intubations, but providers mayavoid use in the elderly due to the possibility forprecautions (e.g., renal insufficiency, electrolyteabnormalities, or neuromuscular disease). Also,clinicians may avoid use of succinylcholine whenincreased ICP is a concern, which is more likelyto occur with greater head injury severity (lowGCS and high head AIS).The intent was not to develop a parsimoniousor a predictive model, but rather to adjust forpotential confounding. The model was checkedfor interactions. A significant interaction wasidentified between the NMBA and head AIS.Thus the model was stratified by high-severityhead AIS and low-severity head AIS. Continuousvariables in the final models were checked forthe assumption of linearity in the log odds.Based on this assessment, GCS was divided intofour ordinal categories as scores 3–5, 6–8, 9–11,and 12–15. The goodness of fit of the finalmodels were checked with the Hosmer-Lemeshow goodness-of-fit test. The area under thereceiver operating characteristic curves was evaluated for discriminatory ability of the final models. The occurrence of hypotension wassignificantly different between groups; thus wedecided to add this variable to the final modelto see if it changed the results as part of a sensitivity analysis. Another sensitivity analysis wasconducted with all potentially pertinent clinicalcovariates (age, GCS, hypotension, hypoxia, andtotal injury severity score, and Charlson Comorbidity Index) to determine if it changed theresults. Given the potential for overfitting themodel, this latter model was only included aspart of a sensitivity analysis. All analyses wereconducted using Stata v.13 (College Station,TX), and a two-tailed a of 0.05 was consideredstatistically significant.ResultsThere were 3258 patients with TBI during thestudy time period, of which 260 were identified

60PHARMACOTHERAPY Volume 36, Number 1, 2016as adults who were intubated in the ED. Ofthese, 25 did not receive an NMBA, and 2received vecuronium for intubation. Thus thefinal study cohort included 233 adult TBIpatients who underwent RSI using succinylcholine or rocuronium. Of these, 149 receivedsuccinylcholine and 84 received rocuronium.The median age was 42 years (interquartilerange [IQR] 29–56); most patients were male(188 [81%]) and white (40 [60%]). Overall,33% of patients (76) had a high-severity headinjury. Table 1 reports the baseline comparisonsin each group. The groups were similar, withthe exception of age and occurrence of hypotension. The succinylcholine group was youngerand more likely to be hypotensive.Death occurred in 23% of patients in eachgroup. In patients who received rocuronium,mortality was 22% and 23% in the low-severityhead injury and high-severity head injurygroups, respectively (difference 1%, 95% confidence interval [CI] 18 to 20). In patients whoreceived succinylcholine, mortality was 14% and44% in the low-severity and high-severity headinjury groups, respectively (difference 30%, 95%CI 14–46). In patients with less-than-severe headAIS, there was no significant association

Head AIS was dichotomized as either high sever-ity (severe or critical head AIS [score 4 or higher]) or low severity (less-than-severe head AIS [score lower than 4]). All patients had a head AIS score of at least 1 (minor severity); none had a score of 6 (unsurvivable injury). Head AIS of 4 or higher is associated with much 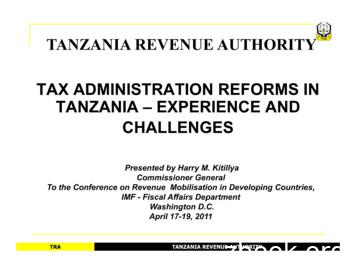 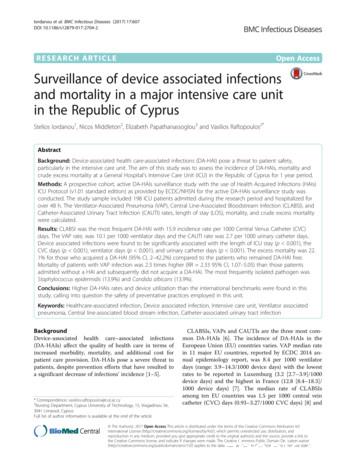 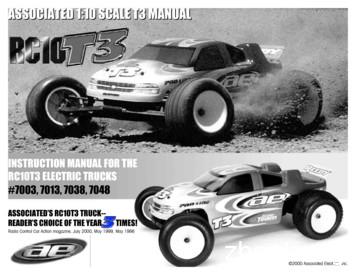 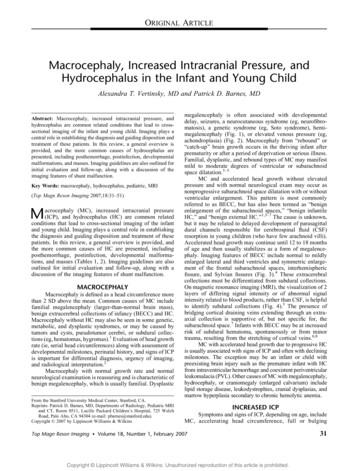 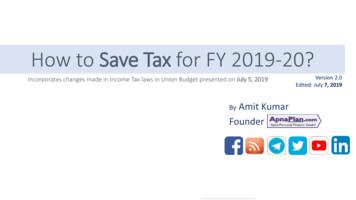 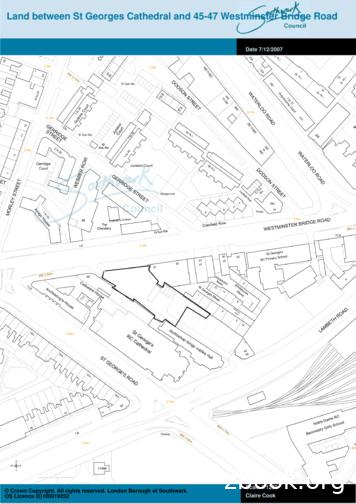 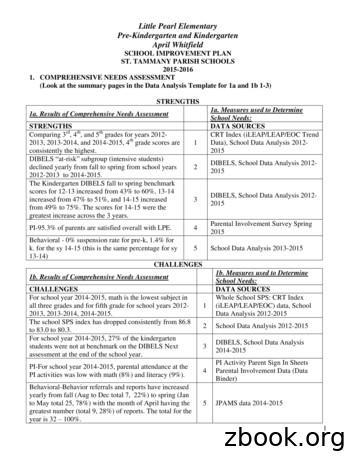 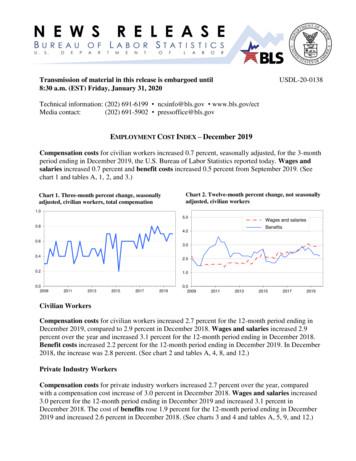 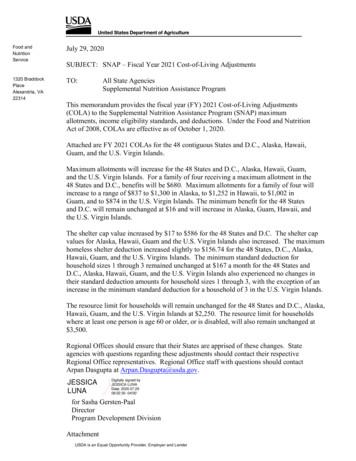 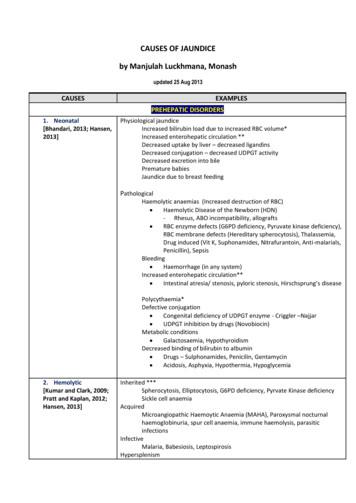 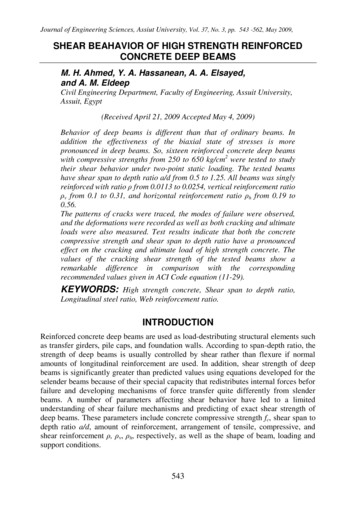 SHEAR BEAHAVIOR OF HIGH STRENGTH REINFORCED CONCRETE DEEP .
by the a/d, but that of deep beams was slightly affected by the le/d. ultimate shear strength of tested beams was increased slightly due to web reinforcement. In deep beams with high strength concrete, ultimate shear strength was increased slightly with addition of vertical shear reinforcement as a/d increased. Kong [5], conducted an
1m ago
10 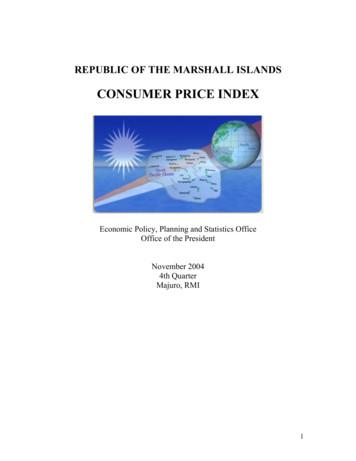 CONSUMER PRICE INDEX
r cent a ge s Series1 CPI 4th Quarter 2004 During the 4th quarter of 2004 reporting period the Majuro CPI increased by 0.77% over the last quarter. Over the last 4 quarters (February 2004) the Majuro CPI has increased by a total of 2.01%. The largest increase in the CPI was in the Alcohol Beverage Group, which increased by 17.59%.
1m ago
2
Popular Tags
Recent Views