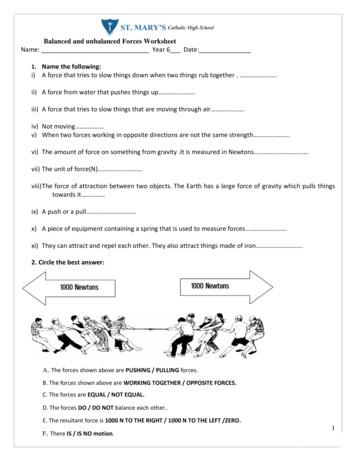 Balanced and unbalanced Forces WorksheetName: Year 6 Date:1. Name the following:i) A force that tries to slow things down when two things rub together . .ii) A force from water that pushes things up .iii) A force that tries to slow things that are moving through air iv) Not moving v) When two forces working in opposite directions are not the same strength .vi) The amount of force on something from gravity .It is measured in Newtons .vii) The unit of force(N) .viii) The force of attraction between two objects. The Earth has a large force of gravity which pulls thingstowards it ix) A push or a pull .x) A piece of equipment containing a spring that is used to measure forces .xi) They can attract and repel each other. They also attract things made of iron .2. Circle the best answer:A. The forces shown above are PUSHING / PULLING forces.B. The forces shown above are WORKING TOGETHER / OPPOSITE FORCES.C. The forces are EQUAL / NOT EQUAL.D. The forces DO / DO NOT balance each other.E. The resultant force is 1000 N TO THE RIGHT / 1000 N TO THE LEFT /ZERO.F. There IS / IS NO motion.1

A. The forces shown above are PUSHING / PULLING forces.B. The forces shown above are WORKING TOGETHER / OPPOSITE FORCES.C. The forces are EQUAL / NOT EQUAL.D. The forces DO / DO NOT balance each other.E. The stronger force is pulling to the RIGHT / LEFT.F. The weaker force is pulling to the RIGHT / LEFT.G. Motion is to the RIGHT / LEFT.Circle the best answer on the line provided.i. If an object starts to accelerate, .a. a balanced force is acting on itc. velocity is acting on itb. gravity is acting on itd. an unbalanced force is acting on itii. When forces are balanced, the total force .a. is greater than the sum of the forcesb. is zeroiii. A force is which one of these?a. a pushb. a push or pullc. a pulliv. Force is measured in which units?a. kilograms b. newtons c. degreesc. is negatived. is equal to the largest forced. none of thesed. m/s23.Give two examples of a pushing force AND two examples of a pulling force:Pushing Force1-Pulling Force1-2

2-2-4. Jack is going skiing. Does he need high or low friction between his skis andthe snow? Explain your answer. . .5. Jill is climbing. Where does she need high friction?Explain your answer . . . . .6. The drawing shows Samir riding his mountain bike.i) Draw a circle around the places on the drawing where thereshould be a lot of friction.ii) Explain why there should be a lot of friction in these places. . . .iii) Draw a square around a place where friction should be low.iv) Explain why there should be low friction in these places. . . .v) How can Samir make sure the friction is as low as possible in these places. . .7.i) Label the forces .Select the correct answer.ii) What two forces affect you when youfloat?(Weight and upthrust OR Mass and push)iii) When an object floats, the two forces are(the same size OR different sizes)8.The force that stops the cyclist from skidding is called . .Two forces are trying to make the cyclist slow down. They are . , . , 3

9. Label the forces on this Kayak.Use the letters next to each phrase.ABCDForward force from the paddleWater resistancegravityUp thrust10. a. What SD can friction do to moving objects?. b. What WA can friction do to things like brake pads?.c. What H and N can friction produce?. d. What E is something that can be stretched but goes back to its original shape e. What G is a force that pulls things down to Earth?.f. What W is the amount of force with which gravity is pulling down on something?11. Decide whether each picture/statement below indicates more friction or less friction.12. Name the forces:i)A force which pulls you down .ii)This force helps to hold things on fridge doors .iii)This force rubs things away .iv)This force helps a ship float .v)This type of force needs to touch something to affect it .vi)A force that slows down things moving through air .4

13. Write the forces below to show whether they are Contact or Non-Contact forces:14.Josh is learning to dive.He is seen floating in the water. Label the two forces.Josh picked up a rock from the sea bed.It was easy to lift.It felt much heavier when he carried it up the beach.Why did the stone feel lighter when it was under thewater ?15. Look at the pictures. Write the names of the forces next to the arrows.5

19. Matilda and Ravi carried out an experimentwith springs. They put different masses on thespring and measured the length of the spring eachtime. The table shows some of their results.i) Fill in the missing units in the table.ii) Fill in the missing weights in the table.(Remember that a mass of 100g has a weight of 1 Niii) Draw a graph to show the results.iv) Which is the best conclusion for this experiment.AThe bigger the mass, the larger the weight.BThe larger the weight, the longer the spring.CThe longer the spring, the bigger the weight.DThe shorter the spring, the bigger theweight.v) Ravi uses the same spring and hangs differentobjects from it. He uses his graph to work out theweight of each object. The table shows his results.Fill in the missing weights.7

20. Write whether each statement is ‘True’ ,’False’ or ‘Partly yTrueFriction always slows things down.Cars need friction to keep moving.Cars need friction to stop.You could not walk without friction.Friction is useful to gymnasts.Matches light because of friction.Friction is useful to ships.Shoe laces stay tied up because of friction.You could not pick up a a cup of tea without friction.You could drink from a glass without friction.Snow increases the friction between your shoes and the ground.Friction is useful in playgrounds.Pencils do not need friction to write.There is no friction when you are roller skating.21. The force meter measures the size of pushes and pulls.Saida used her forcemeter to start a car moving.Here is her table of results.Distance moved by the car using different sized starting forcesStarting force in NDistance moved in cm123451852140235316Describe how the size of the starting force affects the distance moved by the car.8