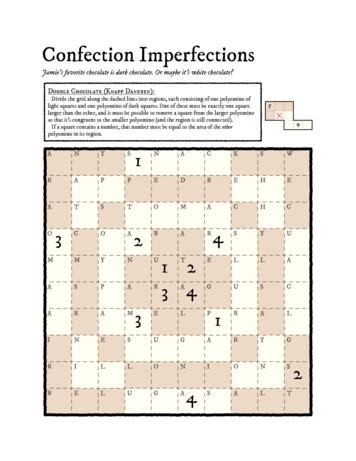 Confection ImperfectionsJamie’s favorite chocolate is dark chocolate. Or maybe it’s white chocolate?Double Chocolate (Knapp Daneben):Divide the grid along the dashed lines into regions, each consisting of one polyomino oflight squares and one polyomino of dark squares. One of these must be exactly one squarelarger than the other, and it must be possible to remove a square from the larger polyominoso that it’s congruent to the smaller polyomino (and the region is still connected).If a square contains a number, that number must be equal to the area of the otherpolyomino in its ARAMINERIBEANYSRAPATO321 23 44TELLAAGUSCELPRALSUGARYGLLONIONSLUGASALT3412

Lies in the SkyDay and night, Jamie continues to find falsehoods wherever he goes.Moon or Sun (Liar):Draw a single closed loop in the grid which enters and exits each outlined region exactlyonce. In each region, the loop must either visit all of the moons (at least one) and none of thesuns, or all of the suns (at least one) and none of the moons, and it must alternate betweenthese two choices every time it crosses a region boundary.Additionally, exactly one moon or sun in every row, column, and region is a liar and shouldbe treated as the opposite type of RTMDARTEBAAEAWOKTARORM

PassersbyJamie was amazed by the unusual cipher.Fillomino (Coprime, Digit Cipher):Divide the grid along the dashed lines into regions so that no two regions of the same areashare an edge. Inside some cells are numbers; each number must represent the area of theregion it belongs to. A region may contain zero, one, or several given numbers.Additionally, if two regions touch, their sizes may not share a common factor. Regions ofsize one are forbidden.Also, the digits 0-9 have been replaced by letters. Diﬀerent letters represent diﬀerent digits.FBAOB ABOSUBAOABAB OBFKBAABYFDAEU O H N OL XSIB L O O DX R GSV D T

Stern RobotsJamie has installed land-detecting androids at the backs of his ships.11OX011IB5ATWSEIEOW11EX011I51150SN511C0AAraf Nurikabe (Stern Robot Battleships):Place water in some cells so that each region of land contains exactly two numbers, and itsarea is strictly between those two numbers. The water cells must be orthogonally connectedand cannot contain a 2x2 square. Exactly six numbers (three in the example) are in the water.Then, place the given battleships in the grid such that the stern of each ship is on one of thenumbers in the water. Ships cannot touch, even diagonally. The number at the stern of a shipindicates the total area of all the islands pointed to by its A30AISAC6

Surprise!Jamie was Pica-shocked by this hunt’s font, and Pikmin-shocked by this puzzle’s theme.Herugolf (Pikmin):Move each of the Pikmin one or more times by performing a series of horizontal or verticalthrows. Throws cannot cross other throws or Pikmin. Each Pikmin has a nonzero rangewhich determines the length of its first throw. Each subsequent throw is one unit shorterthan the previous. If two Pikmin have the same color (red, yellow, or blue) and maturity(leaf, bud, or flower), they have the same range.When the Pikmin stop moving, they must each occupy a diﬀerent 3x3 region. Each Pikminwill then read the corresponding statement from its region, as shown on the next page.These statements must all be true. Ignore statements in unoccupied regions.(continued on next page)

Chapter 3 Sudoku: A Puzzle
Sudoku is not a math or a word puzzle. A 4x4 Example and a High-Road Transferable Strategy In this chapter, we will explore the 9x9 Sudoku puzzle. However, there are 4x4, 16x16, and other variations on this puzzle. Just for fun, try solving the two 4x4 Sudoku puzzles given in Figure 2.3. These two puzzles
5m ago
15 Views

Activity Pack for Key Stages 2 & 3 - Lord Grey Academy
Global Warming Activity Pack: KS2/3 2 This activity pack has been designed for teachers, and is intended for use by top juniors (aged 9-13 years) taking Key Stages 2 or 3 of the National Curriculum. The aim of the pack is to raise pupils’ awareness of global warming (or global climate change). The pack is flexible in that it
5m ago
23 Views

National Puzzle Day 2021 - Puzzles to Play
enjoys jigsaw puzzle assembly. A person who is involved in the science of puzzles is an enigmatologist. The fastest time ever solving a Sudoku is 1 minute 23.93 seconds. The record was set on May 20, 2006 by Thomas Snyder, an American Sudoku champion. The Stomachion is a puzzle that is at least 2,200 years old and believed to be the
5m ago
9 Views

Learn How to Solve Sudoku Puzzles With Little Effort
Sudoku puzzle can contain only one instance of each number. You complete the puzzle when all of the cells have been filled in with corresponding numbers. To complete the Sudoku puzzle requires a lot of patience as well as the ability to think logically. The basic layout of the Sudoku grid is much like a chess game or crossword puzzles.File Size: 259KB
3m ago
66 Views

SDTM Trial Summary Domain: Putting Together the TS Puzzle
Table 1: Trial Summary Variable Structure from the SDTMIG1 TRIAL SUMMARY PARAMETERS (TSPARMCD/TSPARM) – THE INTERIOR PUZZLE PIECES Within the variable structure of the TS puzzle, are the ‘interior pieces’ or parameters (i.e., the data) that must be fit together to provide a complete picture of a study.
5m ago
72 Views