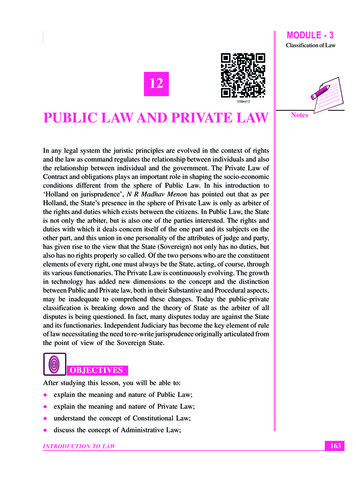 MODULE - 3Public Law and Private LawClassification of Law12PUBLIC LAW AND PRIVATE LAWNotesIn any legal system the juristic principles are evolved in the context of rightsand the law as command regulates the relationship between individuals and alsothe relationship between individual and the government. The Private Law ofContract and obligations plays an important role in shaping the socio-economicconditions different from the sphere of Public Law. In his introduction to‘Holland on jurisprudence’, N R Madhav Menon has pointed out that as perHolland, the State’s presence in the sphere of Private Law is only as arbiter ofthe rights and duties which exists between the citizens. In Public Law, the Stateis not only the arbiter, but is also one of the parties interested. The rights andduties with which it deals concern itself of the one part and its subjects on theother part, and this union in one personality of the attributes of judge and party,has given rise to the view that the State (Sovereign) not only has no duties, butalso has no rights properly so called. Of the two persons who are the constituentelements of every right, one must always be the State, acting, of course, throughits various functionaries. The Private Law is continuously evolving. The growthin technology has added new dimensions to the concept and the distinctionbetween Public and Private law, both in their Substantive and Procedural aspects,may be inadequate to comprehend these changes. Today the public-privateclassification is breaking down and the theory of State as the arbiter of alldisputes is being questioned. In fact, many disputes today are against the Stateand its functionaries. Independent Judiciary has become the key element of ruleof law necessitating the need to re-write jurisprudence originally articulated fromthe point of view of the Sovereign State.OBJECTIVESAfter studying this lesson, you will be able to:zexplain the meaning and nature of Public Law;zexplain the meaning and nature of Private Law;zunderstand the concept of Constitutional Law;zdiscuss the concept of Administrative Law;INTRODUCTION TO LAW163

MODULE - 3Public Law and Private LawClassification of Lawzdefine Criminal Law;zlist the differences between Public and Private Law; andzdiscuss the role of Judges in shaping Law12.1 MEANING AND NATURE OF PUBLIC LAWNotesPublic Law is that part of law, which governs relationship between the State(government/government agencies) with its subject and also the relationshipbetween individuals directly concerning the society. According to Loughlin,‘Public law is a form of political jurisprudence that incorporates no transcendentalor metaphysical ideas of justice and goodness; it is concerned solely with thoseprecepts of conduct that have evolved through political practice to ensure themaintenance of the public realm as an autonomous entity.’The Public Law deals with the social problems in the broad context and mayinclude the following heads: Constitutional Law, Administrative Law, CriminalLaw and Criminal Procedure, Law of the State considered in its quasi privatepersonality, Procedure relating to the State as so considered and Judge madeLaw.In short, Public Law governs relationship between the State with its citizensand also relationship between individuals directly concerning the Society.Constitutional Law, Administrative Law, Criminal Law and Criminal Procedureare the subject matter of Public Law.12.1.1 Constitutional LawThe primary function of Constitutional Law is to ascertain the political centerof gravity of any given State postulating the supremacy of law in the functioningof State. In India, the Constitution makes India: Sovereign, Socialist, Secular,Democratic, Republic with a Federal System with Parliamentary form ofGovernment in the Union and the States; and with an Independent Judiciary. Italso establishes the structure, procedures, powers and duties of the governmentand spells out basic human rights which are fundamental in the governance ofNation in the form of Fundamental Rights and Directive Principles of State Policy.Constitutional Law is a branch of Public Law. It determines the politicalorganization of the State and its powers, while also setting certain substantiveand procedural limitations on the exercise of governing power. ConstitutionalLaw consists of the application of fundamental principles of law based on thedocument, as interpreted by the Supreme Court. In the words of Salmond,“Constitutional Law is the body of those legal principles which determine the164INTRODUCTION TO LAW

Public Law and Private LawMODULE - 3Classification of LawConstitution of a State- i.e., the essential and fundamental portions of the State’sorganization.”12.1.2 Administrative LawAs per Holland, Administrative Law provides for the manner of activities orthe various organs of the Sovereign Power as provided by the Constitution. Inthis sense Administration has been defined as ‘the exercise of political powerswithin the limits of the Constitution as the total concrete and manifoldly changingactivity of the State in particular cases as the functions, or the activity, of theSovereign Power’. It may fairly be said to include the making and promulgationof laws; the action of the government in guiding the State in its foreign relations;the administration of justice; the management of the property and businesstransactions of the State; and the working in detail, by means of subordinatesentrusted with a certain amount of discretion, of the complex machinery bywhich the State provides at once for its own existence and for the generalwelfare. It deals, with the collection of the revenue, the collection of statistic,international trade, manufacturing, pollution, taxation, and the like. This issometimes seen as a sub-category of Civil Law and sometimes seen as PublicLaw as it deals with regulation and public institutions. The Administrative Lawsare enforced by the executive branch of a Government rather than the judicialor legislative branches (if they are different in that particular jurisdiction).According to Vago Steven, “Administrative Law is a body of the law createdby administrative agencies in the form of regulations, orders, and decisions.”Notes12.1.3 Criminal LawThe most important of the functions of the State is that which it discharges asthe guardian of order; preventing and punishing all injuries to itself, and alldisobedience to the rules which it has laid down for the common welfare. Indefining the orbit of its rights in this respect, the State usually proceeds by anenumeration of the acts which infringe upon them, coupled with an intimationof the penalty to which any one committing such acts will be liable. The branchof law which contains the rules about this subject is accordingly described as‘Criminal law’. Criminal Law denotes wrongs against the State, community, andpublic. Adjective Criminal Law,’ Penal Procedure,’ Instruction Criminology,’ isthe body of rules whereby the machinery of the Courts is set in motion for thepunishment of offenders.‘Criminal Law is concerned with the definition of crime and the prosecution andpenal treatment of offenders’. Although a criminal act may cause harm to someindividual, crimes are regarded as offenses against the State or “the people.”A ‘crime’ is a “public” as opposed to an “individual” or “private” wrong. It isthe State, not the harmed individual that takes action against the offender.INTRODUCTION TO LAW165

MODULE - 3Public Law and Private LawClassification of LawINTEXT QUESTIONS 12.1Notes1.2.3.4.Explain briefly Constitutional Law.Define ‘Criminal Law’?What do you understand by ‘Administrative Law’?Define Public Law.12.2 MEANING OF PRIVATE LAWPrivate Law is concerned with the relationship between individuals with oneanother or private relationship between citizens and companies that are not ofpublic importance. In the case of Private Law the role of the State is merelyto recognize and enforce the relevant law and to adjudicate the matters in disputebetween them through its judicial organs. Private Law as per Holland issubstantive and defines the rights of individuals or it may be adjective indicatingthe procedure by which rights are to be enforced or protected.In simple words Private Law governs the relations of citizens with each other.Law of Torts, Law of Contract, Private and Intellectual Property Rights are thesubject matters of Private Law.12.2.1 Private Substantive LawThe study of Private Law commences with the consideration of the SubstantiveLaw of the various species as follows:1. Normal Substantative Rights are the Antecedent Rights. The antecedentrights may be ‘in rem’ or ‘in personam’. The antecedent rights ‘in rem’ arerights which, irrespectively of any wrong having been committed, areavailable for the benefit of the person of inherence against a person ofincidence so unlimited so as to comprise the whole world. Example: rightto personal freedom, reputation, possession and ownership.The rights ‘in personam’ are those available rights against a definite personand may arise out of agreement of the parties or by virtue of duty castedby law. Example: right of one member of family against another, right ofperson for action against surgeon for want of skill.Illustration: ‘X’ has land. He/she enters in to contract with gardener tomaintain his/her land for one year. Here general duty is on the whole worldnot to trespass on land of ‘X’. The gardener, however, owes special dutyto ‘X’ over and above the duty owed to him/her by the entire world.Normal substantive rights may also be ‘Remedial’ –the objective of the rightis either restitution or compensation. Remedial Rights as a rule are availablein personam against the wrongdoer.2. Abnormal Antecedent Rights–abnormal can be natural individual humanbeings (minors infants, lunatics convict) or artificial i.e. aggregate of humanbeings or of persons property which are treated by law as individual humanbeing (associations, foundation, corporation).166INTRODUCTION TO LAW

Public Law and Private LawMODULE - 3Classification of Law12.2.2 Private Adjective LawThe Substantive Law affecting the State as a quasi-private juristic personality issupplemented by a body of adjective rules, prescribing the mode in which the State,as such a personality, may sue or be sued. Adjective Law, no less than SubstantiveLaw may be normal or abnormal and the position with respect to artificial personsand such varieties of natural persons as pointed above are different with referenceto suing and being sued from that occupied by ordinary individuals.NotesAccording to Bernard Rudden Private Law deals with the legal relations betweenpersons. It covers matters of pure status (marriage, divorce, kinship and so on);matters involving assets of some sort (property, succession, contracts); andcommercial activities in the wider sense. Its essential feature is that theparticipants are presumed to be juridically equals (unlike the public law structurewhere relations are hierarchical) so that one cannot give orders to another, unlessso authorised under some previous contractual or family arrangement. Itsessential technique is that much of it is not automatically binding (jus cogensin lawyers’ language) but serves to cut down the cost of legal transactions byproviding a set of patterns which citizens may use if they wish. For instancethe intestacy rules operate only if a person dies without having made a will. Therules on sale, lease, loan, partnership and so on are there as models which canbe adopted in full or modified if the parties so desire. Despite the manydifferences on the surface and in particular detailed rules, the overall structureof Private Law in both Civil and Common-Law Systems can be stated quitesimply in a formula derived ultimately from the Roman jurists: Private Law dealswith persons, property, obligations and liability.Thus, it can be said that Private Law includes (i) Law of obligations /Law ofContract (organizes and regulates legal relations between individuals undercontract) (ii) Law of Tort (addresses and remedies issues for civil wrongs, notarising from any contractual obligation). (iii) Law of Property (iv) Law ofSuccession, (v) Family Laws- family rights against abduction and adultery.INTEXT QUESTIONS 12.21. Define Private Law.2. Distinguish between antecedent right ‘in rem’ with right ‘in personam’.3. What is ‘Private Adjective Law’?12.3 DISTINCTION BETWEEN PUBLIC AND PRIVATELAWTo determine the conception of Public, as opposed to Private, Law dates backto the Romans, who say of it ‘ad statum rei Romanae spectat,’ ‘in sacris, inINTRODUCTION TO LAW167

INTRODUCTION TO LAW MODULE - 3 Public Law and Private Law Classification of Law 164 Notes z define Criminal Law; z list the differences between Public and Private Law; and z discuss the role of Judges in shaping Law 12.1 MEANING AND NATURE OF PUBLIC LAW Public Law is that part of law, which governs relationship between the State

ANALYSIS OF FUNDING STREAMS FOR PUBLIC PRIVATE .
A public-private partnership is a contractual agreement formed between public and private sector partners, which allows more private sector participation than is traditional. The agreements usually involve a government agency contracting with a private company to renovate, construct, operate, maintain, and/or manage a facility or system.
5m ago
11 Views