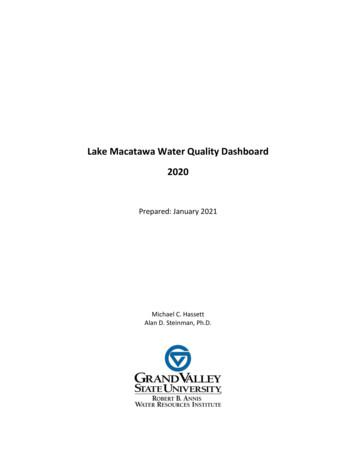 IntroductionAs part of Project Clarity, Grand Valley State University’s Annis Water Resources Institute (AWRI)established a monitoring program on Lake Macatawa in 2013. The goal of the monitoring program is toevaluate and document the progress toward achieving Project Clarity’s goal of improved water quality inLake Macatawa. The monitoring program involves sampling the lake 3 times per year for a suite ofbiological, physical, and chemical parameters. Hence, information is not collected continuously and mayeither capture or miss episodic, short-term conditions. The value of the dashboard is an assessment oflong-term trends, not of short-term events.Key water quality indicators were selected from the many parameters that are monitored to create awater quality dashboard for Lake Macatawa (see full annual report for all parameters). The goal of thedashboard is to provide a visual representation of the current status and historical trends in LakeMacatawa water quality, by rating each indicator along a scale from desirable (green) to undesirable(red) conditions. Each scale also includes a category that indicates the water quality goal for the lake isbeing met (yellow). The indicators that were chosen are commonly used to assess lake health: totalphosphorus concentration, chlorophyll a concentration, and Secchi disk depth (water clarity). Eachindicator is described in more detail below.Historical data are included in the dashboard to facilitate comparison of current findings with past statusof the selected water quality indicators. Sources for historical data include U.S. EPA (1972; STORET),Michigan Department of Environment, Great Lakes, and Energy (formerly MDEQ; 1982-2012; S. Holden,personal communication), and AWRI (since 2013). All current and historical data shown represent theannual average value of an indicator across Sites 1 (east basin), 2 (central basin), and 4 (west basin; seemap below).Map of Lake Macatawa showing the 5 sampling locations (green dots) for long-term water quality monitoring.Dashboard indicators were calculated based on data from Sites 1, 2, and 4.3

Total Phosphorus2020 Mean Concentration: 86 µg/LTarget Concentration: 50 µg/LPhosphorus (P) is an essential element for living organisms. In many freshwater systems, P is theelement that limits algal growth. However, when it becomes too abundant, it can help stimulateundesirable algal blooms. Phosphorus comes in many forms; we selected Total Phosphorus (TP) as thedashboard indicator because it includes all the forms of P in the lake (i.e., particulate and dissolved).Lake Macatawa has a history of extremely high TP concentrations (i.e., 100 µg/L), placing it in the pastin the “hypereutrophic” trophic state. As a result of this nutrient enrichment, the State of Michiganestablished an interim target TP concentration of 50 µg/L in Lake Macatawa. Thus, the TP dashboardshows the water quality goal as being met when TP concentrations are 50 µg/L. While attaining thisgoal would be a significant improvement in water quality from current conditions, Lake Macatawawould still be in an impaired “eutrophic” state, which we define as TP concentration 24 µg/L.Therefore, the TP dashboard shows the ultimate desired TP concentration as 24 µg/L.The current status for the total phosphorus indicator is Undesirable, meaning that the average TPconcentration in 2020 exceeded the water quality goal. Although the average TP concentration in recentyears remains greater than the target of 50 µg/L, the overall trend shows a decline since the start ofProject Clarity.4

Secchi Disk Depth (Water Clarity)2020 Mean Depth: 0.59 m ( 1.9 ft)Target Depth: 1 m ( 3.3 ft)Secchi disk depth is an estimate of water clarity. It is measured using a standard black and white disk,named after the Italian priest Angelo Secchi, who first used an all-white disk for marine waters in 1865.Lake ecologists modified it to black and white in the late 1800s. The Secchi disk is a simple and easy wayto measure water clarity, although if waters are cloudy, the disk depth tells you nothing about why thelake is turbid (e.g., is it due to suspended algae or suspended sediment?).Along with excess phosphorus and chlorophyll a concentrations, Secchi depths have historicallyreflected extremely impaired conditions in Lake Macatawa. Oligotrophic lakes, such as Lake Tahoe, haveSecchi disk depths down to 21 m ( 70 ft) or deeper. Conversely, hypereutrophic lakes, such as LakeMacatawa, typically have Secchi depths shallower than 1 m ( 3 ft). The water clarity goal for LakeMacatawa is modest, with a Secchi depth 1 m. Because Secchi depths between 1 and 2 m areindicative of a eutrophic state, a desirable Secchi depth is 2 m.The current status for the Secchi depth indicator is Undesirable, meaning that the average Secchidepth in 2020 was shallower (i.e., less clear) than the water quality goal. Secchi depth in 2020 remainsvery similar to the past few years.6

Total Phosphorus and PrecipitationPhosphorus concentrations in Lake Macatawa are influenced by many variables, but one of the mostsignificant is precipitation because rain and snow events create runoff from farms and urban areas,when phosphorus can be transported to Lake Macatawa either in the dissolved form or as attached tosediment particles; precipitation also results in atmospheric deposition, which can contributephosphorus directly to the lake and landscape. As a consequence, it is of interest to know if annualchanges in lake phosphorus concentrations are related to precipitation.To answer this question, we examined total phosphorus (TP) concentrations in the lake, based on datafrom EGLE and AWRI (sampled 3 per year at 3 sites), and compared them to precipitation data from theTulip City Airport in Holland. As seen above, between 1972 and 2020, the relationship betweenprecipitation and TP concentration in the lake is not directly related; for example, some years have veryhigh TP concentrations but relatively low precipitation (e.g., 2000 and 2004), whereas other years havemodest levels of TP but relatively high precipitation (e.g., 2017). Indeed, the statistical relationshipbetween the two is not significant (R2 0.002; p 0.838).Interestingly, the relationship between TP and precipitation is much improved since 2013 (R2 0.382; p 0.102) but is still not statistically significant. This relationship is based on only 8 data points, so itshould be viewed cautiously. We view these data as appropriate only for screening purposes, as the TPconcentrations are means of seasonal lake sampling events, which likely miss pulses of high Pconcentrations after storm events.7

As part of Project Clarity, Grand Valley State University’s Annis Water Resources Institute (AWRI) . Dashboard indicators were calculated based on data from Sites 1, 2, and 4. 4 . relatively simple way to estimate the amount of algal biomass present in lake water, although it has some

Walker Lake Tui Chub Genetics Report - FWS
Walker Lake, a terminal saline lake fed by the Walker River in Walker River Basin, Nevada, was once part of the ancient Pleistocene Lake Lahontan. Lake Lahontan covered much of Northwestern Nevada and began to recede from its last highstand, or peak 12,500ya, leaving Walker Lake and Pyramid Lake today as the main remnants today.
6m ago
15 Views

BIG LAKE, SKAGIT COUNTY 2011
Big Lake is located approximately 5 miles southeast of Mt. Vernon, Washington in Skagit County. The lake is 520 acres in size and is the largest lake within Skagit County. The average lake depth is 14 feet with the maximum being 23 feet. The Big Lake watershed . foot Lund mapping vessel equipped with ArcGIS mapping equipment including a Trimble
6m ago
18 Views

Data visualization: an exploratory study into the software .
dashboard was the difficulty to include data labels on the dashboard. Figure 2. Power BI Dashboard Tableau When completing the next dashboard, the researchers created it using Tableau (Figure 3). When creating a dashboard using Tableau, the researcher found it to be quite similar to the functionality of Excel, but was easier to create graphs.
9d ago
5 Views

KPI Dashboard
This Fáilte Ireland template provides a KPI analysis for the whole business and also by department. 2. The Structure of the Excel template The Excel template is comprised of five distinct tabs: Input Data, Main KPI Dashboard, Admissions Dashboard, F&B and M&E Dashboard and Retail Dashboard. It should be noted that all of the
5d ago
2 Views

Dashboard Tools and Features - User Manual
Dashboard 'Area' is always positioned centrally on the dashboard page and at any time set 'Area' size with the button on the right. Arranged positions and sizes of dashboard tiles are respected while exporting dashboard to PDF (Simple Exp
7d ago
1 Views
Popular Tags
Recent Views