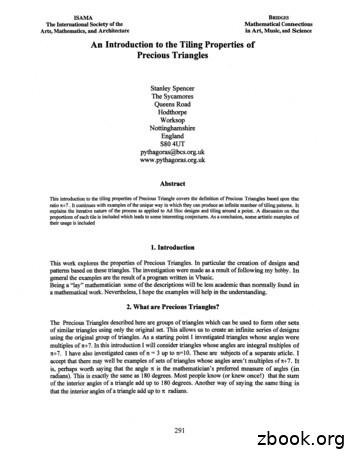 ISAMABRIDGESMathematical Connectionsin Art, Music, and ScienceThe International Society of theArts, Mathematics, and ArchitectureAn Introduction to the Tiling Properties ofPrecious TrianglesStanley SpencerThe SycamoresQueens thagoras@bcs.org.uk .www.pythagoras.org.ukAbstractThis introduction to the tiling properties of Precious Triangle covers the definition of Precious Triangles based upon theratio 7t 7 It continues with examples of the unique way in which they can produce an infinite number of tiling patterns. Itexplains the iterative nature of the process as applied to Ad Hoc designs and tiling around a point. A discussion on theproportions of each tile is included which leads to some interesting conjectures. As a conclusion, some artistic examples of .their usage is included1. IntroductionThis work explores the properties of Precious Triangles. In particular the creation of designs andpatterns based on these triangles. The investigation were made as a result of following my hobby. Ingeneral the examples are the result of a program written in Vbasic.Being a "lay" mathematician some of the descriptions will be less academic than normally found ina mathematical work. Nevertheless, I hope the examples will help in the understanding.2. What are Precious Triangles?The Precious Triangles described here are groups of triangles which can be used to form other setsof similar triangles using only the original set. This allows us to create an infmite series of designsusing the original group of triangles. AB a starting point I investigated triangles whose angles weremultiples of 1t 7. In this introduction I will consider triangles whose angles are integral multiples of1t 7. I have also investigated cases of n 3 up to n 10. These are subjects of a separate article. Iaccept that there may well be examples of sets of triangles whose angles aren't multiples of 1t 7. Itis, perhaps worth saying that the angle 1t is the mathematician's preferred measure of angles (inradians). This is exactly the same as 180 degrees. Most people know (or knew once!) that the sumof the interior angles of a triangle add up to 180 degrees. Another way of saying the same thing isthat the interior angles of atriangle add up to 1t radians.291

3. Precious Triangles based on 1t17.There are only four unique triangles whose angles are multiples of 1t 7. (for those who prefer degrees1t 7 I8017 2S.714286 degrees to six decimal places. This is another reason for using 1t 7.QRsFigure 1: four Precious Triangles forming a trapezoidI have called the trianglesA[I,I,S]B[I,2,4]qI,3,3] and D[2,2,3].A[I,I,S] means that for triangle A its angles have values 1t 7,1t 7 and S1t 7. Note the three numbersmust add up to seven since the angles of a triangle add up to 1t radians. (or 180 degrees). Any othertriangle using only multiples of 1t 7 will be similar to one of these four.To qualify as Precious Triangles we must be able to create another set of four larger but similartriangles. In addition, the larger ones must have the same enlargement ratio.Figure 2 illustrates how four similar triangles can be created from the original four triangles. It is easyto show that each large triangle is larger by a factor of 1 2cos(27t17) which has a value of2.2469796,which just happens to be B(7)-I whereB(7) is the seventh Beraha number [1] I call this Ratio thePrecious Ratio. As a matter of interest this is not the only regime for 1t 7. Each triangle in figure 2is similar to the one to its left. Each triangle is larger by a factor of 2.246. I have coined the termPrecious Ratio for this number. I have called this Ratio the Precious Ratio because I found that mysimilar work with triangles based upon 1t S resulted in the golden ratio [2] as the enlargement factor.4. Geometry of the four trianglesWith reference to figure 1, the trapezoid PQRS is constructed such thatPQ QR RS dThe points T and U are such thatSU ST dThere are three distances to calculate UQ, TP and URQS 2dcos(7tl7) 1.8019377dHence UQ O.8019377dAnd TP 2dcos(21t/7) I.2469796dAnd UR 2dcos(31t/7) O.44S0419dComparing the lengths of corresponding sides for the similar triangles above it is quite easy to showthat each triangle has an enlargement factor of 1 2cos(21t17) which equals 2.2469796 [3].292

Figure 2: Enlargement regime for the Precious Triangles5 Recursive Tiling PatternsThe trapezoid design PQRS can be constructed from the four triangular tiles A,B,C and D. Asmentioned earlier they are the only four triangles whose angles are multiples of 7t17. It is possible toconstruct a similar, larger trapezoid using the regime described in figure 2. It is important to note thatthe new design uses the same four tiles. This process could be repeated an infinite number of times.Each time a larger but similar design is produced, each being larger by a factor of 2.2469796 or thePrecious Ratio. This process can be performed on any design, provided it is based on the original fourtriangles.Figure 3: Application of the tiling regime to the trapezoid293

6 The HeptagonIf lines connecting the vertices of the heptagon are drawn then the triangles so formed happen to besimilar to the Precious Triangles based on n17. Unsurprisingly, therefore, the regular heptagon can befilled with the four Precious Triangles shown in figure 1. Figure 4 shows one way of achieving this. Figure 4: Four generations o/the heptagon/ormedfrom Precious TrianglesFigure 5: An example 0/ an Ad Hoc design called "The Alien"294

7. An example of an Ad Hoc DesignFigure 5 is an example of an Ad Hoc or improvised design: that is a design which has no particularstructure or systematic constraint This one I have called "The Alien". The smallest Alien, on the leftis created from the four triangles. As we move to the right, each larger alien is created by repeatedapplication of the regime. Each design uses only the original four triangles. If you look carefully it ispossible to make out the lines of the original triangles.8. Tiling around a PointIf we examine the four triangles, we notice that there are five different dimensions for the sides.Furthermore, the angles are multiples of n/7. This means that all the points of the triangles tessellatingaround a point lie on the comers of five concentric 14-ogons. Figure 6 illustrates the start of fourdesigns. Completed designs are shown in figure 7. Figure 8 shows the design after a single iteration andfigure 9 the result after 4 iterations.Figure 6: Tiling around a pointFigure 7: completed examples oftiling arounda pointFigure 9: the fourth generation tiling.Figure 8: the first generation tiling.295

10 Some interesting Ratios.The only ratio introduced so far is the Precious Ratio for the group of triangles. This ratio is the scalefactor for the size of consecutive transformations and is denoted by Pr, wherePr 1 2cos(2nl7) 2.2469796 approximatelyThis turns out to be B(7) - 1 where B(7) is the seventh Beraha constant.! have found that the PreciousRatio in cases other than nl7 also seem to be related to the Beraha Constant in a similar way. Why thisis so will be the topic of a future investigation.The results of a simulation [3] would suggest that the proportions for each triangle are0.170915 for the A[1,1,5]0.13706 for the B[1,2,4]0.30797 for the q1,3,3]And 0.38404 for the D[2,2,3]The thing that I found most interesting was that these proportions are independent of thenumbers of each triangle in the original designs. The simulations for the fIrst 8 recursions for thetrapezoid, Alien, heptagon and for a single A[1,1,5] all resulted in the same proportion of eachtriangle in the fmal design.Something that I found a little more amazing was that the ratioA:Bn tends to Pr - 1An:Dn tends to 1IPrand An:Cn tends to 1 - IIPrWhere Pr is the Precious Ratio for the group of trianglesThe results of a simulation exercise confIrm these conjectures to an accuracy of six decimal places.I was somewhat more surprised when I simulated the ratios for the designs that kept the D[2,2,3]triangles and not transformed them. (see fIgure 10). Although it appears that the D triangles fill thedesign from an area point of view, it is far from true from a numbers point of view.It appears from a simulation that the ratios of tiles, in this case, relate to the golden ratio rather thanthe Precious Ratio.Ifwe denote the golden ratio as Or then the ratioAn:Bn tends towards OrDn:An tends towards Or/\2Dn:Bn tends towards Or"3Dn:Cn tends towards OrAnd An:Cn tends towards Or - 1The results of a simulation confIrm the conjecture to an accuracy of six decimal places. Whilst I wasn'ttoo surprised to fmd the golden ratio with nl5 triangles it was unexpected with nl7. I have been ableto prove some of these results for nl7 and n15. [3].297

11 Est Werde LichtThe story of the creation in the first book of Genesis is, probably, the earliest scientific account everrecorded. The sequence of events contains a degree of logic and insight into the natural world,especially remarkable as it was first written thousands of years ago. The geometry consists of sevenPrecious Triangle designs, one for each day. The first depicts the creation of energy in the form oflight.The second depicts the formation of water on earth, this being separate from the water in other galaxies.The third depicts the formation of dry land. The earth is embraced by the branches of a tree whichsupports the ecology of the world. The fourth depicts the sun, moon and stars. Their significance andmagnitude were not appreciated when Genesis was written and hence may seem out of order from theviewpoint of modern science. Next the fish and birds are created in a sensible evolutionary order. Thesixth depicts Adam, sitting on his haunches watching over the beasts in the fields. The seventh depictsAdam on the seventh day. Notice Adam's lines of symmetry, to denote the reflective nature of theSabbath.Figure 14: These designs representthe seven days of the creation asdepicted in Genesis13. References[1] Weisstein, Eric W (Accessed 6.6.2002) Beraha Constants http://mathworld.wolfram.com [2] Weisstein, Eric W (Accessed 6.6.2002) Golden Ratios http://mathworld.wolfram.com [3] Spencer, Stanley J (2002) Tutorial notes for ASAMA Conference http://pythagoras.org.uk 298

The Precious Triangles described here are groups of triangles which can be used to form other sets of similar triangles using only the original set. This allows us to create an infmite series of designs using the original group of triangles. AB a starting point I investigated

Islamic Constructions: The Geometry Needed by Craftsmen
International Joint Conference of ISAMA, the International Society of the Arts, Mathematics, and Architecture, and BRIDGES, Mathematical Connections in Art Music, and Science, University of Granada, Spain, July, 2003 460 triangle with legs each one unit in length. The geometer would appeal to the Pythagorean theorem to
1m ago
6 Views

Country Music in Knoxville - Knox Heritage
Country Music is a blend of popular music originally found in the Southern United States and the Appalachian Mountains. It has roots in traditional folk music, Celtic music, gospel music and old-time music and it evolved rapidly in the 1920’s. Early history Immigrants to the Southern Appalachian Mountains of North America brought the music and
6m ago
34 Views