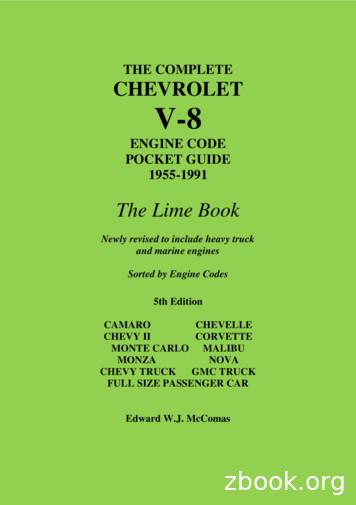 The author has made his best effort in thecompilation and preparation of the information inthis book. However, inaccuracies may occur.The author makes no warranty of any kind withregard to the information in this book.Published by AME Publishing CompanyHuntsville, ALLibrary of Congress Control Number:2010904125ISBN: 978-0-9649292-3-4Fourth EditionSecond PrintingCopyright 1995 by Edward W. J. McComasAll rights reserved. Printed in the United Statesof America. No part of this book may be used orreproduced in any form without writtenpermission from the publisher.

CHEVROLET V-8 ENGINE IDENTIFICATIONIdentifying a Chevy V-8 engine is not simply a matter of checkingthe engine suffix code. Chevrolet reused (perhaps recycled is abetter word) engine suffix codes from one year to the next. It is notuncommon to find an engine suffix code that represents a high horsepower big block engine one year; and have the very same enginesuffix code represent a low horse power small block engine the nextyear.The correct method for identifying an engine by the suffix code is atwo part process. Step one is to identify the model year (notnecessarily the calendar year) of the engine. This is done bylocating and deciphering the engine casting date code. The blockcasting number may also be of benefit in helping to determine thedate range of a particular engine.Step two is to match the engine suffix code, and the date code, withthe engine suffix codes listed in this book. This will accuratelyidentify the engine as to cubic inches, horse power rating,equipment, and vehicle application.A special note concerning the “truck big block” engine isappropriate here. The 366 and 427 “truck” engines are differentblock castings than the automobile big block engines. These blocksare not interchangeable.The 366 / 427 truck blocks areapproximately 0.4 of an inch “taller” than the automobile big blocks.Engine suffix codes listed for 366 and 427 engines, where theautomobile type is identified as “TR”, are truck big block engines.

CHEVY V-8 ENGINE PLANT STAMP FORMATThe Chevrolet engine plant stamp format has changed somewhatover the years, but it provides a wealth of information for those whoknow how to read it. All 1955 and most 1956 Chevy V-8 enginesused an engine plant stamp format like the following:0I04563F56FG which breaks down to:0I04563 the sequence number of the engineF the engine plant (Flint, Michigan)56 model year of engine productionG engine suffix codeLate in the 1956 model year, Chevrolet changed the format of theengine plant stamp. The revised format for 1956 simply deleted theengine sequence number, so the format would look like ‘F56G’.The format was changed again for the 1957 model year. The newformat has been used on all Chevrolet V-8 engines through 1991.The new format is:T02I4ITwhich breaks down to:T the engine plant (Tonowanda, New York)02I4 engine assembly date (Feb. 14th)IT engine suffix codeNotes:1. Leading zeros for the engine assembly month were not used from1957 to mid January of 1960. The actual date of change appears tobe between Friday January 15, 1960 and Monday January 18, 1960.2. The letter 'I' is used in place of the digit '1' in pad stamps, exceptfor the VIN derivative stamp.

CHEVY V-8 ENGINE ASSEMBLY DATEThe engine assembly date is typically a three or four digit number,where the first one or two digits represent the month(1 Jan 12 Dec), and the last two digits represent the day of themonth (01 to 31). It is important to note that the engine plants didnot use the ‘1’ character. The letter ‘I’ is used to represent a ‘1’.This is sometimes confusing, since the assembly date and the suffixcode run together. As an example: a front pad stamp of ‘F4IID’might be mistaken as having a suffix code of ‘IID’. The actualsuffix code in this case is simply ‘D’. The ‘II’ represents the day ofthe month of engine assembly.The Chevrolet engine plant designations are as follows:F Flint, MI (1955-1966)V Flint, MI (1967 and up)T Tonowanda, NYK St Catherine, Ontario, CanadaS Saginaw, MIM Mexico

“CE” CHEVY V-8 ENGINE CODEMany Chevrolet V-8 engines are stamped with a “CE” engine codeon the front pad. This “CE” code is usually followed by a series ofdigits. The stamping on the front pad does not follow the usualpattern of the engine plant, followed by the engine assembly date,followed by the engine suffix code.The “CE” engine code is not really an engine code. “CE” stands for“Chevrolet Engine” and indicates that this engine is a servicereplacement engine. “CE” engines were used by dealerships toreplace bad engines under warranty, as well as being sold tocustomers over the parts counter. The majority of “CE” engineswere manufactured during the 1960s and 1970s.It is not possible to determine what the engine type is on a “CE”engine. Chevrolet stamped the majoring of their replacementengines with “CE”, regardless of the engine type.

ENGINE CODE CARBURETOR DESIGNATIONThe format of a Chevy V-8 engine code is 1, 2, or 3 alphanumericcharacters, usually located at the end of the assembly date.Chevrolet used 1 or 2 characters for suffix codes from 1955 through1969. Engine codes from 1970 and up use 3 characters. However,exceptions to these rules do exist.Many Chevy small and big block engines manufactured around1966 had a three character engine suffix code, where the lastcharacter is an ‘H’ or an ‘R’. This third character represents thecarburetor type that was to be used on that engine. So, ‘H’ wouldrepresent Holley, and ‘R’ would represent Rochester. This situationappears to be true only for certain engines equipped with four barrelcarburetors.So, as an example, an engine with the following information:Casting Date – B2766Engine Code – IVRwould be a 1966 (determined from the casting date) 396 engine,rated at 325 hp, equipped with a Turbo-Hydramatic transmission,installed in a passenger car (the ‘IV’ portion of the engine code),and equipped with a Rochester four barrel carburetor (the ‘R’portion of the engine code).