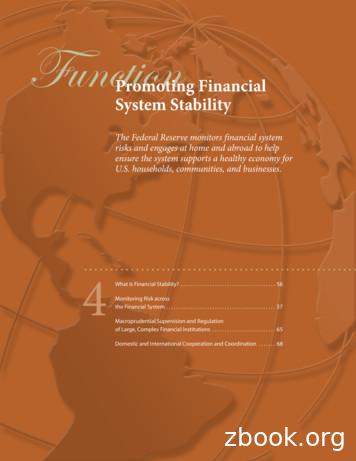 The Federal Reserve was created in 1913 to promote greater financialstability and help avoid banking panics like those that had plunged thecountry into deep economic contractions in the late nineteenth andearly twentieth centuries.Over the past century, as the U.S. and global financial system haveevolved, the Federal Reserve’s role in promoting financial stability hasnecessarily changed with it. The 2007–09 financial crisis and the subsequent deep recession revealed shortcomings in the financial systeminfrastructure and the framework for supervising and regulating it (seefigure 4.1). Indeed, reforms enacted under the Dodd-Frank Wall StreetReform and Consumer Protection Act of 2010 assigned the FederalReserve new responsibilities in the effort to promote financial systemstability and keep pace with changing dynamics and innovation in thebroader economy.Figure 4.1. The financial system: key participants and linkagesKey participants in the U.S. and global financial system include the lenders and savers who are matched up with borrowersand spenders through various markets and intermediaries. The Federal Reserve monitors the financial system to ensure thelinkages among these three entities are well-functioning and adjusts its policymaking or engagement with other policymakersto address any emerging concerns.Indirect financeFinancial nder-saversBorrower-spendersHouseholdsBusiness firmsGovernmentsForeign entitiesInvesting/fundingDirect financeFinancial marketsInvesting/fundingBusiness firmsGovernmentsHouseholdsForeign entitiesSource: Adapted from Frederic S. Mishkin and Stanley G. Eakins, Financial Markets and Institutions, 7th Edition (Boston:Prentice Hall, 2012), 16.The Federal Reserve System Purposes & Functions55

What Is Financial Stability?A financial system is considered stable when financial institutions—banks, savings and loans, and other financial product and service providers—and financial markets are able to provide households, communities, and businesses with the resources, services, and products theyneed to invest, grow, and participate in a well-functioning economy.These resources and services include business lines of credit, mortgages, student loans, and the othercritical offerings of a sophisticated financial system; and savings accounts, brokerage services, and retirement accounts,among many others.Effective Linking of Savers and Investorswith Borrowers and BusinessesA healthy and stable financial system links, at the lowest possible cost,savers and investors seeking to grow their money with borrowers andbusinesses in need of funds. If this critical role of intermediation between savers and borrowers is disrupted in times of stress, the adverseimpact will be felt across the economy.And such disruption can carry a very high price. As a result, financialstability in its most basic form could be thought of as a conditionwhere financial institutions and markets are able to support consumers,communities, and businesses even in an otherwise stressed economicenvironment.Keeping Institutions andMarket Structures ResilientTo support financial stability, it is critical that financial institutions andmarket structures are resilient, so that they are able to bend but not56Promoting Financial System Stability

Box 4.1. Financial Stability and the Founding of the Federal ReserveFinancial stability considerations were a key element in the founding of the Federal Reserve System. Indeed, it was created inresponse to the Panic of 1907, which was at the time the latest in a series of severe financial panics that befell the nation inthe late nineteenth and early twentieth centuries.The 1907 panic led to the creationof the National Monetary Commission, whose 1911 report was a majorimpetus to the Federal Reserve Act,signed into law by President WoodrowWilson on December 23, 1913. Uponenactment, the process of organizingand opening the Board and the ReserveBanks across the country began. OnNovember 16, 1914, the FederalReserve System began full-fledgedoperations.energies of the nation which is thequestion of vital importance.”In the words of one Federal Reserve Actauthor, U.S. Senator Robert LathamOwen of Oklahoma, “It should alwaysbe kept in mind that . . . it is theprevention of panic, the protection ofour commerce, the stability of businessconditions, and the maintenance inactive operation of the productiveFor more information on the FederalReserve founding, see The FederalReserve Act: Its Origin and Principles,available on the Federal Reserve Bankof St. Louis website ooks/fra owen 1919.pdf).break under extreme economic pressures. Such a dynamic does notmean that market prices will never rise or fall quickly. Volatility mayreflect changes in economic conditions and would be a concern withrespect to financial stability only when institutions and markets are notadequately prepared. Financial stability depends on firms and criticalfinancial market structures having the financial strength and operationalskills to manage through volatility and continue to provide their essentialproducts and services to consumers, communities, and other businesses.Monitoring Risk acrossthe Financial SystemThe Federal Reserve and other bank regulators have long supervisedindividual banks and financial institutions to make sure they are run ina “prudent” and “safe and sound” manner and are not taking excessive risks. The goal of this traditional “microprudential” supervisoryThe Federal Reserve System Purposes & Functions57

Box 4.2. Responding to Financial System Emergencies: The Lender of Last Resort Concept inCentral BankingThe idea that a central bank should provide liquidity to support the financial system was refined by nineteenth-century economist Walter Bagehot, who suggested that during times of financial panic or crisis, a central bank should lend quickly andfreely, at a penalty rate of interest, to any borrower with good collateral.When a m

Nonprofit Self-Assessment Checklist
May 02, 2018 · D. Program Evaluation ͟The organization has provided a description of the framework for how each program will be evaluated. The framework should include all the elements below: ͟The evaluation methods are cost-effective for the organization ͟Quantitative and qualitative data is being collected (at Basics tier, data collection must have begun)
1m ago
222 Views

GGD-00-67R Responses to Questions Concerning Long-Term .
a Federal Reserve conference. Mr. Mullins joined the Federal Reserve Board of Governors in May 1990 and became a Vice Chairman in July 1991. Among other things, he was involved in decisions regarding monetary policy, banking policy, and financial markets. He left the Federal Reserve in February 1994 and joined LTCM. According to Federal Reserve .
5m ago
4 Views

Reserve Component Personnel Issues: Questions and Answers
How many people are in each of the different categories of the reserve . Ready Reserve will usually be called to active duty before members of the Standby Reserve3 or the Retired Reserve. The Ready Reserve comprises the Selected Reserve, the Individual Ready
5m ago
12 Views
Popular Tags
Recent Views