Drug Stability And Factors That Affect On The Drug . 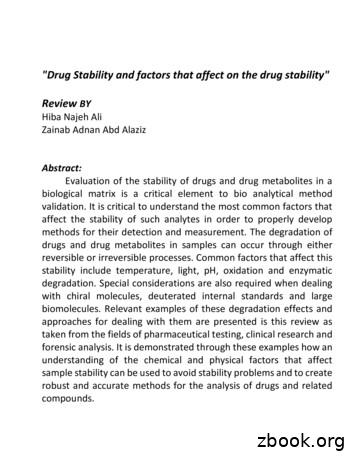 "Drug Stability and factors that affect on the drug stability"Review BYHiba Najeh AliZainab Adnan Abd AlazizAbstract:Evaluation of the stability of drugs and drug metabolites in abiological matrix is a critical element to bio analytical methodvalidation. It is critical to understand the most common factors thataffect the stability of such analytes in order to properly developmethods for their detection and measurement. The degradation ofdrugs and drug metabolites in samples can occur through eitherreversible or irreversible processes. Common factors that affect thisstability include temperature, light, pH, oxidation and enzymaticdegradation. Special considerations are also required when dealingwith chiral molecules, deuterated internal standards and largebiomolecules. Relevant examples of these degradation effects andapproaches for dealing with them are presented is this review astaken from the fields of pharmaceutical testing, clinical research andforensic analysis. It is demonstrated through these examples how anunderstanding of the chemical and physical factors that affectsample stability can be used to avoid stability problems and to createrobust and accurate methods for the analysis of drugs and relatedcompounds.

INTRODUCTION:Drug stability means the ability of the pharmaceutical dosage formto maintain the physical, chemical, therapeutic and microbialproperties during the time of storage and usage by the patient. It ismeasured by the rate of changes that take place in thepharmaceutical dosage forms. The purpose of stability testing is toprovide evidence on how the quality of a drug substance or drugproduct varies with time under the influence of a variety ofenvironmental factors, such as temperature, humidity, and light, andto establish a retest period for the drug substance or a shelf life forthe drug product and recommended storage conditions. Althoughthe pharmaceutical scientist plays a critical role in determining thestability of pharmaceuticals, practicing pharmacists should be able tointerpret this information for their patients. This chapter introducesthe rates and mechanisms of reactions with particular emphasis ondecomposition and stabilization of drug products. It is essential forpharmacists and pharmaceutical scientists to study, understand, andinterpret conditions of instability of pharmaceutical products as wellas to be able to offer solutions for the stabilization of these products.Factors affecting drug stability:There are many factors that affecting such as temperature sohigh temperature accelerate oxidation, reduction and hydrolysisreaction which lead to drug degradation and the pH in which theacidic and alkaline pH influence the rate of decomposition of mostdrugs. and many drugs are stable between pH 4 and 8.

The Weekly acidic and basic drugs shows good solubility when theyare ionized and they also decompose faster when they are ionized.So if the pH of a drug solution has to be adjusted to improve solubilityand the resultant pH leads to instability then a way out of this trickyproblem is to introduce a water-miscible solvent into the product. Itwill increase stability by: suppressing ionization reducing the extremepH required to achieve solubility enhancing solubility - reducing thewater activity by reducing the polarity of the solvent. For example,20% propylene glycol is placed in chlordiazepoxide injection for thispurpose.The Reactions catalyzed by pH are monitored by measuringdegradation rates against pH, keeping temperature, ionic strengthand solvent concentration constant. Some buffers such as acetate,citrate, lactate, phosphate and ascorbate buffers are utilized toprevent drastic change in pH. Sometimes pH can have a very seriouseffect on decomposition. As little as 1 pH unit change in pH can causea change of ten fold in rate constant. So when we are formulating adrug into a solution we should carefully prepare a pH decompositionprofile and then formulate the solution at a pH which is acceptablephysiologically and stability-wise also.The third one is moisture inwhich the water catalysis chemical reactions as oxidation, hydrolysisand reduction reaction and the water promotes microbial growth aswell as Light affects drug stability through its energy or thermal effectwhich lead to oxidation and Pharmaceutical dosage forms: soliddosage forms are more stable than liquid dosage forms for presenceof water while the concentration: rate of drug degradation isconstant for the solutions of the same drug with differentconcentration. So, ratio of degraded part to total amount of drug indiluted solution is bigger than of concentrated solution. Stock

solutions: are concentrated solutions which diluted by using (i.e.syrup 85%) at high concentration the stability is high and the drugincompatibility: reactions between components of pharmaceuticaldosage forms itself or between these components and cover of thecontainer while the Oxygen: exposure of drug formulations to oxygenaffects their stability. Three stabilities of drug must be considered:Frist of all is Physical stability. Secondly is chemical stability andmicrobiological stability Physical stability. Physical instabilitiespossibilities are: Crystal formation in pharmaceutical preparationsCauses: a. Polymorphism phenomena: i.e. Chloramphenicol (changeof amorphous to crystalline form. b. Saturated solution: by differenttemperature precipitation of solute may occur. C. In suspension:when very fine powder is used a part of suspending agent willdissolve then precipitate as crystal. Loss of volatile substances frompharmaceutical dosage forms: Examples: a. Aromatic waters b.Elixirs c. Spirits d. Some types of tablets which contain aromaticwater (Nitroglycerin tablets) and Loss of water: This can be seen inthe following dosage forms: a. saturated solution: by loss of waterthey become supersaturated and precipitate as crystals is formedb.Emulsions: Loss of water lead to separation of the two phases andchange to other type c. Creams: especially oil/water, they becomedry by loss of water d. Pastes e. Ointments: especially aqueous baseointments Humectants is added to the previous dosage forms whichdefined as hydrophilic substances added to aqueous phase to absorbwater from atmosphere and prevent its loss from the dosage forms.Examples: Glycerin and Absorption of water: This phenomena canbe seen in the following pharmaceutical forms: a. Liquefaction and

degradation may occur as a result of absorption of water b.Suppositories which base made from hydrophilic substances asGlycerin, Gelatin, and poly ethylene glycol. The consistency of theseforms becomes jelly-like appearance and change in crystalline form:Example: Cocoa butter which is capable of existing in fourpolymorphic forms.Chemical stabilitySolid state reactions are generally slow and it is customary to usestress conditions in investigation of stability and data obtained understress is then extrapolated to make prediction of stability. Hightemperature can drive moisture out of a sample and render thematerial apparently stable otherwise prone to hydrolysis. i.e. above65% relative humidity the beta form ofchlortetracyclinehydrochloride transforms into alpha form.

Microbiological stability:Contamination from microorganisms is a big problem for allformulations containing moisture but it can be a bother in soliddosage forms also if some natural polymers are used because manyNatural polymers are fertile sources of microorganisms. In the typeof hygienic manufacture carried out today where Quality Assuranceis a prerequisite as per the GMP procedures, there are definiteprocedures to prevent microbial contamination in all formulations.Sources of Microbial Contamination: Water, Air, Raw materials,containers and closures, Personnel and Instruments and apparatus.

Effect of lightMany drugs fade or darken on exposure to light and this leads toan aesthetic problem. Real photochemical reactions, photochemicalcatalytic reactions and Photochemical sensibilized reactionsEffect of packagingMaterial, Glass, Plastics, Metal, Rubber Glass Glass is resistantto chemical and physical change and is the most commonly usedmaterial. is resistant to chemical and physical change and is the mostcommonly used material.PlasticsThe problems with plastic are: 1. Migration of the drug through theplastic into the environment. 2. Transfer of environmental moisture,oxygen, and other elements into the pharmaceutical product. 3.Leaching of container ingredients into the drug. 4. Adsorption of theactive drug or excipients by the plastic.MetalsVarious alloys and aluminum tubes may be utilized as containersfor emulsions, ointments, creams and pastes. Limitation: They maycause corrosion and precipitation in the drug product. Overcome:Coating the tubes with polymers may reduce these tendencies.RubberRubber also has the problems of extraction of drug ingredientsand leaching of container ingredients. The pretreatment of rubbervial stoppers and closures with water and steam reduces potentialleaching.

The instability possibilities in different formulationsOral solutions Instability problems. Loss of flavor, Change in taste,Presence of off flavors due to interaction with plastic bottle, Loss ofdye, Precipitation, Discoloration Effects. Change in smell or feel ortaste Steps to prevent instability: Use of proper excipients andsuitable packing materials. Parenteral solutions physical instabilityoccurs due to: Interact contents with the container, Changes inChemical composition. Instability problems, Discoloration due tophoto chemical reaction or oxidation. Ex: thiamine hydrochloridePresence of precipitate due to interaction with container or stopper.Presence of “whiskers”. If some small pinholes are present in theampule due to improper sealing the solution wicks out, the liquidevaporates and the solid settles on the outside. It further helps inwicking out more solution and long lines of crystals form on theoutside of the vial which are called whiskers. This may happen duetoo small hole ( 0.5 µm) going undetected or the crack developingduring storage. Clouds: A cloud will appear in the product due to:Chemical changes an ester eg.a polysorbate may hydrolyseproducing an acid which is poorly soluble) b.Solubility product maybe exceeded. c.The original preparation of a supersaturated solutionor the use of a metastable form (ex: calcium gluceptate). Effects:Change in appearance and in bioavailability. Steps to preventinstability: 1.Use of antioxidants (0.5%) Acetylcystane or 0.02 – 1%Ascorbic acid) or Chelating agents (0.01 – 0.075 sodium edetate) toprevent discoloration. 2. Change in stopper or material of thecontainer will eliminate the problem.3.Checking of the

to maintain the physical, chemical, therapeutic and microbial properties during the time of storage and usage by the patient. It is measured by the rate of changes that take place in the pharmaceutical dosage forms. The purpose of stability

FORMULARY (LIST OF COVERED DRUGS)
member requests a refill of the drug, at which time the member will receive a 60-day supply of the drug. If the Food and Drug Administration deems a drug on our formulary to be unsafe or the drug’s manufacturer removes the drug from the market, we will immediately remove the drug from our formulary and provide notice to members who take the drug.
6m ago
41 Views

(List of Covered Drugs) - BCBSIL
If the Food and Drug Administration deems a drug on our formulary to be unsafe or the drug’s manufacturer removes the drug from the market, we will immediately remove the drug from our formulary and provide notice to members who take the drug. Other changes. We may make other changes that affect members currently taking a drug. For
5m ago
17 Views

Food-Drug Interactions
(drug-drug interaction), food, beverages, dietary supplements the person is consuming (drug-nutrient/food interaction) or another disease the person has (drug-disease interaction). A drug interaction is a situation in which a substance affects the activity of a drug, i.e.
4m ago
10 Views

Drug Prevention 4Teens - Exploring
effective drug prevention and enforcement programs during the past decade. Teen drug use decreases when young people perceive that drug use is risky, and good drug prevention programs help teens understand how and why drugs are harmful. Most kids don’t take drugs. According to a recent government survey drug use rates have decreased since 2001.
6m ago
18 Views

Quality of drug stores: Storage practices & Regulatory .
for pharmacy and wholesale, (ii) Proper facilities for drug storage for preserving drug quality and (iii) Drug Sales must be supervised by a registered pharmacist under Pharmacy Act 1967. Furthermore at every drug store the original valid drug sales li-cense should be displayed prominently in the store.
6m ago
19 Views

PREVENTION WITH PURPOSE - Campus Drug Prevention
(1) ease of drug availability, (2) lack of parental infuence, (3) normalization of drug use among peers, and (4) low perceived risk of harm from drug use. 3. However, for college students who engage in drug use, the personal and academic costs can be high, even more for drug use than for alcohol use, leading to gaps in enrollment, prolonged
6m ago
28 Views