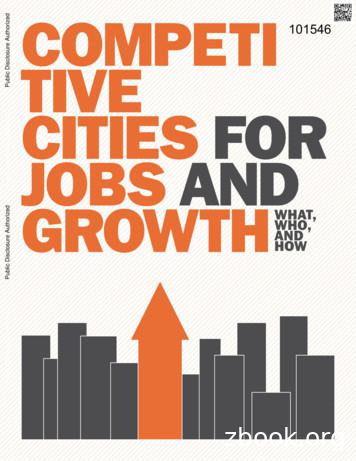 2015 The World Bank Group1818 H Street NWWashington, DC 20433Telephone: 202-473-1000Internet: www.worldbank.orgAll rights reserved.This volume is a product of the staff of the World Bank Group. The World Bank Group refersto the member institutions of the World Bank Group: The World Bank (International Bank forReconstruction and Development); International Finance Corporation (IFC); and Multilateral Investment Guarantee Agency (MIGA), which are separate and distinct legal entities eachorganized under its respective Articles of Agreement. We encourage use for educational andnon-commercial purposes.The findings, interpretations, and conclusions expressed in this volume do not necessarily reflectthe views of the Directors or Executive Directors of the respective institutions of the World BankGroup or the governments they represent. The World Bank Group does not guarantee the accuracy of the data included in this work.Rights and PermissionsThe material in this publication is copyrighted. Copying and/or transmitting portions or all ofthis work without permission may be a violation of applicable law. The World Bank encouragesdissemination of its work and will normally grant permission to reproduce portions of the workpromptly.For permission to photocopy or reprint any part of this work, please send a request with complete information to the Copyright Clearance Center Inc., 222 Rosewood Drive, Danvers, MA01923, USA; telephone: 978-750-8400; fax: 978-750-4470; Internet: www.copyright.com.All other queries on rights and licenses, including subsidiary rights, should be addressed to theOffice of the Publisher, The World Bank Group, 1818 H Street NW, Washington, DC 20433, USA;fax: 202-522-2422; e-mail: pubrights@worldbank.org.About the Competitive Industries and Innovation Program (CIIP)The CIIP partnership was created to enhance country growth and employment prospects bysupporting public policies and investments that promote competitiveness and innovation withinand across industries. The partnership’s resources are focused on supporting governments’ efforts to develop transformational economic development projects and to aggregate cutting-edgeknowledge that can be implemented as part of targeted pro-growth initiatives. As the Trusteeand Administrator for CIIP, the World Bank Group is responsible for program development,implementation, and monitoring and evaluation. For more information, visit www.theciip.org.6

Methodology,Approach andOutputsThe goal of this research has been to create a robust body of knowledge to address cities’ questions on benchmarking theirperformance, on analyzing what has worked and what has not, and on understanding how to organize for delivery indifferent contexts. The approach has used several methodologies to tackle these questions on the basis of best practice,data availability, replicability, and simplicity. In many cases, the research team leveraged new and existing data sources to shednew light on unanswered questions; in other cases, the team conducted primary research because available data were inadequate.The research involved looking at global and regional trends, comparing different typologies of cities—by income, sector, region,and industrial mix. The team buttressed these findings with econometric “deep dives” and case studies in selected countries andcities. Where possible, the study cites existing resources (research, analysis, toolkits, and experts) from the extensive literatureon each topic.Supplementing and informing this overview document are several companion papers that provide the foundations for the conclusions. These papers, available on the website at www.worldbank.org/competitivecities, are as follows:Companion Paper 1Companion Paper 3“City Analytics”This paper identifies common threads in city performance byassessing the state of cities today and identifying factors thatappear to be correlated with better economic outcomes. Thedocument also demonstrates how the database and analytictools can be used in other contexts such as in regional econometric deep dives. Prepared by Kenan Fikri and Juni TingtingZhu with substantial inputs from Anca Bogdana Rusu andguidance from Megha Mukim.“Six Case Studies of Economically Successful Cities:What Have We Learned?”The case studies were prepared in collaboration with regionalteams, including the relevant program leaders. This papersynthesizes the findings of the six individual case studies—Bucaramanga, Colombia; Coimbatore, India; Kigali, Rwanda;Changsha, China; Gaziantep, Turkey; and Tangier, Morocco—analyzing the similarities and dissimilarities amongthem and identifying cross-cutting themes. The paper highlights the institutions and strategies that successful citieshave relied on to spur economic development, the conditionsin which such successes have occurred, and the lessons of thisexperience that might be applicable to decision makers inother cities. Prepared by a team led by Z. Joe Kulenovic withcontributions from Alexandra Cech, Drilon Gashi, Luke Jordan, Austin Kilroy, Megha Mukim, and Juni Tingting Zhu.Companion Paper 2“Deep-Dive Quantitative Studies,” combines twostudies: (a) “Empowering Cities: Good for Growth?Evidence from China” and (b) “Decentralization inEthiopia—Who Benefits?”Both studies use longitudinal firm-level data to provideeconometric and causal evidence of whether and how citiesdrive economic growth and job creation. (a) Prepared by JuniTingting Zhu and Megha Mukim, and (b) prepared by RitamChaurey and Megha Mukim.8

Executive SummaryImproving the competitiveness of cities is a pathway toeradicate poverty and increase shared prosperity. Millionsof additional jobs could be created every year if more citiesperformed at the level of the world’s most competitive cities.Acompetitive city is a city that successfully facilitates its firms and industries to create jobs,raise productivity, and increase the incomesof citizens over time. Worldwide, improving the competitiveness of cities is a pathway to eliminating extreme povertyand to promoting shared prosperity. Of the largest 750 citiesin the world, three-quarters have grown faster than theirnational economies since the early 2000s; but several millionadditional jobs could be created every year if more citiesperformed at the level of the world’s best. The primary sourceof job creation has been the growth of private sector firms,which have typically accounted for around 75 percent of jobcreation. Thus city leaders need to be familiar with the factorsthat help to attract, to retain, and to expand the privatesector. This document aims to analyze what makes a citycompetitive and how more cities can become competitive.What Do Competitive Cities LookLike?Cities vary on their economic performance, andcompetitive cities are a cut above the norm. Using datafrom 2005 to 2012, the report finds the following: Accelerated economic growth. The top 10 percent of citiesachieved 13.5 percent annual gross domestic product(GDP) per capita growth, compared with 4.7 percent inan average city; Outstanding job growth. The top 10 percent of citiesachieved 9.2 percent annual jobs growth, compared with1.9 percent in the remaining 90 percent. Increased incomes and productivity. The top 10 percent ofcities increased the average disposable income of theirhouseholds by 9.8 percent annually. Magnets for foreign direct investment (FDI). The top 5percent of cities obtained as much FDI as the bottom 95percent of cities combined.Although 72 percent of cities outperformed their nationaleconomies in GDP growth alone, only 18 percent of citieswere able to outperform their national economies on jobs,12growth, and productivity simultaneously. Thus it appearsthat usually trade-offs are made between these economicoutcomes and that city competitiveness carries risks as wellas opportunities.Competitive cities include more than just householdnames, capital cities, or global centers of commerce.They are often secondary cities, and they are experiencing rapid industrialization. According to this study’s data,competitive cities include Saltillo, Mexico; Meknes, Morocco;Coimbatore, India; Gaziantep, Turkey; Bucaramanga, Colombia; and Onitsha, Nigeria. The success of these competitivecities was not a foregone conclusion: many of them exhibitedsuccess amid adversity—for example, many of them are landlocked and in a lagging region of the country.What Did Competitive Cities Do toAchieve Success?Economic structureStructural transformation came first, efficiency gainsand productivity next. Cities do not always overhaultheir economies to become competitive. They simply becomebetter at what they do. At lower income levels, the cities aretypically market towns that face the challenge of transformation from a service center to a production

productivity and increase incomes of citizens. Improving the competitiveness of cities is a pathway to eradicate poverty and increase shared prosperity. While three quarters of cities grew faster than their national economies since the early 2000’s, there is still room for improvement: millions of additional jobs could be created every year if more cities performed at the level of the world .