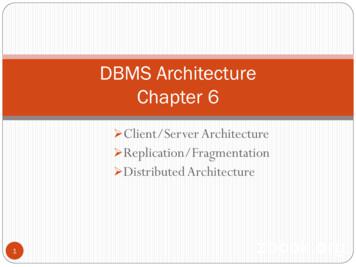 Standalone Systems The DBMS and the Application on a single micro processingMachine Serves only one user at a time Except the benefit of using the Database Principles it lacks: Data sharing Centralized data management Multi user feature Data administration is difficult The user has to stop working on the machine and the admin will takeover3

Client/Server DB Centralized DB – DB located at single site or location At least one server will store and process a database. Thisserver is called DB server It is responsible for the DB processing and shared accessfunctionsRequestsClientServerResponses4

Distributed Database Database development facilitates the integration ofdata available in an organization and enforces securityon data access. But it is not always the case that organizational data residein one site. This demand databases at different sites to beintegrated and synchronized with all the facilities ofdatabase approach. This leads to Distributed Database Systems11

Distributed Database Cont Transactions may access data at one or more sites There is a need for a controller Computer Systems may be located at each local branch office.Site 1Site 2Site 5CommunicationNetwork13Site 4Site 3

Advantage of Distributed DB (contd ) Increased Reliability and Availability When the data and the DBMS software are distributed Over severalsites ,one site may fail other sites continue to Operate. Only the dataand the software that exist at the failed site cannot be accessed. Thisimproves both reliability and availabilityImproved Performance Data Localization: A Distributed database management systemfragments the database by keeping the data closer to where it isneeded. Easier Expansion 17In a Distributed environment , expansion of the system in terms ofadding more data, increasing the database sizes or adding moreprocessors is much more easier.

Cont Concepts in DDBMS Replication: System maintains multiple copies of data,stored in different sites, for faster retrieval and faulttolerance. Fragmentation: Relation is partitioned into severalfragments stored in distinct sites Data transparency: Degree to which system user mayremain unaware of the details of how and where the dataitems are stored in a distributed system21

Homogeneous vs Heterogeneous DDB In a homogeneous distributed database All sites have identical software (DBMS) Are aware of each other and agree to cooperate inprocessing user requests. Each site surrenders part of its autonomy in termsof right to change schemas Appears to user as a single system Autonomous - Independent DBMSs23

Database Security A database should be properly secured using appropriatecontrols. Database security encompasses hardware, software,people and data Database security and integrity is about protecting thedatabase from being inconsistent and being disrupted.We can also call it database misuse. Database misuse could be Intentional or accidental,where accidental misuse is easier to cope with thanintentional misuse.33

Cont Most systems implement good Database Integrity to protectthe system from accidental misuse while there are manycomputer based measures to protect the system from intentionalmisuse, which is termed as Database Security measures. Database security is considered in relation to the followingsituations: Theft and fraud Loss of confidentiality (secrecy) Loss of privacy Loss of integrity Loss of availability35

Cont Levels of Security Measures Security measures can be implemented at several levelsand for different components of the system. These levelsare: Physical Level: concerned with securing the sitecontaining the computer system should be physicallysecured. The backup systems should also be physicallyprotected from access except for authorized users. Human Level: concerned with authorization ofdatabase users for access the content at different levelsand privileges.37

Cont Operating System: concerned with the weakness andstrength of the operating system security on data files. Weakness may serve as a means of unauthorized access to thedatabase. This also includes protection of data in primary and secondarymemory from unauthorized access. Database System: concerned with data access limitenforced by the database system. Access limit like password, isolated transaction and etc. Even though we can have different levels of security andauthorization on data objects and users, who access whichdata is a policy matter rather than technical.38

Cont Any database access request will have the following threemajor components Requested Operation: what kind of operation is requestedby a specific query? Requested Object: on which resource or data of thedatabase is the operation sought to be applied? Requesting User: who is the user requesting the operationon the specified object? The database should be able to check for all the threecomponents before processing any request. The checking is performed by the security subsystem ofthe DBMS.39

Cont Privilege Revocation: involves denying or cancelingpreviously granted privileges for users due to variousreasons. Account Deletion: involves in deleting an existingaccount of users or user groups. Is similar withdenying all privileges of users on the database43

Granting Privileges The owner account holder can pass privileges on any ofthe owned relations to other users by granting privilegesto their accounts. In SQL the following types of privileges can be grantedon each individual relation R: SELECT MODIFY (UPDATE, DELETE, INSERT) INSERT and UPDATE - certain attributes44

REVOKE & GRANT OPTION REVOKE To cancel privileges GRANT option If grant option is given then the account can also grant thatprivilege on the relation to other accounts. Suppose that B is given the GRANT OPTION by A and that B thengrants the privilege on R to a third account C, also with GRANTOPTION. In this way, privileges on R can propagate to other accountswithout the knowledge of the owner of R. If the owner account A now revokes the privilege granted to B, allthe privileges that B propagated based on that privilege shouldautomatically be revoked by the system.45

Working with the Geodatabase Using SQL
the underlying database management system (DBMS) and managed by the geodatabase and ArcSDE . As geodatabases are implemented in a relational DBMS using DBMS data types and table formats, the DBMS’s own Structured Query Language or SQL, a database language that supports data definition and data manipulation commands, may be
2m ago
5 Views

Database Fundamentals - ESP
A database management system (DBMS) is a collection of programs that enables users to create and maintain a database. According to the ANSI/SPARC DBMS Report (1977), a DBMS should be envisioned as a multi-layered system: Conceptual Schema Physical Database Internal Schema External View 1
8m ago
19 Views

DATABASE 1.1 DEFINITION A database DBMS
DBMS. Database management systems are often classified according to the database model that they support; the most popular database systems since the 1980s have all supported the relational model as represented by the SQL language. 1.2 Terminology and overview Formally, "database" refe
2m ago
10 Views

Chapter (2) Database Systems Concepts and Architecture
The correct schema is extremely important to DBMS. A rare chang e in a schema is referred to as the schema evolution. 10 DBMS Architecture and Data Independence In previous chapter, we discussed the main characteristics of th e database approach; 1) insulation of
6m ago
14 Views
Popular Tags
Recent Views