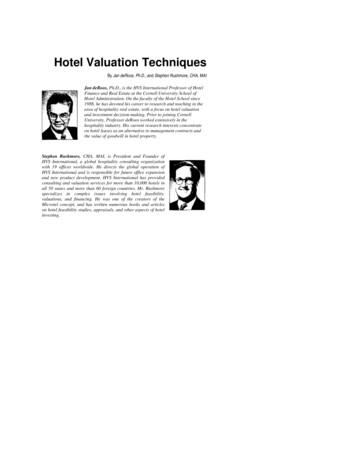 Hotel Valuation TechniquesBy Jan deRoos, Ph.D., and Stephen Rushmore, CHA, MAIJan deRoos, Ph.D., is the HVS International Professor of HotelFinance and Real Estate at the Cornell University School ofHotel Administration. On the faculty of the Hotel School since1988, he has devoted his career to research and teaching in thearea of hospitality real estate, with a focus on hotel valuationand investment decision-making. Prior to joining CornellUniversity, Professor deRoos worked extensively in thehospitality industry. His current research interests concentrateon hotel leases as an alternative to management contracts andthe value of goodwill in hotel property.Stephen Rushmore, CHA, MAI, is President and Founder ofHVS International, a global hospitality consulting organizationwith 19 offices worldwide. He directs the global operation ofHVS International and is responsible for future office expansionand new product development. HVS International has providedconsulting and valuation services for more than 10,000 hotels inall 50 states and more than 60 foreign countries. Mr. Rushmorespecializes in complex issues involving hotel feasibility,valuations, and financing. He was one of the creators of theMicrotel concept, and has written numerous books and articleson hotel feasibility studies, appraisals, and other aspects of hotelinvesting.

We focus our discussion in this chapter on three valuation techniques and three income approaches to estimate a hotel's value.Within the income approaches we present two variants of the traditional mortgage-equity model that estimates the market value ofindividual hotels: (1) an after-tax model that estimates investment value, and (2) an income capitalization technique used to valuehotels owned by publicly traded lodging companies. In addition, two alternatives for the sales comparison approach and the costapproach will be considered. Finally, we explore separately the valuing of the real property component of a hotel asset. We concludewith a discussion of all of the techniques. Each method is illustrated by a unified case study that allows for meaningful comparison ofthe techniques.Case Study Example and Valuation TechniquesThe Major City Edgemore Hotel is a 250-room upscale property in an urban market catering to the needs of business travelers andmoderate-size groups. The property is part of the large national franchise network of Edgemore Hotels. The Edgemore wasconstructed in 1995 in a growing area of Major City, located in the southern half of the United States. The property has a restaurantand deli with 180 seats, and a club and lobby bar with 90 combined seats. Meeting space totals 15,000 square feet and includes agrand ballroom, two executive boardrooms, several breakout rooms, and a business center. Recreational facilities include an indoor/outdoor pool with whirlpool and an adjoining fitness center with locker facilities. The property was constructed using superiormaterials and workmanship and has been maintained in average to above-average condition. The property was recently renovated andshows no signs of distress or deferred maintenance.We assume the current date to be January 1, 2004. The Edgemore has traditionally been an above-average competitor, achievingaverage daily rates virtually in the middle of its competitive set and above-average occupancy. The property consistently achieves 105percent RevPAR penetration. The Edgemore achieved solid occupancy and average daily rates during the 1996-2000 period, butsuffered after the events of September 11,2001. In addition, one new hotel and a conversion from a mid-price to upscale hotel openedin 2002, increasing the number of rooms in the upscale sub-market by 20 percent. These factors combined to produce a significantdrop in market occupancy as the new properties gained their fair share of the upscale market. The occupancy situation is expected toimprove rapidly, with no new supply in the pipeline and with demand expected to grow quickly over the next three years.Pro-Forma Financial ProjectionsExhibit 1 presents a historical statement of the Edgemont Hotel's income and expense for 2003, as well as projections for 2004through 2008. The current date is assumed to be January 1,2004. The projections account for an increase in the room demand andchanges in the relative competitive position of the Edgemore. The operating expenses for the property include all charges normallyassociated with the operation of the property, including franchise and royalty fees, a management

fee, and a capital expenditure (CapEx) reserve. Thus, the net income figure represents the cash available to service debt, provide anequity dividend, and pay income taxes.The projection shows a rapid decline in occupancy as new supply comes into the market, with average daily rate increasing withinflation over the projection period. This combination produces a net income that increases rapidly and then peaks in 2007. The year2003 obtains a net income of 2.38 million, while the third projection year of 2007 obtains a net income of 4.64 million, an increaseof 94.6 percent over the three years. Both projection years are inappropriate for use as an estimate of stabilized net income, with the2004 figure being too small and the 2007 figure too large. It is thought that long-term stabilized occupancy will average 71 percent.Hence, a stabilized net income of 4.107 million is used.7Basis of Projections. Room rates are projected to increase by 3 percent for all years. All other revenues and expenses are projected toincrease by 3 percent per year. Other assumptions used in the valuation techniques are:Debt ParametersLoan-to-Value Ratio8AmortizationMortgage InterestYearly Mortgage Constant9Percent of Loan Paid in 10 Years960%25 years8.75%0.09865717.7403%Equity ParametersBefore Tax Equity Dividend RateBefore Tax Equity YieldAfter-Tax Equity Yield13.0%18.0%14.0%Tax Considerations/or Investment Value Estimates Ordinary Income Tax RateCapital Gains Income Tax Rate35%17.5%Depreciation Parameters (straight line assumed)Building Tax LifeBuilding BasisFF&E Tax LifeFF&E BasisLand Basis39 years70% of value and 30% of CapEx reserve7 years10% of value and 70% of CapEx reserve20% of value (land is not depreciated)Public Company InformationCost of DebtDebt to Total Value RatioPublic Company Equity ParametersRisk Free RateEquity Market PremiumC-Corp. BetaPublic Company Tax RateOther Valuation ParametersTerminal Capitalization RateSelling Expenses (Broker & Legal)8.0%60% (Giving a 40% Equity to Value Ratio)5.0%8.0%0.8035%11.25%3.0% of selling priceValuation Technique 1: Band of Investment Using One Stabilized YearInstead of projecting net income over an extended period of time, a single, stabilized estimate of net income can be capitalized at anappropriate rate. The stabilized net income estimate is intended to reflect a representative year for the subject property in terms ofoccupancy, average rate, and net income. As just mentioned, the stabilized net income for the Edgemore Hotel is estimated to be 4,107,000.The next step in evaluating the Edgemore using the "band of investment using one stabilized year" technique is to develop a rateto capitalize the stabilized net income into an estimate of value. The band of investment, also known as the "weighted average cost ofcapital," or WACC, is based on the premise that most hotel investors purchase their properties 'using a combination of debt and equitycapital. Both of these capital sources are seeking a specific rate of return on their invested capital as well as the return of their investedcapital. The appropriate rate for the debt component is called the mortgage constant, which combines the return on capital (interestrate) with the return of capital (sinking fund factor) into a single rate. The proper rate of return for the equity component is the equitydividend rate. The appropriate overall capitalization rate is therefore the weighted average cost of capital from these two sources. Thecalculations that follow show how the band of investment using one stabilized year technique is used to estimate the value of theEdgemore Hotel:Mortgage Finance Terms:Mortgage Interest Rate:Mortgage Amortization:Mortgage Constant: Loan-to-ValueRatio:8.75%25 years0.098657 60%Equity Dividend Rate (Before Tax)13%Weighted Average Cost of Capital Calculation:

MortgageEquityPercent Of ValueRate of Return60%x0.09865740%x0.130000Overall Capitalization Rate Weighted Average0.0591940.0520000.111194The stabilized net income is divided by the capitalization rate to calculate the capitalized value: 4,107,000 - 0.111194 36,935,333, say 36,935,000 The value can be supported with the following calculations:60% Mortgage40% EquityTotal 22,161,000 14,774,000 36,395,000xx0.098657 2,186,0000.130000 1,921,000 4,107,000These calculations show that the 36,395,000 value can be divided into a mortgage portion of 22,161,000 and an equity portionof 14,774,000. The yearly mortgage payment, consisting of interest and amortization, is calculated by multiplying the originalmortgage balance ( 22,161,000) by the mortgage constant (0.098657), which results in an annual debt service of 2,186,000. Theequity dividend is established by multiplying the equity investment ( 14,774,000) by the anticipated equity return (.130), which yields 1,921,000. The annual debt service plus the equity dividend equals the stabilized net income of 4,107,000.Essentially, the band-of-investment technique works backward, using the projected stabilized net income to calculate the valuethat will meet the demands of both the debt and equity investors.Valuation Technique 2: Room-Rate MultiplierThe lodging industry has a well-known rule of thumb known as the average daily rate (ADR) rule, which states that a property isworth 1,000 times its average daily rate on a per-room basis. The rule is essentially a RevPAR multiplier, setting value per room at 3.5to 4.5 times annual room revenues, depending on occupancy.10 More formally:Value Average Daily Rate x Number of Rooms x 1,000One of the questions that immediately arises when implementing the rule is which ADR to use: a "trailing" or historical ADR,ADR in the first projection year, or the stabilized year ADR. Since the rule's origins are clouded in lodging folklore, a generallyaccepted standard must be used when applying the rule. Extensive research by Corgel and deRoos revealed that practitioners generallyuse the current year's expected ADR when applying the rule to existing hotels, but apply a stabilized ADR when applying the rule toproperties under development." This inconsistency is a source of confusion and inaccuracy. For our purposes, we take the position thatthe rule should be consistently applied to a stabilized ADR.The stabilized ADR in 2006 (year 3) for the Edgemore Hotel is 182.09, or 171.64 expressed in 2004 dollars.12 Applying theroom-rate formula results in the following value: 171.64 x 250 x 1000 42,910,000For the Edgemore, the room-rate multiplier technique produces an estimate of value significantly in excess of all of the othertechniques, indicating that this technique is subject to error.Valuation Technique 3: The Coke -Can MultiplierAnother valuation rule-of-thumb used in the lodging industry is that each room of a hotel is worth 100,000 times the price of a Coke in the on-floor vending machine or in-room mini-bar. More formally:Value Coke price x Number of Rooms x 100,000The Edgemore Hotel sells cans of soda for 1.50 in the room mini-bars. Thus, the value of the Edgemore by this "precise"valuation method is: 1.50 x 300 x 100,000 37,500,000We urge market participants to use this technique judiciously, as some properties seriously "misprice" soda in relation to propertyvalue.Income Approaches to ValueValuation Technique 4:10-Year Discounted Cash Flow Using Mortgage and Equity Rates of ReturnValuation technique 4 is appropriate in dynamic hotel markets where supply and demand is constantly changing and the subjectproperty's occupancy, rate, and net income has not stabilized. The projection of income and expenses reflect changing marketconditions and extends over a five- to ten-year time frame. Traditionally, hotel investors use a ten-year projection period.To convert the projected income stream into an estimate of value, the anticipated net income is allocated to the mortgage andequity components based on market rates of return and loan-to-value ratios (similar to the band-of-investment). The total of themortgage component and the equity component equals the value of the property. The process is described as follows:1. The terms of typical hotel financing are set forth, including interest rate, amortization term, and loan-to-value ratio.2. An equity yield rate

Hotel Valuation Techniques By Jan deRoos, Ph.D., and Stephen Rushmore, CHA, MAI Jan deRoos, Ph.D., is the HVS International Professor of Hotel Finance and Real Estate at the Cornell University School of Hotel Administration. On the faculty of the Hotel School since 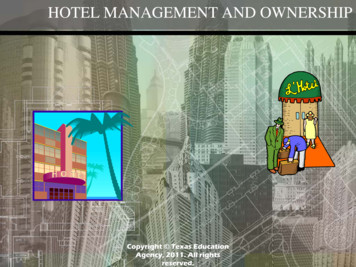 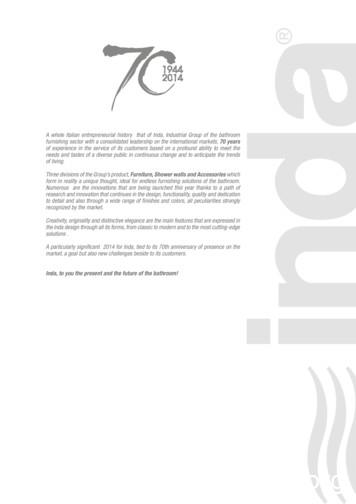 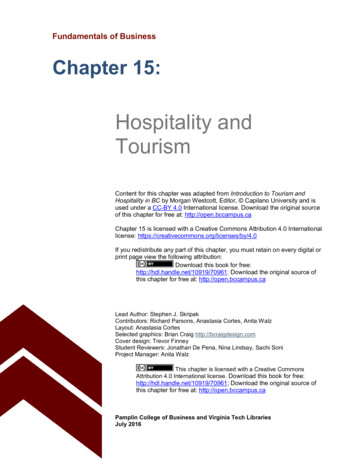 Hospitality and Tourism
A hotel’s size is based on the number of guest rooms it has; hotel sizes can range from a small boutique hotel with fewer than 50 rooms to a large resort hotel with more than 1,000 rooms. The location of a hotel can also determine the type of guest served. An airport hotel may be very different from a bed and breakfast or a conference hotel.
2m ago
9 Views 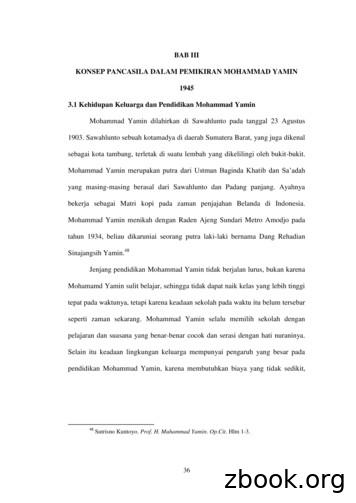 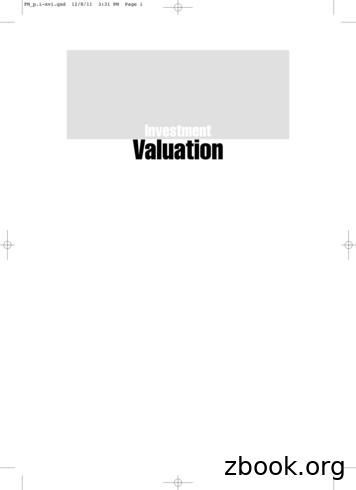 Investment Valuation
Founded in 1807, John Wiley & Sons is the oldest independent publishing company in the ... valuation and ﬁnancial instrument analysis, as well as much more. ... Introduction to Valuation 1 A Philosophical Basis for Valuation 1 Generalities about Valuation 2
1m ago
3 Views 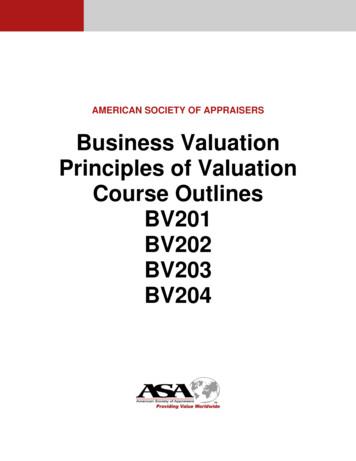 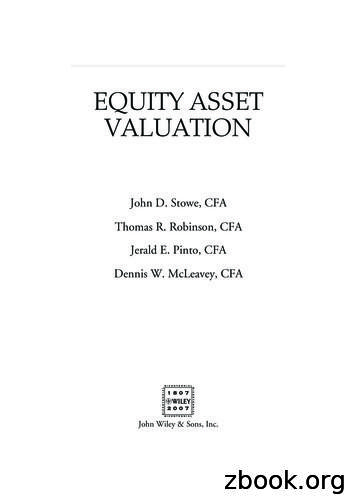 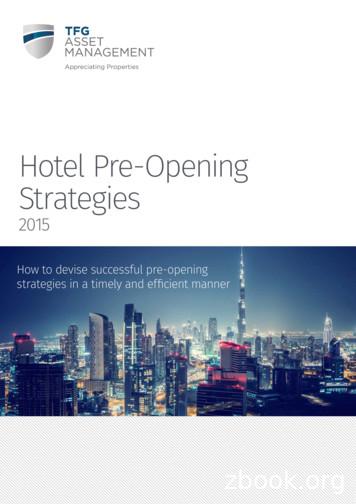 Hotel Pre-Opening Strategies - Hospitality Net
Under the Hotel Management Contract (HMC), conflicts between a hotel owner and hotel operator can be grouped into three main categories: • Level of control and influence: There is an ongoing debate over to what extent a hotel owner should take control before and after a hotel opening. Historically, HMCs have heavily favoured management companies.
1m ago
11 Views 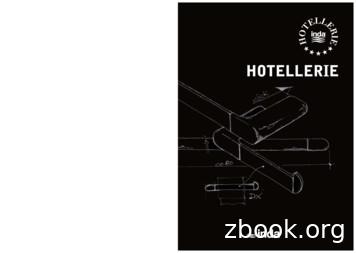 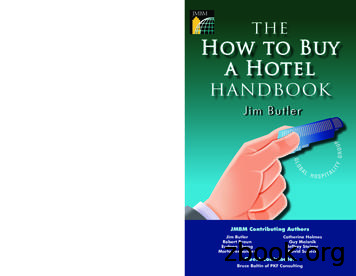 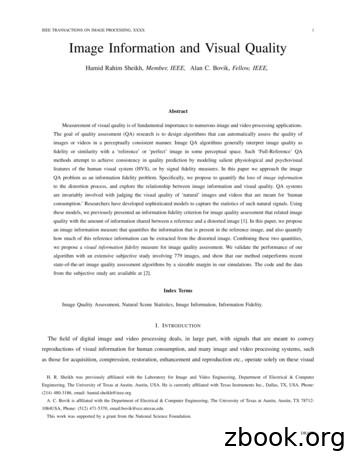