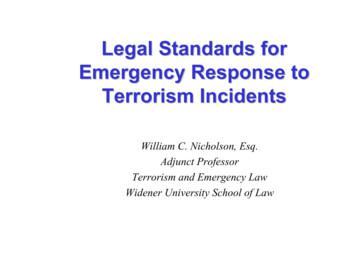 Terrorist Intent “If it is true that I haveacquired [chemical ornuclear] weapons, Ithank God who hasmade it possible. And if Iseek to procure suchweapons, it is a duty.”Osama Bin Laden

Homeland Security PresidentialDirective 5: Deadlines Beginning in Federal Fiscal Year 2005,NIMS will be a REQUIREMENT for anyFederal funding through– Grants– Contracts– Other activities Secretary of DHS to develop standards,guidelines for NIMS adoption

Institutionen för systemteknik - DiVA portal
The standard, as well as the partnership, is called AUTOSAR, which stands for Automotive Open System Architecture. The partnership was founded in 2002, initially by BMW, Bosch, Continental, DamienChrysler, and Volkswagen, with Siemens joining the partnership shortly thereafter. [6]
6m ago
119 Views