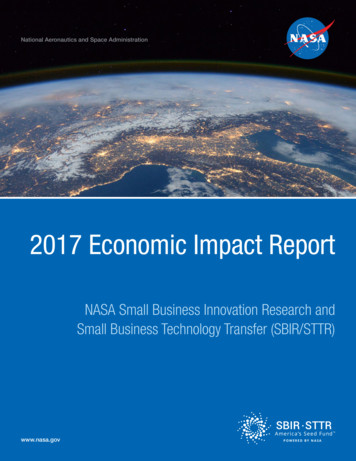 2017 NASA SBIR/STTR ECONOMIC IMPACT REPORTPROGRAM OVERVIEWNASA considers technological innovation to be vital to the agency’s mission and to the nation’s prosperityand security. The SBIR and STTR programs are integral in achieving technological innovations. NASA awardsSBIR and STTR contracts in three phases. This report is based on Phase I and Phase II awards madein FY2016. CCRPP is not included because it was not available in FY2016. Phase III is not includedbecause it is funded from sources other than the SBIR/STTR program.Figure 1: SBIR and STTR Program Phases*PHASEIProvides the opportunity toestablish the scientific,technical and commercialmerit and feasibility of theproposed innovation infulfillment of NASA needs.Awards of up to 125,000.Period of performance forSBIR is 6 months. STTRcontracts last up to 12months.PHASEIIFocuses on the development, demonstration, and delivery ofthe proposed innovation. Includes only firms that havesuccessfully completed Phase I.Awards of up to 750,000.Period of performance is 24 months.Phase II-E encourages the advancement of innovations andawards up to 375,000 under a matching fund arrangementfor a minimum of a 4-month extension.Civilian Commercialization Readiness Pilot Program(CCRPP) supports technology maturation that require morefunds or time, awards up to 2M under a matching fundagreement for an extended period of roughly 24 months.PHASEIIIMoving innovativetechnologies, resultingfrom either a Phase I orPhase II contract, towardscommercialization.Funded from sourcesother than SBIR/STTRprogram and maybe awarded with nofurther competition.*The primary difference between the STTR program and the SBIR program is that for STTR, small businesses must partner with a non-profitorganization or a university.7

2017 NASA SBIR/STTR ECONOMIC IMPACT REPORTECONOMIC IMPACTAs established by Section 9 of the Small Business Act (15 U.S.C. 638), as amended by the SBIR/STTRReau thorization Act of 2011, the SBIR/STTR programs of all eligible agencies shall develop metrics to evaluatethe effectiveness, and the benefit to the people of the United States, of the SBIR program and the STTR programof the Federal agency that are science-based and statistically driven, reflect the mission of the Federal agency,and include factors relating to the economic impact of the programs.Recognizing the importance placed upon the effective evaluation of the programs’ benefit to the Americanpeople, this analysis is the first step in creating a science-based and statistically driven estimate of the economicimpact of NASA’s SBIR and STTR programs. Specifically, this analysis calculates the impacts of the programs’operations within the U.S. for FY2016. NASA SBIR and STTR awards have a broad national economic impactthat is not simply limited to the states that received funding. An analysis of the states receiving awards providesinsight into a portion of the economic impacts, but gives a limited view as the total national effects of theprogram cross state borders. This is because many firms purchase goods and services from suppliers in otherstates, including states where no SBIR or STTR awards are made. Therefore, the economic impacts of the NASASBIR and STTR programs are reported at the national level.The following pages provide details of the NASA SBIR and STTR program awards and the economic impact tothe nation. A description of the study’s methodology (input-output modeling), the IMPLAN model, and examplesof other uses of input-output modeling within the government can be found in the Appendix of this report.8

2017 NASA SBIR/STTR ECONOMIC IMPACT REPORTImpacted Industry SectorsA variety of industries are impacted by NASA’s SBIR and STTR programs. Table 5 displays the 10 most impactedindustries (based on employment). Not surprisingly, the greatest impact is to the scientific research anddevelopment services, reflecting the nature of NASA’s missions. As evident from the data, the SBIR and STTRprograms not only stimulate growth in research and development, but also spread across a variety of industriessuch as real estate, healthcare, legal, and many others.Table 5: Top 10 Impacted Industries Based on EmploymentEmploymentLabor Income(millions)Value Added(millions)Output(millions)Scientific research anddevelopment services658.2 72.1 98.4 188.4Real estate150.9 3.9 23.5 31.5Management consulting services101.4 8.6 8.4 13.3Employment services90.7 3.7 5.3 6.7Marketing research and all othermiscellaneous professional,scientific, and technical services78.8 4.2 3.9 6.1Legal services60.8 5.5 8.8 12Full-service restaurants59.6 1.4 1.6 2.9Limited-service restaurants49.4 1 2.4 4.1Hospitals44.1 3.5 3.9 6.8Architectural, engineering, andrelated services42.5 4 4 7.3Sector Description10

2017 NASA SBIR/STTR ECONOMIC IMPACT REPORTCONCLUSIONThe purpose of the SBIR and STTR programs, as established by law, is to stimulatetechnological innovation in the private sector; to strengthen the role of SBCs in meetingFederal research and development needs; to increase the commercial application ofthe research results of the programs; and to encourage participation of socially andeconomically disadvantaged persons and women-owned small businesses. It is animportant program that benefits all parties. Above all, it inspires continued technologicalinnovation for the good of our world and beyond.11

2017 NASA SBIR/STTR ECONOMIC IMPACT REPORTAPPENDIXMethodology and the IMPLAN ModelThe theoretical underpinnings of input-output (I-O) modeling are based on the notion ofinter-industry transactions: industries use the products of other industries to produce theirown products. This approach allows one to estimate the number of goods and servicesfrom other sectors (input) required to produce goods and services in the sector of analysis(output). The combined effect across all sectors can be summed to calculate a total economicimpact. This model is widely used by Government to estimate the regional economic impactsof changes in government expenditures, private enterprise, and individual consumptionchoices. I-O modeling enables decision-making processes within Government to more fullyunderstand the economic effects (in terms of jobs, output, earnings and taxes) and optimizepolicy response accordingly.This report utilizes NASA SBIR and STTR obligated funding data, as reported to the SmallBusiness Administration, in NASA’s FY2016 annual report as the basis of the analysis. 172.9 million in agency obligated funds were transformed into employment financialequivalents (jobs) using U.S. Economic Census data for NAICS 541712 [Research anddevelopment in the physical, engineering, and life sciences (except biotechnology)].This transformation ensures precise modeling because NAICS 541712 represents theparticipating firms’ economic activity and basic characteristics.11 - Firms in NAICS 541712 are limited in size to 500 employees and are engaged primarily in R&D activities relating to physical, engineering, and life sciences(except Biotechnology). Firms within more broad NAICS categories have differing size limits and may be primarily engaged in research areas not applicable toNASA’s SBIR and STTR programs.13

2017 NASA SBIR/STTR ECONOMIC IMPACT REPORTConverted employment financial equivalent figures were used as an input and modeled using MIG, Inc.’sIMPLAN software.2 The IMPLAN model is a robust, industry-standard I-O model that provides insight intoeconomic impacts at different levels of the economy: from the national level down to the ZIP code level.The IMPLAN model is based on the I-O data from the U.S. National Income and Product Accounts from theBureau of Economic Analysis. The model contains 536 industry sectors based on the NAICS. Its frameworkis considered static because the impacts calculated for any scenario by the model are estimates of theindirect and induced impacts for a one-year time period. For application to the NASA SBIR/STTR program,the IMPLAN model was calibrated at a national level and all economic activity was modeled under IMPLANsector 456. No additional changes were made to the IMPLAN model. All dollar values are displayed in 2016dollars.The IMPLAN model contains two components: the descriptive model and the predictive model. Thedescriptive model maps the economy within the region of analysis using a series of accounting tables thattrace flows of funds (dollars) between purchasers and producers in the defined region. The model alsocaptures the Region’s movement of exported and imported goods and services. The descriptive models alsoincludes IMPLAN’s Social Accounting Matrices, which define the flow of funds between institutions — suchas transfer payments from governments to businesses and households and taxes paid by households andbusinesses to governments.The predictive model contains a set of multipliers that can be used to analyze the changes in final demandand their subsequent ripple effects throughout the region of analysis. These ripple effects are often largerthan the initial effect as recipients of the initial payments spend a portion of the funds, and the recipientsof the new funds spend a portion of the funds as well, and so on and so forth. These effects are reportedin terms of value added to the economy (GDP), jobs, and tax revenue. All employment figures estimatedthrough the IMPLAN model include all full-time, part-time, and temporary positions.3 Similar I-O modelsinclude the Bureau of Economic Analysis’s (BEA) RIMS II model as well as various proprietary models suchas REMI, EMSI and REDYN. While each model has its own unique aspects, the theoretical underpinnings areshared and thus the modeling results are comparable.2 - IMPLAN was originally developed in 1979 by a joint effort between the U.S. Forest Service, the FEMA, and the U.S. DOI, Land Management with the goal of assisting in land and resourcemanagement planning. The model is used by additional government agencies to quantify various economic activities. For more details: Miller, Ronald E., and Peter D. Blair. Input-output Analysis:Foundations and Extensions. Englewood Cliffs, NJ: Prentice-Hall, 1985.3 - IMPLAN Pro User Guided. Blair. Input-output Analysis: Foundations and Extensions. Englewood Cliffs, NJ: Prentice-Hall, 1985.14

2017 NASA SBIR/STTR ECONOMIC IMPACT REPORTGovernment Uses of I-O ModelingSpecific to the federal level, agencies utilize I-O analysis in assessing the economic potential of scientificand social programs, military and other installations, budget adjustments, as well as infrastructure andother development projects. Select Examples of Federal Uses of I-O Modeling:Department of Defense (DOD): Uses various I-O models to assess the economic impacts of large scalebudgetary decisions, such as the effects of the 2012 sequestration.4 The DoD also calculates the effect ofsmaller regional budgetary decisions, such as the closure of Hill Air Force Base in the State of Utah.5Department of Transportation (DOT): Utilizes I-O analysis in conjunction with Benefits Cost Analysis tofurther inform their decision making process when deciding which projects to undertake.6 The agency alsoencourages state and local agencies to utilize similar methodologies when pursing local projects as well.Department of lnterior (DOI): Calculates the entire agency’s annual economic impact. In 2009, theiranalysis concluded that the agency supports over 1.4 million jobs for Americans and over 370 billion ineconomic activity.7Department of Agriculture (DOA): Calculated in 2010 that given an increase of 1 billion in expendituresthe SNAP, formerly the Food Stamp Program, is estimated to increase economic activity (GDP) by 1.8billion and generate approximately 13,500 jobs. This analysis further codified previous estimates from2002, which suggested a 1 billion increase in spending generated 1.8 billion in economic activity 8LimitationsThe economic and fiscal impacts calculated in this study are attributable to NASA’s SBIR and STIR awardfunding for FY2016, i.e. the directly measurable economic impacts associated with approximately 172.9million worth of aerospace research and development contracts awarded by NASA. This study does notattempt to estimate the additional positive indirect economic and fiscal impacts of technical innovationsdeveloped by the program, nor does this study attempt to estimate the additional economic and fiscalimpacts that can be attributed to SBIR and STTR award participants because of their participation in theprogram. These additional economic and fiscal impacts which occur at the firm level, such as future salesof newly developed innovations, the increase in future government contracts, increased outside investment,new product lines, and other business expansion, are difficult to fully capture but are thought to besignificant. NASA’s SBIR and STTR programs anticipate conducting future research in the form of casestudies and longitudinal firm performance studies in order to more fully capture and quantify these indirectlymeasurable economic effects.4 - Levine, Linda. N.p., 1 Oct. 2012. Web. 5 March oads/ 2012/10/R42763.pdf5 - Utah Defense Alliance. Jan E. Crispin-Little, Pamela S. Perlich. N.p . Web. 5 March 2017. pdf6 - US DOT. Office of Asset Management {HIAM).Economic Analysis Primer. N.p., n.d. Web5 March 2017. http://www.fhwa.dot.gov/infrastr

Rolling Bearing Life Prediction, Theory, and Application
Results are published in both non-NASA channels and by NASA in the NASA STI Report Series, which includes the following report types: . NASA/TP—2013-215305, March 2013, in its entirety. Figures 27 and 28 have been changed. . ANSI/ABMA and ISO standards load-life exponent of 10/3 to
5m ago
23 Views

On THE MOOn
and NASA’s moon missions by displaying space-related images. NASA has many excellent ones you can print out. (Visit . moon.msfc.nasa.gov.) To get the NASA images used in this guide, use the URL found below each image. Challenge Events Grades 3–5 Grades 6–8 Grades 9–12. Launch It Touchdown Roving on the Moon Heavy Lifting On Target Feel .
5m ago
13 Views

NASA and the Environment - NASA History Division NASA
Ozone depletion thus represents an important case study in the history of NASA and environmental sciences. It is one from which many lessons can be learned about the management of science and technology and
3m ago
20 Views