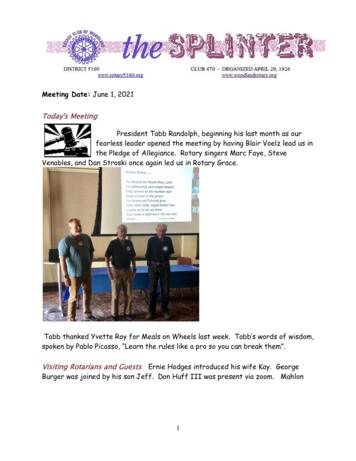 Meeting Date: June 1, 2021Today's MeetingPresident Tabb Randolph, beginning his last month as ourfearless leader opened the meeting by having Blair Voelz lead us inthe Pledge of Allegiance. Rotary singers Marc Faye, SteveVenables, and Dan Stroski once again led us in Rotary Grace.Tabb thanked Yvette Roy for Meals on Wheels last week. Tabb’s words of wisdom,spoken by Pablo Picasso, “Learn the rules like a pro so you can break them”.Visiting Rotarians and Guests Ernie Hodges introduced his wife Kay. GeorgeBurger was joined by his son Jeff. Don Huff III was present via zoom. Mahlon1

Whittle also joined via zoom.AnnouncementsTony Delevati announced that the Demotion would be Friday, June25, 2021 at the Hotel Woodland. Cocktails begin at 5:30, with dinner2

at 6:30Incoming president, Dan Stroski announced that Jayne Williams will be the YouthExchange Coordinator next year. She will also work with Gary Wegener on theInteract Club. Dan also asked that all Directors who want to stay on (if their term3

is not up they have to resign not to automatically be on) to let him know.Mark Ullrich said United Way is having a webinar on the joining to the WoodlandUnited Way with Sacramento and on the 10,000,000. Donation from McKenzieScott.Blair Voelz reported that the Kenya Project has planted 1,000 trees.AnniversariesGary Bunch has been married to Kathy for 43 years as of June 3rd.He termed her the “Most fortunate woman in the World”.Lisa Martinez celebrated 16 years with Larry Dunham on4

June 4th.BirthdaysWe had no birthdays this week.5

RecognitionDan Stroski had the task of extracting hard earned dollarsfrom us.First, Dan had all veterans stand and we gave them a round of applause.Next, Happy Time: Mark Ullrich was particularly happy George Burger talked himinto getting a smoker. After several attempts Mark got it right with some porkchops.Blair Voelz was happy to see the new Woodland High School scoreboard wepaid for on KCRA TV.Tony Delevati was happy to be back after missing a couple of meetings dueto too much work.Dan’s theme was Memorial Day. His first victim, Derrek Kaff: Arlingtonbecame the National Cemetary on June 4, 1864, whose house and plantation was it6

before? Derrek did not know, but Tim Pettit knew that it was Robert E. Lee’shome.Marie Galbo knew that the Tomb of the Unkown Soldier was establishedNovember 11, 1921.Yvette Roy knew half of how American Flags should be displayed on MemorialDay: Half mast until noon, and then full until sundown.Brian Dwyer did not know that freed slaves in Charleston, South Carolina onMay 1, 1865 held one of the final ceremonies to honor Civil War Dead.Jayne Williams knew that the Lincoln Memorial opened May 30, MemorialDay, 1922.George Burger did not know that the names of spouses are on the back oftombstones at Arlington.Roger Kohlmeier did not know that approximately 620,000 died in the CivilWar.Rags to RichesMarc Faye, with 477 on the line won a free lunch.Today’s ProgramOur own, Woodland Police Chief Derrek Kaff, was our speaker.Derrek discussed the status of crime in Woodland.7

Derrek began his presentation by stating why he is upbeat about the statusof law enforcement in Woodland. A member of the community commented that“Moral is back”. A Junior officer said that “I feel called for the job”. A newrecruit could have gone anywhere, but the only place he wants to work is Woodland.In 2020 there were 66,014 calls for service. This is the number forcommunities twice the size of Woodland. The first priority is violent crimes inprogress and injury accidents. Second priority includes in progress propertycrimes, W&I code sec. 5150 (mentally ill who are a danger to self or others)incidents in progress, and non injury accidents. Third priority includes crime sceneinvestigation when suspect not present, stolen vehicles, and alarm response. Last8

on the totem poll are noise complaints and parking violations.People in the community are most concerned with the homeless and traffic.Call volume appears to be on the increase. There were 6,251 calls for service inApril of 2021 as compared to 4,930 in 2020. Staffing is down, however. There are68 officers, down from a high of 71. Civilian staffin is down from a high of 26 in9

2008 to 16.Most arrests are primarily adult misdemeanor arrests. Yolo County is one ofthe few counties in the nation to actively divert juveniles out of the criminaljustice system. Juvenile arrests are down 90% from 10 years ago.10

Police are on Social Media. On social media a survey showed that the majorconcerns of the residents were homelessness and traffic.There is a homeless team in place. One member of the team received rosesfrom a homeless individual whose life she saved.11

The Explorer Program for kids still exists. Brian, pictured below, wants acollege degree and then wants to return to Woodland Police.Communication with the community is a priority. Derrek will present astrategic plan to the Chief’s Advisory Board for review and comment. Unidosprovides a connection to the community. The citizen’s police academy still exists.It provides an opportunity to learn what being a police officer is all about.Woodland PD has applied for a grant from ABLE, Active Bystanders for LawEnforcement. This is a program started by Georgetown to train people how tocommunicate their disagreement with police procedure.12

Upcoming Programs This week coming up, we will hear from Woody and RebeccaFridae - Woody is our current Rotary District 5160 Assistant District Governor.Woody and Rebecca have a keen interest in the Country of Romania, Woody'sfather's country of birth. Woody and Rebecca spent 5 weeks in Romania back inlate 2018 and have also spent a substantial amount of time studying the RomanianRevolution and have put together a presentation titled "Romania's Painful Birth ofFreedom".13

Jun 01, 2021 · paid for on KCRA TV. Tony Delevati was happy to be back after missing a couple of meetings due to too much work. Dan’s theme was Memorial Day. His first victim, Derrek Kaff: Arlington became the National Ce

Former Fort Devens Army Installation Restoration Advisory .
Feb 25, 2021 · Restoration Advisory Board (RAB) Meeting Minutes Page 1 of 12 RAB MEETING MINUTES Date/Time: Thursday, February 25, 2021/6:30 to 8 pm . Meeting slides and a recording of the meeting in MP4 format are available on the project website at: . construction will start in June 2021 and be complete in summer 2022.
1m ago
3 Views

Columbine Quilters
Ann Ballantyne 417-1679 Nancy Ballantyne 249-1346 meeting and continue working on the autograph blocks and paint chip Hope to see you at the August meeting! June 2021 Minutes The meeting of Columbine Quilters was held on June 5, 2021. Sally opened the meeting. Judy reported 12 members a
12d ago
0 Views