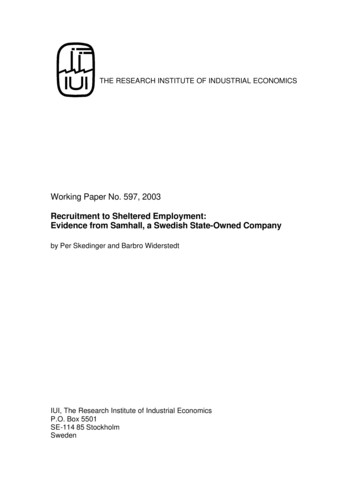 Recruitment to sheltered employment:Evidence from Samhall, a Swedish state-ownedcompany#Per Skedinger Research Institute of Industrial Economics (IUI)Barbro WiderstedtCentre for Values Education, Umeå UniversityJuly 29, 2003AbstractThis paper analyses recruitment practices to Samhall, a state-owned companythat provides sheltered employment for individuals with severe work disabilities. Besides providing employment for disabled workers and rehabilitatingthem to employment outside Samhall, the company is expected to decrease itsdependence on Government subsidies. This profitability goal may come intoconflict with the recruitment goals, resulting in cream skimming effects. Thejob security offered at the company may also provide incentives at the individual level for using Samhall as a means of escaping unemployment rather thanas an employer of last resort for the most disabled.The evidence regarding cream skimming is mixed; the recruitment-toSamhall hazards of the prioritised groups, i.e., individuals with intellectual orpsychic disabilities, are significantly higher than the hazards for some, but notall, disability groups. Individuals without disabilities tend to be hired by thecompany, which suggests creaming and is contrary to the guidelines. Finally,the Samhall hazard increases slightly with time in unemployment. This is consistent both with Samhall acting as an employer of last resort and the existenceof incentives among individuals to use Samhall in order to escape unemployment.JEL codes: J24, J23, J45, I12.Keywords: Policy programmes, disability, performance standards.#We are grateful to Per Johansson, Erik Mellander, Harald Niklasson and seminar participants atIFAU and IUI for helpful comments. Financial support from the Institute of Labour Market Policy Evaluation (IFAU) and Marianne and Marcus Wallenbergs Stiftelse is gratefully acknowledged. Corresponding author. IUI, Box 5501, SE-114 85, Stockholm, Sweden. Tel: (08) 665 45 53.E-mail: PerS@iui.se.1

1 IntroductionFunctional impairment seems to afflict a non-negligible proportion of the workforce in many countries. According to a 1998 Statistics Sweden survey, about17 per cent of the working population in Sweden considers itself work disabled, i.e. that the work capacity is reduced because of a disability. Because ofhigh unemployment among the work disabled, there are also special labourmarket programmes targeted exclusively to this group. Around 20 percent oflabour market expenditures were spent on measures for the disabled in 2000(OECD, 2001) Moreover, there has also been a strong trend increase in participation in such programmes since the 1970’s (Skogman Thoursie, 1999). Thisdevelopment is not unique to Sweden. Many other countries exhibit a growingemphasis on various programmes for the disabled; in the US, for instance, disability insurance has grown to become the largest cash assistance programme,despite improving aggregate health (Autor & Duggan, 2003, Black et al.,2002).In Sweden, the two largest labour market programmes for the work disabledare subsidised employment (lönebidrag) and sheltered employment, of whichSamhall, a state-owned company, is the main provider. In addition, all traditional labour market programmes are open for the work disabled, and many ofthem are engaged in, e.g., educational programmes. Subsidised employmentengaged on average some 50,000 participants in 1999, according to the National Labour Market Board (AMS). There were around 33,000 disabled workers in sheltered employment, of which the majority – over 80 per cent – areemployed in Samhall. Sweden is among the countries that rely most heavily onsubsidised employment for the work disabled, whereas other OECD countriesfocus more on training and non-subsidised employment (Bergeskog, 2001).An important aspect of disability is that it is difficult to define, while associated (cash assistance) benefits for the disabled individual may be generous.This has prompted much research on the potential for moral hazard in disabilityinsurance and its effect on labour supply (see, e.g, Autor & Duggan, 2003,Black et al., 2002, Bound & Waidmann, 1992, Gruber, 2000). Gearing expenditures towards rehabilitation and work training programmes for the disabled,as in Sweden, may mitigate the problem by serving as an efficient work-testmechanism, to the extent that moral hazard among beneficiaries is important.The provision of handicap programmes may, however, also generate incentiveproblems. Under this regime, there is, among other things, a potential for creamskimming among programme providers. The difficulty of defining disability, incombination with loose monitoring, may leave room for programme providersto recruit participants without a disability or with less severe disabilities thanrequired by the (central) government, in order to pursue other objectives. Thispossibility has received little attention in the previous empirical literature onthe economics of disability, possibly because of lack of data.Heckman et al. (2002) analyse cream skimming in US programmes for thenon-disabled (the Job Training Partnership Act). The authors conclude that theefficiency cost from cream skimming is small. Melkersson (1999a) finds evi2

dence of cream skimming among the disabled in Swedish programmes; individuals with a previous attachment to the labour market seem to be favoured asparticipants. However, programmes exclusively targeted on the disabled are notconsidered explicitly. Skogman Thoursie (1999) considers the selection of individuals into a vocational rehabilitation project (Unga Handikappade) for thedisabled in Sweden. No direct evidence of cream skimming was found, but,e.g., individuals not living in institutions were more likely to be selected. Thiscould suggest creaming, to the extent that such individuals are more capablethan others.The purpose of this study is to shed light on the recruitment practices ofSamhall. In doing so, we intend to especially consider the potential for creamskimming. It is also possible to examine duration dependence, e.g., whether individuals are more likely, given disability status, to enter Samhall as the unemployment period proceeds. Such dependence may be due to the company’s objective to act as an employer of last resort, but may also reflect incentives forusing Samhall in a manner not intended by the Government. The employmentsecurity offered at the company may shift preferences towards Samhall jobs asthe unemployment period proceeds.Samhall’s main objective, as laid down by the Government, is to createmeaningful employment for individuals with severe work disabilities. Workerswith psychic, intellectual or multiple handicaps should be prioritised. There arealso other goals – the company should, inter alia, be profitable and decrease itsdependence on Government funding. It is not difficult to imagine potential conflicts between these objectives.In normal circumstances it is assumed that an employer wants to find a person with a high capacity for work, and tries to minimise employee turnoveramong trained and productive employees. The situation for Samhall is the reverse; the company should employ disabled individuals with very low capacityfor work, train these workers in order to increase their work capacity, and thenencourage them to seek other employment when fully trained and rehabilitated.If Samhall can, and does, choose employees on grounds that are in conflictwith stated recruitment guidelines, the benefits to society of the company’s activities may be overestimated. Available evaluations of the social benefit ofSamhall rest on the assumption that the opportunity cost of its disabled employees is zero, i.e., the workers were unemployed at the time of hiring andemployed in the company because of very slim or non-existing chances of finding employment elsewhere.1 If persons with no or “too little” disability arehired, this assumption is obviously violated.The data used in this study is a random selection of 10,000 unemployed individuals with work disabilities during the period 1995 to 1999. The recruitment practices and the potential for cream skimming are examined by analysing the determinants of the duration of unemployment until employment inSamhall, in general as well as conditional on participation in a programme forthe disabled. It is crucial for the analysis that the data on disability are not1In 1997, the social benefit of Samhall was estimated at 677 million SEK, which is equivalent toapproximately 75 million Euros (SOU 1997:64). See also Haavisto et al. (1993).3

measured with error. In order to gain information about the prevalence of sucherrors, we examine changes in disability status as well as the determinants ofthe external employment hazard for the subset of individuals who have foundemployment at Samhall. External employment is defined as either regular jobsor subsidised employment.The paper is organised as follows. Section 2 contains a brief description ofthe Samhall company, its goals and recruitment practices. The data set, containing disabled individuals registered as unemployed with the public employmentservice (PES), is presented in Section 3. This section also contains a discussionon the difficulty of defining and measuring disability. Section 4 presents theeconometric findings and Section 5 concludes.2 The Samhall company2Samhall is a limited liability company and part of Sweden’s active labour market policy. Samhall is the second largest wholly state-owned Swedish enterprise, as measured by the number of employees, and the country’s largest subcontractor. It employed some 27,000 workers with disabilities in 1999. Employment is created by producing goods and services, which should be marketed on equal terms with other businesses. About 60 per cent of employeeswork in the production of goods, and the other 40 per cent produce services.Industrial products include electronics, furniture, cabling, packaging, telecomcomponents and mechanical engineering. Among the services supplied areproperty services, cleaning, information technology support, service of technical aids, domestic services and catering services. The workplaces are spreadout across the country where there is considered to be a need for job opportunities for the disabled. The geographic locations are determined jointly with theNational Labour Market Administration (AMV).Government support to Samhall, 4,262 million SEK (about 470 million Euros) in 1999, covers roughly 90 per cent of the salaries paid to disabled employees. The cost of providing full-time employment for one worker is on average 21,000 SEK (2,300 Euros) per month, which is about twice as much asthe average subsidy required for one month’s full-time employment with wagesubsidies outside Samhall. The Government compensates Samhall for its additional costs, compared to other companies. The additional compensation shouldcover costs primarily for an adapted work pace, support measures for the workadaptation and costs incurred because employees with functional impairmentsare not laid off when there is a decline in the demand for Samhall’s goods andservices.32This section is based on information contained in Samhall’s publications “Group review andannual report”, various issues, and “Personalberättelse”, various issues, if not otherwise indicated.3According to a study by the Swedish National Audit Office (1999), the average work capacityof a Samhall employee is about 70 per cent of the work capacity of a person without a work disability. State subsidies are calculated under the assumption of a 40 per cent work capacity, which4

Samhall’s objectives are to provide meaningful employment for individualswith severe work disabilities, and rehabilitate employees so that employmentelsewhere (possibly subsidised employment) becomes possible. Recruitmentshould be targeted to disabled individuals with “difficulties on the labour market”. Samhall is also supposed to fulfil a specific set of measurable goals, determined by the owner. The targets, which, according to the company, are“equally important”, are set on an annual basis. In 1999, the targets were thefollowing: Recruitment from prioritised groups; more than 40 per cent of new recruits should belong to a prioritised group (determined by the owner), currently people with intellectual or psychic disabilities or multiple disabilities.Transitions to employment outside Samhall; more than 3 per cent ofemployees should find other employment, possibly subsidised, each year.Number of work hours supplied by disabled employees; Samhall shouldprovide almost 32 million work hours, equivalent to about 17,800 full-timeemployment contracts.Profitability; Samhall should have a positive financial result (given currentGovernment subsidies), and decrease the dependence on Government financial support.It is not hard to see that these goals may be conflicting. Most importantly, thetargeting towards individuals with the most severe disabilities should decreaseprofitability. As the most productive employees are the ones most likely to findjobs outside Samhall, the goal regarding transitions may also reduce profits.2.1 Recruitment to SamhallA job seeker does not apply for a vacancy in Samhall, but is assigned to a jobopening. Public employment service (PES) officials (or the branch in the PESthat deals specifically with the work disabled) are responsible for selecting individuals who can be considered suitable candidates for an opening in Samhall.The PES is normally expected to make an assessment of the individual and hisor her abilities, and direct the individual to employment in Samhall, subsidisedemployment o

# We are grateful to Per Johansson, Erik Mellander, Harald Niklasson and seminar participants at IFAU and IUI for helpful comments. Financial support from the Institute of Labour Market Pol-icy Evaluation (IFAU) and Marianne and Marcus Wallenbergs Stiftelse is gratefully acknowl-edged. Corresponding author. IUI, Box 5501, SE-114 85 .