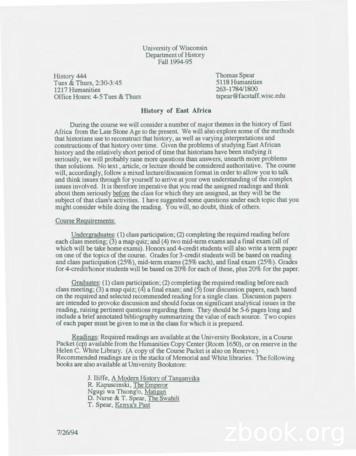 University of WisconsinDepartment of HistoryFall 1994-95Thomas Spear5118 Humanities263-1784/1800tspear@facstaff. wisc.eduHistory 444Tues & Thurs, 2:30-3 :451217 HumanitiesOffice Hours: 4-5 Tues & ThursHistory of East AfricaDuring the course we will consider a number of major themes in the history of EastAfrica from the Late Stone Age to the present. We will also explore some of the methcxisthat historians use to reconstruct that history, as well as varying interpretations andconstructions of that history over time. Given the problems of studying East Africanhistory and the relatively short period of time that historians have been studying itseriously, we will probably raise more questions than answers, unearth more problemsthan solutions. No text, article, or lecture should be considered authoritative. The coursewill , accordingly, follow a mixed lecture/discussion format in order to allow you to talkand think issues through for yourself to arrive at your own understanding of the complexissues involved. It is therefore imperative that you read the assigned readings and thinkabout them seriously before the class for which they are assigned, as they will be thesubject of that class's activities. I have suggested some questions under each topic that youmight consider while doing the reading. You will, no doubt, think of others.Course Requirements:Undergraduates: (1) class participation; (2) completing the required reading beforeeach class meeting; (3) a map quiz; and (4) two mid-term exams and a final exam (all ofwhich will be take home exams). Honors and 4-credit students will also write a term paperon one of the topics of the course. Grades for 3-credit students will be based on readingand class participation (25%), mid-term exams (25% each), and final exam (25%). Gradesfor 4-credit/honor students will be based on 20% for each of these, plus 20% for the paper.Graduates: ( 1) class participation; (2) completing the required reading before eachclass meeting; (3) a map quiz; (4) a final exam ; and (5) four discussion papers, each basedon the required and selected recommended reading for a single class. Discussion papersare intended to provoke discussion and should focus on significant analytical issues in thereading, raising pertinent questions regarding them. They should be 5-6 pages long andinclude a brief annotated bibliography summarizing the value of each source. Two copiesof each paper must be given to me in the class for which it is prepared.Readings: Required readings are available at the University Bookstore, in a CoursePacket (cp) available from the Humanities Copy Center (Room 1650), or on reserve in theHelen C. White Library. (A copy of the Course Packet is also on Reserve.)Recommended readings are in the stacks of Memorial and White libraries. The followingbooks are also available at University Bookstore:J. Iliffe, A Modem History of TanganyikaR. Kapuscinski, TheEmperorNgugi wa Thiong'o, MatigariD. Nurse & T. Spear, The SwahiliT. Spear, Kenya's Past7/26/94

3History 444: East Africa9/15Myths of Origin(film: 'The Shilluk' ?)What purposes do the Singwaya or Mbegha myths serve for the Mijikenda orShambaa? for the historian?T. Spear, Kenya's Past, 46-70.S. Feierman, The Sham baa Kingdom, 40-69 (reserve: DT443 F44 1974).recommended: sections dealing with origin traditions of the following:I. Kimambo, A Political History of PareJ. Lamphear, Traditional History of the Jie of UgandaG. Muriuki, A History of the Kikuyu (cf. J. Kenyatta, Facing Mount Kenya)T. Spear, The Kaya Complex & Traditions of Origin & their InterpretationR. Willis, A State in the Making (Fipa)9/20Processes of Historical ChangeWhat were some of the main factors that caused change in East Africa? How dothese modify our interpretation of origin traditions?T . Spear, Kenya's Past, 71-112.S. Feierman, The ShambaaKingdom, 70-108 (reserve: DT443 F44 1974)).recommended:J. Koponen, People and Production in Late Precolonial Tanzania, Chapt 2Cf. analyses of historical process in later chapters of any of the books listed under9/15 with their interpretations of origin traditions: are they congruent?C. Ambler, Kenyan Communities in the Age of ImperialismA. Frontera, Persistence and ChangeStates and State Formation9/22Farmers, Herders, and the Pastoral RevolutionThe pure pastoralist is a poor pastoralist.' True or false? And what have pastoralistsdone about it?J. Berntsen, 'The Maasai and their Neighbors,' African Economic History,2(1976), 1-11 (cp).T. Spear, 'Introduction' in Spear & Waller (eds.), Being Maasai, 1-18 (cp).recommended:S. Ambrose, 'The Introduction of Pastoral Adaptations to the Highlands of EastAfrica,' in J. Clark & S. Brandt (eds.), From Hunters to Farmers, 212-239.J. Lamphear, "The Persistence of Hunting and Gathering in a 'Pastoral World',"SUGIA, 7/2(1986), 227-265.P. Robertshaw & D. Collett, 'A New Framework for the Study of Early PastoralCommunities in East Africa,' JAH, 24(1983), 289-302.P. Robertshaw (ed.), Early Pastoralists of South-western KenyaT. Spear & R. Waller (eds.), BeingMaasaiR. Waller, 'Economic and Social Relations in the Central Rift Valley' in B. Ogot(ed.), KenvaintheNineteenthCentury(Hadith, 8), 83-151.G. Dahl & A. Hjort, Having HerdsC. Cassanelli, The Shaping of Somali Societv7/26/94

4History 444: East Africa9/27Farmers, Herders, and the Luo MigrationsHow do different historiallS account for the processes of migration andchangeamong the Luo?B. Ogot, A History of the Southern Luo, 31-62 (cp).S. Feierman, 'Economy, Society, & Language in Early East Africa,' in P. Curtin,et. al., African History, 130-139. (reserve: DT20 A619)recommended:D. Cohen & A. Odiambo, Siaya, 1-42.J. Crazzolara, The LwooR. Herring, D. Cohen & B. Ogot, 'The Construction of Dominance' in A. Salim(ed.), State Formation in Eastern Africa.B. Ogot 'The Role of Agriculturalists and Pastoralists' in T . Ranger (ed.),EmergingThemes in African HistoryA. Southall, Alur Society9/29States in the Interlacustrine RegionWhat are some of the lessollS of the Luo migration for state formation among the'Great States' of the Lake region?S. Feierman, 'Political Culture and Political Economy in Early East Africa,' in P.Curtin, et. al., African History, 147-171. (reserve: DT20 A619) .I. Berger, 'Dieties Dynasties and Oral Tradition' in Miller (ed.), The African PastSpeaks, 61-81 (cp).Exam: Undergraduate mid-term take-home handed out in class. Due at thebeginning of class 10/4.recommended: see Bibliography10/4Ethiopia and the Rise of the King of kingsBahru Zewde, A History of Modem Ethiopia, 1-80. (reserve: DT386 B27 1991)Exam: Mid-term due at the beginning of class. Late papers will be penalized.recommended: see BibliographyD. Levine, Greater EthiopiaThe Coast and Expansion of Trade10/6Fishing, Trade and the Development of Swahili SocietyWhy did Swahili society develop so differently from its mainland neighbors?D. Nurse & T . Spear, The Swahili, 68-98.recommended:G. Freeman-Grenville, The East African Coast (documents)W. Mackay, 'Precolonial History of the Southern Kenya Coast,' PhD, BostonJ. Middleton, The World of the SwahiliR. Pauwels, Hom and CrescentM. Ylvisaker, Lamu in the Nineteenth CenturyA. el Zein, The Sacred MeadowsN. Chittick, Kilwa and MandaP. Garlake, The Early Islamic Architecture of the East African Coast7/26/94

History 444: East Africa510/11 Rise of the Zanzibar Commercial EmpireHow was Zanzibar able to expand in the 19th c? What was the nature of its controlover the coast? And why did the abolition of the slave trade lead to an increase indomestic slavery in East Africa?S. Feierman, 'A Century of Ironies in East Africa' in P. Curtin, et. al., AfricanHistory, 391-417. (reserve: DT20 A619)recommended:A. Sheriff, Slaves, Spices and Ivory in ZanzibarF. Berg, 'Mombasa under the Busaidi Sultanate,' PhD, WisconsinF. Cooper, Plantation Slavery on the East Coast of Africa & Slaves to SquattersJ. Glassman, 'Social Rebellion & Swahili Culture,' PhD, WisconsinW. Whiteley, The Life ofTippu Tip10/13 Kenva: Trade and the Rise of 'Big Men' in the 19th cHow and why did trade affect politics in Kenya? How much did 'Big Men' reallytransform local politics?T. Spear, Kenya's Past, 113-146.recommended:A. Frontera, Persistence and Change, Chapts 2, 4, 5, 9.G. Muriuki, A History of the KikuyuB. Ogot (ed.), Kenya before 1900, arts. by Muriuki, Jackson, & SpearB. Ogot (ed.), Kenya in the Nineteenth Century (Hadith, 8)T. Spear, The Kaya Complex (Mijikenda)10/18 Tanzania: Trade, Political Violence, and the Loss of Environmental ControlIf trade led to political disaggregation in Kenya, how and why did it seem to havethe opposite effect in Tanzania?J. Iliffe, Modem History of Tanganyika, 40-87.S. Feierman, The ShambaaKingdom, 120-204 (reserve: DT443 F44 1967)recommended:J. Koponen, People and Production in Late Precolonial Tanzania, Chapts 3-4A. Roberts (ed.), Tanzania before 1900E. Alpers, Ivory and Slaves in East AfricaA. Roberts, 'Nyamwezi Trade' in Gray & Birmingham, Precolonial African TradeA. Shorter, Chiefship in Western TanzaniaG. Hartwig, The Art of SurvivalI. Kimambo, Political History of Pare & Penetration and Protest in TanzaniaJ. Giblin, The Politics of Environmental Control in Northeastern TanzaniaJ. Ford, The Role of Trypanosomiases in African EcologyD. Johnson & D. Anderson (eds.), The Ecology of SurvivalH. Kjekshus, Ecology Control and Economic Development in East African HistoryParadoxes of Colonial Conquest and Rule10/20 Establishment of Settler Colonialism in Kenya (film: 'White Man's Country')How did Kikuyu , Meinertzhagen, and the settlers each view colonial conquest?G. Muriuki, A History of the Kikuyu, 136-166 (cp).R. Meinertzhagen, Kenya Diary: 1902-1906,3,9-11, 13-14,39-41,49-53, 59-60,152-3 , 217-9 (cp) .7/26/94

9History 444: East Africa12/6The Debate over Mau Mau and Nationalism in Kenva (film: 'Kenyatta')What were the links, if any, bet.veen Mau Mau and the development of thenationalist movement in Kenya. And why do you think Kenyans of all politicalpersuasions continue to debate furiously over the meaning of Mau Mau today?Ngugi wa Thiong'o, Matigari. (compare with Ng'ang'a & Ogot above)recommended: see Bibliography12/8Nationalism in Tanganyika, Uganda, and ZanzibarWhy did nationalism take different forms in different countries?J. Iliffe, Modern History of Tanganyika, 405-435, 485-576. (That is a lot, Iknow, but skim to get the main points of Iliffe's argument.)recommended: see Bibliography for individual countries1African Socialism 112113 'African Socialism' in KenyaWhat does 'African Socialism' mean in Kenya?C. Leys, Underdevelopment in Kenya, 63-117. (reserve: HC517 K4 L49 1975)recommended:C. Leo, Land and Class in Kenya, esp Chapters 4-8.D. Gordon, Decolonization and the State in KenyaR. Kaplinsky, Readings on the Multinational Corporation in KenyaS. Langdon, 'The State of Capitalism in Kenya,' Review of African PoliticalEconomy, 8.M. Sorrenson, Land Reform in Kikuyu CountryG. Wasserman, The Politics of Decolonization in Kenya12115 Ujamaa in TanzaniaAssess the validity of Nyerere's claim that ujamaa was the basis of traditionalAfrican society in Tanzania.J. Nyerere, Freedom and Socialism, 231-250,337-366. (cp)Final exam: handed out in class. Due in my office at 4:00, Thurs, Dec 22nd.recommended: see Bibliography12/22 Final Exam due in my office at national Journal of African Historical StudiesJournal of African HistoryKenya Historical ReviewComparative Studies in Society and HistorySprache und Geschichte in Afrika

HEALTHCARE AND ECONOMIC GROWTH IN AFRICA
North Africa West Africa Central Africa Eastern Africa Southern Africa Africa On average, African governments spend 6.5-7.8% of the government budget on health, though with wide variation. Until 2010, the spending was uneven. Since then all sub-regions show an increase of budget allocation for health.
6m ago
24 Views

DFID’s Humanitarian Emergency Response in the Horn of Africa
Introduction to the Horn of Africa 1.1 The Horn of Africa is a group of countries situated in East Africa. For the purposes of this report, we use ‘Horn of Africa’ to refer to Kenya, Somalia and Ethiopia, the three most severely affected countries in the 2011 food crisis.1 The region contains large expanses of arid and semi-arid land
5m ago
16 Views

EAST AFRICA AND THE HORN IN 2022 - IRIS
EAST & SOUTHERN AFRICA / MARCH 2017 2 INTRODUCTION East Africa and the Horn1 is one of the most politically dynamic regions in the world. Almost nowhere else have geopolitical forces and regional ambitions combined to produce such volatile results.
6m ago
13 Views

THE NEW ECONOMIC HISTORY OF AFRICA
and visibility during the last twenty years. It is no longer considered to be at . Charles H. Feinstein, An Economic History of South Africa (Cambridge, 2005). Paul T. Zeleza’s A Modern Economic History of Africa, vol. . in sub-Saharan Africa in 1980 was only 48 years; a typical African mother had only a 30 per cent chance of seeing all .
5m ago
40 Views

The History of Africa - DiVA portal
Sub-Saharan Africa (2007). Robert O. Collins has also published Africa. A short history (2006), as well as editing a new edition of a three-volume work of histori-cal documents and classic contributions to the discipline: Problems in African history, of which Vol. 1 (2005) deals with pre-colonial Africa, Vol. 2 (2007) is
6m ago
8 Views
Popular Tags
Recent Views