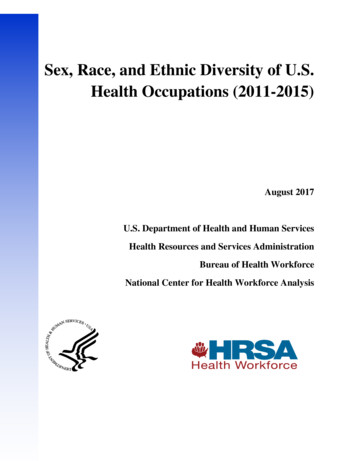 About the National Center for Health Workforce AnalysisThe National Center for Health Workforce Analysis (the National Center) informs public andprivate-sector decision-making on the U.S. health workforce by expanding and improvinghealth workforce data and its dissemination to the public, and by improving and updatingprojections of supply and demand for health workers. For more information about the NationalCenter, please visit our website at gested citation:U.S. Department of Health and Human Services, Health Resources and ServicesAdministration, National Center for Health Workforce Analysis. 2017. Sex, Race, and EthnicDiversity of U.S, Health Occupations (2011-2015), Rockville, Maryland.Copyright information:All material appearing in this documentation is in the public domain and may be reproduced orcopied without permission. Citation of the source, however, is appreciated.Sex, Race, and Ethnic Diversity of U.S. Health Occupations (2011-2015)1

Sex, Race, and Ethnic Diversity of U.S. Health Occupations(2011-2015)Key Findings Female workers represent the majority in 25 of the 30 U.S. healthoccupations analyzed here. There is considerable variation in racial and ethnic diversity by occupationalgroups. All minority groups, except Asians are underrepresented in Health Diagnosisand Treating occupations. Hispanics, Asians and Native Hawaiian/Pacific Islanders are underrepresentedamong Counselors and Social Workers (Community and Social Serviceoccupation). Personal Care and Service Occupations is the most diverse occupational group,followed by occupations belonging to the Healthcare Support group.BackgroundHealth Resources and Service Administration’s (HRSA) primary mission is to improvehealth and achieve health equity through access to quality services, a skilled healthworkforce and innovative programs.1 One key component of this mission is to strengthenthe health workforce to meet the needs of an increasingly diverse U.S. population.2,3,4Ensuring the nation has a diverse health workforce—especially in terms of male/femalerepresentation, as well as cultural and linguistic representation--is strategically essential, as1About HRSA from https://www.hrsa.gov/about/index.html.COGME report (Link) “Supporting Diversity in the Health urcepaper.pdf3U.S. Department of Health and Human Services, Health Resources and Services Administration, Bureau ofHealth Professions. (2006). The rationale for diversity in the health professions: A review of the evidence.Retrieved from sityreviewevidence.pdf4Wakefield M. Improving the Health of the Nation: HRSA’s Mission to Achieve Health Equity. Public HealthReports. 2014;129(Suppl 2):3-4.2Sex, Race, and Ethnic Diversity of U.S. Health Occupations (2011-2015)2

it has been shown to improve patient satisfaction, patient-clinician communication, andaccess to care for patient belonging to minority populations. 2,3,4The purpose of this brief is to provide an update to HRSA’s 2015 report 5on the distributionof sex, and race/ethnicity,6 among 30 health occupations in the U.S. using 2011-2015American Community Survey (ACS) data. These health occupations are grouped into sixcategories according to the 2010 Standard Occupational Classification (SOC) system7, whichis used by federal statistical agencies to classify workers into occupational categories forthe purpose of data collection and analysis. (Exhibit 1). The ACS survey reports the sex ofan individual as either male or female and this brief will follow the ACS format and use theterm sex to refer to male or female.Diversity in health occupations is measured by the representation of minority groups in ahealth occupation relative to their representation in the U.S. workforce.A lowerrepresentation of racial and ethnic group members in a health occupation relative to theirnumbers in the general population signifies that the racial or ethnic group isunderrepresented in the occupation. The U.S. workforce is defined as those who are 16years or older, and are currently employed or seeking employment.The 30 healthoccupations presented in this brief represent 10 percent of the nation’s workforce.Not all components of the health workforce are included or fully represented in this brief.Occupations on which data are not collected, or reported separately, by the U.S. CensusBureau are excluded.For example, data for public health nurses are not collectedseparately from other types of nurses. The brief also does not include some other importanthealth occupations because of the small sample size. These include public-health orienteddisciplines including epidemiologists, laboratorians and environmental health professionals.5U.S. Department of Health and Human Services, Health Resources and Services Administration, National Center for HealthWorkforce Analysis. Sex, Race, and Ethnic Diversity of U.S. Health Occupations (2010-2012), Rockville, Maryland; nchwa/diversityushealthoccupations.pdf6 Race/ethnic categories are Hispanic (regardless of race) non-Hispanic White, non-Hispanic Black/African-American, nonHispanic Asian, non-Hispanic American Indians and Alaska Natives, non-Hispanic Native Hawaiians and Other PacificIslanders, and non-Hispanic Multiple/Other Race. The race/ethnicity categories are consistent with OMB regulations. Forfurther details see the technical documentation s://www.bls.gov/soc/Sex, Race, and Ethnic Diversity of U.S. Health Occupations (2011-2015)3

FindingsSexThe data presented in Table 1 show the distribution by sex of the U.S. workforce among the30 identified health occupations. Although males represent a larger proportion of the U.S.workforce (52.8 percent), females represent the majority in 25 of the 30 health occupations.However, women are underrepresented in 4 Health Diagnosing and Treating Practitionersoccupations: Dentists (27.4 percent), Chiropractors (28.2 percent), Physicians (34.9percent), and Optometrists (40.1 percent). Women are also underrepresented in 2 HealthTechnologists and Technicians occupations: Emergency Medical Technicians (EMT) andParamedics (31.5 percent). Men have the lowest representation among Dental Hygienists(3.6 percent), Speech–Language Pathologists (4.0 percent), and Dental Assistants (5.4percent).Race and EthnicityWhites make up the majority of the U.S. workforce (64.4 percent) compared to Hispanics (16.1percent), Blacks or African Americans (11.6 percent), Asians (5.3 percent), and individualsreporting Multiple and Other races (1.8 percent). American Indians and Alaska Natives, andNative Hawaiians and Other Pacific Islanders represent less than 1 percent of the U.S. workforce(0.6 percent and 0.2 percent, respectively). Table 2).As in the U.S. workforce as a whole, White workers represent the majority component of all 30health occupations studied, representing over 50 percent of workers in almost every occupation.Compared to their representation in the U.S. workforce, Whites are overrepresented in 23 of the30 occupations. However, the representation of racial and ethnic minority groups varies byoccupational Categories. The racial and ethnic diversity in each health occupation group isdiscussed below.Community and Social Service OccupationsCounselors are professionals that provide counseling to individuals, couples, families and groupswith issues including substance abuse, mental health disorders, parenting concerns andSex, Race, and Ethnic Diversity of U.S. Health Occupations (2011-2015)5

relationship problems. Professional counselors must have a master's degree in counseling in moststates, but the licensure requirements vary by state. Social workers help people solve and copewith problems in their everyday lives. One group of social workers—clinical social workers—also diagnose and treat mental, behavioral, and emotional issues. Although most social workersneed a bachelor’s degree in social work, clinical social workers must have a master’s degree and2 years of post-master’s experience in a supervised clinical setting. Clinical social workers mustbe licensed in the state in which they practice.8Among Counselors and Social Workers, Hispanics, Asians, and American Indians and AlaskaNatives are underrepresented. On the other hand, Blacks have nearly twice their representation inthese occupations (Counselor 18.8 percent; Social Workers 21.5 percent) compared to theirrepresentation in the U.S. workforce. The proportion of White workers reflects their overallcontribution in the national workforce.Life, Physical, and Social Sciences, Health Diagnosing and Treating Practitioners, andHealth Technologists and Technicians OccupationsOccupations in the Life, Physical, and Social Sciences and Health Diagnosing and TreatingPractitioners groups often require many years of education and training. Whites are heavilyconcentrated in the Life, Physical, and Social Sciences and Health Diagnosing and TreatingPractitioners occupations. For example, Whites constitute almost 84 percent of the Psychologistworkforce. Hispanics (6.3 percent), Blacks (4.9 percent), Asians (3.4 percent) and AmericanIndians and Alaska Natives (0.2 percent) all have a substantially lower representation amongPsychologists than in the U.S. workforce.Hispanics are significantly underrepresented in all of the occupations in Health Diagnosing andTreating Practitioners occupations. Among Non-Hispanics, Blacks are underrepresented in alloccupations, except among Dieticians and Nutritionists (15.0 percent), and Respiratory Therapists(12.8 percent). Asians are underrepresented Speech–Language Pathologists (2.2 percent), andAdvanced Practice Registered Nurses (APRN) (4.1 percent). American Indians and AlaskaNatives, are underrepresented in all occupations except Physician Assistants, and have the l-service/social-workers.htmSex, Race, and Ethnic Diversity of U.S. Health Occupations (2011-2015)6

In the absence of more specific data, this brief does not seek to explain why variations in racialand ethnic composition of occupations exist; nor does the brief draw conclusions about howdiversity in health workforce affects access to health care and health outcomes. However, the2009 IOM Subcommittee on Standardized Collection of Race/Ethnicity Data for HealthcareQuality report emphasized that inadequate data on race, ethnicity, and language lowers thelikelihood of effective actions to address health disparities.9Compared to our January 2015 report, there have been minor improvements in minority grouprepresentation in the health occupations, with a small decrease of White individuals in everyoccupation and a small increase in representation in one or more of the other five racialcategories in every occupation. By examining the time trend, the information presented in thisbrief can be used to evaluate HHS initiatives aimed at increasing diversity, thereby supportingGoal II of the HHS Action Plan to Reduce Racial and Ethnic Health Disparities Action Plan:Strengthen the Nation’s Health and Human Services Infrastructure and Workforce.10 It couldalso be used to develop and refine policies and programs that seek to diversify the healthworkforce. For example, the information presented here can be useful for policy making aboutincreasing diversity in several types of HRSA programs including the NHSC and NURSE Corpprograms which aim to improve access to health care workers, particularly among underservedpopulations.Overall, the brief supports a continuation of efforts to improve the participation of racial andethnic minority groups in the U.S. health workforce.9IOM Subcommittee on Standardized Collection of Race/Ethnicity Data for Healthcare Quality. Race, Ethnicity,and Language Data: Standardization for Health Care Quality Improvement. Washington, DC: The NationalAcademies Press; 2009.10U.S. Department of Health and Human Services (HHS) Action Plan to Reduce Racial and Ethnic HealthDisparities. Available at https://minorityhealth.hhs.gov/assets/pdf/hhs/HHS Plan complete.pdf. accessed July 6,2015.Sex, Race, and Ethnic Diversity of U.S. Health Occupations (2011-2015)9

Ethnic Vegetables: Hispanic
ethnic fruits, vegetables, and . herbs, particularly in larger cities. One obvious reason for this is the increased ethnic diversity of these areas. Many ethnic groups, including Hispanics, have a high per capita consumption of fresh produce. Also contributing to the increased demand for ethnic produce is a greater emphasis
8m ago
28 Views

The Gospel and Race
Ethnic diversity of the NT world At one level, the NT divides the world into two groups, Jews and Gentiles. These two groups represent religious-racial division. But within the “Gentile” group, there is a great deal of diversity. There is cultural diversity: “Greeks and barbarians” (Rom 1:14); “barbarian, Scythian” (Col 3:11) There is ethnic/racial diversity
8m ago
13 Views

Ethnic Politics and Armed Conflict: A Configurational .
the distribution of state power along ethnic lines. The diversity-breeds-conflict school relies on demographic indices of heterogeneity that over-look how ethnicity relates to the state. Rather than high degrees of diversity, it is ethnic exclu-sion from state power and competition over the spoils of government that breed ethnic conflict.
8m ago
24 Views

What is driving Ethiopia's ethnic conflicts? - Africa Portal
ethnic mobilisation. Finally, debates continued between ethnic and Ethiopian nationalists on such fundamental issues as the history, identity and future destiny of the country. Above the cacophony of ethnic and anti-regime agitations prevailed a semblance of order and overall stability.15 Violent inter-ethnic conflicts erupted occasionally over 27
8m ago
34 Views

Diversity in the Workplace: Maintaining an Inclusive .
for diversity in the workplace? The responsibility for dealing with diversity issues belongs to every employee in the company. However, your HR department has official duties regarding diversity and can provide advice or guidance if you have questions. Diversity is just about race and gender, right? Race and
4m ago
41 Views

GUIDE - Rockstar Games
GUIDE. GTA Online Race Creator CREATE A RACE . the difference is to think of Laps as a NASCAR-style Race where you start and finish at the same location after completing one or more Laps. This type of Race . the actual Race setup. Enabling Wanted Level allows the police to chase Race
7d ago
1 Views

Student Sex Work Toolkit - University of Leicester
We recommend that this toolkit is used alongside the University of Leicester’s Student Sex Work policy and Leicester Students’ Union and Standing Together student sex work campaign. The aims of this toolkit are to outline: 1. The picture of student sex work within the UK 2. The legal context of the UK Sex Industry/Adult Entertainment .
8m ago
20 Views
Popular Tags
Recent Views