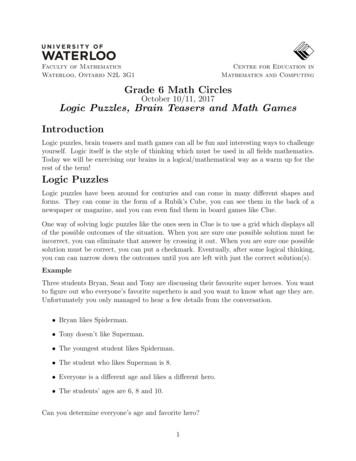 Faculty of MathematicsWaterloo, Ontario N2L 3G1Centre for Education inMathematics and ComputingGrade 6 Math CirclesOctober 10/11, 2017Logic Puzzles, Brain Teasers and Math GamesIntroductionLogic puzzles, brain teasers and math games can all be fun and interesting ways to challengeyourself. Logic itself is the style of thinking which must be used in all fields mathematics.Today we will be exercising our brains in a logical/mathematical way as a warm up for therest of the term!Logic PuzzlesLogic puzzles have been around for centuries and can come in many different shapes andforms. They can come in the form of a Rubik’s Cube, you can see them in the back of anewspaper or magazine, and you can even find them in board games like Clue.One way of solving logic puzzles like the ones seen in Clue is to use a grid which displays allof the possible outcomes of the situation. When you are sure one possible solution must beincorrect, you can eliminate that answer by crossing it out. When you are sure one possiblesolution must be correct, you can put a checkmark. Eventually, after some logical thinking,you can can narrow down the outcomes until you are left with just the correct solution(s).ExampleThree students Bryan, Sean and Tony are discussing their favourite super heroes. You wantto figure out who everyone’s favorite superhero is and you want to know what age they are.Unfortunately you only managed to hear a few details from the conversation. Bryan likes Spiderman. Tony doesn’t like Superman. The youngest student likes Spiderman. The student who likes Superman is 8. Everyone is a different age and likes a different hero. The students’ ages are 6, 8 and 10.Can you determine everyone’s age and favorite hero?1

Looking at the Superman column, you can see that neither Bryan or Tony like him. BecauseSean is the only possible option left, he must be the one who likes Superman. This alsoallows us to cross out the two other superheroes in Sean’s row because we know he willexclusively like Superman.The only superhero yet to be liked is Batman. Again because we know everyone likes adifferent superhero, we can say with certainty that Tony has to like Batman.Finally we know that each student is a different age. The student who likes Spiderman is 6and the student who like Superman is 8. This leaves the student who likes Batman to be10. This is the final piece of information we can deduce from this question, so you can nowfill any remaining boxes with crosses.With the filled grid, you can see that you have the answer to your original question. Bryan is 6 and he likes Spiderman. Sean is 8 and he likes Superman. Tony is 10 and she likes Batman.Superheroes - Logic GridSolve this logic puzzle to ﬁnd out the name, the age and the favorite superhero of each kid.AgeNamesSean Tony 6 years 8 years 10 years10 years 8 yearsBryanAge 6 yearsSupermanSpidermanBatmanSuperheroes 1. Bryan likes Spiderman.2. Tony doesn't like Superman.3. The youngest kid likes Spiderman.4. The kid who likes Superman is 8.3play more logic grids puzzles on Brainzilla.com

Math Brain TeasersThere are many tricky math questions in the world, but some are tricky for the wrongreasons. Brain teasers are a type of question which may seem simple at first, but their maingoal is to mislead you. See if you can spot the tricks in each of these questions.Example: The Missing Dollar ProblemThree friends were renting a hotel room together which cost 30 a night, so they decided toevenly split the bill and pay 10 each. After they finished paying, the hotel manager realizedthat the room they rented was really meant to only be 25. He went to return the 5 tothe three friends, but he noticed he couldn’t evenly distribute the money between them.Because the three friends did not know about the change in price, the manager decided toonly return 1 to each friend, and he would keep the other 2 for himself.Originally the three friends each payed 10 each, but with the refunded 1, they actuallyonly spent 9 each. Overall that means they spent 27 on the room. The manager kept 2for himself which brings the total up to 29. We started out with 30, so why do we nowonly have 29?SolutionA good way to start this problem is to track the total amount of money during each step ofthe question. 10 101. Each friend has 10. 10 302. The manager receives a 10payment from each friend. 253. The manager keeps 25 to pay forthe room and he goes to return 5 tothe friends. 5 25 1 1 1 24. The manager still has 25 to payfor the room, plus he gives 1 to eachfriend, and keeps 2 for himself.You can see that if you add up the total amount of money during each step, it is always 30.This tells us that there isn’t actually a missing dollar, but instead there must be an errorsomewhere in the question.So what is the error in the question?7

More Tricky Problems (Think Carefully!)1. What is the error in the “Missing Dollar Problem”?2. A certain tree grows in such a way that it doubles in height every year. When it reachesa height of 100 feet tall, the tree will be 38 years old. How old will the tree be when it is 50feet tall?3. If a pencil and an eraser 1.10 together, and the eraser costs 1.00 more than the pencildoes, how much does the pencil cost?4. In a car factory, 6 machines can make 6 wheels in 6 minutes. How long will it take 30machines to make 30 wheels?5. This is a famous problem called the “Monty Hall Problem”, which originally comes fromthe gameshow “Let’s Make a Deal”. Here’s how the problem goes: A gameshow contestant has to choose 1 of 3 doors, and they will receive whatever prizeis hidden behind that door. 2 of the doors contain a “zonk”, a prize that nobody would ever want (like a tennisracket made of glass, or a 10 pound bag of black licorice). The other door has anawesome prize like a new car or a free vacation. Once the contestant chooses their door, the host will eliminate one of the zonks, andthen give the contestant an opportunity to either keep the prize behind the door theychose, or they can switch to the remaining door.The question now is, if they switch to the other door, what are their odds of winning theawesome prize?a) 1/3b) 1/2c) 2/3Before we discuss the correct answers, carefully go through each of these four questions andmake sure your answer makes sense!8

Another Useful TrickAn interesting mathematical property of a Sujiko is that the numbers in both diagonallyopposite corners and the opposite diagonally opposite numbered boxes must sum to a number45 greater than the number in the center box. This can be seen more clearly down below.In the pictures above, the sum of each set of shaded boxes should be equal to ‘E’ 45. Thissame rule applies for the shaded boxes of both pictures! How do we know this is true ingeneral? Well lets do the addition and see if we can prove it!Looking at the left diagram, the property tells us that C G w z E 45. First of all,what do ‘w’ and ‘z’ equal?w A B D Ez E F H INow lets try adding everything together.Sum Of Shaded Boxes w z G C (A B D E) (E F H I) G C E (A B C D E F G H I)(1)Notice how we have ‘E’ plus one of every letter. We know each letter represents the value ofone of the squares in the Sujiko puzzle, and because we have all 9 different letters, it meanswe will have all 9 different possible values which can be put into a Sukijo puzzle.Sum Of Shaded Boxes E (A B C D E F G H I) E (1 2 3 4 5 6 7 8 9) E 45(2)If you want, you can check to see that this property really does work by using it on theSujiko from our example on the previous page.11

Logic puzzles, brain teasers and math games can all be fun and interesting ways to challenge yourself. Logic itself is the style of thinking which must be used in all elds mathematics. Today we will be exercising our brains in a logical/mathematical way as a warm up for the rest of the term! Logic Puzzles

Grade 7/8 Math Circles - University of Waterloo
Waterloo, Ontario N2L 3G1 Mathematics and Computing Grade 7/8 Math Circles November 13 & 14 &15 2018 Coordinate Systems Introduction Coordinate systems decribe location in a space. Speci cally, we want them to describe any location in a space that we care about. The common spaces you sh
4m ago
37 Views

Uptown Vitality Report 2019 - Uptown Waterloo Business .
part of the larger Toronto-Waterloo Innovation Corridor intensification strategy to attract jobs and talent to Waterloo Region (www.thecorridor.ca). The purpose of this Uptown Vitality Report (UVR) is to provide a high-level overview of activity and economic growth in the heart of Waterloo
1m ago
6 Views

RV Campground Power Distribution (Ontario) RV
The Ontario Electrical Safety Authority came into being in 1999 with a mandate from the Ontario Government. The OESA make the laws in Ontario regarding electrical matters and decreed that the rules as laid out in the Canadian Electrical Code would be the law of the land in Ontario and called them the Ontario
23d ago
3 Views

Exploring the Planning Fallacy: Why People Underestimate .
Department of Psychology, University of Waterloo, Waterloo, Ontario, Canada. This article is based on a doctoral dissertation submitted by Roger Buehler to the University of Waterloo. The research was supported by a doctoral fellowship to Roger Buehler and a research grant to each au-thor from the Social Sciences and Humanities Research Council of
8m ago
18 Views
Popular Tags
Recent Views