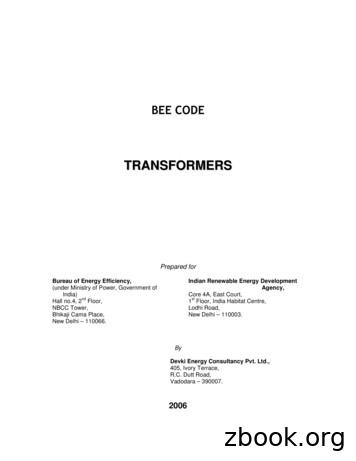 1OBJECTIVE & SCOPE1.1Objective1.1.1The objective of this BEE Code is to establish rules and guidelines for conducting testson electrical distribution transformers used in industrial, commercial and such other loadcenters at site conditions.1.1.2The overall objective is to evaluate the energy losses in the transformers at differentoperating conditions. The energy losses in a transformer consist of relatively constantiron losses and dielectric losses, and variable load losses; which vary with the load.1.1.3In general, matching the levels of precision of instruments available during testing atworks is difficult and costly. Data from test certificates from manufacturers can be used inmajority of the cases. Tests in this code are minimised and simplified so that it can beconducted by easily available instruments under site conditions.1.2Scope1.2.1This standard covers electrical power distribution transformers of single phase/threephase and oil cooled or dry type but restricted to those having secondary voltages in theL.T distribution range of 415 V/240 V. The ratings covered are 25 kVA and upwards.1.2.2The standards applicable for testing transformers a manufacturer’s works are as under:1. IS 2026- 1977– Specifications for Power Transformers2. IEEE Standard C57.12.90 – 1993: IEEE Standard Test Code for Dry TypeDistribution Transformers3. IEC 60726: Dry type power Transformers4. IEC 60076: Power transformers - general5. IEC 61378: Converter transformers1.2.3Tests described in this code are as under:1.2.3.4.Measurement of winding resistanceMeasurement of no load lossesMeasurement of load lossesMeasurement of operating load and winding temperature3

2.2Definition & Description of termsPrimary winding: The winding where incoming power supply is connected. Usually thisrefers to High Voltage side in distribution transformersSecondary winding: the winding where the principal load is connected. Usually thisrefers to Low Voltage side in Distribution transformers.No load loss: The losses taking place in a transformer when only primary winding isenergized and all secondary windings are open. They represent constant losses in atransformer.Dielectric loss: The losses taking place in a stressed dielectric medium (insulation)subjected to stress reversals.Iron losses: The losses taking place in the magnetic core. There are two types;hysterisis losses and eddy current losses.Hysteresis losses: This loss depends upon the area of the hysteresis loop, which isdepending upon the maximum flux density, the type of material and frequency. It isindependent of the waveformEddy current losses in core: This is loss due to circulating currents induced by voltagein the thickness of core laminations. It depends upon thickness of lamination, pathresistance which is depended upon the type of material, R.M.S. flux density i.e. waveformand square of frequencyEddy losses in a conductor: For a thick conductor, the induced voltage within theconductor cross section due to self linkage and due to current in other conductor varies.The difference in induced voltage in the local path in the thickness of the conductorcauses extra eddy current loss. This loss varies with square of current and square offrequency.2Stray losses: All current dependant losses in a winding other than the basic I R losses.Stray losses include eddy loss in the conductor, eddy losses in structural paths in closeproximity to outgoing conductor and the eddy loss in general in the structural parts. In drytype transformers, the last two mentioned types of stray losses are absent.Form factor: It is the ratio of the r.m.s. value of a waveform to the average value overone half cycle. For a sine wave the value of form factor is 1.11. For distorted waves withhigher peak values, the form factor is higher.Harmonics: Frequencies other than the main fundamental frequency of current orvoltage which are present in a distorted wave as multiples of base fundamentalfrequency.Transformer Polarity: This refers to the relative direction of the induced voltagesbetween the high voltage terminals and the low voltage terminals. During the AC halfcycle when the applied voltage (or current in the case of a current transformer) is from H1to H2 the secondary induced voltage direction will be from X1 to X2. In practice, Polarityrefers to the way the leads are brought out of the transformer.Burden: The load on an instrument transformer is referred to as a “burden”.5

Short circuit impedance & Impedance voltage: The impedance voltage of atransformer is the voltage required to circulate rated current through one of the twospecified windings; when the other winding is short circuited with the winding connectedas for rated operation. The short circuit impedance is the ratio of voltage and currentunder above conditions.The resistive component of short circuit impedance, gives a parameter for estimating loadlosses. These losses include eddy current losses in the conductors and structure as asmall portion. Their contribution is materially enhanced due to harmonic currents in load.Exact determination by test is difficult and simplified test at low current suffers from thedisadvantage of a high multiplying factor; but it is expected to give representative values.6

33.1GUIDING PRINCIPLESSafety precautionsThe tests require operation on the HV side of a transformer. Extreme caution should beexercised in consultation with the plant personnel to see that HV system is deactivatedand discharged safely prior to access. Similarly while energizing from LV side, the reachof induced HV side voltage should be restricted to prevent damage to personnel/equipment through inadvertent access.Some simple minimum steps for ensuring safety are as follows.1. Qualified engineers should be conducting the test. Safety work permit should beissued to the person.2. The transformer should be on normal tap3. Before conducting the tests, the HT area should be clearly demarcated to set upa suitable physical barrier to prevent inadvertent entry /proximity of personnel inthe HT zone.4. The HT supply should be switched off by the primary breaker visibly and thendisconnected by the isolator; followed by disconnection on the LT side.5. The HT side terminals should be discharged by a proper grounding rod, which iscompatible with the voltage level on the HT side.6. The primary terminals should then be physically disconnected and left open.7. It should be remembered that application of even 4 volts on the secondary LTside can induce more than 100 volts on the 11 kV HT side, as per transformerratio. Similarly abrupt breaking of relatively small D.C. currents can give largevoltage spikes on the HT side.3.23.2.1Sources of errors and precautionsRatio and phase angle errorsFor no load test, the circuit power factor is very low. (0.05 to 0.15). Hence more sensitiveenergy meters calibrated for preferably 0.1 or 0.2 pf should be used. Indicating metersshould be so selected as to give an indication in 20% to 100% full scale. Digital meterscan give more reliable low end readings.Electro-dynamic watt meters have a small angle of lag for the pressure coil circuit bywhich the pressure coil flux lags the applied circuit voltage. This angle of lag should beadded to measured angle like CT phase angle error. Electronic energy meters/wattmeters may not have this error.CTs used will have a ratio error within 0.5%. The phase angle of the CT secondarycurrent with respect to real current can be leading by phase angle error ‘cd’ stated inminutes. This error causes a very significant effect on measured power and tends to givea higher reading. It is recommended that the CT’s used should be calibrated to haveknown ratio and phase angle errors over the working range and for the intended burdenof the wattmeter and the ammeter.7

Recommendations:It is recommended to use portable power analysers or digital energy meters calibratedwith CTs of suitable range and the errors be known in the entire current range.3.3Estimation of transformer efficiencyThe total losses in a transformer at base kVA as well as at the actual load are estimated.From the rated output and measured output, transformer efficiency is calculated asfollows.Efficiency at full load Rated output 100 % Rated output Total losses at full load .Efficiency at actual load Output power at actual load 100 %Outputpoweratactualload Totallossesatactualload Considering the fact that distribution transformers are usually operated at around 50% ofthe rating, estimation of losses at 50% load can also be done by extrapolation methodand efficiency at 50% load can be calculated.8

44.1INSTRUMENTS AND METHODS OF MEASUREMENTSMeasurements/estimation of parametersThe measurements of the following parameters are required for transformer lossestimation.1.2.3.4.5.6.4.2Power inputCurrentVoltageFrequencyWinding ResistanceTemperature of windingPower inputA wattmeter or a suitable electronic 3-phase 4-wire energy meter calibrated for 0.1 p.fcan be used for measurement of power in no load test and short circuit test. It also givesa power reading or for improved resolution, energy reading over a period of measuredtime is possible. Modern digital energy meters have indications of voltage, current, powerand frequency; hence more convenient for site measurements.Electronic 3 phase 4 wire energy/power meters of 0-5A range and multiple voltageranges from 60 V to 500 V with a full-scale indication in the range of 0.1 pf and 0.5-classaccuracy is preferred.Separate single phase energy/power meters can be used but a single 3 phase 4- wireenergy meter is more convenient.CT’s of bar primary type 0.5-class accuracy with multiple ranges can be used. The CT'sshould be calibrated to indicate its ratio error and phase angle error at 10% to 100%current with the specific burden of ammeters and power meters used.During use, the phase angle error is directly taken from the calibration curve for specificcurrent readings. Ratio error can be taken as constant or the nominal ratio can be taken.4.2.1No load loss measurementsNo load losses can be measured from the L.V. side using an adjustable three phasevoltage source with neutral. It can be derived from mains or a D.G. set. The voltage andfrequency should be steady and at rated values and as near as possible to 50 Hz and itshould be measured. This test can give a basic value near rated conditions if allprecautions are taken.The L.V. side is energised at the rated tap at rated voltage and power is measured bythree watt meters or 3 phase, 4 wire single wattmeter/energy meter. Connections aremade as given in figure 4.1 for single phase transformers and figure 4.2 for 3 phasetransformers. Due to energisation on L.V. side, PT’s are avoided.9

The no load energy consumption, Enl can be measured in the 3 phase – 4 wire meterconnected as in figure-4.3. Time taken, t, between initial and final readings are noted.Average no load power is estimated from average energy consumption and time taken. Average energy consumption Time Enl 3600 Watts t Average no load power consumption, W nl ‘ Where Enl Energy consumption in at no load during ‘t’ seconds4.2.2Load loss TestThis test is done by energizing on the H.V. side at a suitable low voltage, while shorting theL.V. side (secondary). The applied voltage is adjusted to pass the needed current in theprimary/secondary. In order to simulate conditions nearest to full load, it is customary topass 100%, 50% or at least 25% of full load current.A simplified test using a single phase source for 3 phase transformers is explained below.The test configuration in given in figure 4.4.Figure 4-4: Load loss test using low voltage supplyTo avoid CT’s and PT’s, this method can be used at current levels of 2 to 5 A andmeasurement of load losses is done at this condition. This measured load loss is thenextrapolated to actual load currents to obtain l 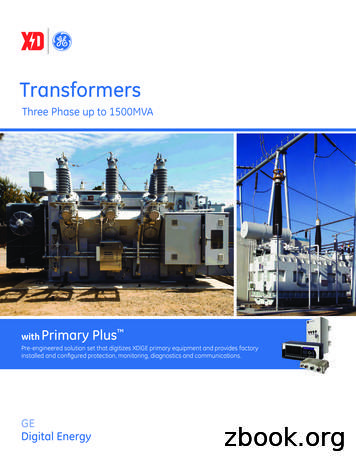 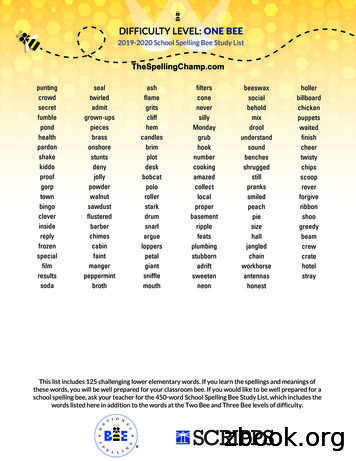 DIFFICULTY LEVEL: ONE BEE - The Spelling Champ
your classroom bee. If you would like to be well prepared for a school spelling bee, ask your teacher for the 450-word School Spelling Bee Study List, which includes the words listed here in addition to the words at the Two Bee and Three Bee levels of difficulty. 25. admit (verb) to accept as the truth. 26.
24d ago
0 Views 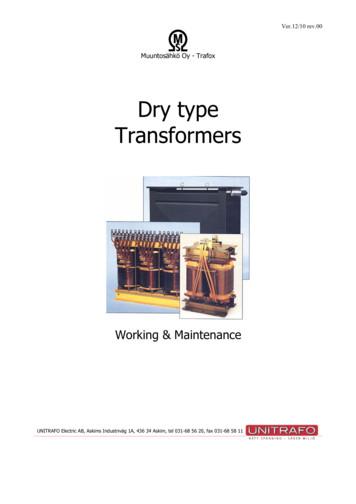 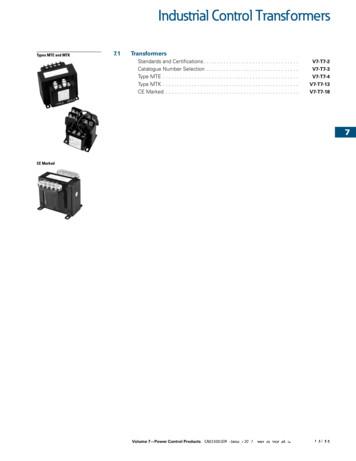 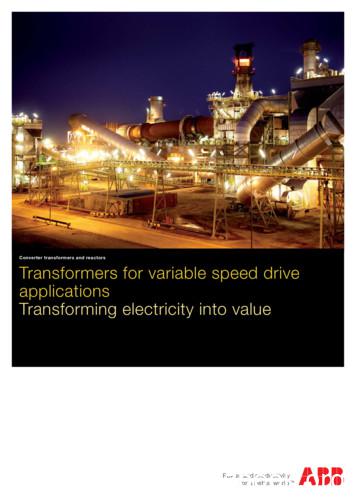 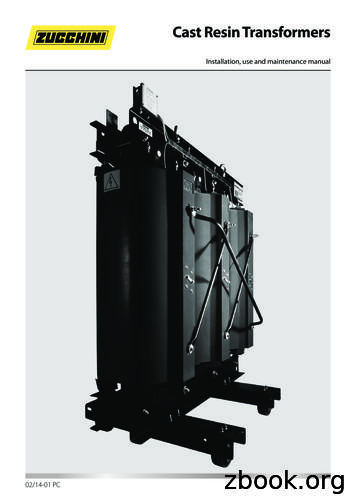 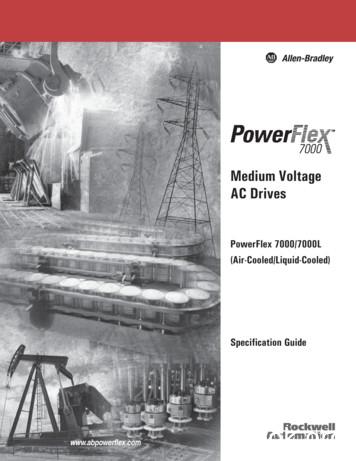 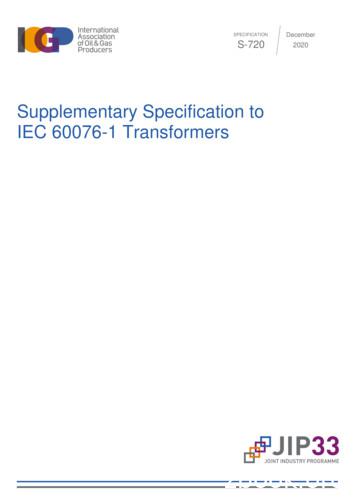 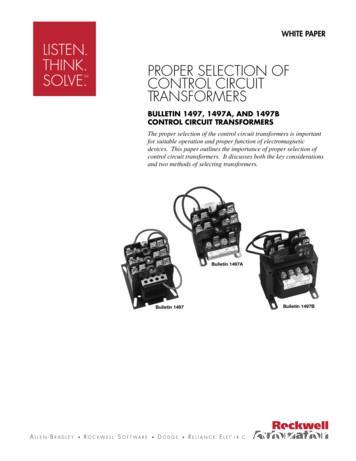 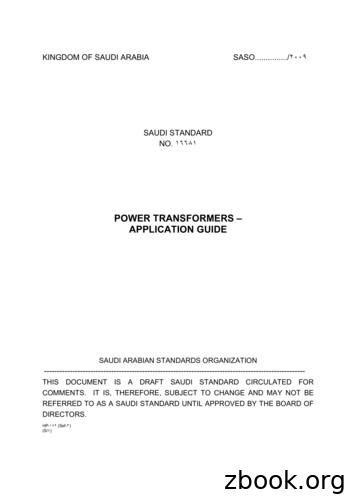 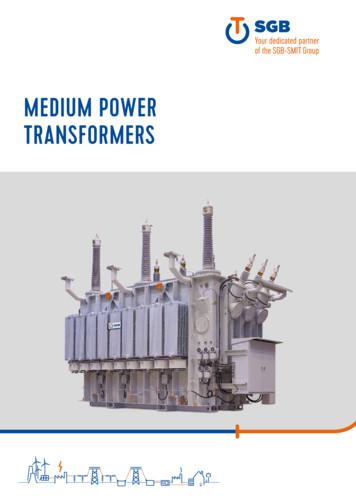 MEDIUM POWER TRANSFORMERS - SGB-SMIT
the Group develops and produces power transformers in the range from 50 kVA up to incl. 1,200 MVA within the voltage range up to 765 kV. The product line includes oil transformers, phase shifting transformers, cast-resin transformers, compact stations and shunt and series reactors. Wit
13d ago
5 Views 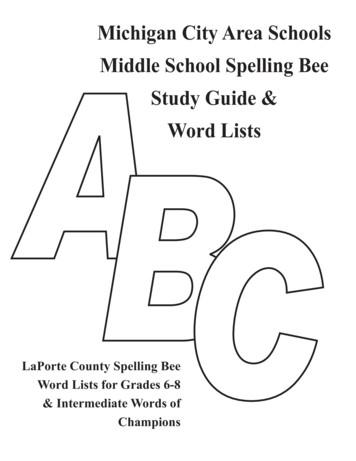