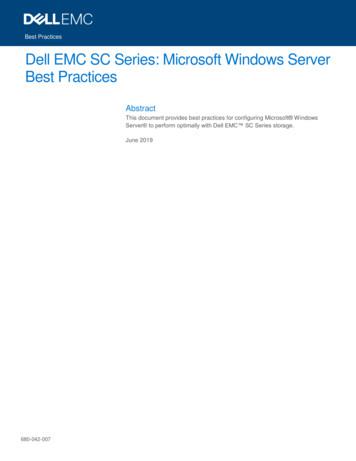 RevisionsRevisionsDateDescriptionOctober 2016Initial release for Windows Server 2016November 2016Update to include BitLocker contentFebruary 2017Update MPIO best practicesNovember 2017Update guidance on support for Nano Server with Windows Server 2016June 2019Update for Windows Server 2019 and SCOS 7.4; template updateAcknowledgementsAuthor: Marty GlaserThe information in this publication is provided “as is.” Dell Inc. makes no representations or warranties of any kind with respect to the information in thispublication, and specifically disclaims implied warranties of merchantability or fitness for a particular purpose.Use, copying, and distribution of any software described in this publication requires an applicable software license.Copyright 2016–2019 Dell Inc. or its subsidiaries. All Rights Reserved. Dell, EMC, Dell EMC and other trademarks are trademarks of Dell Inc. or itssubsidiaries. Other trademarks may be trademarks of their respective owners. [5/29/2019] [Best Practices] [680-042-007]2Dell EMC SC Series: Microsoft Windows Server Best Practices 680-042-007

IntroductionNote: Nano Server was originally released as an additional installation option (in addition to Core and WithDesktop) for Windows Server 2016. Microsoft support for Nano Server as a physical host or virtual machine(VM) OS was discontinued about a year after its initial release by Microsoft. As of the 1709 (September 2017)semi-annual channel release of Windows Server, Nano Server is supported by Microsoft as a container OSonly.Generally, when a Windows Server OS approaches end of life (end of support), hardware vendors includingDell EMC will also discontinue support for the OS with new product releases. Reasons include the following: 1.4Testing and certification resources are limited.It is much more difficult to obtain hardware specific patches and bug fixes from Microsoft as aWindows Server OS enters extended support phase and approaches end of life.It encourages customers to modernize.Advantages of using SC Series storage with Windows ServerWhile Microsoft has continued to make improvements to Storage Spaces Direct (S2D), Storage Replica, andhyper-converged infrastructure (HCI) offerings, the rich feature set and management tools offered with amature SAN or DAS product such as SC Series storage makes it a compelling choice when architecting thestorage component of any Windows Server solution. Microsoft often showcases the IOPS performance of anoptimally-configured S2D or HCI configuration. However, raw IOPS potential is only part of the equation whenarchitecting a solution, just as raw horsepower is only part of the equation when deciding what sportscar topurchase.SAN and DAS features and management tools including intelligent snapshots, managed replication,monitoring, alerting, and DR can be equally or even more important to server and storage administrators thanraw IOPS potential. While native S2D or HCI Microsoft solutions may offer similar basic features as a SAN orDAS solution, the rich set of SC features and management tools listed in section 1.1 presents administratorswith a much more powerful and complete solution for managing, monitoring, reporting, replicating, andprotecting their storage investment and data.1.5Best practices overviewBest practices are typically based on and developed from the collective wisdom and experience of manyusers over time, and this learning is built into the design of next-generation products. With maturetechnologies such as Windows Server and SC Series storage arrays, best practices are already factored in tothe default configurations, settings, and recommendations.Because default settings typically incorporate best practices, tuning is often unnecessary (and discouraged)unless a specific design, situation, or workload is known to benefit from a different configuration. One of thepurposes of this best-practices documents is to call attention to situations where using a default setting orconfiguration may not be optimal.Some common goals of best practices include: 8Minimize complexity and administrative overheadOptimize the performance of a workloadMaximize securityEnsure resiliency and recoverabilityMaximize return on investment over the life of the hardwareDell EMC SC Series: Microsoft Windows Server Best Practices 680-042-007

IntroductionIt is important to remember that best practices are baselines that may not be ideal for every environment.Some notable exceptions include the following: A legacy system that is performing well that has not reached its life expectancy may not adhere tocurrent best practices. Often the best course of action is to run legacy configurations until they reachtheir life expectancy because it is too disruptive or costly to make changes outside of a normalhardware progression or upgrade cycle. Dell EMC recommends upgrading to the latest technologiesand incorporating current best practices at key opportunities such as upgrading or replacinginfrastructure.A common best practices tradeoff is to implement a less-resilient design on lower-tier hardware (tosave cost and reduce complexity) in a test or development environment that is not business critical.Note: While following the best practices in this document is strongly recommended by Dell EMC, somerecommendations may not apply to all environments. For questions about the applicability of these guidelin

Warranty: Dell EMC Product Warranty and Maintenance Table
“Dell EMC”, as used in this document, means the applicable Dell sales entity (“Dell”) specified on your Dell quote or invoice and the applicable EMC sales entity (“EMC”) specified on your EMC quote. The use of “Dell EMC” in this document does not indicate a change to the legal name of the Dell
1m ago
5 Views