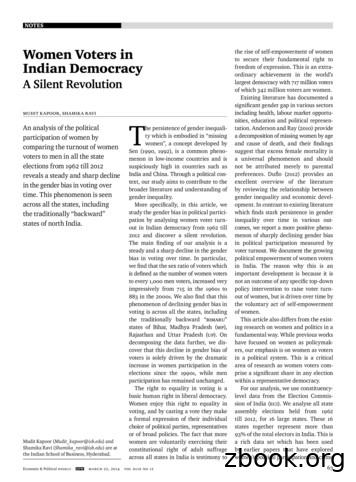 NOTESWomen Voters inIndian DemocracyA Silent RevolutionMudit Kapoor, Shamika RaviAn analysis of the politicalparticipation of women bycomparing the turnout of womenvoters to men in all the stateelections from 1962 till 2012reveals a steady and sharp declinein the gender bias in voting overtime. This phenomenon is seenacross all the states, includingthe traditionally “backward”states of north India.Mudit Kapoor (Mudit [email protected]) andShamika Ravi (Shamika [email protected]) are atthe Indian School of Business, Hyderabad.Economic & Political WeeklyEPWmarch 22, 2014The persistence of gender inequality which is embodied in “missingwomen”, a concept developed bySen (1990, 1992), is a common phenomenon in low-income countries and issuspiciously high in countries such asIndia and China. Through a political context, our study aims to contribute to thebroader literature and understanding ofgender inequality.More specifically, in this article, westudy the gender bias in political participation by analysing women voter turnout in Indian democracy from 1962 till2012 and discover a silent revolution.The main finding of our analysis is asteady and a sharp decline in the genderbias in voting over time. In particular,we find that the sex ratio of voters whichis defined as the number of women votersto every 1,000 men voters, increased veryimpressively from 715 in the 1960s to883 in the 2000s. We also find that thisphenomenon of declining gender bias invoting is across all the states, includingthe traditionally backward “BIMARU”states of Bihar, Madhya Pradesh (MP),Rajasthan and Uttar Pradesh (UP). Ondecomposing the data further, we discover that this decline in gender bias ofvoters is solely driven by the dramaticincrease in women participation in theelections since the 1990s, while menparticipation has remained unchanged.The right to equality in voting is abasic human right in liberal democracy.Women enjoy this right to equality invoting, and by casting a vote they makea formal expression of their individualchoice of political parties, representativesor of broad policies. The fact that morewomen are voluntarily exercising theirconstitutional right of adult suffrageacross all states in India is testimony tovol xlix no 12the rise of self-empowerment of womento secure their fundamental right tofreedom of expression. This is an extraordinary achievement in the world’slargest democracy with 717 million votersof which 342 million voters are women.Existing literature has documented asignificant gender gap in various sectorsincluding health, labour market opportunities, education and political representation. Anderson and Ray (2010) providea decomposition of missing women by ageand cause of death, and their findingssuggest that excess female mortality isa universal phenomenon and shouldnot be attributed merely to parentalpreferences. Duflo (2012) provides anexcellent overview of the literatureby reviewing the relationship betweengender inequality and economic development. In contrast to existing literaturewhich finds stark persistence in genderinequality over time in various outcomes, we report a more positive phenomenon of sharply declining gender biasin political participation measured byvoter turnout. We document the growingpolitical empowerment of women votersin India. The reason why this is animportant development is because it isnot an outcome of any specific top-downpolicy intervention to raise voter turnout of women, but is driven over time bythe voluntary act of self-empowermentof women.This article also differs from the existing research on women and politics in afundamental way. While previous workshave focused on women as policymakers, our emphasis is on women as votersin a political system. This is a criticalarea of research as women voters comprise a significant share in any electionwithin a representative democracy.For our analysis, we use constituencylevel data from the Election Commission of India (ECI). We analyse all stateassembly elections held from 1962till 2012, for 16 large states. These 16states together represent more than93% of the total electors in India. This isa rich data set which has been usedby earlier papers that have exploredwomen’s political participation and crime63

of women. This article also differs from the exist-ing research on women and politics in a fundamental way. While previous works have focused on women as policymak-ers, our emphasis is on women as voters in a political system. This is a critical area of research as women voters com-prise a signiﬁ cant share in any election

Challenges to Democracy
The third challenge of deepening of democracy is faced by every democracy in one form or another. This involves strengthening of the institutions and practices of democracy. This should happen in such a way that people can realise their expectations of democracy. But ordinary people have different expectation
6m ago
7 Views

2020 - Home Working America
A!ordable Care Act matter less to voters than the need to take action. We asked voters for their opinion on various policy proposals at the center of discussion in 2020. The chart below shows the answers to these questions, with responses sorted by Democratic base and modeled persuad - able voters. For both Democratic base and per -
7m ago
5 Views

Amartya Sen Democracy and Its Globail Roots
having democracy in Iraq, or in any other country that is deprived of it. Nor is there a general ground here for uneasiness about providing global support for the struggle for democracy around the world, which is the most profound challenge of our tines. Democracy
6m ago
35 Views

IS DEMOCRACY IN TROUBLE?
likely to lead some people to favor populist candidates with authoritarian beliefs. Some worry that politicians who dwell on people’s fears of social and economic change threaten liberal democracy. Evidence Liberal Democracy Is Not in Trouble Other researchers disagree that liberal democracy is
5m ago
3 Views

LEAGUE OF WOMEN VOTERS BRAND STANDARDS
BRAND STANDARDS. lvor 2 L SS Proper use of an organization’s trademarks, including its brands and logos, are crucial to maintaining its goodwill and valuable reputation. For this reason, the League of Women Voters’ br
6m ago
2 Views
Popular Tags
Recent Views