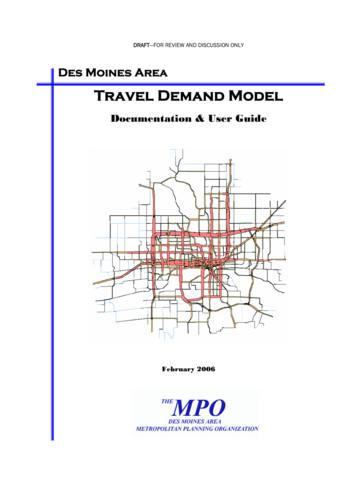 DRAFT—FOR REVIEW AND DISCUSSION ONLY1. IntroductionThe purpose of this report is to describe in detail the trip based travel demand model developed for the DesMoines metropolitan area. Travel demand models are used for simulating current travel conditions and forforecasting future travel patterns and conditions. Once travel demand is known, the planner can assess theperformance of alternative transportation systems and identify various impacts that the system will have onthe urban area, such as delay and emission. With information on how transportation systems perform, and themagnitude of their impacts, planners can provide decision-makers with some of the information they need toevaluate alternative methods of supplying a community with transportation services.This travel demand model was developed by staff of the Des Moines Area Metropolitan Planning Organization(MPO), Iowa, using Caliper's TransCAD software. An important, essential use of the 2001 National HouseholdTravel Survey (NHTS) Add-on data in the Des Moines metropolitan area is the survey’s input in the Des MoinesArea MPO’s travel demand model. The Des Moines Area MPO used the traditional modeling process of tripgeneration, trip distribution, and trip assignment to develop the travel demand model. The Des Moines AreaMPO does not conduct mode choice modeling. The 2001 NHTS Add-on data was able to assist the Des MoinesArea MPO in determining whether mode choice modeling would be a valuable use of time and resources.Transit usage accounted for less than one percent of the total trips, according to the 2001 NHTS Add-on data.Based on the 2001 NHTS Add-on survey data, it was decided that at the present time transit usage was not alarge enough percentage of total trips to warrant the creation of a mode choice model.Trip generation forecasts the number of trips from urban activity. For example, the number of trips that aregenerated by a shopping center is quite different from the number of trips generated by an industrial complexthat takes up about the same amount of space. In trip generation, the planner attempts to quantify therelationship between urban activity and travel. The output of the trip generation model is a table of trip ends:the number of trips that are produced and the number that are attracted. The 2001 NHTS Add-on data, the2000 U.S. Census data, and the 2000 Census Transportation Planning Package (CTPP) were the main inputdata for trip generation analysis of Des Moines Area MPO’s travel demand model.Trip distribution procedures determine where the trips produced in each zone will go and how they will bedivided among all other zones in the study area. The trip distribution analysis used the gravity model which isbase on travel time as measures of trip impedance. The output of trip distribution is a set of tables that showthe travel flow between each pair of zones.The trip assignment model predicts the paths that the trips will take. For example, if a trip goes from a suburbto downtown, the model predicts which specific roads are used. The trip assignment process begins byconstructing a network map. The network maps show the possible paths that trips can take. The output of thetrip assignment model shows the paths that include the flow of traffic.The Des Moines Area MPO serves a planning area population of 395,174, from fifteen member cities andportions of three member counties. In 2000, the Des Moines Metropolitan Statistical Area (MSA) consisted ofthree central Iowa counties: Dallas, Polk, and Warren. The release of the 2000 U.S. Census data revealed thattwo additional counties would join the classification of the Des Moines MSA: Madison and Guthrie.The Des Moines Area MPO had completed the development of the travel demand model with a process ofupdating the long-range transportation plan to Year 2030. The Year 2000 was selected as the calibratedmodel base year largely due to the release of the 2000 U.S. Census data, the 2000 CTPP, and the Des MoinesArea MPO's purchase of an add-on survey to the 2001 NHTS.This report has six chapters, including the introduction, and three appendices. The second chapter describesthe model inputs including network, screenlines, TAZ, land use, and NHTS data. The third to fifth chaptersdiscuss the trip generation model, the trip distribution model, and the trip assignment model, successively.Chapter six provides the result of the model validation with the Model Validation and ReasonablenessChecking Manual by Travel Model Improvement Program (TMIP), 2001. Appendices include TransCADmodeling procedures, TAZ data, and trip table. Figure 1 shows interstates, major streets, rivers, parks, and cityboundaries of the Des Moines metropolitan area.February 2006Page 1

DRAFT—FOR REVIEW AND DISCUSSION ONLY2. Model InputsThe two basic components of a travel forecasting model are the transportation network and socioeconomicdata. The transportation network is a special data structure that stores important characteristics oftransportation system and facilities. Socioeconomic data describe population, households, employment, andland use characteristics of the region by transportation analysis zone (TAZ).Highway NetworkThe travel demand network's purpose is to represent the street and highway system operating in the planningarea. The network depicts those streets, generally, that are functionally classified as collector and higher inthe planning area's federal functional classification system. Streets are represented as lines, called links, inthe travel demand network. Centroid connectors are represented on the network, not as links, but asgeneralized connections to the links. Other information about the network's streets and highways isincorporated into the network through the travel demand modeling process. That other information includesnumber of lanes for that link (street); speed associated with that link; length, in miles; capacity; and otheradditional information that may affect a trip along that link (Figure 2). Daily directional capacities at level ofservice (LOS) D with different facility types of Des Moines Area’s travel demand model are shown in Table 1.The location of each node and link is to provide a unique identification consistent with the U.S. State PlaneCoordinates (North America NAD 83, Zone 1402). In order to develop an accurate representation of the majorcorridors within the Des Moines Area MPO boundary, the geographic street files from the Iowa Department ofTransportation (DOT) were used as a base network.Centriods represent the center of activity of a TAZ. They should be located in the center of existingdevelopment for model. They should represent, as closely as possible, local streets within the TAZ, and thenodes connecting them with the roadway network should represent reasonable access points. Zones shouldnot be split by any major physical barriers. The size and density of zones should be corresponded to the levelof detail of the coded highway network.1The Des Moines Area MPO developed a computerized street and highway network to represent existingroadway conditions in the planning area using TransCAD software. Figure 3 shows the travel demand modelnetwork of the Des Moines planning area.Figure 2 Attributes Table of Links1Model Validation and Reasonableness Checking Manual, Travel Model Improvement Program, June 2001February 2006Page 3

The purpose of this report is to describe in detail the trip based travel demand model developed for the Des Moines metropolitan area. Travel demand models are used for simulating current travel conditions and for forecasting future travel patterns and conditions. Once travel demand is known, the planner can assess the 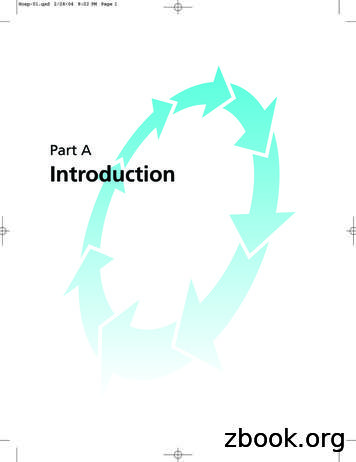 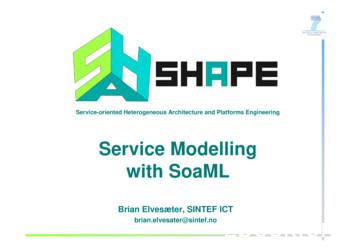 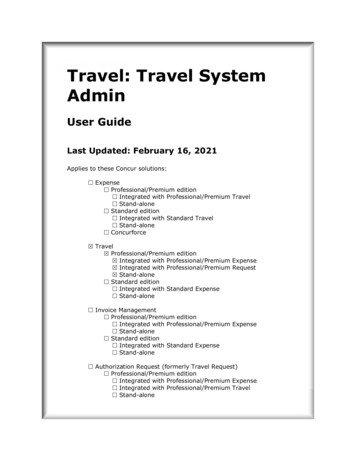 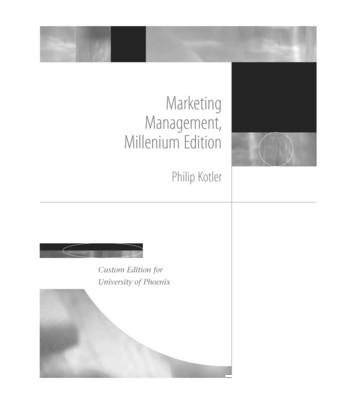 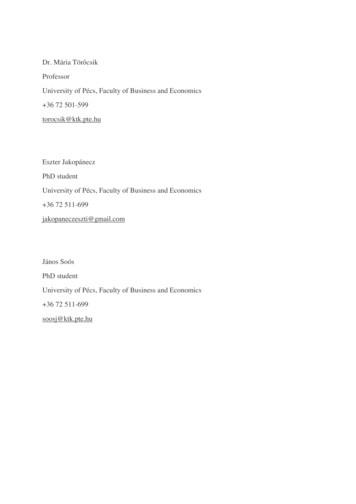 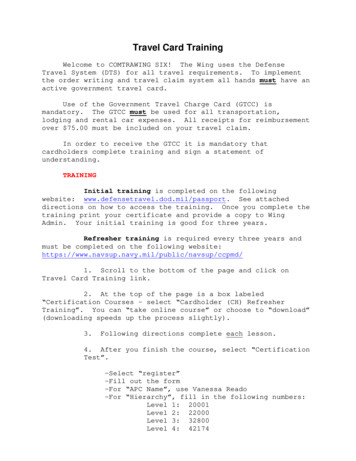 Travel Card Training - Naval Air Training Command
Travel Card Training . Welcome to COMTRAWING SIX! The Wing uses the Defense Travel System (DTS) for all travel requirements. To implement the order writing and travel claim system all hands must have an active government travel card. Use of the Government Travel Charge Card (GTCC) is mandatory. The GTCC must be used for all transportation,
2m ago
5 Views 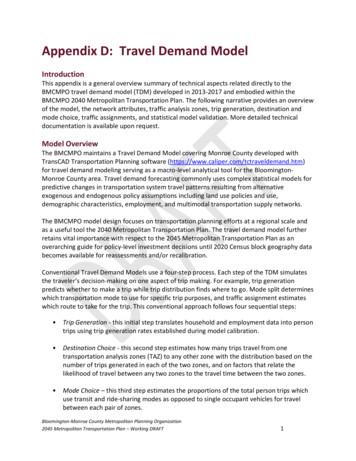 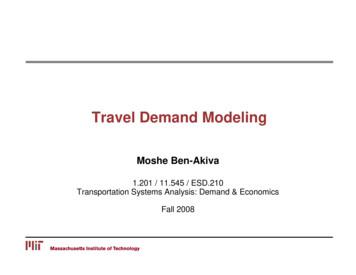 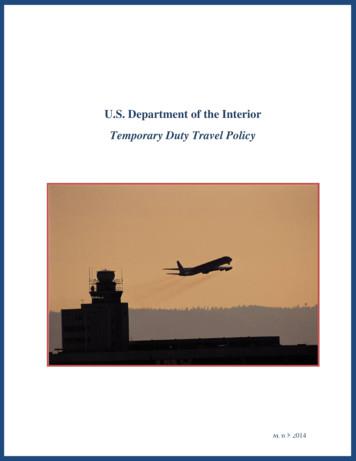 U.S. Department of the Interior Temporary Duty Travel Policy
the DOI PCS Handbook and 347 DM 302, DOI Federal Travel Regulations (FTR) Implementing Instructions. for guidance. Distinguishing Between TDY Travel and Local Travel . The chart below distinguishes between TDY and local travel. Local travelers are not eligible for TDY allowances and may not use ETS to claim reimbursement for travel-related costs.
1m ago
2 Views 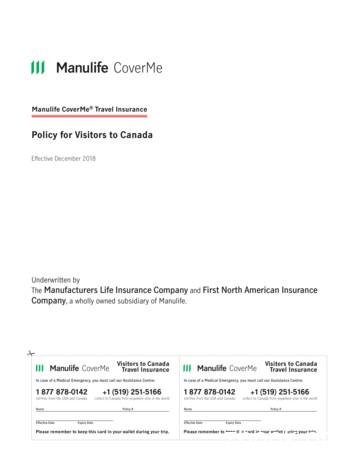 Policy for Visitors to Canada - CoverMe
able to travel with conidence in their travel insurance purchase. Most people travel every day without a problem, but if something does happen, the member companies of the Travel Health Association of Canada (THiA) want you to know your rights. THiA's Travel Insurance Bill of Rights and Responsibilities builds on the golden rules of travel ...
1m ago
3 Views 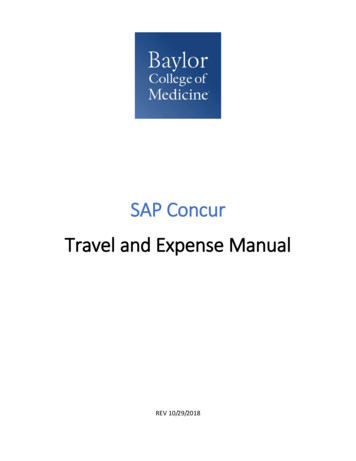 SAP Concur Travel and Expense Manual
To return to your own tasks . 1. Click the user’s name. 2. Then click Done acting for others. Note: The Profile menu now appears. REV 10/29/2018 16 . Submitting a Travel Request Prior to your business trip, submit a travel request for approval. An approved travel request is required for an ... • Travel Start Date • Travel End Date ...
2m ago
6 Views 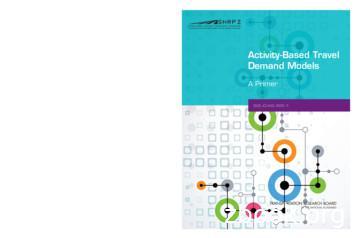