15 AMP15 Amp Plug15 Amp SocketIt is the standard power connector for stage equipment in the UK. Made of three round metal contacts (live,earth, neutral) and contains no fuse, distinguishing it from a standard domestic connector.16 AMP16 Amp Plug16 Amp Socket16 amp connectors, typically blue in colour. Used in some newer installations. Often used to power equipmentthat should not be connected to a dimmer (contains no fuse).5 AMP5 Amp Plug5 Amp Socket5 amp connectors were used prior to 15A, they are a scaled-down version of the 15A connector (contains no fuse).STAGEelectricsBACK TO INDEX3

AMPLIFIERRCF AM2160Yamaha P5000sEquipment which boosts the low voltage signal from microphones, mixing desks or CD players, into a signalwhich is suitable for driving loud speakers. Each speaker in a sound system will normally require its own amplifierchannel and so each amplifier unit will usually contain two channels - for left and right stereo speakers.BIRDIESmall lantern used for lighting in limited spaces and over short distances,such as in a set. These lanterns create a bright, soft-edged light pool.Birdies look like small versions of parcan lanterns, so the light gains itsname from ‘birdie’ - the golfing term for ‘one under par.’James Thomas Par16COLOURED FILTER (OR COLOURED GEL)(AKA Coloured Gel) Coloured light is created from light by filtering out allof the other colours of the spectrum with a sheet of plastic containingcoloured resin inside. Filters slot into the front of a lantern and are heldin place using a frame. There are a number of filter manufacturers andso each colour identified by lighting designers uses a reference numberand name e.g. 002- Rose Pink. Coloured Filters are sometimes known ascoloured gels because originally filters were made of gelatine.Coloured Filter - Lee Short RollsCOMMS(AKA Cans, Talkback) A network of headsets with microphones StageManagers and technical crew wear to talk to with each other during aperformance.Talkback HeadsetSTAGEelectricsBACK TO INDEX4

CUE LIGHTSInterspace OutstationInterspace MasterstationOutstationCue lights are used to give technical staff and actors silent cues. In the UK, flashing red light means ‘stand-by’and green means ‘go.’ The actor or technician acknowledges the cue by pressing a button which makes the redlight stay on constant.CYCStrand Coda 5 4waySelecon PL1CYC2A type of flood light with an asymmetrical reflector which creates a soft and evenly distributed wash ontovertical surface a or cyclorama. They can be positioned on stage, front, rear, overhead or at floor level.CYCLORAMACycloramaCyc (short for cyclorama) is a cloth that is usually hung at the back of the stage. It is normally white so that itcan be lit in different colours.STAGEelectricsBACK TO INDEX5

DIMMERAvolites Art2000Betapack3Dimmers control the amount of electricity reaching the stage light by adjusting power. As the power arrivingfrom the dimmer is decreased, the wattage and intensity of the light reduces.DMXDMX - 3 pin CableDMX - 5 pin CableDMX is a standard defining a binary control signal used to send commands to various pieces of stageequipment, the majority of which are associated with lighting. Each piece of equipment carries a uniqueaddress and receives commands such as turn on, move left etc. The latest development is RDM this allowstwo directional signal enabling information to be sent back from the unit to confirm that commands has beencarried out.FLOODA lensless lantern with a fixed beam. Flood lights come in two types;symmetrical reflector and asymmetrical reflector. Symmetrical reflectorsgive a soft-edged wash of light and can be used for overhead washesor at stage level. Asymmetrical reflectors give a soft wash of light onvertical surfaces. They can be used to light cyclorama cloths and can bepositioned overhead or at floor level.Selecon LuiSTAGEelectricsBACK TO INDEX6

FOLLOW SPOTChauvet LED with standChauvet LEDRobert Juliat BuxiePowerful profile lantern, typically stand mounted, which can be easily moved to follow people on stage.Followspots come with their own dimmer, colour magazine, iris and shutters, which are controlled by anoperator. Powerful followspots cannot be dimmed, so have mechanical dimming shutters attached to controlthe light output.FRESNELStrand Quartet FresnelSelecon Rama FresnelA lantern fixture with a concentric stepped lens, to achieve a longer focal length. Fresnel lights create a softedged beam of light with a beam angle between 5 and 60 . These are often used with barndoors which controlthe light spill by closing the beam off. They were invented by Augustin Jean Fresnel in the 17th Century and weredesigned to be used on the lighthouses to cast light as far as possible out to sea.GOBOA thin steel disc with a pattern etched through it or a glass disc withpatterns and/or colours printed on to it. They are designed to project anendless variety of patterns and images onto the stage. For example, goboscan create the appearance of foliage, windows, cityscapes and more.Gobos are placed in a profile spot and the lenses are then used to focusthe image. GOBO stands for Graphical Optical Black Out.Two GOBOs, a window and a leaf patternSTAGEelectricsBACK TO INDEX7

HAZERA unit which creates a non-toxic fog and works in a similar way to smokemachines. Hazes are different because they produce less smoke and aremore like an atmosphere haze. They are used by lighting designers toreveal/define light beams.LeMaitre Neutron XSLED LIGHTSLED stands for ‘Light Emitting Diodes’. These offer a low energy stage lightingsource. They come in a range of fixtures and luminaries including strip lights,moving lights, light walls, blocks, profile spots and cyc lights. Most have theability to create colour without the use of gel.LED Lights - Chauvet Slim Par 64LIGHTING BAR(AKA IWB) An internally wired bar typically installedoverhead at a high level for hanging stage lanternsfrom and distributing power and data.6 way Internally Wired Bar (IWB) with 6 Par CansSTAGEelectricsBACK TO INDEX8

LIGHTING DESKJuggler 12-24 (Manual)Avolites Pearl Tiger Touch II (Memory)The main method of controlling stage lighting. At its simplest level a manual desk will use faders to tell thedimmer to adjust the voltage, controlling the intesity of the light. The next level adds memory to record andplayback lighting scenes easily. Beyond this are complex computerised lighting consoles that record andplayback the thousands of lighting states needed for a major performance.LIGHTING STENCILLighting stencil 1-50Lighting stencil 1-25Lighting stencils contain symbols that make up the visual shorthand lighting designers use to mark the positionof lights in designs. The images are variations of the shapes of the main stage lantern types.MICROPHONESennheiser e604Audio Technica AT897Shure SM58A device which converts acoustic sound waves into an electrical signal. These signals are typically very lowso microphones need to be amplified on a mixing desk to line level and then it can be amplified further forperformance or to be recorded. The three most common forms of microphone are dynamic, condenser andribbon, with each having their own applications in live and studio environments.STAGEelectricsBACK TO INDEX9

PATCHINGAvolites 48way Dimmer RackCord Patch bayAvolites Dimmer Mains Patch (DMP) LeadMains PatchingA method which allows lighting technicians to cross-connect light circuits to dimmers. Traditionally this was doneat the dimmer, where the electrical circuits were patched into the chosen dimmer.Soft PatchA digital way of assigning control channels on a lighting desk to dimmers, moving lights and other DMX devices.PLOTA plot is the plan for the technical elements of a performance. They are recorded cue by cue and scene by scene,for all lighting, sound, set and special effects adjustments.POWERCONPower InPower OutA ‘keyed’ power connector (rated at 20 amps) used on patch panels, fixtures and an increasing variety of equipment asit is smaller than a standard 15 amp connector. The blue connector is the power inlet and the grey connector is thepower outlet.STAGEelectricsBACK TO INDEX11

PROFILEETC Source Four JuniorZoom 25-50ETC Source4 36degA lantern that creates a hard edged adjustable beam of light. Used to light performers and project GOBOs.RADIO MICROPHONE(AKA wireless microphone) A microphone head attached to a radiotransmitter pack with batteries and aerial. The mains powered receiverpicks up the signal, which is then sent to a mixing desk.Lavalier - Sennheiser ew112SCAFF BARA 48mm diameter piece of barrel pipe, often made from aluminium andused extensively with scaffolding connectors to form part of a largerstructure. They are used for hanging lighting and stage equipmentbackstage or above the stage.Scaff BarSMOKE MACHINE(AKA: Fogger) A unit which creates a white non-toxic fog byvaporization of smoke fluid. Used for special effects on stage.Jem ZR44STAGEelectricsBACK TO INDEX12

SPECIALSMirrorball (AKA - Glitterball, Discoball)A ball covered in mirrors, which hangs above stage or in the middle of aroom to create a decorative lighting effect when light is shone on to it.Mirrorballs are popular in discotheques and ballrooms.MirrorballChauvet LED TechnostrobeMartin Atomic 3000StrobeGives off a series of intense pulses of light at fast, regular intervals. The speed of flashes can be adjustedremotely. Fast flashes can cause epileptic fits in susceptible people, so care must be taken when used inperformance.Pyro - LeMaitre GerbPyro - LeMaitre PyroflashPyro (Pyrotechnics)Theatrical fireworks suitable for indoor use including theatrical flashes, coloured smoke, silver jets, confetti,glitter and maroons.STAGEelectricsBACK TO INDEX13

STANDSWind up standPush up standA vertical structure with a tripod base, used to support lights, speakers and other equipment.TANK TRAP(AKA Boom Base) a heavy base with vertical scaffold tube adaptor, usedas a base for lighting booms.Doughty Tank TrapTRUSSINGProlyte H30V1000Prolyte X30D1000A welded framework of alloy bars and bracing designed to provide a strong and secure structure for hangingequipment.STAGEelectricsBACK TO INDEX15

XLR3 pin Audio XLR Socket3 pin Sound XLR Plug5 pin lighting XLR Plug5 pin lighting XLR Socket(AKA ‘Cannons’ after a manufacturer of XLR connectors) a type of connector used in stage lighting and sound.Circular in design, these cables can have between three and seven pins. Most commonly used as three pin forsound and five pin for DMX (although three pin is also used for DMX).STAGEelectricsBACK TO INDEX16 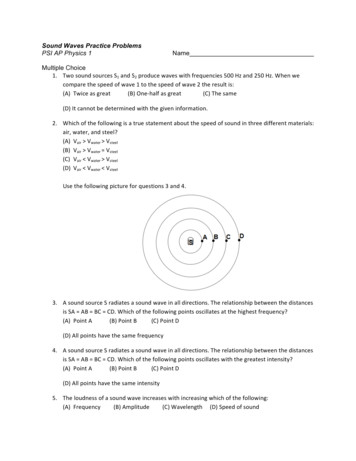 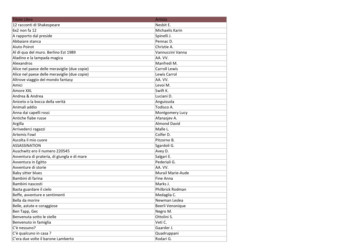 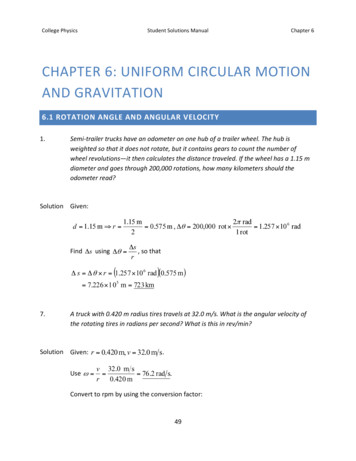 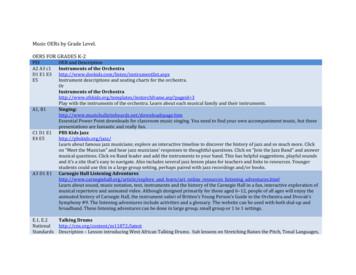 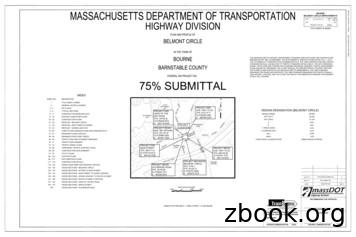 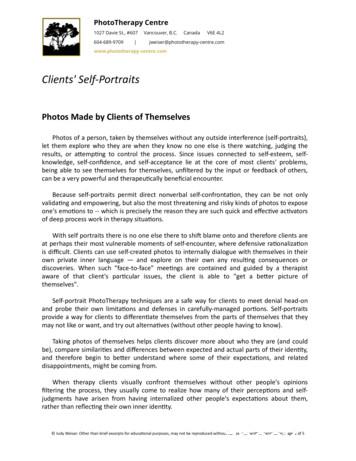 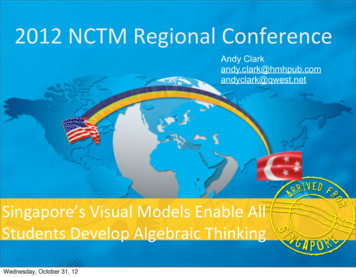 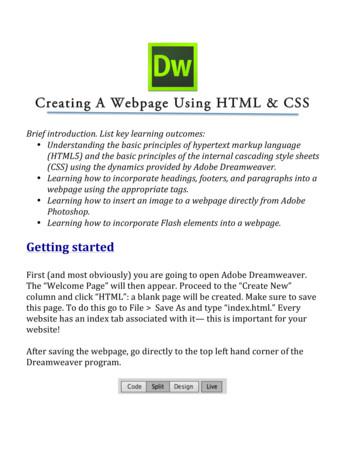 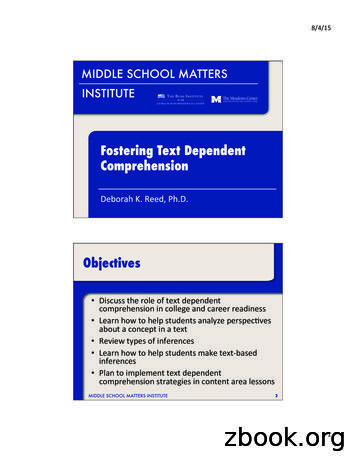 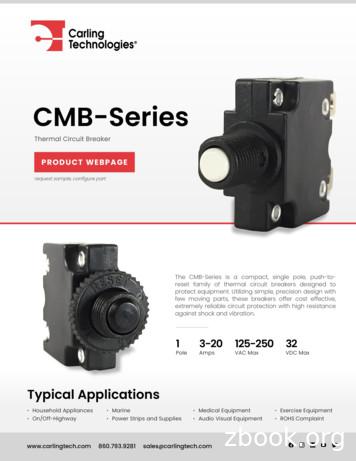