A Structurational Perspective On Leadership In Virtual Teams 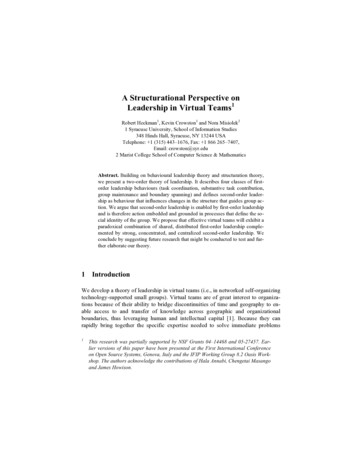 A Structurational Perspective onLeadership in Virtual Teams1Robert Heckman1, Kevin Crowston1 and Nora Misiolek21 Syracuse University, School of Information Studies348 Hinds Hall, Syracuse, NY 13244 USATelephone: 1 (315) 443–1676, Fax: 1 866 265–7407,Email: [email protected] Marist College School of Computer Science & MathematicsAbstract. Building on behavioural leadership theory and structuration theory,we present a two-order theory of leadership. It describes four classes of firstorder leadership behaviours (task coordination, substantive task contribution,group maintenance and boundary spanning) and defines second-order leadership as behaviour that influences changes in the structure that guides group action. We argue that second-order leadership is enabled by first-order leadershipand is therefore action embedded and grounded in processes that define the social identity of the group. We propose that effective virtual teams will exhibit aparadoxical combination of shared, distributed first-order leadership complemented by strong, concentrated, and centralized second-order leadership. Weconclude by suggesting future research that might be conducted to test and further elaborate our theory.1IntroductionWe develop a theory of leadership in virtual teams (i.e., in networked self-organizingtechnology-supported small groups). Virtual teams are of great interest to organizations because of their ability to bridge discontinuities of time and geography to enable access to and transfer of knowledge across geographic and organizationalboundaries, thus leveraging human and intellectual capital [1]. Because they canrapidly bring together the specific expertise needed to solve immediate problems1This research was partially supported by NSF Grants 04–14468 and 05-27457. Earlier versions of this paper have been presented at the First International Conferenceon Open Source Systems, Genova, Italy and the IFIP Working Group 8.2 Oasis Workshop. The authors acknowledge the contributions of Hala Annabi, Chengetai Masangoand James Howison.

2Robert Heckman1, Kevin Crowston1 and Nora Misiolek2regardless of geographical location, virtual teams also permit organizations to respond quickly to unexpected changes in the environment and to non-routine problems. As a result, virtual teams are an increasingly important part of the adaptivecapability of an organization to respond to uncertainty and complexity.Unfortunately, as teams broaden in scope and membership they become increasingly difficult to manage. In particular, members of virtual teams may come from avariety of organizations or sub-organizations; rather than being assigned to the teamby a common manager, members often voluntarily choose to participate. As a result,these teams are often self-organizing, that is, they are characterized as having a “highdegree of decision-making and autonomy and behavioural control at the work grouplevel (such that) a much greater emphasis is placed on control from within ratherthan outside the group” [2]. A particularly important example of self-organizingteams are those created in the context of inter-organizational alliances where members come from different organizations but there is no dominant partner to impose astructure. Indeed, participants in virtual teams may represent no organization at all,as is often the case in Internet-enabled collaborations such as Wikipedia andFree/Libre Open Source Software (FLOSS) development teams. As organizationsbecome increasingly knowledge-based and dependent on effective coordination ofspecialized knowledge for competitive advantage, teams in general, and these sortsof virtual teams in particular, grow in importance.The primary contribution of this paper is to develop a set of theoretical propositions about the nature of emergent leadership in virtual teams based on behavioralleadership theory and structuration theory. We further develop these propositions byconsidering how structure can be instantiated in shared mental models and the specific behaviors that contribute to building such models. Finally, because there areinteresting suggestions that can be gleaned from the nascent literature on leadershipin virtual teams, we present propositions about patterns of emergent leadership thatseem likely to be more effective. We focus on leadership in virtual teams for tworeasons: the high level of discontinuities in virtual teams seems to pose particularchallenges for leadership, and, as we discuss in our literature review, existing theories of group leadership do not seem to fully account for the leadership dynamicsfound in such teams. In the remainder of this subsection we describe these two problems in more detail.First, Watson-Manheim, Chudoba & Crowston [3] suggest that virtual work ischaracterized by numerous discontinuities, defined as a lack of coherence in someaspects of the work setting. Discontinuities are created and/or exacerbated by thespecific features of virtual teams: often fluid organizational membership, minimizedorganizational context, lack of face-to-face communication, reliance on asynchronous communication, and lack of formal status cues. These discontinuities are problematic for virtual teams because they hinder team members’ abilities to make senseof the shared task and of communications from others, or they produce unintendedinformation filtering or misunderstandings [4]. The separation between membersmay ultimately result in an ineffective team [5, 6]. Researchers have suggested thatteam leadership is key to helping team members overcome these barriers to performance [7, 8].Second, the nature of leadership in virtual teams does not seem to be adequatelydescribed by current theories of leadership, as we will discuss in more detail in the

A Structurational Perspective on Leadership in Virtual Teams3literature review. In the absence of formally designated leaders, members within theteam lead on a “voluntary” basis, either individually or collectively. In these circumstances, leadership is said to be emergent. According to Berdahl [9], leaders emergewhen “one or more of a group composed initially of equal status peers exhibitsnotably higher levels of leadership behaviour and thereby attains higher status in theeyes of fellow group members.”. Some virtual teams will evolve a leadership structure in which a single member emerges and is recognized by other members as theteam’s leader, while other teams will evolve a less-centralized leadership structurebased on interaction and influence patterns. In the second kind of team, a very different form of leadership seems to be at work. No single individual plays an obviouslydominant role. When asked who their leaders are, members of these teams will oftensay, “We have no leaders.” If members of a team claim to have no leaders, is it accurate to say that the team has no leadership? Such situations pose several problems formost traditional conceptions of leadership, which is the second motivation for ourpaper. We argue that leadership is indeed at work in these situations, but in a formthat must be looked at differently than as presented by most current theories of leadership.In the following sections of this paper, we first introduce the two building blocksof our theorizing, leadership theory and structuration theory. We then develop a theory of emergent leadership behaviors in virtual teams. Our focus on emergent leadership leads us to try to characterize the process of emergence rather than to develop astatic picture of leadership characteristics. The main contribution of our paper is theintegration of various social theories to develop theoretical propositions about emergent leadership in virtual teams and, secondarily, of what patterns of leadership seemto be most effective. Our paper thus provides direction for future research by suggesting what concepts and relationships to study and what kinds of data to collect.We conclude by describing directions for future research to test or further refine andextend our theory.2Theory ReviewIn this section, we review research on emergent leadership in virtual teams, identifythe problems these teams pose for existing theories of leadership, and suggest adopting a behavioral perspective on leadership.2.1Leadership TheoryAs noted above, the presence of discontinuities in virtual teams suggests that teamleadership may play a particularly crucial role in enabling team effectiveness. Leadership has been the topic of extensive research in the general management literature[10, 11]. It is impossible to do justice to this voluminous literature in this paper, soour review is necessarily focused on those theories that are most applicable to oursetting. Specifically, we consider only tangentially the preponderance of the literature that focuses on leadership within formal organizational hierarchies, because thenascent literature on leadership in virtual teams [7, 8, 12] suggests that this setting

4Robert Heckman1, Kevin Crowston1 and Nora Misiolek2differs fundamentally from leadership in virtual teams. Instead we focus on twostreams of research that address in part the phenomenon of “leaderless” teams:(1) leadership in self-managing teams and shared leadership, informed by functionalbehavioral leadership theory, and (2) the emerging literature on leadership in virtualteams. These views of leadership depart from much of “traditional” leadership theory(e.g., trait theory, contingency and situational leadership theories, social exchangeand strategic contingencies theory, and leader-member exchange theories) in theirbasic assumptions about the nature of leaders. Specifically, these views acknowledgethat leadership can be shared among team members and that more than one leadercan emerge during the course of a team’s interactions, rather than restricting attention to formal leadership within organizational hierarchies. In the remainder of thissection, we briefly review these theories as background to our own theorizing.Shared leadership in self-managing teams. We draw first on the concept ofshared leadership, which is defined as:A dynamic, interactive process among individuals in groups for which the objectiveis to lead one another to the achievement of group or organizational goals or both (that) often involves peer, or lateral, influence and at other times involved upward ordownward hierarchical influence [13].This perspective, similar to the notion of distributed leadership [14], conceptualizesleadership in terms of relational processes and interdependencies among social networks or networks of influence [15]. It differs from conventional leadership theoryby conceptualizing leadership as a group-level rather than an individual-level phenomenon. Shared leadership suggests that it is unlikely that a “single multi-roleleader” will emerge. Decades of research on small team interactions supports thenotion that different individuals perform different leadership roles as circumstanceswarrant. For example, Houghton and colleagues [16] observe that when the taskoriented and social supportive-oriented leadership roles in small teams have beenexamined empirically, these leadership roles are often split between two or moreindividuals. As a result, our research will consider that leadership may be sharedrather than the responsibility of a single individual.Misiolek & Heckman [17] found it useful to distinguish between two types oftask roles, task coordination and substantive task contribution. Task coordinationbehaviors are those involved in organizing and directing the team’s work (e.g.,scheduling, dividing labor, creating processes) while substantive task contributionsare those that actually accomplish the team’s work (e.g., idea generation, evaluation,synthesis) Thus, leaders may exercise their influence by means of their substantiveexpertise as well as through their coordinating and directing activities. Finally, inaddition to the task and leadership functions which leadership must satisfy, Anconaand Caldwell [18] argued that there are also leadership functions involved withmaintaining relations with individuals and groups outside the team, which theycalled boundary spanning.Leadership in virtual teams. The nascent literature on leadership in virtual teamsdoes provide some insights into the behavioral nature of leadership in these teams,and it has considered issues including leadership structure, initiation behavior, andcommunication quantity and content. Leadership structure. In the absence of a formal or appointed leader, the literature suggests that different leadership structures evolve within virtual teams [17,

Perspective Drawing WORKSHEET
PERSPECTIVE : Perspective is used by artists to create the illusion of depth and distance in a painting or drawing. Creating 3D effects on a 2D surface like paper, wood, wall space or canvas is made possible with the use of perspective. Urban artists make strong use of perspective in their lettering and illustrations.
7m ago
30 Views