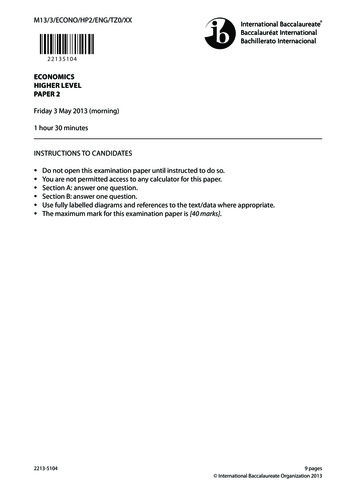 M13/3/ECONO/HP2/ENG/TZ0/XX22135104ECONOMICSHigher levelPAPER 2Friday 3 May 2013 (morning)1 hour 30 minutesINSTRUCTIONS to candidates Do not open this examination paper until instructed to do so.You are not permitted access to any calculator for this paper.Section A: answer one question.Section B: answer one question.Use fully labelled diagrams and references to the text/data where appropriate.The maximum mark for this examination paper is [40 marks].2213-51049 pages International Baccalaureate Organization 2013

M13/3/ECONO/HP2/ENG/TZ0/XX–2–SECTION AAnswer one question from this section.1.Study the extract below and answer the questions that follow.Rising peso hits Filipinos abroad The Philippine peso has risen sharply against the United States (US) dollar recently, which isbad news for Filipinos working overseas who regularly send home a portion of their earnings(known as remittances) to support their families. For those working in the US and in countrieswhich peg their currencies to the US dollar, the effect on their remittances is becomingmore severe. One example is Hong Kong, where around 140 000 Filipinos work. Apart from a weaker US dollar, the Philippine peso has also been boosted by increasedremittances – which hit a record US 17 billion last year – and an increase in foreign investmentin the Philippine stock market. Its main index has risen 40 % this year, supported by globalcapital flows into Asia’s emerging markets and optimism over the new government inthe country. The Philippine president has voiced concern over the impact of the Philippinepeso’s sharp appreciation on overseas workers and the country’s export sector. Recently, the US dollar fell below 43 Philippine pesos, while 41 Philippine pesos is predictedby the end of 2010. A business leader said: “There is now a lot of worry over the rising pesoamong overseas Filipino workers. The Philippine peso may soon rise to a point at which it isno longer worthwhile for Filipinos in low-wage jobs to continue working abroad”. In previous times of currency instability, Filipinos tended not to reduce their remittances totheir families, who depend on them, but absorbed the losses themselves. For that reason,the strong exchange rate is not expected to cause a fall in remittances, which are vital forthe Philippine economy as they finance, among other things, spending on consumer goodsand construction. In all, remittances account for over a tenth of the country’s grossnational income. Officials expect remittance growth of 8 % this year, a reflection partly ofmore Filipinos working in higher-paid skilled and professional jobs abroad. The Philippine central bank, meanwhile, is trying to slow the currency’s advance by purchasingUS dollars on the currency market, but this is a costly exercise for a less-developed country.Despite this, the Philippine peso is set to rise further.[Source: adapted from The Straits Times, 5 November 2010](This question continues on the following page)2213-5104

–3–M13/3/ECONO/HP2/ENG/TZ0/XX(Question 1 continued)(i)Define the term appreciation indicated in bold in the text (paragraph ).[2 marks](ii)Define the term exchange rate indicated in bold in the text (paragraph ).[2 marks]Using a diagram, explain how the “increase in foreign investment in thePhilippine stock market” has affected the value of the Philippine peso(paragraph ).[4 marks](c)Using an AD/AS diagram, explain how the Philippine peso remittances affectthe national output of the Philippine economy.[4 marks](d)Using information from the text/data and your knowledge of economics,discuss the likely impact of an appreciating currency on the performance of thePhilippine economy.[8 marks](a)(b)2213-5104Turn over

M13/3/ECONO/HP2/ENG/TZ0/XX–4–2.Study the extract below and answer the questions that follow.India-Malaysia trade agreement to double trade by 2015 An India-Malaysia trade agreement is expected to almost double trade between thetwo countries by 2015, allowing the two nations to reduce dependence on traditional tradepartners such as China and the United States. The preferential trade agreement will be signedby 31 January 2011 and come into force six months later. The agreement is predicted to increasethe level of trade to US 15 billion by 2015. The deal will further strengthen trade ties between India and Malaysia. Malaysia is India’s19th largest trading partner, with bilateral trade totaling US 6.5 billion between January andAugust 2010 after growing at an average of 14.9 % between 2004 and 2009. The deal willsupport a trade pact that came into effect in January 2010 between India and the 10-memberAssociation of Southeast Asian Nations (ASEAN)*, which became a free trade area in 2003.However, this agreement between India and Malaysia will be more extensive, covering services,investments, trade protection and other areas. Malaysia exports electrical and electronic products, crude petroleum, palm oil and chemicalgoods to India, its main export destination in South Asia. However, some tariffs have beenimposed by India on these products. India, meanwhile, has invested US 1.11 billion innearly 100 manufacturing projects in Malaysia. Malaysia and India will also bolster defencecooperation through frequent talks between their defence ministers, senior officials and chiefsof the armed services, according to a joint statement.[Source: All rights reserved. Republication or redistribution of Thomson Reuters content, including by framing or similar means, isprohibited without the prior written consent of Thomson Reuters. Thomson Reuters and its logo are registered trademarks or trademarksof the Thomson Reuters group of companies around the world. 2010 Thomson Reuters. Thomson Reuters journalists are subject to anEditorial Handbook, which requires fair presentation and disclosure of relevant interests.]*ASEAN: is a free trade area comprising Brunei Darussalan, Cambodia, Indonesia, Laos,Malaysia, Myanmar, Philippines, Singapore, Thailand and Vietnam.(This question continues on the following page)2213-5104

–5–M13/3/ECONO/HP2/ENG/TZ0/XX(Question 2 continued)(a)(i)(ii)Define the term preferential trade agreement indicated in bold in the text(paragraph ).[2 marks]State two examples of trade protection (paragraph ).[2 marks](b)Using an appropriate diagram, explain the effect on Malaysian palm oil producersof the tariffs imposed by India (paragraph ).[4 marks](c)Distinguish between a free trade area (such as ASEAN), a customs union anda common market.[4 marks](d)Using information from the text/data and your knowledge of economics,evaluate the possible effects of this agreement on trade between Indiaand Malaysia.[8 marks]2213-5104Turn over

M13/3/ECONO/HP2/ENG/TZ0/XX–6–SECTION BAnswer one question from this section.3.Study the extract below and answer the questions that follow.China: Money to invest for a better future In 2005, Madam Xiao Jinqiu was barely making enough to feed her two sons. Now she earns aliving by weaving traditional fabrics, bags and scarves for sale and rearing livestock – all withthe help of an annual micro-loan given out by a local non-profit group. By borrowing between 1000 yuan and 3000 yuan (US 152 and US 456 respectively) a year,she has been able to earn enough to invest in a better life for her family. She is among a growingnumber of poor villagers in China who have found a lifeline in micro-credit, which allowsfamilies the opportunity to escape from the poverty trap. Such schemes have existed in Chinafor some years, but the number of borrowers remains low. China’s state banks are now trying to offer its 720 million rural residents more access tomicro-credit, but two key barriers still stand in the way. Many remote areas remain inaccessibleto banks and farmers often do not have belongings or assets that can be used as security forthe loans. Almost 3000 rural townships in China – around 9 % of the country’s total – do nothave a bank. This is where private banks and non-profit groups can make a difference. Almost half of the 170 000 population of Yunnan Province lives under China’s poverty lineof 1196 yuan per capita annually. Almost 36 million of China’s rural residents, or 3.6 %of the population in the countryside, were living below the poverty line at the end of 2009,according to official data. Micro-credit is still rare in China, but it is a very effective way to reduce poverty. The key is tofind a way to establish trust between lender and farmer. China’s farmers do not own the landthey cultivate. They have only land-use rights, which means that they cannot use the land theyfarm as security for a loan. One solution to this problem is to group several farming families together and make themco-guarantors of one another’s loans, spreading the risk. An official from one lendingorganization, which lends only to married women, said: “Women are less likely to default.They take charge of household finances. They have self-respect”.[Source: The Straits Times, 15 November 2010](This question continues on the following page)2213-5104

–7–M13/3/ECONO/HP2/ENG/TZ0/XX(Question 3 continued)(i)Define the term micro-credit indicated in bold in the text (paragraph ).[2 marks](ii)Define the term poverty trap indicated in bold in the text (paragraph ).[2 marks](a)(b)Using a diagram, explain how the use of micro-credit might affect thedistribution of income in rural areas of China.[4 marks](c)Using a production possibility curve (PPC) diagram, explain howmicro-credit schemes can affect the actual output and the productionpossibilities of an economy.[4 marks]Using information from the text/data and your knowledge of economics,evaluate the use of micro-credit in promoting economic development ineconomically less-developed countries.[8 marks](d)2213-5104Turn over

M13/3/ECONO/HP2/ENG/TZ0/XX–8–4.Study the extract and data below and answer the questions that follow.Cambodia encouraged to review international partnerships The United States (US) Secretary of State has urged Cambodians to pursue a variety ofeconomic partnerships throughout Asia-Pacific and not become over-reliant on China.She said that Cambodia should look for partnerships that cut across regional geographic lines. Both China and the US are working to extend their influence in Cambodia. Nearly 400 Chinesecompanies have invested billions of dollars in Cambodia, including key infrastructureprojects such as hydropower dams and coal-power plants. While acknowledging theattraction of Chinese investment, the Secretary of State said: “One of the challenges forCambodia is the construction of dams on the Upper Mekong river”. China has been criticisedby environmental groups over the building of a series of hydropower projects on theMekong river. Concerns over the project include a possible loss of water quality and a lossof biodiversity. The Secretary of State also indicated that the US was willing to cooperate with Cambodia toresolve an outstanding debt of about US 445 million that the country owes to the US. The Cambodian Foreign Minister had asked the Secretary of State at a meeting to helphis country convert the debt into development aid. She said she was ready to explorecreative ways Cambodia could be relieved of the debt, possibly by agreeing to preserve keyenvironmental areas or investing in education. In this way, the debt repayment would be treatedas development aid.[Source: AFP 2010]Human Development Report 2010 Statistics for at birth38.752.655.656.257.660.162.7Expectedyears ofschooling6.16.16.16.57.59.79.8Mean yearsof schooling5.05.25.35.55.75.75.8GNI per capita(Constant 2005PPP US )———79397513901753HDI value———0.4070.4380.4910.518[Source: pdf2011 Human Development Report, United Nations Development Programme.](This question continues on the following page)2213-5104

–9–M13/3/ECONO/HP2/ENG/TZ0/XX(Question 4 continued)(a)(i)(ii)Define the term infrastructure indicated in bold in the text (paragraph ).[2 marks]State two forms of development aid (paragraph ).[2 marks](b)Using an appropriate diagram, explain why hydropower dam projects on theMekong River might lead to market failure.[4 marks](c)Explain why the Human Development Index (HDI) is considered a bettermeasure of economic development than GNI.[4 marks](d)Using information from the text/data and your knowledge of economics,discuss the possible effects on the economic development of Cambodia ofinvestment from China and the United States (US).[8 marks]2213-5104 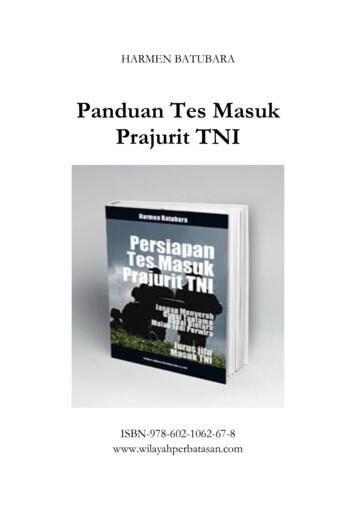 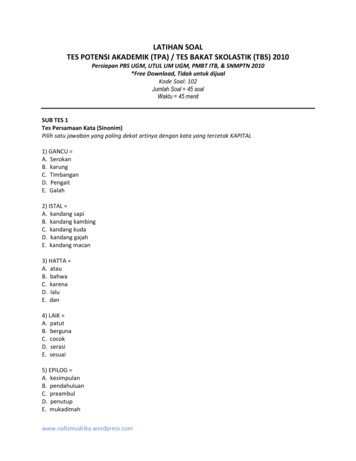 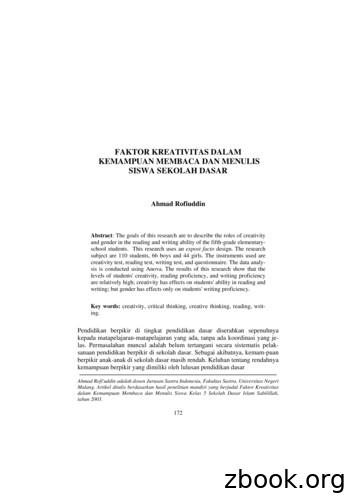 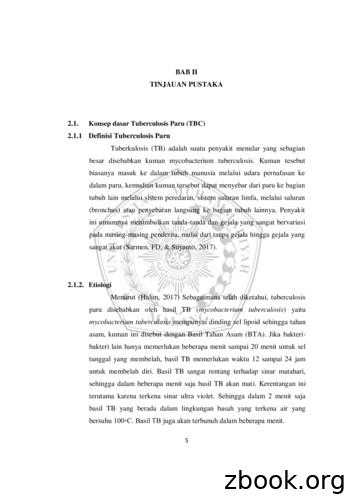 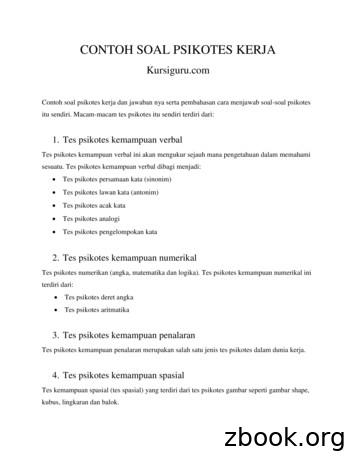 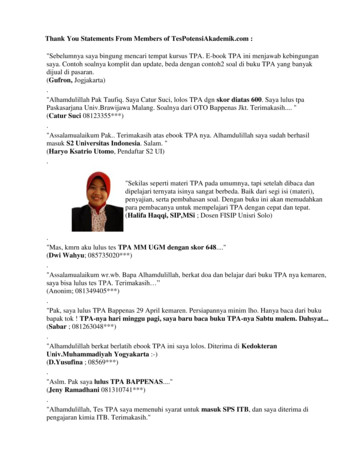 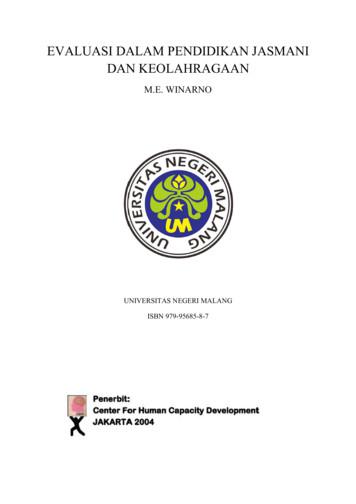 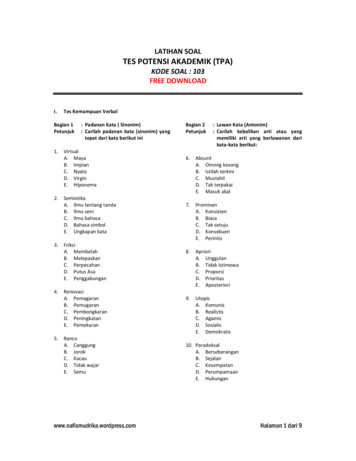 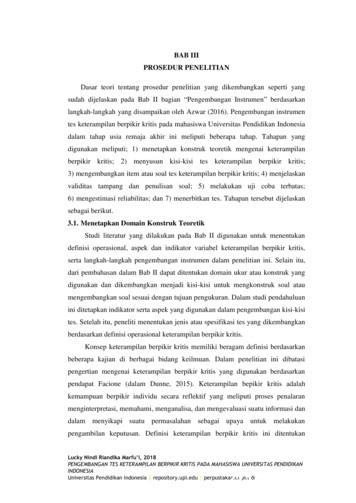 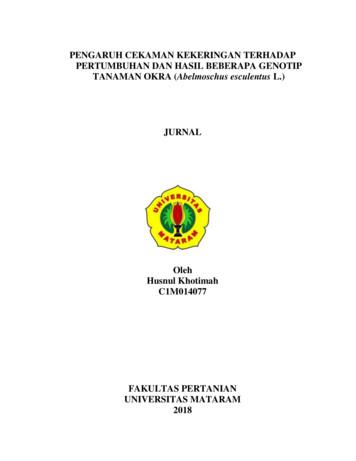 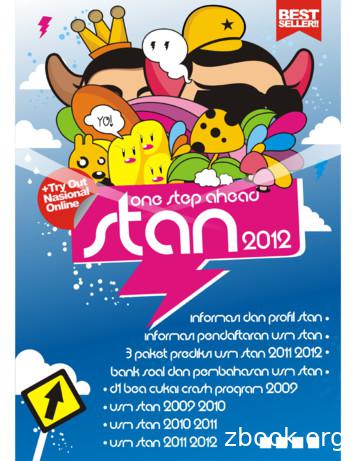 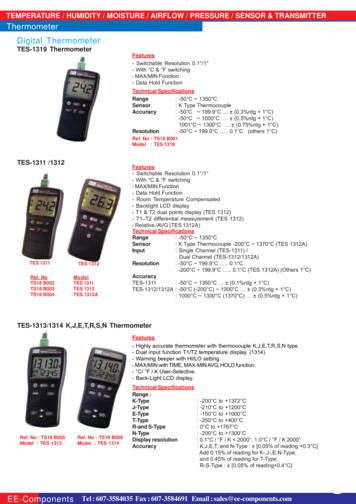