AMINES - The Maths And Science Tutor 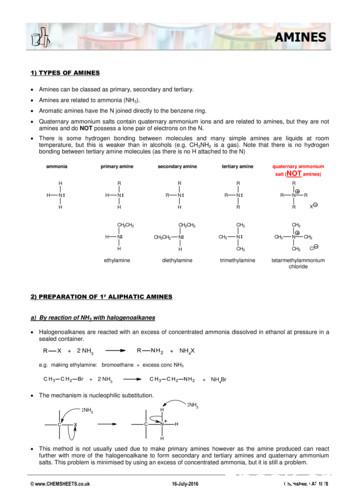 AMINES1) TYPES OF AMINES Amines can be classed as primary, secondary and tertiary. Amines are related to ammonia (NH3). Aromatic amines have the N joined directly to the benzene ring. Quaternary ammonium salts contain quaternary ammonium ions and are related to amines, but they are notamines and do NOT possess a lone pair of electrons on the N. There is some hydrogen bonding between molecules and many simple amines are liquids at roomtemperature, but this is weaker than in alcohols (e.g. CH3NH2 is a gas). Note that there is no hydrogenbonding between tertiary amine molecules (as there is no H attached to the N)ammoniaprimary aminesecondary aminetertiary aminequaternary ammoniumsalt (NOT H3NCH3RXCH3Cltetarmethylammoniumchloride2) PREPARATION OF 1y ALIPHATIC AMINESa) By reaction of NH3 with halogenoalkanes Halogenoalkanes are reacted with an excess of concentrated ammonia dissolved in ethanol at pressure in asealed container. 2 NH3 NH4Xe.g. making ethylamine: bromoethane excess conc NH3 2 NH3 NH4Br The mechanism is nucleophilic substitution.: NH3: NH3 This method is not usually used due to make primary amines however as the amine produced can reactfurther with more of the halogenoalkane to form secondary and tertiary amines and quaternary ammoniumsalts. This problem is minimised by using an excess of concentrated ammonia, but it is still a problem. www.CHEMSHEETS.co.uk16-July-2016Chemsheets A2 1078

b) By reduction of nitrile compounds This is the commonest way as it only forms one amine rather than a mixture. It is done in two steps. Note that the product has one more C atom than the starting material.w arm ethanol1) Formation of a nitrile from ahalogenoalkane KCN KXLiAlH4 in2) Reduction of the nitrile toform an amineethoxyethane 4 [H]ORNi catalystheat 2 H2e.g. making ethylaminestep 1step 2 KCN KBr4 [H]TASK 1 – Give two synthetic paths to making butylamine.Give equations for all reactions.Route 1Route 2 www.CHEMSHEETS.co.uk16-July-2016Chemsheets A2 1078

3) PREPARATION OF 1y AROMATIC AMINES These are usually prepared by the reduction of nitro compounds using tin and concentrated hydrochloric acid. (this wouldactually form the ammonium salt and so NaOH is added to give the amine).Sn HClfollow ed by NaOH 6 [H]2 H2O4) BASE STRENGTH OF AMINES Amines are Brønsted-Lowry bases (proton acceptors).They are weak bases, and act as bases because the lone pair on the N atom can readily accept a proton.RHN H 2OHHTASK 2–R N H OH-HWrite equations for the following reactions of amines as bases. Show the structure of all organicsubstances1) Methylamine nitric acid2) Diethylamine sulfuric acid www.CHEMSHEETS.co.uk16-July-2016Chemsheets A2 1078

5) NUCLEOPHILIC SUBSTITUTION REACTIONS NH3 reacts with halogenoalkanes to form 1 amines initially. The overall reaction is nucleophilic substitution, with ammonia acting as a nucleophile through the lone pair on the Natom attacking the electron deficient C atom of the C-halogen bond.y 2 NH3Overall equation NH4X: NH3Mechanism: NH3 However, as well as ammonia, the amines produced also have a lone pair on the N atom, so they can react withhalogenoalkanes. (in fact, the product has a greater electron density on the N lone pair and is even better at reactingwith halogenoalkane than the original molecule). This means that the H's on the N can be successively replaced by the R group from the haloalkanes, right through toquaternary ammonium salts.HRRXHNHRRRXHNHRXRNRHRRXNRRNRRX This greatly complicates the reaction, because any amine produced in such a reaction can react with more haloalkaneand undergo further substitution. Due to the problems of further substitution in this reaction, it is not often used to prepare amines, as a mixture of aminesand ammonium salts is produced which would have to separated. However, if a large excess of ammonia is used, then a 1 amine is the main product. Similarly, if a large excess of the haloalkane is used, then the 4 ammonium salt is the main product.yyTASK 4– Give two synthetic paths to making butylamine. Give equations for all reactions.1)Draw the structure of and name the main organic product when ethylamine reacts with a large excess ofchloromethane.2)Draw the structure of and name the main organic product when a large excess of propylamine reacts with achloromethane. www.CHEMSHEETS.co.uk16-July-2016Chemsheets A2 1078

3) a) Draw the structure of and name the organic products formed when methylamine reacts with chloroethane.b) Give mechanism for the formation of the tertiary amine in this reaction.4)Draw the structure of all the organic products formed when diethylamine reacts with 2-bromopropaneUse of quaternary ammonium salts Soap and detergent molecules are called surfactants and consist of an ionic "head" – this will dissolve in water and is known as being hydrophilic a long alkyl chain ("tail") – this dissolves grease (grease is not soluble in water) andis known as being hydrophobic.Micelles are formed as the soap/detergent molecules surround the dirt/greasemolecules, with the hydrophobic tails in the centre dissolving the grease, and thehydrophilic heads around the outside dissolving in the water.This is an example of a soap:OCO NaThis is an example of a detergent:OOSONaO Quaternary ammonium salts with some longchain alkyl groups are used as cationicsurfactants. Fabric softeners often contain cationicsurfactants as the surface of most materials is-ve charged. NCl-e.g. (CH3)2N[(CH2)16CH3]2 Cl www.CHEMSHEETS.co.uk16-July-2016Chemsheets A2 1078

6) NUCLEOPHILIC ADDITION-ELIMINATION REACTIONS (ACYLATION) Amines react with acyl chlorides and acid anhydrides to replace an H on the N with the acyl group. This produces an amide and a molecule of HCl or a carboxylic acid. A second molecule of the amine reacts with the HCl / carboxylic acid to form a salt.Equatione.g.acylation of an amine (using an acyl chloride)HORCR'ClNHROHCNHClR'HHthenR'NHHClR' NHCl-HOoverallRCHCl2 R'NHROHCNHR' NR'HCl-HMechanism(for acylchlorides): nucleophilic additioneliminationthen.H RNH2RNH3 TASK 51)Give balanced equation for:2)Give balanced equation and mechanism for: www.CHEMSHEETS.co.ukethylamine propanoic anhydridepropylamine butanoyl chloride16-July-2016Chemsheets A2 1078

www.CHEMSHEETS.co.uk 16-July-2016 Chemsheets A2 1078 b) By reduction of nitrile compounds This is the commonest way as it only forms one amine rather than a mixture.

Ch 06 Amines and Amides - Angelo State University
nucleic acids, alkaloid drugs, etc. (Alkaloids are N-containing, weakly basic organic compounds; thousands of these substances are known.) Amines are organic derivatives of ammonia, NH3, in which one or more of the three H’s is replaced by a carbon group. Amines are classified as primary (1 ), secondary
6m ago
15 Views