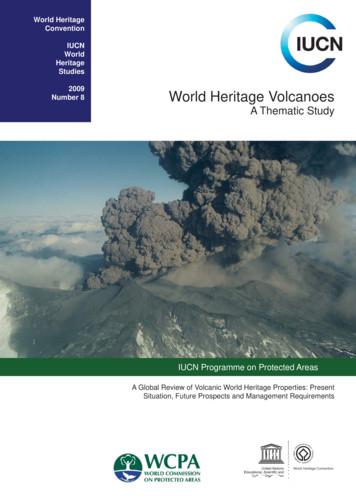 IUCN, International Union for Conservation of NatureFounded in 1948, IUCN brings together States, government agencies and a diverse range of non-governmental organizations in a unique world partnership: over 1000 members in all spread across some 140countries.As a Union, IUCN seeks to influence, encourage and assist societies throughout the world to conserve theintegrity and diversity of nature and to ensure that any use of natural resources is equitable and ecologicallysustainable. A central Secretariat coordinates the IUCN Programme and serves the Union membership,representing their views on the world stage and providing them with the strategies, services, scientific knowledge and technical support they need to achieve their goals.Through its six Commissions, IUCN draws together over 10,000 expert volunteers in project teams and action groups, focusing in particular on species and biodiversity conservation and the management of habitatsand natural resources. The Union has helped many countries to prepare National Conservation Strategies,and demonstrates the application of its knowledge through the field projects it supervises. Operations areincreasingly decentralized and are carried forward by an expanding network of regional and country offices,located principally in developing countries.IUCN builds on the strengths of its members, networks and partners to enhance their capacity and to supportglobal alliances to safeguard natural resources at local, regional and global levels.This study is produced as part of IUCN’s role as advisory body to the UNESCO World Heritage Conventionon natural heritage.IUCNProgramme on Protected AreasRue Mauverney 28CH-1196 GlandSwitzerlandwww.iucn.org/wcpa June 2009Cover Image: June 1996 eruption of Mt Ruapehu, which is one of four andesitic volcanoes in New Zealand’s Tongariro National Park, aWorld Heritage Cultural Landscape. Harry Keys

AcknowledgementsThis report has benefited from research of databases undertaken with the assistance of Jessica Roberts. Inaddition, thanks are extended to a number of external reviewers of this document. Nevertheless, any errorsor inaccuracies remain the sole responsibility of the author.DisclaimerThe designation of geographical entities in this book, and the presentation of material do not imply theexpression of any opinion whatsoever on the part of IUCN or other participating organizations concerning thelegal status of any country, territory, or area, or of its authorities, or concerning the delimitation of its frontiersor boundaries.The views expressed in this publication do not necessarily reflect those of IUCN or its partners.This publication has been made possible in part by funding from the UNESCO World Heritage Fund.IUCN and other participating organizations disclaim any errors or omissions in the translations of thisdocument from the original version in English.

both in themselves and as a part of integrated ecosystem management. One other important aspect ofmanagement not usually so dominant in other natural World Heritage properties is the hazardous behaviourof many volcanoes, necessitating the scientific monitoring of volcanic activity, as well as the preparation up ofHazard Assessments, Hazard Zone Maps and Risk Contingency Plans.IUCN World Heritage Studies2

IntroductionVolcanoes are perhaps the best known and most spectacular of the Earth’s geological features, and theimportance of some as outstanding earth-science features is recognised in their status as natural WorldHeritage properties. From the beautiful, soaring cone of Mt Kilimanjaro in Kenya, to the infamous Krakatau, apart of the Ujung Kulon National Park in Indonesia, or the giant slumbering caldera of Yellowstone in the UnitedStates of America, World Heritage volcanoes provide a diverse range of volcano types, geographical locationsand eruptive activities.Volcanoes capture the public’s imaginationnot only as beautiful and fascinatinglandforms, but also features whoseenormous power may threaten society. Notso widely appreciated is that the formationof the planet and the existence of life on ithave been dependent upon the activity ofvolcanoes throughout geological time. Ifthe ocean floors are included, over 80%of the Earth’s surface is of volcanic origin,while the gases emitted from volcanoesPlate 1: 1977 eruption of Krafla, NE Iceland, a fissure volcano onIceland’s Tentative List (photo: S. A. Thorarinsson)over hundreds of millions of years were instrumental in forming the Earth’s earliest oceans and atmosphere.These gases provided the ingredients vital to evolve and sustain life. Volcanoes are therefore true wondersof the planet and it is appropriate that notable ones have been recognised to be worthy of special protectionthrough their inclusion on the World Heritage List.Volcanoes are not randomly distributed over the Earth, but are found over areas where hot liquid rock (magma)has been able to rise and escape onto the Earth’s surface. As seen in Figure 1, volcanoes occur mainly alongthe boundaries of the Earth’s lithospheric (tectonic) plates, or at places in the interior of plates where risingmagma has punctured the crust (a place known as a ‘hot spot’). However, it should be remembered that thepresent-day distribution of volcanoes is a reflection of the current arrangement of lithospheric plates, and thatin the geological past the pattern of plates and therefore the distribution of volcanoes changed constantlythroughout time. This means that in addition to present day volcanoes, we also find evidence of ancientvolcanism in the historical, or stratigraphical, record, at locations typically remote from any current plateboundary or hot spot.What are volcanoes? To the scientist, they provide vital clues on the internal workings of the Earth. Theyrepresent the places where hot, buoyant magma ascends from the upper mantle or lower crust and migratestoward the Earth’s surface. The magma’s ascent may be arrested in the crust, where it may crystallize to forman intrusive body of igneous rock, or it may travel to the surface and break out (erupt) to build a suite of diversevolcanic landforms. However, the landforms that the erupting material constructs are varied in scale and form,determined both by the chemical and physical properties of the magma, and the style and environment of theeruption.Crucial to the behaviour of any volcano is the rheological, or flow, properties of the magma, the most importantbeing its viscosity. Viscosity in turn is determined by the magma’s chemical composition, gas content anddegree of crystallisation. The more viscous the magma, the more explosive the eruption, producing a higherproportion of ejected fragmentary material. Thus, if the magma is relatively fluid (low viscosity), its effusion will3IUCN World Heritage Studies

Figure 1: Map showing the Earth’s tectonic plates and distribution of active volcanoes (courtesy of USGS).normally take place without significant explosive activity (unless water enters the system), which is a style oferuption that will form lava plains, lava fields and low-angled shield volcanoes. If the viscosity of the magma ishigh, escaping gases are released explosively, blasting magma and fragments of the pre-existing volcano intothe air, to fall back to Earth as bombs, lapilli, or ash, collectively known as pyroclastic material. Such activity,combining lava flows and pyroclastic deposits, builds steep conical mountains, known as stratovolcanoes,surmounted by one or more craters of different types. As a further variant, magma with particularly highviscosity can be slowly extruded from vents, like toothpaste from a tube, to form mounds of varying sizes,known as lava domes. However, this is a very simple interpretation, and in reality there is a great diversity oferuption styles and volcanic constructions.Given their large scale, and their powerful and unpredictable behaviour, the protection of the heritage valuesof volcanoes and volcanic landscapes is a challenging task. To date, their conservation has been ratherhaphazard, partly because of the remoteness and apparent barrenness of volcanic terrains, and also becausemany conservation agencies have considered that such geological resources are little threatened. However,this approach is far from the truth and the integrity of many of the world’s volcanic landscapes and featuresare under threat from such things as recreational overuse, mineral extraction and encroaching development.In addition, it should not be forgotten that volcanoes are hazardous environments, and while managementintervention is often necessary to achieve conservation goals, it is also an essential means by which the risksto communities living on and around volcanoes may be reduced.IUCN World Heritage Studies4

The purpose of the studyThis report provides a review of the volcanic landforms and landscapes inscribed on the World Heritage List. Italso reviews those included on the Tentative Lists of States Parties to the World Heritage Convention that maybe proposed for nomination in future, and other significant volcanic features that might have the potential to beadded to the List. The report 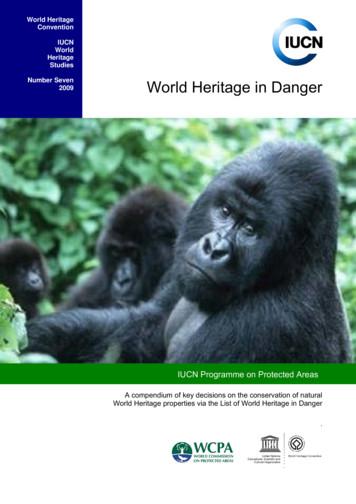 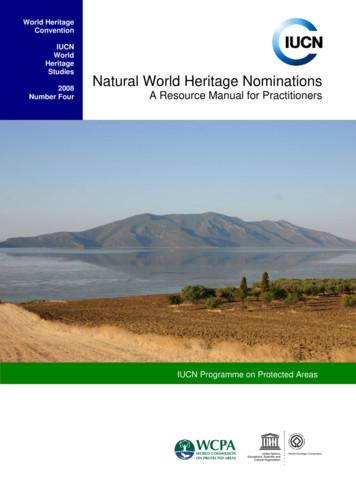 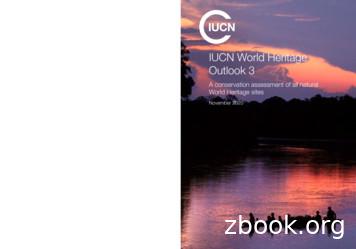 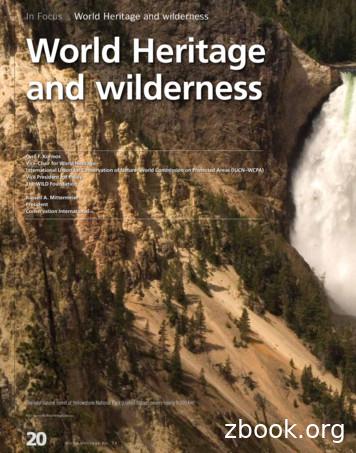 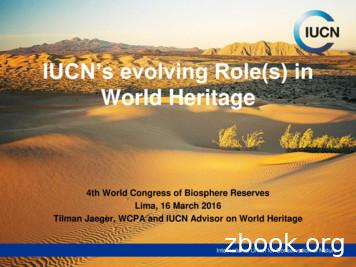 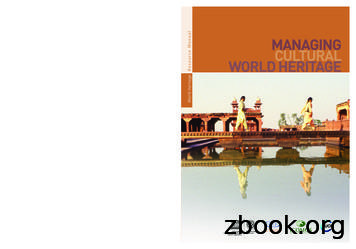 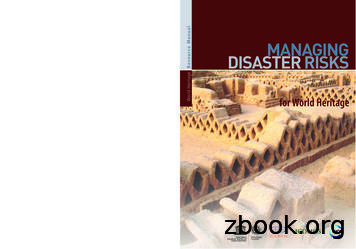 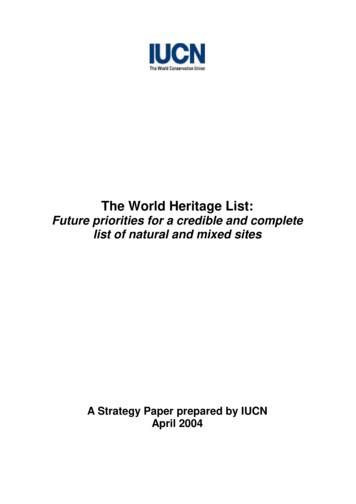 The World Heritage List - UNESCO
The World Heritage List: WHC-04/28.COM/INF.13B, p. 3 Future priorities for a credible and complete list of natural and mixed sites Acknowledgements This paper has been prepared by IUCN Programme on Protected Areas (PPA) with the valuable input of the members of the IUCN World Heritage Panel. IUCN would not have been able to
1m ago
3 Views 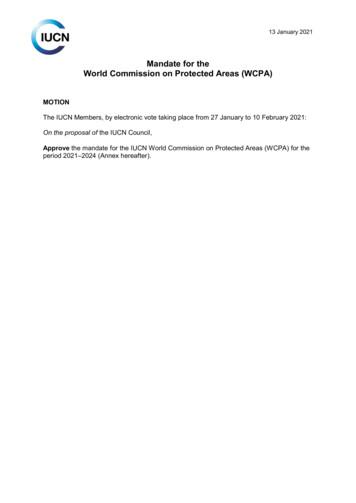 Mandate for the World Commission on Protected Areas (WCPA)
Diversity (CBD), World Heritage Convention, other biodiversity conventions and the, SDGs, there is an urgent need to scale up effective protection of land, freshwater and ... Support Unit, Global Protected Areas Programme and World Heritage Programme in the IUCN Secretariat and will work with IUCN RegionalOffices, other Commissions and IUCN Members
1m ago
3 Views 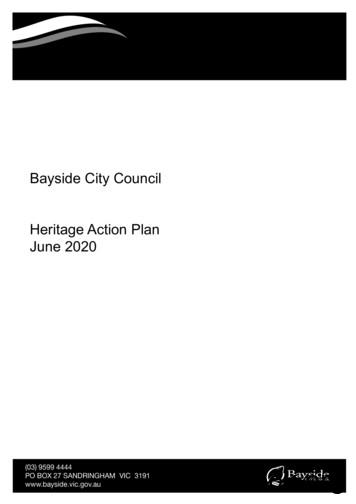 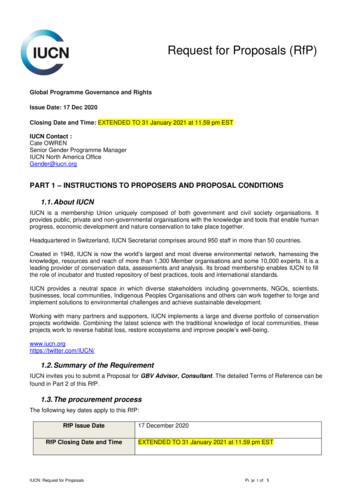 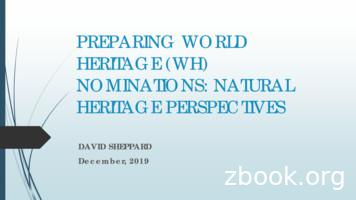 PREPARING WORLD HERITAGE (WH) NOMINATIONS: NATURAL .
• Partnership with the World Heritage Centre, ICOMOS and ICCROM, and UNEP-WCMC; • Promotion of World Heritage properties as “flagships” of natural and cultural conservation; • Use of IUCN and other specialist networks - including with IUCN World Commission for Protected Areas, Species Survival
1m ago
3 Views
Popular Tags
Recent Views