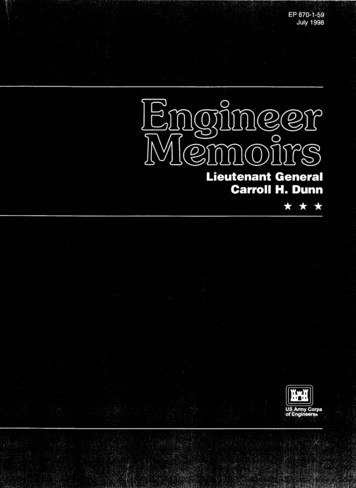 Carroll H. DunnForewordThis is the eleventh publication in the j%@ ee e z series of career interviews. The seriescontains the selected recollections of major figures in recent Corps history. These memoirs lendimportant perspective to decisionmaking, now and in the future. By making these recollectionsavailable, the series preserves and shares the knowledge and experience of retired Corpsofficers and civilians.Carroll H. Dunn had a distinguished career in the United States Army, which culminated withhis two-year tenure as the director of the Defense Nuclear Agency from 197 1 to 1973. In hisearlier assignments he commanded the 105th Engineer Combat Battalion in the EuropeanTheater during World War II and was the executive to the Chief of Engineers. He headed theDirectorate of Construction, Military Assistance Command, Vietnam, and the Directorate ofMilitary Construction, Office of the Chief of Engineers. His last assignment with the Corps wasas Deputy Chief of Engineers. I recommend this interview to thoughtfuloficers and civiliansof the engineer [email protected] General, USACommanding.Ill

Engineer MemoirsThe InterviewerPaul K. Walker is the chief historian, U.S. Army Corps of Engineers. He received a B.A. fromGeorge Washington University and a Ph.D. from the University of North Carolina, Chapel Hill.He has been an Army historian since 1978. His publications includeThe Corps Responds: AHistory of the Stisquehanna Engineer District and Tropical Storm Agnes (I 978) andEngineers of Idependence: A Documentary History of the Army Engineers in the AmericanRevoZution, 177.54783 (198 1). He has also published articles on canal construction in theUnited States, Revolutionary War engineering, and the early history of Baltimore.AcknowledgmentsDr. Barry W. Fowle, director of the oral history program of the Office of History,Headquarters, U.S. Army Corps of Engineers, was responsible for publishing this manuscript.Marilyn Hunter, also of the Offke of History, provided editorial and technical support.iv

Carroll H. DunnCarroll Hilton DunnCarroll H. Dunn was born in Lake Village, Arkansas, 11 August1916. He earned a bachelorof science degree in mechanical engineering from the University of Illinois, Urbana, Illinois, in193 8. He was commissioned a second lieutenant in the Regular Army by professionalexamination 1 July 1938. His first assignment was with the 8th Engineer Squadron, 1st CavalryDivision, Laredo, Texas. In February 1941 he was assigned to the Engineer ReplacementTraining Center, Fort Leonard Wood, Missouri.In November 1942 he served the 30th Infantry Division as division engineer and concurrentlybattalion commander, 105th Engineer Combat Battalion. He remained assigned to this divisionthrough training at Camp Blanding, Florida; Camp Forrest, Tennessee; and Camp Atterbury,Indiana, and deployed overseas to England. From June 1944 to May 1945 he participated withthe 30th Division in combat in Europe, going from Omaha Beach to Magdeburg, Germany. Hewas wounded by an enemy mine in the attack of Saint Lo, and spent two months in a hospitalin England, returning to join his unit for the final drive into Germany.In July 1945 he was assigned to the 2d Infantry Division as Assistant Chief of Staff (G-4) aposition which he held until May 1946 when he was sent to the State University of Iowa, IowaCity, Iowa. He earned a master of science degree in civil engineering in June 1947, then taughtcombat engineering at the Engineer School, Fort Belvoir, Virginia.From October 1949 to August 1952 he was assigned to the Engineer Section, GeneralHeadquarters, Far East Command, where his principal duties were staff supervision of theconstruction activities.He returned to the United States in August 1952 and became the director of the U.S. ArmyWaterways Experiment Station, Vicksburg, Mississippi, a principal research facility inhydraulics, soils, and concrete. He continued in this assignment until July1955, when he wassent to Washington, D.C., to become the executive officer to the Chief of Engineers, anassignment he held until August 1958 when he was selected to attend the Industrial College ofthe Armed Forces, Washington, D.C.Upon graduation he went to Thule, Greenland, as the area engineer, and was responsible forconstruction of facilities for the nation’s first ballistic missile early warning system. Returningto the United States in July 1960, he joined the newly organized Corps of Engineers BallisticMissile Construction Office at Los Angeles, with the dual position of deputy commander anddirector of the Titan II missile system construction.vii

Erwineer MemoirsWith his nomination for promotion to brigadier general on 18 January 1962, he was reassignedas the division engineer of the U.S. Army Engineer Southwester Division, Dallas, Texas,effective 1 March 1962. In that assignment he was responsible for a construction programexceeding 300 million per year. Among the many construction projects under his supervisionwere the Manned Spacecraft Center at Houston, and the 1.2 billion program to improve theArkansas River for navigation, flood control, water supply, and power.On 1 August 1964 he was assigned to the Eighth U.S. Army in Korea as deputy chief of staffuntil 17 January 1966 when he was reassigned to Vietnam to assume directive control of allDepartment of Defense construction programs there. He served as Directorcf Construction,United States Military Assistance Command, Vietnam, until 30 June 1966.On 1 July he became the Assistant Chief of Staff for Logistics (J-4), United States MilitaryAssistance Command, Vietnam. In this assignment, he was responsible for coordinating alllogistics support for the U.S. and free world forces in Vietnam, essentially assuring that themateriel, equipment, and transportation needed to support combat operations were available.He continued to hold this position until 15 September 1967.On 16 October 1967 he was assigned as Director of Military Construction, Office of the Chiefof Engineers, Washington, D.C. In this position he was responsible for military constructionwithin the Army and for construction and design work performed for the Air Force, theNational Aeronautics and Space Administration, and other government agencies. He was alsoresponsible for the Army Nuclear Power Program and specialized fallout shelter engineeringsupport for Civil Defense. The work assigned to the directorate totaled approximately 1billion a year.General Dunn was appointed Deputy Chief of Engineers on 1 August 1969. In this position,he was the principal assistant and advisor to the Chief of Engineers in coordinating andsupervising the worldwide construction, real estate, and mapping and geodesy responsibilitiesof the Corps of Engineers and in monitoring all Army military engineer matters.Lieutenant General Dunn became the director of the Defense Nuclear Agency on 2 August1971. He was responsible for the management of defense nuclear weapons testing, nuclearweapons effects research program, and nuclear weapons stockpile. He also provided staffadvice and assistance on nuclear weapons matters.He was a member and later chairman of the NASA Aerospace Safety Advisory Panel from 6February 1968 until he retired from the Army on 30 September 1973.On 1 October 1973 General Dunn joined Consolidated Edison Company of New York as VicePresident/Construction. In September 1974 he became Senior Vice President/Construction,Engineering and Environmental Affairs. He retired from Consolidated Edison in August 198 1.

Carroll H. DunnOn 1 May 1980 on leave of absence from Consolidated Edison, he began work as the full-timeproject director of the Business Roundtable’s Construction Industry Cost Effectiveness Project.He retired from these activities in 1988.The College of Engineering at the University of Texas has established the Carroll H. DunnEndowed Graduate Fellowship in Engineering. Also, the Carroll H. Dunn Award of Excellenceis given by the Construction Industry Institute to individuals who make significant improvementin the construction industry.He and his wife Letha moved to Pinehurst, North Carolina, in August 1981 and to The Fairfaxnear Fort Belvoir, Virginia, in 1996.In February 1998, General Dunn was elected to membership in the National Academy ofEngineering.ix

Carroll H. DunnLieutenant General Carroll H. Dunn’The Early Years, 1916 to 1934Q .A .I’m somewhat less familiar with your early years than with some of the other people’sbecause you didn’t go to West Point. But I do know that you were born in LakeVillage, Arkansas, on 11 August 1916. I was wondering if you could tell me a little bitabout Lake Village and your early precollege years there.Lake Village is a small town, at that time (19 16) around 1,200 to 1,400 people; thecounty seat of Chicot County. It is located in the southeast corner of Arkansas. Oneside is bounded by the Mississippi River, which is the boundary between Arkansas andMississippi. The other-the southern side - f o r m s the joint boundary betweenLouisiana and Arkansas. It is an agricultural community primarily, with very fertile,alluvial soil subject to overflow from the Arkansas and Mississippi rivers in the earlydays. Its chief feature was a lake that at one time had been a bend in the Mississippi,which, probably around 1500 or thereabouts, had been naturally severed from the river.It became a natural lake. As I remember it, it was the largest so-called natural lake inArkansas.My father was basically a farmer, though he did other things through his life. I was thesecond of four boys (one died in infancy) born into the family. We lived in Lake Villagefor several ye:ars, and then about 1917 moved to south Mississippi, which had been theoriginal home of both my parents when they were married. We lived there until early1920, when -we moved back to Arkansas. The remainder of my life prior to going tocollege was spent in that community. All of my attendance at grade and high schoolwas in Lake Village, where I graduated from Lakeside High School in1934.Q .A .You said that your father was in farming and other pursuits. Beyond that, was there anymilitary service background in your mother’s or father’s family?A younger brother of my dad served in World War I as a private and corporal in theinfantry. And., as I understand, my great grandfathers on both my mother’s and father’s‘Dr. Paul K. Walker conducted this tape-recorded interview with Lieutenant General (Ret. ) CarrollH. Dunn in Washington, DC., and New York City. The interview took place in April and July 198 1. Both GeneralDunn and Dr. Walker edited the transcript. The o

Engineer Memoirs The Interviewer Paul K. Walker is the chief historian, U.S. Army Corps of Engineers. He received a B.A. from George Washington University and a Ph.D. from the University of North Carolina, Chapel Hill.

Ted Cordua Memoirs - Alfred Corduan's Home Page
The Memoirs of Theodor Cordua THE PIONEER OF NEW MECKLENBURG IN THE SACRAMENTO VALLEY Edited and Translated by Erwin G. Gudde INTRODUCTION W IIILE there is no dearth of diaries and memoirs written in the hectic years following the discovery of gold, we have only few contemporary sources which give us a glimpse of the history of California during the
8m ago
24 Views

Memoirs - Pearson Education
Memoirs This diagram shows a basic organization for a memoir, but other arrangements of these sections will work, too. You should alter this organization to fit the features of your topic, angle, purpose, readers, and context. a t– a – g lance Using rich detail, memoirs tell a personal story in which an event or series of events
8m ago
22 Views

Association of the United States Army Employee Handbook
advancing the interests of America’s Army and the men and women who serve. Our Mission The Association of the United States Army is a nonprofit educational and professional development association serving America’s Total Army, our Soldiers, Army civilians, and their families; our industry partners, and supporters of a strong national defense.
8m ago
24 Views
Popular Tags
Recent Views