Diversity, Innovation And Entrepreneurship: Where Are We . - Free Download PDF 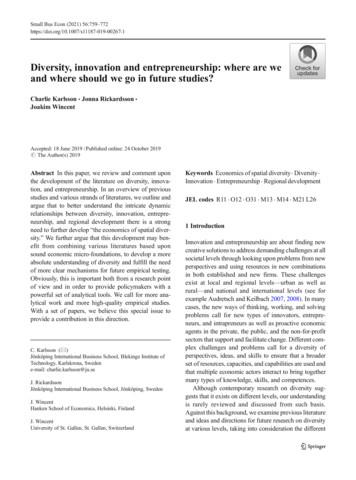 Small Bus Econ (2021) 67-1Diversity, innovation and entrepreneurship: where are weand where should we go in future studies?Charlie Karlsson & Jonna Rickardsson &Joakim WincentAccepted: 18 June 2019 / Published online: 24 October 2019# The Author(s) 2019Abstract In this paper, we review and comment uponthe development of the literature on diversity, innovation, and entrepreneurship. In an overview of previousstudies and various strands of literatures, we outline andargue that to better understand the intricate dynamicrelationships between diversity, innovation, entrepreneurship, and regional development there is a strongneed to further develop “the economics of spatial diversity.” We further argue that this development may benefit from combining various literatures based uponsound economic micro-foundations, to develop a moreabsolute understanding of diversity and fulfill the needof more clear mechanisms for future empirical testing.Obviously, this is important both from a research pointof view and in order to provide policymakers with apowerful set of analytical tools. We call for more analytical work and more high-quality empirical studies.With a set of papers, we believe this special issue toprovide a contribution in this direction.C. Karlsson (*)Jönköping International Business School, Blekinge Institute ofTechnology, Karlskrona, Swedene-mail: [email protected] RickardssonJönköping International Business School, Jönköping, SwedenJ. WincentHanken School of Economics, Helsinki, FinlandJ. WincentUniversity of St. Gallen, St. Gallen, SwitzerlandKeywords Economics of spatial diversity . Diversity .Innovation . Entrepreneurship . Regional developmentJEL codes R11 . O12 . O31 . M13 . M14 . M21 L261 IntroductionInnovation and entrepreneurship are about finding newcreative solutions to address demanding challenges at allsocietal levels through looking upon problems from newperspectives and using resources in new combinationsin both established and new firms. These challengesexist at local and regional levels—urban as well asrural—and national and international levels (see forexample Audretsch and Keilbach 2007, 2008). In manycases, the new ways of thinking, working, and solvingproblems call for new types of innovators, entrepreneurs, and intrapreneurs as well as proactive economicagents in the private, the public, and the non-for-profitsectors that support and facilitate change. Different complex challenges and problems call for a diversity ofperspectives, ideas, and skills to ensure that a broaderset of resources, capacities, and capabilities are used andthat multiple economic actors interact to bring togethermany types of knowledge, skills, and competences.Although contemporary research on diversity suggests that it exists on different levels, our understandingis rarely reviewed and discussed from such basis.Against this background, we examine previous literatureand ideas and directions for future research on diversityat various levels, taking into consideration the different

C. Karlsson et al.760roles of diversity on knowledge generation and externalities, innovation, and entrepreneurship as well as theinterdependence of these levels of diversity. In thispaper, we also introduce the different contributors tothis special issue. This special issue contains most ofthe key-note presentations at the 21st Uddevalla Symposium, Luleå, Sweden 2018, which had the purpose tobring together a group of international scholars to present and discuss new aspects of diversity, innovation, andentrepreneurship from regional, urban, national, andinternational perspectives. With a diverse set of papers,which all have been revised after having gone through apeer review process, it is our hope that this special issueimplies a small contribution to “the economics of spatialdiversity.”A large set of empirical studies supports the view thatthere are positive effects of diversity.1 Over the last twodecades, the empirical evidence of “spatial diversityeconomies” in terms of creativity (Andersson et al.2005), innovation (Ozgen et al. 2012), entrepreneurship(Rodríguez-Pose and Hardy 2015), and productivity(Trax et al. 2015) has multiplied. Population diversityhas, for example, been found to have a positive influence on economic development in the short, medium,and long run, and while this relationship is attenuatingafter 30 years, it stays strong (Rodríguez-Pose and vonBerlepsch 2018). Quigley (1998, 136) in a survey onurban diversity and growth writes:“no matter how [empirical] results are described, itremains clear that the increased size of cities andtheir diversity are strongly associated with increased output, productivity and growth. Largecities foster specialization in production and sustain a broader range of final products, increasingreturns of their firms and the well-being of theirresidents.”2 Diversity, innovation, entrepreneurship,and regional development—an introductionRegions are more and more regarded to be criticaldrivers of economic development with urban regionsas the main nodes in the global economy (Malecki2007). The innovation and the entrepreneurship thatthey have a capacity to spawn are increasingly seen asthe key factor underpinning their future growth trajectories (Fritsch and Mueller 2004). Urban regions have inthe modern knowledge economy become incubators ofnew ideas and provide opportunities for the discovery ofnew valuable knowledge, which generates a foundationfor innovation and entrepreneurship (Huggins andWilliams 2011). Researchers have long studied the economic success of urban regions trying to understandwhat factors are driving their pre-eminent economicdevelopment. A growing body of research is todaystressing the links between on the one hand regionaldiversity and on the other hand regional knowledgegeneration, innovation, and entrepreneurship. It is todaya stylized fact that larger cities tend to be more diversified than smaller ones (Duranton and Puga 2000), anddiversity in urban regions has often been seen as theunique asset of cities and what makes their wealth anddrives their long-term economic development andgrowth (Jacobs 1969; Florida 2002). Diversity of regions and nations has many dimensions and includenationality, ethnicity, culture, religion, language, gender,education, experience, occupation, knowledge mix, industrial mix, and so on.The interest in diversity is not a new phenomenon.Researchers has for several decades explored the effectsof diversity, especially in urban regions. It has inregional and urban economics been demonstrated thatthere exists a fundamental relationship between marketsize and diversity. For example, in spatial models,building upon the general model of monopolisticcompetition developed by Dixit and Stiglitz (1977)drawing upon Chamberlain (1933), diversity in inputsgenerates increasing returns at the aggregate level(Fujita and Thisse 2002). Due to increasing returns ofdiversity in intermediaries, firms located in a region witha diverse set of input suppliers will have higher productivity than similar firms located in a region with a lessdiverse supply of inputs.1These results have been questioned by some researchers pointing atthe difficulties in developing a workable definition of diversity as wellas measuring it (Rosenthal and Strange 2004). The smaller the area ofanalysis, ceteris paribus, the greater the apparent levels of specialization, while the larger the area, the greater will be the apparent level ofdiversity. This endogeneity of the area size is a variation on themodifiable unit area problem (Openshaw and Taylor 1999), whichneeds to be controlled for. Malizia and Feser (1999) make an importantremark in this respect: “Economic diversity is the presence of multiplespecializations. This definitional point deserves emphasis because thediversity literature is confusing.”

Diversity, innovation and entrepreneurship: where are we and where should we go in future studies?Jacobs (1969) developed the theory of external economies which discusses the role of diversity on regionalgrowth. Jacobs argues that cultural heterogeneity withina labor force expands the collective variety of skills,knowledge and ideas that are contained within it, becoming a vital and precious economic asset for a region’s economic development. Furthermore, diverse regional populations provide a richer mix of skills, tastes,and ideas, which span across a wider range of cultures(Sobel et al. 2010) but also a richer mix of intra- andinterregional networks, i.e. a larger network capital(Huggins and Thompson 2015). This facilitates interaction and flows of ideas, information, and knowledgewithin and across regions both vertically and horizontally (Contractor and Lorange 2002). Jacobs’ understanding of the drivers of regional growth are in linewith the explanations offered by modern models ofendogenous economic growth, where the generation,transfer, and use of knowledge within and across regional economies increasingly are seen as the main drivers ofregional economic growth (Antonelli et al. 2011).One of Jacobs’ insights is that urban development andgrowth stems in large part from the possibility that individuals can experiment with and combine differentsources of knowledge and interact with individuals withdifferent experiences and background. The differentiatededucation, experiences, and cultural background of people shape the idiosyncratic ways in which different people interpret, understand, and evaluate the world aroundthem (Noteboom 2000). This implies that a higher diversity may benefit regional economies by expanding theregional knowledge base as well as increasing its absorptive capacity (Cohen and Levinthal 1990), improving itsability to identify, evaluate, assimilate, and exploit newknowledge (Hong and Page 2001).The more diverse a region’s population, the wider therange of accessible knowledge stemming from people’svarying backgrounds and the more possibilities to combine existing knowledge (Qian 2013).2 Desrochers(2001) suggests that a diversified city, where diversityalso includes cultural diversity (Nathan and Lee 2013),is likely to increase the probability of combiningexisting resources in different configurations by offering2Several studies from both the USA and Europe provide empiricalevidence of a positive effect of migrant diversity on average laborproductivity (Sparber 2007; Huber et al. 2010). Südekum et al.(2009) found positive wage and employment effects for the size andmix of high-skilled migrants but not for lower-skilled migrant workersin German regions.761a greater number and variety of problems to be solved,as well as a much wider pool of expert knowledge andother resources to develop new solutions. Furthermore,communication between individuals that do not have acommon knowledge base is facilitated by geographicalproximity and its resulting increased face-to-facecommunication.The above discussion displays a positive relationshipbetween regional diversity and regional performance.However, the discussion on whether it is localizationexternalities or diversity externalities that brings mosteconomic growth is still topical.3 More recently, there isalso a growing literature arguing that too much diversityor too much specialization, in terms of skills, industrymix, etc. can aggravate regional growth. Frenken et al.(2007) introduce the concepts of related and unrelatedvariety and argue that geographical proximity is notenough for knowledge to spill over across individualsand firms, but some sort of cognitive proximity mustalso be present. Frenken et al. (2007) defines relatedvariety as within-industry diversity and unrelated variety as between-industry diversity. Empirical studies confirm that related variety, associated with Jacobs-typediversity externalities across related industries have significant effects on regional development (Frenken et al.2007; Boschma and Iammarino 2009; Neffke et al.2011). Empirica

JEL codes R11.O12.O31.M13.M14.M21L26 1 Introduction Innovation and entrepreneurship are about finding new ... regional and urban economics been demonstrated that there exists a fundamental relationship between market size and diversity. For example, in spatial models, 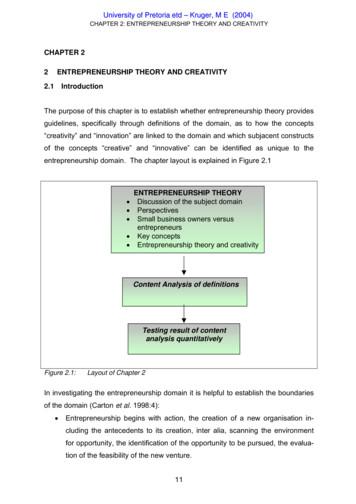 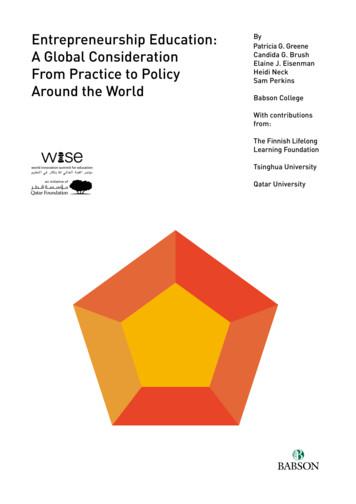 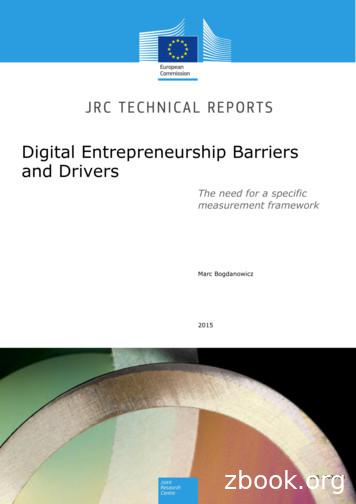 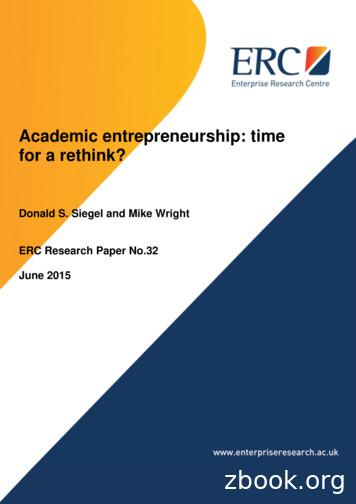 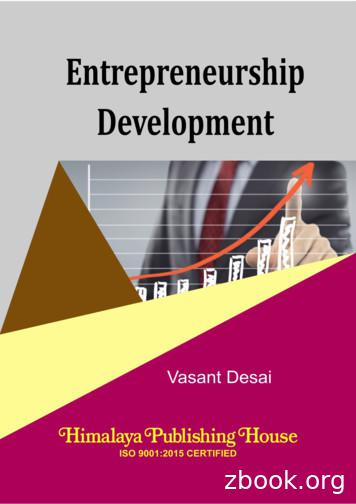 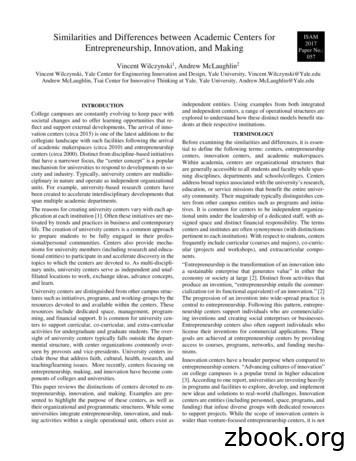 Similarities and Differences between Academic Centers for .
elements of entrepreneurship, innovation, and making are in-tegrated into a single center. ACADEMIC CENTERS FOR ENTREPRENEURSHIP, INNOVATION AND MAKING AS MULTIPLE SINGLE-FOCUSED ENTITIES Three institutions are presented where multiple single-fo-cused centers support entrepreneurship, innovation, or mak-ing.
1m ago
4 Views 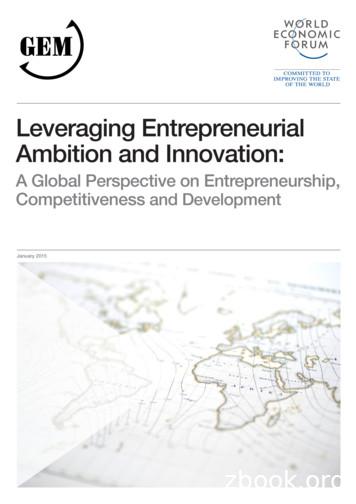 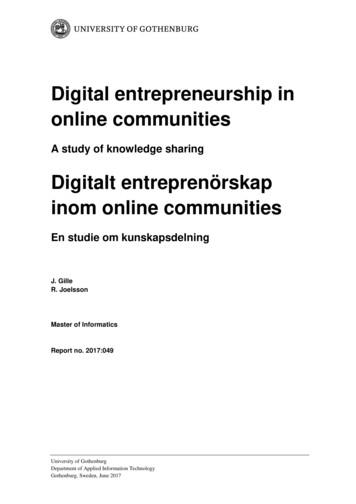 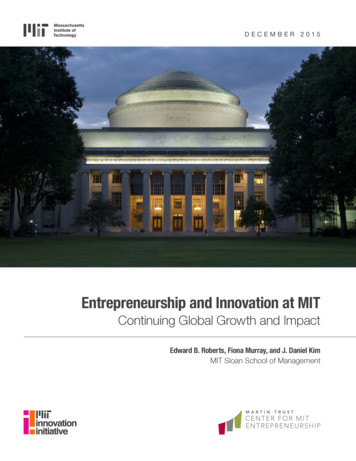 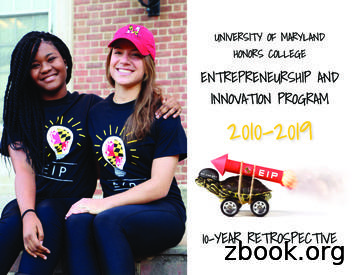 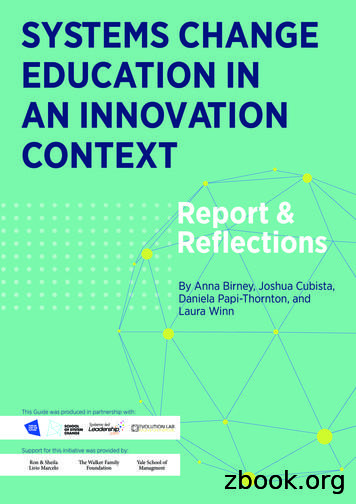