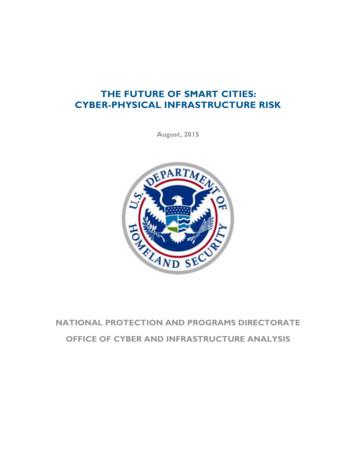 EXECUTIVE SUMMARYThe Department of Homeland Security’s Office of Cyber and Infrastructure Analysis (DHS/OCIA) producesInfrastructure Risk Assessments to provide an assessment of emerging risks to critical infrastructure.1,2 This reportaddresses how the adoption of and increased reliance on smart technologies may create or increase risks forSmart Cities. This report focuses on the Transportation Systems Sector, the Electricity Subsector within theEnergy Sector, and the Water and Wastewater Systems Sector.As technology pervades into our everyday lives, once simple devices have become smarter and moreinterconnected to the world around us. This technology is transforming our cities into what are now referred toas “Smart-Cities”. Smart Cities have been defined as urban centers that integrate cyber-physical technologies andinfrastructure to create environmental and economic efficiency while improving the overall quality of life.3 The goalof these new cities is to create a higher quality of life, a more mobile life and an overall increased efficient use ofavailable resources. Some examples of Smart-City technologies are interconnected power grids reducing powerwaste, smarter transportation resulting in increased traffic management, and smarter infrastructures that reducehazards and increase efficiency.This interconnectedness of devices introduces cyber-physical technologies that connect cyber systems to physicalsystems, thereby removing the barrier between the cyber and physical worlds. Some cyber-physical systems areintegrated at the design stage unlike more traditional legacy systems; a full-fledged cyber-physical system is typicallydesigned as a network of interacting elements with physical input and output instead of as standalone devices.Smart City, in everyday use, is inclusive of terms such as ‘digital city’ or ‘connected cities’. Cyber-physicalinnovations feature prominently in Smart Cities, particularly as cyber-physical technologies are increasingly addedto existing infrastructure and built into newly constructed infrastructure. Removing the cyber-physical barriers inan urban environment presents a host of opportunities for increased efficiencies and greater convenience, but thegreater connectivity also expands the potential attack surface for malicious actors. In addition to physical incidentscreating physical consequences, exploited cyber vulnerabilities can result in physical consequences, as well.The vulnerabilities and attack classes (such as distributed denial of service, malware, and phishing attacks) to mostlogical technologies such as computers and servers have been researched over the decades and years and are wellunderstood by security researchers. Although the specifics of the attacks and potential consequences can vary witheach type of attack the basic structures and general mitigations for these attacks are known. The same can be saidof the vulnerabilities and mitigation factors for physical infrastructure. However, with the introduction of SmartCities and cyber-physical innovations the vulnerabilities, resulting mitigating factors, and potential consequences forthese new technologies are still unclear. As these new cyber-physical devices are introduced to the World thevulnerabilities, risks, threats, and consequences will be better understood. This report summarizes the insightsfrom a technology-informed futures analysis—including a critical look at potential future vulnerabilities as a resultof these cyber-physical infrastructure systems become pervasive in Smart Cities. The goal is to help Federal, Stateand local analysts and planners incorporate anticipatory thinking into Smart City design and continued criticalinfrastructure protection efforts relating to this new technology. The analysis focuses on specific cyber-physicaltechnologies that represent key aspects of the future of Smart City infrastructure (Table 1).Risk is defined as the potential for an unwanted outcome resulting from an incident, event, or occurrence, as determined by its likelihood and the associatedconsequences. It is often thought of as a function of threat, vulnerability, and consequence, where threat and vulnerability are components of likelihood (U.S.Department of Homeland Security Risk Steering Committee, DHS Risk Lexicon, Washington, D.C.: U.S. Department of Homeland Security, 2010).2 Critical infrastructure are the assets, systems, and networks, whether physical or virtual, so vital to the United States that their incapacitation or destructionwould have a debilitating effect on security, national economic security, national public health or safety, or any combination thereof. (DHS, “What Is CriticalInfrastructure?” http://www.dhs.gov/what-critical-infrastructure, accessed, August 18, 2014).3 In addition, a smart city “gathers data from smart devices and sensors embedded in its roadways, power grids, buildings, and other assets. It shares that data via asmart communications system that is typically a combination of wired and wireless. It then uses smart software to create valuable information and digitally enhancedservices.” (Smart Cities Council, “Vision,” http://smartcitiescouncil.com/category-vision, accessed February 4, 2015).1NATIONAL PROTECTION AND PROGRAMS DIRECTORATE OFFICE OF CYBER AND INFRASTRUCTURE ANALYSIS2

Increased Automation – Cyber-physical infrastructure can migrate control from people to algorithm-basedsystems, introducing a level of security and resilience into a system by mitigating any potential human errors.However, in addition to mitigating some risks, removing human interaction with the system, potentially introducessome new security challenges, including, but not limited to, issues associated with: Increasing the number of system access points and, therefore, potential attack vectors; Skill atrophy; Loss of visibility into all parts of a system; Cascading failures; necessary changes in emergency response plans (e.g., humans will not be present inareas of the system they once were); Unanticipated permutations of automated functioning; or Unintentional elimination of manual overrides.OPPORTUNITIES FOR DHSState and local governments, in partnership with industry, will largely drive the evolution of cyber-physicalinfrastructure in Smart Cities. DHS can contribute to this stakeholder community to help it anticipate and plan forpotential risk, and to influence the overall security environment in which these technologies will exist. DHS canassist in the development of standards and regulations, helping to ensure consistency across sectors andgeographic areas. Strategic communication and engagement may influence a more secure evolution ofcyber-physical infrastructure as Smart Cities adopt technologies at varying rates. DHS can also facilitate or directFederal assistance to State and local governments.NATIONAL PROTECTION AND PROGRAMS DIRECTORATE OFFICE OF CYBER AND INFRASTRUCTURE ANALYSIS4

SCOPEThis report addresses the question: How might vulnerabilities in Smart City cyber-physical infrastructure beexploited to create significant damage to the economy, public health and safety, or national security? The threesectors explored in this report are the Transportation Systems Sector, the Electricity Subsector within the EnergySector, and the Water and Wastewater Systems Sector.The analysis in this report is based on specific cyber-physical technologies relating to the Transportation Systems,Energy, and Water and Wastewater sectors. OCIA has collaborated with industry experts to select thesetechnologies, from a wide range of current and emerging technologies based on the following criteria: Likelihood of adoption by cities within the next 5 – 10 years. The potential to have transformational impact on the growth and trajectory of Smart Cities. The potential direct impact on public safety and national security.The technologies are not intended to be an exhaustive list; instead, they represent cyber-physical trends thatcharacterize key aspects of the future of Smart Cities.This report identifies future pathways for potential disruptions and makes technology-specific observations foreach sector analyzed for this study. Furthermore, this report discusses the nature of future vulnerabilities and tobetter understand how they might be exploited in ways that lead to physical consequences. The pathways are notidentified as a likely future or suggest where the risks may be highest.The technology-specific observations synthesize findings across the pathways to highlight potential vulnerabilitiesthat, if unaddressed, may increase the risk profile of a technology or infrastructure sector in a Smart City. Theseobservations are categorized into the three high-level themes—changing seams, inconsistent adaptation, andincreased automation—that transcend the security challenges associated with the evolution of cyber-physicalsystems in Smart Cities.The report concludes with Opportunities for DHS, which detail areas where DHS can assist its partners toanticipate and mitigate risk, and influence the overall security environment in which these technologies will exist.These opportunities fall into three categories of “levers” available to DHS: standards and regulations,communication and engagement, and Federal assistance.NATIONAL PROTECTION AND PROGRAMS DIRECTORATE OFFICE OF CYBER AND INFRASTRUCTURE ANALYSIS6

INTRODUCTIONMany U.S. cities are experiencing substantial population growth, and State and local governments are struggling tokeep up with congestion, pollution, and the increased demands being placed on aging and failing infrastructure.Municipal governments are increasingly looking to address these concerns by networking various infrastructuresmart technologies of the city, which can support increased automation and responsiveness. In doing so, cities willbecome “Smart Cities”—urban centers that integrate cyber-physical technologies and infrastructure to createenvironmental and economic efficiency while improving the overall quality of life.5 This transformation willsignificantly affect a city’s critical infrastructure, which is increasingly composed of cyber-physical systems.Traditionally, infrastructure in cities involved a series of standalone components; cyber-physical systems involve aseries of electronically networked physical elements, including embedded sensors, computation devices,communication technology, and actuators. Cyber-physical systems can capture a vast amount of data produced in acity to identify and implement new efficiencies. In addition to collecting data and suggesting more efficientprocesses, these systems can also automatically control and manipulate physical infrastructure to implementchanges. By developing a “system of systems,” a Smart City can integrate short- and long-term efficiencies.Although Smart Cities and the implementation of cyber-physical systems into critical infrastructure networks bringa host of much-needed benefits, they also introduce a new set of risks to public safety and, potentially, nationalsecurity. Historically, cyber and physical systems have operated fairly independently of one another. The impact ofa cyber-system disruption was contained within the cyber domain, and a physical disruption was contained in thephysical domain. Cyber-physical inf

Smart City, in everyday use, is inclusive of terms such as ‘digital city’ or ‘connected cities’. Cyber-physical innovations feature prominently in Smart Cities, particularly as cyber-physical technologies are increasingly added to existing infrastructure and built into newly constructed infrastructure. Removing the cyber-physical .