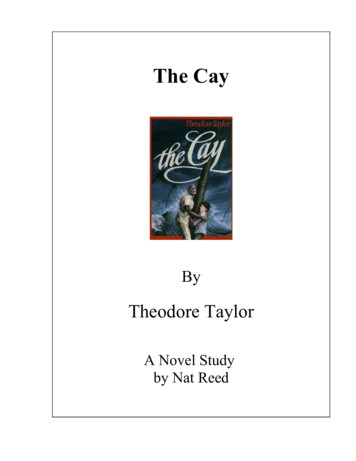 The CayBy Theodore TaylorTable of ContentsSuggestions and Expectations . . . . .3List of Skills . . 4Synopsis / Author Biography . 5Student Checklist 6Reproducible Student Booklet . 7Answer Key . .61About the author: Nat Reed has been a member of the teaching profession for morethan 35 years. He was a full-time instructor at Trent University in the Teacher EducationProgram for nine years. For more information on his work and literature, please visit thewebsites www.reedpublications.org and www.novelstudies.org.Copyright 2012 Nat ReedAll rights reserved by author.Permission to copy for single classroom use only.Electronic distribution limited to single classroom use only.Not for public display.2

The CayBy Theodore TaylorSuggestions and ExpectationsThis 65 page curriculum unit can be used in a variety of ways. Each chapter of the novelstudy focuses on one or two chapters of The Cay and is comprised of four sections: Before You ReadVocabulary BuildingComprehension QuestionsLanguage and Extension ActivitiesA principal expectation of the unit is that students will develop their skills in reading,writing, listening and oral communication, as well as in reasoning and critical thinking.Links with the Common Core Standards (U.S.)Many of the activities included in this curriculum unit are supported by the CommonCore Standards. For instance the Reading Standards for Literature, Grade 5, makesreference toa) determining the meaning of words and phrases. . . including figurative language;b) explaining how a series of chapters fits together to provide the overall structure;c) compare and contrast two characters;d) determine how characters respond to challenges;e) drawing inferences from the text;f) determining a theme of a story . . . and many others.Students can work on the activities at their own pace. Every activity need not becompleted by all students. A portfolio cover is included as well as a Student Checklist.Themes which may be taught in conjunction with the novel include racial prejudice,World War II, submarines, hurricanes, blindness, coral reefs, the Caribbean.3

The CayBy Theodore TaylorSynopsisPhillip is excited when the Germans invade the small island of Curaçao. War hasalways been a game to him, and he’s eager to glimpse it firsthand–until the freighter heand his mother are traveling to the United States on is torpedoed.When Phillip comes to, he is on a small raft in the middle of the sea. Besides StewCat, his only companion is an old West Indian, Timothy. Phillip remembers his mother’swarning about black people: “They are different, and they live differently.”But by the time the castaways arrive on a small island, Phillip’s head injury has madehim blind and dependent on Timothy. [The Publisher]Author BiographyTheodore TaylorTheodore Taylor (June 23, 1921, - October 26, 2006)was born in North Carolina and began writing at the ageof thirteen. Leaving home at seventeen to join theWashington, D.C. Daily News as a copyboy.During World War II, he first served as a cadet-ABseaman on a gasoline tanker, then became a navalofficer in the Pacific Theater.In 1955, a year after his first book, The MagnificentMitscher, Taylor joined Paramount Pictures as a pressagent; then became a story editor, finally, associateproducer. "Often exciting, often insane, film workprovided opportunity to work with some interesting andunique people — Clark Gable, Henry Fonda, Frank Sinatra, Shirley MacLaine,William Holden, Steve McQueen, Charlton Heston, Raquel Welch, and others, onseventeen major pictures." Following the filming of TORA! TORA! TORA!, heturned full-time to novels, non-fiction books and screen plays.Courtesy of Wikipedia (http://en.wikipedia.org/wiki/Theodore Taylor author)5

The CayBy Theodore TaylorChapter 1Before you read the chapter:The protagonist in most novels features the main character or “good guy”. Theprotagonist of The Cay is a rather unusual character living a different kind of life thanmost boys his age. Think back on some of your favorite characters from past novels youhave read. What do you think makes for an especially memorable protagonist?Vocabulary:Choose a word from the list to complete each rgravelyaviationproductioncomplain1.I thought it would be much easier to my feelings of nervousness.2.The ship took on a amount of water when it struck the reef.3.The natives were extremely nervous when the Spanish appeared.4.Phillip’s father worked at the oil on the island.5.Four hundred gallons of fuel was spilled near the schoolyard.6.The factory ceased sometime in January.7.The two brothers sailed a across the bay.8.The captain filled the of the ship with food supplies.9.“I don’t mean to ,” she said. “But I think this steak has gone bad.”.10.My Aunt Freda was ill.8

Questions1. An element of danger or peril is something that will often make for a moreinteresting story. What element of danger is lurking in this first chapter?2. Describe the setting of the story for Chapter One.3. Phillip lived in the town of , on the island ofwhich was just off the coast of . The island belonged to thecountry of .4. What made that particular area such a strategic region as far as the Germans wereconcerned?5. Despite the fact that Phillip was told by his mother to remain near home he choseto disobey her. Where did he go, with whom and why?9

6. Phillip finds Henrik irritating at times because he had an annoying way of soundingofficial. Why do you think most people find “know-it-alls” to be so annoying?7. Holland had been captured by the Nazis.TorF8. Why had Phillip’s dad been so busy at the oil refinery lately?9. When Phillip’s mother talks about moving back to Virginia because it is safe there,Phillip’s dad says that no place in now safe. Do you agree? Explain your answer.10. Foreshadowing is a literary device defined as a hint or clue provided by the writerto tip the reader as to what is to come later in the story. If the final paragraph ofChapter One is an example of foreshadowing, what is the author hinting at in termsof the future of Curacao?10

Language ActivitiesA. AlliterationThe author seems to enjoy using alliteration – a literary device where the author repeatsthe same sound at the beginning of several words. An example from Chapter One is “. . .the sorrowful sound of his voice . . .”Using your imagination, create your own examples of alliteration from the followingtopics. Each example must contain a minimum of three words.The giggle of a small childA vacuum cleanerFrom your imaginationB. The Dreaded U-BoatSubmarines struck terror in the hearts of those crossingthe Atlantic Ocean during the Second World War. Thecrews of these vessels had a number of specialchallenges to contend with on these lengthy anddangerous excursions. Use resources in your schoollibrary or on the Internet and research three interestingfacts about the German submarine of the 1940’s.1.2.3.11

C. The Quatrain Poem.The quatrain is a popular form of rhymed verse. It is a poem of four lines, is usually lightand can be humorous. The following quatrain is the first four lines from a poem calledThe Three Voices by Robert Service.The waves have a tory to tell me,As I lie on the lonely beach;Chanting aloft in the pine-tops,The wind has a lesson to teach;Various rhyming schemes make up a quatrain poem. As you can see, the above fourlines have a rhyming scheme of A – B – C – B Other rhyming schemes include: ABAB,AAAA, AABA, ABBA, ABBB, and AAAB.Your task is to write your own quatrain poem. You may choose a rhyming scheme that fitswith your own personal creation. The theme should have something to do with thethemes established in the first seven chapters of our novel.The Quatrain PoemNow create your own Quatrain Poem. Your poem must follow the format of a quatrainpoem described above (and must rhyme).Title:12

Extension ActivitiesStoryboardA storyboard is a series of pictures that tell about an important event in a story. Astoryboard can tell the story of only one scene – or the entire novel.Complete the storyboard below illustrating the events described in the first chapter of TheCay. You may wish to practice your drawings on a separate piece of paper.12345613

The protagonist in most novels features the main character or “good guy”. The protagonist of The Cay is a rather unusual character living a different kind of life than most boys his age. Think back on some of your favorite characters from past novels you have read. What do you think makes for an especially memorable protagonist? Vocabulary:

Nonprofit Self-Assessment Checklist
May 02, 2018 · D. Program Evaluation ͟The organization has provided a description of the framework for how each program will be evaluated. The framework should include all the elements below: ͟The evaluation methods are cost-effective for the organization ͟Quantitative and qualitative data is being collected (at Basics tier, data collection must have begun)
1m ago
222 Views

FRIEDRICH NIETZSCHE The Cay Science
Book Five of The Cay Science anticipates, in turn, same of the themes of another famous book which was to follow in 1887, On the Cenealogy of Morality, which is again different in tone, sustaining a more continuous theo
3m ago
5 Views

VALENCIA CAY THE CAYCONNECTION - GL Homes
resume when the time comes. I will be happy to answer any questions that you may have. Later I anticipate the formation of Committees at the direction of the Board. Many new and exciting plans and adventures for the Cay will formulate from . resident participation. Get ready! I would like t
23d ago
9 Views