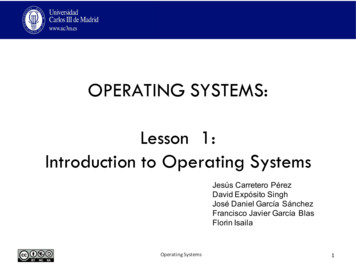 Why study Operating Systems?a) OS, and its internals, largely influences generalfunctioning, including security and performance.b) Importance of OS choice in an organization ishigher and higher. Trend to strategic decision.c) Knowledge fundamental to develop applications ifgood performance is desired and to understandcauses of many problems.Operating Systems2

Understanding OS Which OS takes better advantage of a given systemcapabilities? Does the OS support all the devices I intend to connect to thecomputer? If not, what can I do? Is it secure enough for the environment it will be integratedin? Will my applications run «smoothly» on the chosen OS? Howwill my concrete workload adapt to the platform?Operating Systems3

To make the right choice Is it easy to find admins for this OS? Is administration anobscure task needing ultra-specialized personnel? What support does the OS have? Which is the updatepublishing rate? Besides cost, what future expectations does it have?Protect yourinvestmentOperating Systems4

To develop software with goodperformance Software needs OS services for may tasks.– What services does the OS offer and how do I invokethem? To take advantage of new architecturesmultithreading is essential.– How do I develop a multithreaded application for my OS?Operating Systems5

Four Components of a ComputerSystemOperating Systems7

How a Modern Computer WorksOperating Systems10

Common Functions of Interrupts Interrupt transfers control to the interrupt serviceroutine generally, through the interrupt vector, whichcontains the addresses of all the service routines Interrupt architecture must save the address of theinterrupted instruction Incoming interrupts are disabled while another interruptis being processed to prevent a lost interrupt A trap is a software-generated interrupt caused eitherby an error or a user request An operating system is interrupt drivenOperating Systems13

Interrupt Handling The operating system preserves the CPU state bystoring registers and the program counter Determines which type of interrupt has occurred. Separate segments of code determine what actionshould be taken for each type of interruptOperating Systems14

Direct Memory Access Structure Used for high-speed I/O devices able to transmitinformation at close to memory speeds Device controller transfers blocks of data frombuffer storage directly to main memory without CPUintervention Only one interrupt is generated per block, ratherthan the one interrupt per byteOperating Systems16

Migration of Integer A from Disk toRegister Multitasking environments must be careful to use mostrecent value, no matter where it is stored in the storagehierarchy Multiprocessor environment must provide cachecoherency in hardware such that all CPUs have the mostrecent value in their cacheOperating Systems19

Caching Important principle, performed at many levels in acomputer (in hardware, operating system, software) Information in use copied from slower to faster storagetemporarily Faster storage (cache) checked first to determine ifinformation is there– If it is, information used directly from the cache (fast)– If not, data copied to cache and used there Cache smaller than storage being cached– Cache management important design problem– Cache size and replacement policyOperating Systems22

Operating System Definition (Cont) No universally accepted definition “Everything a vendor ships when you order anoperating system” is good approximation– But varies wildly “The one program running at all times on thecomputer” is the kernel. Everything else is either asystem program (ships with the operating system) oran application programOperating Systems25

Operating System Structure Multiprogramming needed for efficiency– Single program cannot keep CPU and I/O devices busy at all times– Multiprogramming organizes jobs (code and data) so CPU always has one toexecute– A subset of total jobs in system is kept in memory– One job selected and run via job scheduling– When it has to wait (for I/O for example), OS switches to another jobTimesharing (multitasking) is logical extension in which CPU switches jobs sofrequently that users can interact with each job while it is running, creatinginteractive computing– Response time should be 1 second– Each user has at least one program executing in memory [process– If several jobs ready to run at the same time [ CPU scheduling– If processes don’t fit in memory, swapping moves them in and out to run– Virtual memory allows execution of processes not completely in memoryOperating Systems26

Process Management A process is a program in execution. It is a unit of work within the system.Program is a passive entity, process is an active entity.Process needs resources to accomplish its task– CPU, memory, I/O, files– Initialization dataProcess termination requires reclaim of any reusable resourcesSingle-threaded process has one program counter specifying location ofnext instruction to execute– Process executes instructions sequentially, one at a time, untilcompletionMulti-threaded process has one program counter per threadTypically a system has many processes, some users, some operatingsystem running concurrently on one or more CPUs– Concurrency by multiplexing the CPUs among the processes / threadsOperating Systems31

I/O Subsystem One purpose of OS is to hide peculiarities ofhardware devices from the user I/O subsystem responsible for– Memory management of I/O including buffering (storingdata temporarily while it is being transferred), caching(storing parts of data in faster storage for performance),spooling (the overlapping of output of one job with inputof other jobs)– General device-driver interface– Drivers for specific hardware devicesOperating Systems36

Protection and Security Protection – any mechanism for controlling access of processes orusers to resources defined by the OS Security – defense of the system against internal and externalattacks– Huge range, including denial-of-service, worms, viruses, identitytheft, theft of service Systems generally first distinguish among users, to determine whocan do what– User identities (user IDs, security IDs) include name and associatednumber, one per user– User ID then associated with all files, processes of that user todetermine access control– Group identifier (group ID) allows set of users to be defined andcontrols managed, then also associated with each process, file– Privilege escalation allows user to change to effective ID with morerightsOperating Systems37

Layered OS Organization as a set of layers with clear and well defined interfaces. Each layer on top of lower layer. Advantates:– Modularity.– Data hiding.– Better development and debugging. Less efficient due to need to cross many layers to perform an operation. Difficult to distribute OS functions into layers. Examples:– MacOS X kernel– OS/2Operating Systems41

Client/Server approach Most services as user processes with a small amount of functioality into amicrokernel. Advantages: Very flexible. Each server can be developed and debugged in isolation. Easily extensible to a distributed model Drawbacks: Overhead in services execution. Examples: Minix y Amoeba (Tanenbaum) Mac OS and Windows NT. However services executed in kernel space for performance reasons.Operating Systems42

Modular oooo Most modern operating systems implement kernel modulesUses object-oriented approachEach core component is separateEach talks to the others over known interfacesEach is loadable as needed within the kernelOverall, similar to layers but with more flexibleOperating Systems43

OS startup OS starts up whe computer is switched on.– Initially in secondary storage.– How does it come to main memory?– How des it start execution after being loaded?Operating Systems45

OS loader Program loader is in disk boot sector. Responsible for loading the rest of the OS. Verifies the magic word in boot sector.Operating Systems49

Generating the OS OS designed for a complete class of machines with severalvariants of configurations and many supported devices. Need to generate OS copy based on characteristics of specificmachine configuration. Generation performed during initial installation.GenericOSGenerationOperating SystemsSpecificOS50

Operating Systems Why study Operating Systems? a) OS, and its internals, largely influences general functioning, including security and performance. b) Importance of OS choice in an organization is higher and higher. Trend to strategic decision. c) Knowledge fundamental to develop applications if good performance is desired and to understand

Geometry Dash Editor Guide - Boomlings
Welcome to the Geometry Dash Editor Guide! This guide will take you through the editor and its features so you can create your own levels! 1 Table of Contents Lesson 1: Basic Building Techniques 2 Lesson 2: Editing 8 Lesson 3: Deletion 12 Lesson 4: Testing and More 13 Lesson 5: Portals and Other Gameplay Objects 14 Lesson 6: Advanced Building Techniques 19 Lesson 7: Editor Buttons 23 Lesson 8 .
8m ago
54 Views