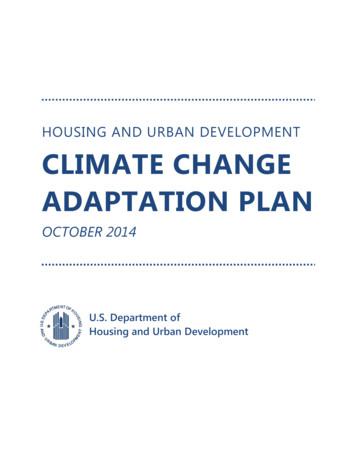 U.S. Department of Housing and Urban DevelopmentClimate Change Adaptation PlanLETTER FROM THE SECRETARYCommunities across America are grappling with the harmful impact of climate change.And the effects are only expected to increase and intensify in the years to come. Erosion andflooding threaten some communities, while others struggle with wildfires made worse bydrought. Still others face relocation due to permafrost melt or rising sea levels. Dealing withclimate-related impacts is part of the Department of Housing and Urban Development’s (HUD’s)mission to create strong, sustainable, inclusive communities, and quality affordable homes for allAmericans.The Department invests billions of dollars every year in housing, infrastructure, andservices in communities across America. As the National Climate Assessment recentlydocumented, climate-related risk is rapidly increasing. These risks are compounded where thereis aging infrastructure and as our population becomes more urbanized and further concentratesalong the nation’s coastlines. Essential local and regional infrastructure systems (e.g., water,energy, and transportation) are interdependent and increasingly disrupted by the effects ofclimate change. These impacts are exacerbated by existing social inequities whichdisproportionately affect already vulnerable populations — the same populations that HUDserves each and every day. Rural and Native American communities also face increased threatsand rely on core HUD programs.In addition to the substantial investment HUD makes every year in physical infrastructure,the Department is one of the largest sources of funding for long-term disaster recovery. Since2006, Congress has appropriated more than 40 billion to HUD for communities where thePresident has declared a major disaster. These funds help communities reinvest in housing,economic development, and infrastructure in ways that prevent damage from future disasters,consistent with the National Disaster Recovery Framework.The Department is committed to identifying threats and adapting policies andinvestments to help communities to better prepare for and respond to the effects of climatechange, including rebuilding after natural disasters. As a result of this work, HUD and its partnersare helping to protect lives and livelihoods, promote equitable and sustainable development,and more responsibly invest limited fiscal resources. In doing this, HUD is saving taxpayer dollarsby ensuring preventative measures are taken to reduce future disaster response and recoverycosts. HUD is working to manage the effects of climate change on its mission, programs, andoperations by: Page 3 of 71Engaging experts inside and outside of the Department to better understand therisks and impacts of climate change.Letter from the Secretary

U.S. Department of Housing and Urban DevelopmentClimate Change Adaptation Plan Working with grantees to help reduce the vulnerability of local communities toclimate change. Ensuring that the lives of vulnerable and disadvantaged populations are not onlyconsidered, but improved, as a result of these activities. Consulting with all levels of government (state, local, tribal, and territorial) to identifyand remove policy, programmatic, and other barriers to resilient investments andrespond to the needs of communities impacted by climate change. Enforcing and implementing relevant civil rights statutes and environmental justicepolicies as they pertain to climate change.Recently, HUD established an internal HUD Resilience Council to align new approachesinvolving key HUD programs with investments that enhance resilience to the effects of climatechange and other natural disasters. The Council, chaired by the Director of the Office ofEconomic Resilience who reports directly to me, serves as the Department’s forum for policydiscussion and action to ensure all HUD activities incorporate resilience to natural disasters andclimate-related threats.The potential effects of climate change on HUD, the nation, and the world are sobering.This Climate Change Adaptation Plan lays out a path for responding to the impacts of climatechange on HUD’s mission, programs, and operations. Through the Resilience Council, HUD willtrack the implementation of this Plan — but, we can’t stop there. We need action from everyHUD employee, grantee, and member of the public to look for innovative ways to better prepareand adapt to a changing climate. Together, we face an unprecedented challenge that bringswith it an opportunity to innovate and improve the lives and livelihoods of communities acrossthe country.Sincerely,Julián Castro, SecretaryU.S. Department of Housing and Urban DevelopmentPage 4 of 71Letter from the Secretary

U.S. Department of Housing and Urban DevelopmentClimate Change Adaptation PlanEXECUTIVE SUMMARYIntroductionThe Third National Climate Assessment (released on May 6, 2014) contains an importantmessage: climate change is not a distant threat or a scientific theory. It is alreadyadversely affecting people in communities across the country. Climate-related hazardsare myriad and range from extreme weather events to sea level rise. Each of theDepartment’s many programs and communities served possess unique characteristicsthat contribute to the collective ability of the Department, its stakeholders, and itsgrantees to cope with the adverse effects of climate change. Taken together, the riskposed by climate change on HUD’s programs and operations, the built environmentHUD funds, and populations HUD serves is high. Real action is necessary to moderatethe negative effects of climate change.This Climate Change Adaptation Plan outlines out a set of actions designed to addresssome of the risk posed by climate change to the Department’s mission, programs, andoperations. In order to develop these actions, the Department participated in anadaptation planning exercise that began with an identification of climate-related riskand vulnerabilities. The results of this assessment are summarized in the Cross-Walk ofVulnerabilities below. For further detail see Appendix A: Risks and VulnerabilitiesAssessment.The threat posed by climate change to our country requires a comprehensive set ofactions beyond what this plan lays out below. For instance, state and local governmentsmay need to consider updating land use regulations, building codes, and other policiesto protect the lives and livelihoods of their residents. The Department will continue toupdate this plan in accordance with Executive Order 13653, following the release of thenext National Climate Assessment. In addition, the Department will continue to workwith its stakeholders and to identify additional measures to address the impact ofclimate change.Page 5 of 71Executive Summary

U.S. Department of Housing and Urban DevelopmentClimate Change Adaptation PlanHOW AND WHY THIS PLAN WAS DEVELOPEDHUD developed this plan in response to Executive Orders 13514 and 13653. Under theseExecutive Orders, each Executive department and agency is required to evaluate risks related toclimate change that threaten their mission, programs, or operations. In addition, lessons learnedfrom Hurricane Sandy and other recent disasters, as well as the Department’s work to executethe President’s Climate Action Plan greatly influenced this plan.On October 5, 2009, the President issued Executive Order 13514 (EO 13514), which requiredFederal agencies to evaluate climate change risks and vulnerabilities to each agency’s operationsand mission. The White House Council on Environmental Quality (CEQ) subsequently issuedthree guidance documents, pursuant to EO 13514, regarding considerations critical to Federalagency climate change adaptation planning. Together, EO 13514 and guidance documentscalled on every Executive Agency to identify risks and vulnerabilities to the agency’s mission,programs, and operations posed by climate change, and develop, prioritize, and implementsactions that address these risks and vulnerabilities. In response, HUD issued its first AgencyClimate Change Adaptation Plan in 2012. The Under 5 Initiative2 at HUD spearheadeddevelopment of the 2012 plan with input from each office.The President issued Presidential Policy Directive 8 (“National Preparedness”) on March 30, 2011,which called for the development of a National Preparedness Goal and subsequent NationalPreparedness System to strengthen the security and resilience3 of the United States to a widevariety of major threats. As a result, there are five National Planning Frameworks (Prevention,Protection, Mitigation, Response, and Disaster Recovery) that describe how an entire communityworks together to achieve the National Preparedness Goal. HUD is actively involved in federalleadership groups to execute core capabilities identified in several of these frameworks. Forinstance, HUD leads the Housing Recovery Support Function within the National DisasterRecovery Framework. The focus of these efforts includes increasing the nation’s resilience tocatastrophic natural disasters, among other threats.On November 6, 2013, the President issued Executive Order 136534 (EO 13653) to prepare theUnited States for the impact of climate change and enhance our climate preparedness andresilience. This Executive Order called on Executive Agencies to further develop, update, and2Under 5 is a grassroots group of employees at HUD focused on retaining new hires and talent at the agency by engaging them to developproactive solutions to improving agency operations through constructive engagement.3PPD-8 defines resilience as “the ability to adapt to changing conditions and withstand and rapidly recover from disruption due to emergencies.”4EO 13653 defines resilience as “the ability to anticipate, prepare for, and adapt to changing conditions and withstand, respond to, and recoverrapidly from disruptions.”Page 9 of 71How and Why This Plan was Developed

U.S. Department of Housing and Urban DevelopmentClimate Change Adaptation Planimplement their Agency Climate Change Adaptation Plans. In addition, EO 13653 created theCouncil on Climate Change Preparedness and Resilience and disbanded the Interagency ClimateChange Adaptation Task Force. This new council, and the task force before it, supports thedevelopment of Agency Climate Change Adaptation Plans as well as Federal efforts to preparefor the impact of climate change broadly. Subsequently, the Council on Environmental Qualityissued guidance on December 19, 2013 to direct the development of Agency Climate ChangeAdaptation Plans in accordance with EO 13653.The Hurricane Sandy Rebuilding Task Force, established by President Obama, chaired bySecretary Donovan, and made up of principals from more than 15 Federal departments,agencies, and White House offices, released its Rebuilding Strategy on August 19, 2013. Thisstrategy included 69 policy recommendations, including ones focused on improving the nation’sability to withstand and recover effectively from future climate-related disasters. PresidentObama’s Climate Action Plan incorporated several policies and principles developed by theHurricane Sandy Rebuilding Task Force. The Climate Action Plan laid out a series of responsible,common sense steps to prepare communities for the impacts of a changing climate. These stepsincluded the need for the Federal government to make investments based on the most up-todate information about future risks.This plan also aligns with HUD’s commitments under Executive Order 12898, “Federal Actions ToAddress Environmental Justice in Minority Populations and Low-Income Populations” (February11, 1994), which directs each Federal agency, to the greatest extent practicable and permitted bylaw, to make achieving environmental justice part of its mission by identifying and addressing,as appropriate, disproportionately high and adverse human health or environmental effects ofits programs, policies, and activities on minority populations and low-income populations in theUnited States and its territories and possessions, the District of Columbia, the Commonwealth ofPuerto Rico, and the Commonwealth of the Mariana Islands.Recognizing the need to institutionalize lessons learned and align new approaches to enhanceresilience, HUD Secretary Shaun Donovan created the HUD Resilience Council and tasked it withcreating this plan. The Resilience Council includes principals from each of HUD’s core offices andis staffed by designees from each office. To 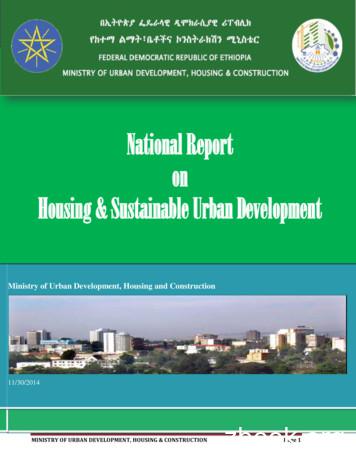 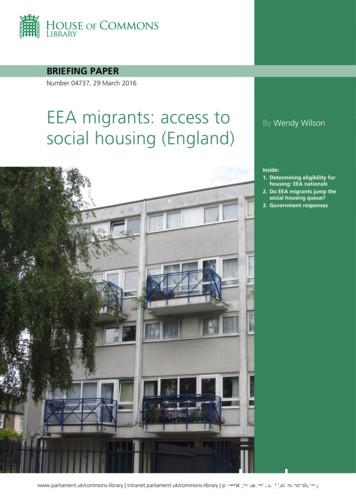 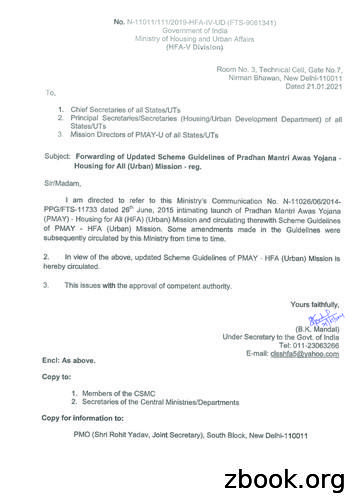 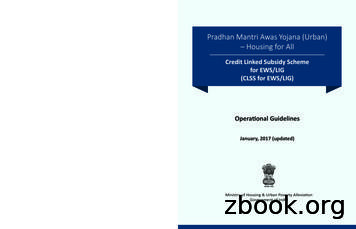 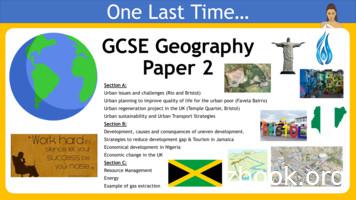 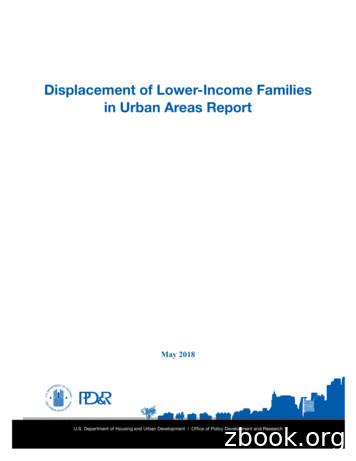 Displacement of Lower-Income Families in Urban Areas Report
10,000 public housing units annually points to the need for programs such as HUD’s Rental Assistance Demonstration (RAD) that help the private market invest in decent, safe, and affordable housing. 2. Encourage greater housing development, including but not limited to affordable housing. Housing costs have
2m ago
7 Views 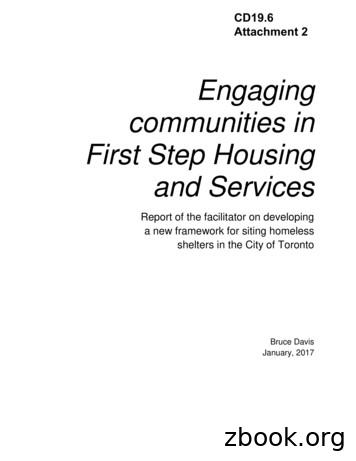 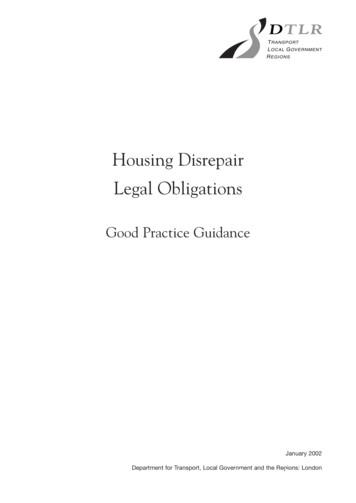 Housing Disrepair Pages - GOV.UK
a Best Value approach to housing. This guidance is directed primarily to local authority policy staff and those involved in ... Housing and Health(1998) Chartered Institute of Housing, Good Practice Unit, and other guidance and advice issued by the Audit Commission and the Chartered Institute of Housing. Housing Disrepair Legal Obligations ...
2m ago
3 Views 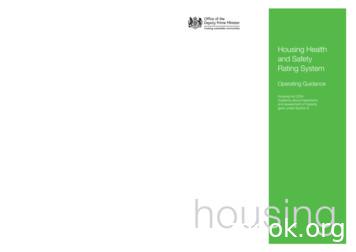 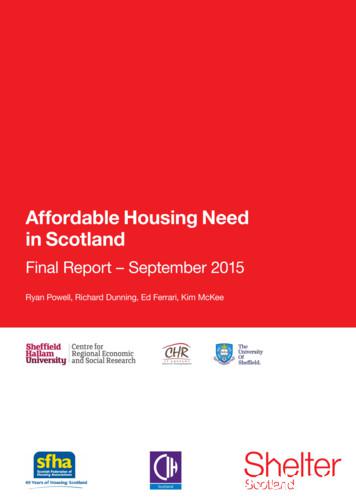 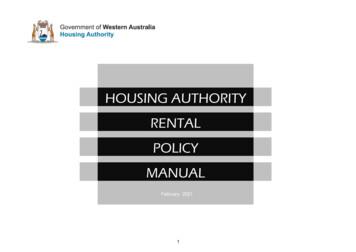 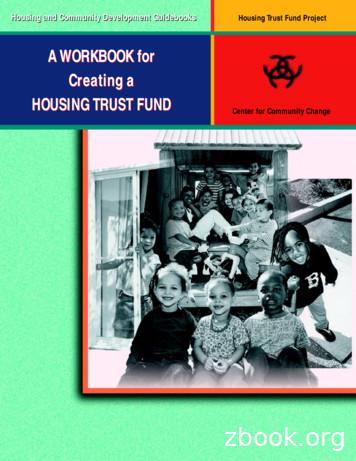