The Role Of Spectroscopy In Organic Synthesis 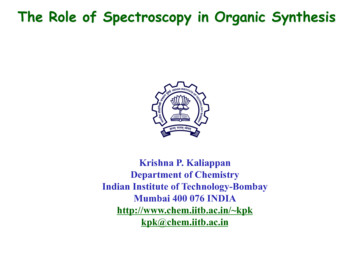 Birth of Organic SynthesisØ First total synthesis of a natural product, urea by Wohler in 1828Ø Marks the beginning of organic synthesisØ Conversion of an inorganic substance (ammonium cyanate) into anorganic substance for the first timeØ Until this discovery, it was believed that organic substances couldonly be formed under the influence of the “vital force” in thebodies of animals and plantsØ Hence, this disproved the “vitalism”

Introduction of “Synthesis”Ø As the second major achievement, acetic acid was synthesized fromelemental carbon by Kolbe in 1845Ø For the first time he coined the word “synthesis” to describe theprocess of assembling a chemical compound from other substances

Development of Grignard ReagentGrignard Reaction: Nobel prize in 1912 for the discovery of theso-called Grignard reagent, which in recent years has greatlyadvanced the progress of organic chemistryPowerful tool to synthesize new C-C bondProvides flexibility in the synthesisCompt. Rend. 1900, 130, 1322

Development of Mannich ReactionMannich Reaction:Ø Amino alkylation of an acidic proton placed next to acarbonyl functional groupØ The final product is a β-amino-carbonyl compoundArchiv der Pharmazie 1912, 250, 6457

Organic Synthesis Through TimeØ Organic synthesis has always been one of the celebrated fields ofresearch activities through the development of science.Ø With time the size and complexity of molecular scaffolds haveincreased manifolds.Ø With the evolution of natural products synthesis as a major field ofresearch, highly complex organic molecules are regularly isolated orsynthesized.OOO H- ourseInstructor:KrishnaP.Kaliappan

Molecular CharacterizationØ Once synthesized, a molecule had to be characterized.Ø Old characterization techniques involved destructive methods likebreaking down the molecule into smaller fragments or breaking it downcompletely for elemental analysis.Ø Apart from being time consuming and painstaking, such methods led toloss of precious compounds during characterization.Ø With molecules being more and more stereochemically diverse,methods of assigning stereochemistry had to be invented.CH- ourseInstructor:KrishnaP.Kaliappan

The Story of EnantiomersØ In 1848, Louis Pasteur discovered that tartaric acidhad two types of crystals which had opposite effecton plane polarized light.Ø He was the first person to separate the twoenantiomers manually by the help of nothing but apair of tweezers and a microscope!COOHHCOOHOHHOHCOOHL( ) tartaric acidHOHHOHCOOHD(-) tartaric acidØ But still there remained the unsolved question of identifying the bondconnectivity and absolute stereochemistries CH- ourseInstructor:KrishnaP.Kaliappan

Stereochemical ConfigurationØ During the turn of the 19th to 20th century, EmilFischer made his greatest contribution towards thesynthesis of sugars and assigning the stereochemicalrelation between them.Ø For characterization, he used chemical techniques likeoxidation, reduction, homologation and commonosazone formation (which he used to crystalizethrough the help of his beard!).Ø Combining all these techniques together, he successfully assigned thestereochemical relationship between epimers like glucose and mannose.Ø More importantly, he correctly assigned the relative stereochemistriesof all the stereocenters of the sugars, which in that era was aremarkable achievement!CH- ourseInstructor:KrishnaP.Kaliappan

WaveØ It transfers energy from one place to another.Ø In case of light, the energy is transferred due to local fluctuationsin electric and magnetic field.Ø Wavelength Distance between two crestsRed 625 nmGreen 520 nmØ Frequency No. of crests passing through a particular point persecondCH- ourseInstructor:KrishnaP.Kaliappan21

Ultraviolet SpectroscopyØ UV light can be absorbed by molecules to excite higher energy (mostloosely bound) electrons from lower energy states to higher states.Ø Such transitions can be studied extensively to understand the bindingenergy of the corresponding electrons undergoing transition.Ø Since π-electrons are most loosely bound in an organic molecule, UVspectroscopy yields a lot of information about the degree ofunsaturation in a molecule.Ø When the wavelength of the transition exceeds the UV range, basedon the same principle, even the colours of molecules can be explainedon the basis of absorption of visible light.β-caroteneλmax 452 nm1,3-butadieneλmax 217 nmCH- ourseInstructor:KrishnaP.Kaliappan

Infrared SpectroscopyØ IR light can be absorbed by the vibrational modes of molecules to getexcited to higher vibrational levels.Ø Molecular vibrations constitute of vibrations across bonds or certaingroups as a whole.Ø So IR spectroscopy gives a lot of information on the functional groupsand types of bonds present in the molecule.Ø Even for the same functional group, there is distinct differencebetween the stretching frequencies.HC C OOHνC O(stretch) 2140 cm-1νC O(stretch) 1715 cm-1CH- ourseInstructor:KrishnaP.Kaliappan

NMR SpectroscopyØ Magnetically active nuclei split into their corresponding nuclear spinstates upon being exposed to magnetic field.Ø When the frequency of this nuclear transition couples with that of anexternally supplied radiofrequency wave, resonance is said to takeplace.Ø A huge number of magnetically active nuclei can be probed throughthis technique: 1H, 2D, 13C, 19F, 31P, 11B, 77Se, 125Te to name a few.Ø 1H NMR is probably the most informative and widely used technique.Ø NMR spectroscopy provides information about the different types ofprotons present in the system, the number of each type of protonpresent and also the chemical environment in which the differenttypes of protons are present.CH- ourseInstructor:KrishnaP.Kaliappan

NMR SpectroscopyØ 13CNMR also can be very useful in providing information about thetypes of carbons present in the molecule.Ø Attached Proton Test (APT) and Distortionless Enhancement byPolarization Transfer (DEPT) can also give information about thenumber of protons attached to any carbon.Ø 2-dimensional NMR spectroscopy correlates different nuclei with oneanother and gives information about how they are connected betweenthemselves either through bond or through space.Ø For a standard organic molecule of average complexity, a properlyrecorded combination of all these NMR techniques is more thansufficient to identify the structure of the molecule completely.CH- ourseInstructor:KrishnaP.Kaliappan

Mass SpectrometryØ Molecules are ionized by various techniques and then filteredaccording to their masses.Ø During this process, molecules might break down into constituentfragments, based on the stability of ions formed. Even thesefragments are detected and returned according to their masses.Ø Technique is fundamentally different from others described becausehere there is no interaction of matter with electromagnetic radiation.Hence this technique is called spectrometry (and not spectroscopy).Ø A mass spectrum can give information about the molecular weight ofthe parent compound.Ø Based on the mass of the fragments formed, or of those which areeliminated, one can deduce vital information about the possiblefunctional groups present.CH- ourseInstructor:KrishnaP.Kaliappan