Network/Graph Is A Set Of Nodes Theory - Free Download PDF 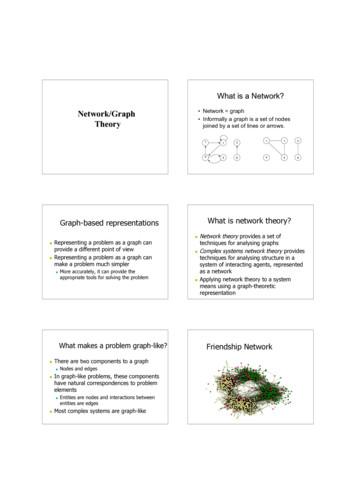 What is a Network? Network graph Informally a graph is a set of nodesjoined by a set of lines or arrows.Network/GraphTheory Representing a problem as a graph canprovide a different point of viewRepresenting a problem as a graph canmake a problem much simpler More accurately, it can provide theappropriate tools for solving the problemWhat makes a problem graph-like? There are two components to a graph Nodes and edgesIn graph-like problems, these componentshave natural correspondences to problemelementsEntities are nodes and interactions betweenentities are edgesMost complex systems are graph-like23456123456What is network theory?Graph-based representations 1 Network theory provides a set oftechniques for analysing graphsComplex systems network theory providestechniques for analysing structure in asystem of interacting agents, representedas a networkApplying network theory to a systemmeans using a graph-theoreticrepresentationFriendship Network

Definition: GraphDefinitions G is an ordered triple G: (V, E, f)– V is a set of nodes, points, or vertices.– E is a set, whose elements are known asedges or lines.– f is a function Vertex– Basic Element– Drawn as a node or a dot.– Vertex set of G is usually denoted by V(G), or V Edge– A set of two elements– Drawn as a line connecting two vertices, calledend vertices, or endpoints.– The edge set of G is usually denoted by E(G), orE. maps each element of E to an unordered pair of vertices in V.Simple GraphsExampleSimple graphs are graphs without multipleedges or self-loops. V: {1,2,3,4,5,6} E: d Graph (digraph)Weighted graphs is a graph for which each edge has anassociated weight, usually given by a weightfunction w: E R. Edges have directions– An edge is an ordered pair of nodesloopmultiple arcarc1node1.223.2.3.541.55.516221435536

Structures and structuralmetrics Graph structures are used to isolateinteresting or important sections of agraphStructural metrics provide a measurementof a structural property of a graph Global metrics refer to a whole graphLocal metrics refer to a single node in a graphConnectivity a graph is connected if– you can get from any node to any other byfollowing a sequence of edges OR– any two nodes are connected by a path.Graph structures Identify interesting sections of a graph Interesting because they form a significantdomain-specific structure, or because theysignificantly contribute to graph propertiesA subset of the nodes and edges in agraph that possess certain characteristics,or relate to each other in particular waysComponent Every disconnected graph can be splitup into a number of connectedcomponents. A directed graph is strongly connected ifthere is a directed path from any node to anyother node.DegreeDegree (Directed Graphs) Number of edges incident on a node In-degree: Number of edges entering Out-degree: Number of edges leaving Degree indeg outdegoutdeg(1) 2indeg(1) 0outdeg(2) 2indeg(2) 2The degree of 5 is 3outdeg(3) 1indeg(3) 4

WalksDegree: Simple Facts If G is a graph with m edges, thenΣ deg(v) 2m 2 E If G is a digraph thenΣ indeg(v) Σ outdeg(v) E Number of Odd degree Nodes is evenA walk of length k in a graph is a succession of k(not necessarily different) edges of the formuv,vw,wx, ,yz.This walk is denote by uvwx xz, and is referred toas a walk between u and z.A walk is closed is u z.PathCycle A path is a walk in which all the edges and allthe nodes are different.1,2,5,2,3,4walk of length 5Walks and Paths1,2,5,2,3,2,1CW of length 6 A cycle is a closed path in which all theedges are different.1,2,3,4,6path of length 4Special Types of Graphs Empty Graph / Edgeless graph1,2,5,13-cycle2,3,4,5,24-cycleTrees Connected Acyclic Graph– No edge Two nodes have exactlyone path between them Null graph– No nodes– Obviously no edge

Special TreesRegularConnected GraphPathsAll nodes have the samedegreeStarsBipartite graphSpecial Regular Graphs: Cycles V can be partitionedinto 2 sets V1 and V2such that (u,v) EimpliesC3C4C5Complete Graph Every pair of vertices are adjacent Has n(n-1)/2 edges– either u V1 and v V 2– OR v V 1 and u V2.Complete Bipartite Graph Bipartite Variation of Complete Graph Every node of one set is connected toevery other node on the other setStars

Planar Graphs Can be drawn on a plane such that no two edgesintersect K4 is the largest complete graph that is planarSpecial Subgraphs:Subgraphs: CliquesA clique is a maximum completeconnected subgraph.ABCDEFGHISpanning tree Let G be a connected graph. Then aspanning tree in G is a subgraph of Gthat includes every node and is also atree.Subgraph Vertex and edge sets are subsets ofthose of G– a supergraph of a graph G is a graph thatcontains G as a subgraph.Spanning subgraph Subgraph H has the same vertex set asG.– Possibly not all the edges– “H spans G”.Isomorphism Bijection, i.e., a one-to-one mapping:f : V(G) - V(H)u and v from G are adjacent if and onlyif f(u) and f(v) are adjacent in H. If an isomorphism can be constructedbetween two graphs, then we say thosegraphs are isomorphic. 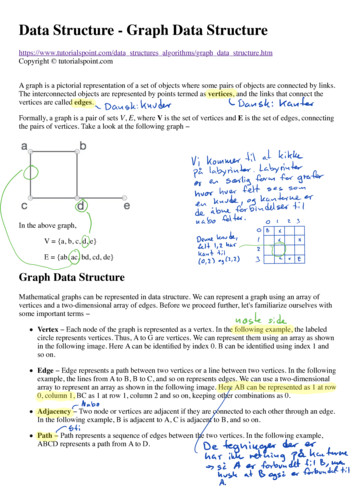 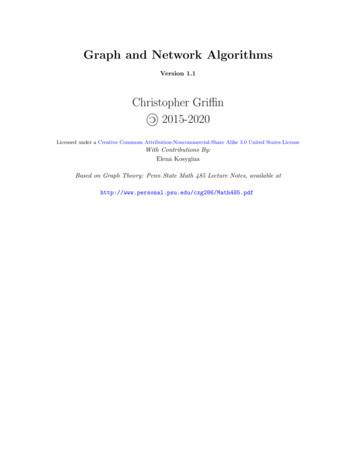 Graph and Network Algorithms
1.8 The complete graph, the \Petersen Graph" and the Dodecahedron. All Platonic solids are three-dimensional representations of regular graphs, but not all regular graphs are Platonic solids. These gures were generated with Maple.10 1.9 The Petersen Graph is shown (a) with a sub-graph highlighted (b) and that sub-graph displayed on its own (c).
20d ago
3 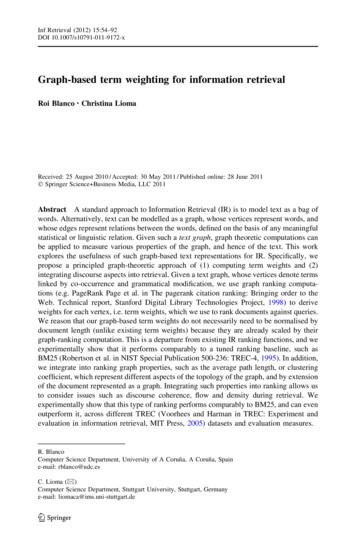 Graph-based term weighting for information retrieval
statistical or linguistic relation. Given such a text graph, graph theoretic computations can be applied to measure various properties of the graph, and hence of the text. This work explores the usefulness of such graph-based text representations for IR. Speciﬁcally, we propose a principled graph-theoretic approach of (1) computing term ...
1m ago
0 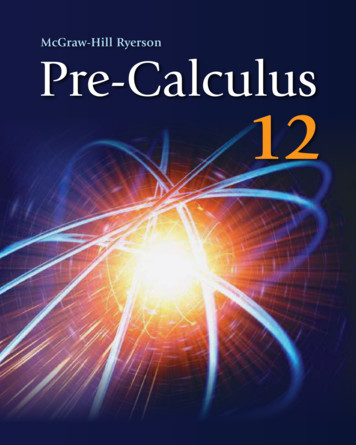 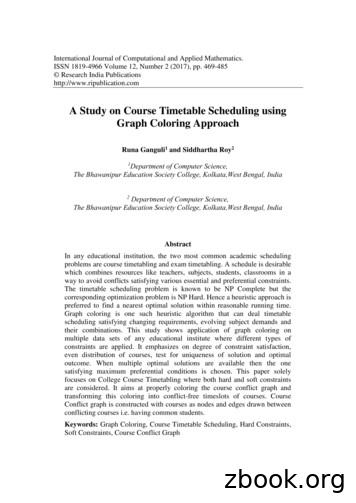 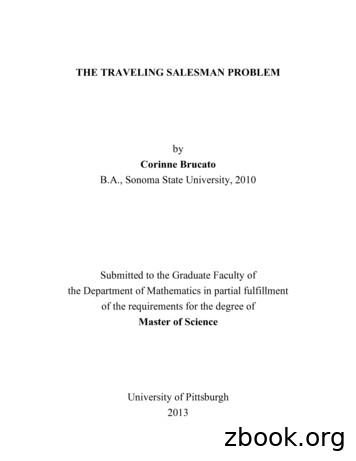 The Traveling Salesman Problem - [email protected]
The platonic solids in ﬁgures 2.1 through 2.7 will be used to explain some basics of Graph Theory. b a d c. Figure 2.1: Tetrahedral Graph. g f e h b a d c. Figure 2.2: Cubical Graph. Deﬁnition 1. [Simple Graph] A simple graph, G = (V,E), is a ﬁnite nonempty set V of objects called vertices (singular vertex) to-
20d ago
1 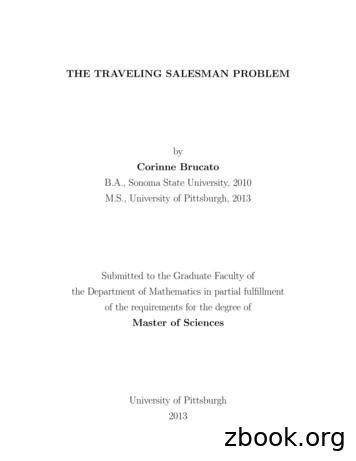 The Traveling Salesman Problem
The platonic solids in gures 2.1 through 2.7 will be used to explain some basics of Graph Theory. b a d c Figure 2.1: Tetrahedral Graph g f e h b a d c Figure 2.2: Cubical Graph De nition 1. [Simple Graph] A simple graph, G = (V,E), is a nite nonempty set V of objects called vertices (singular vertex) to-
20d ago
1 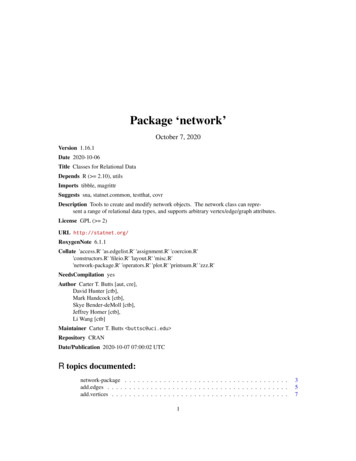 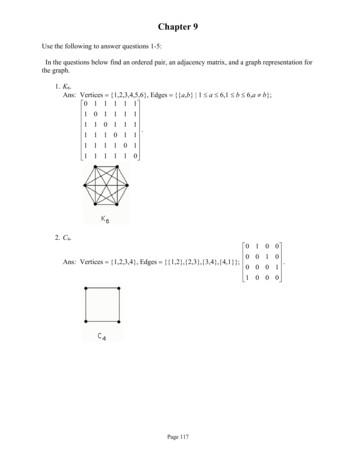 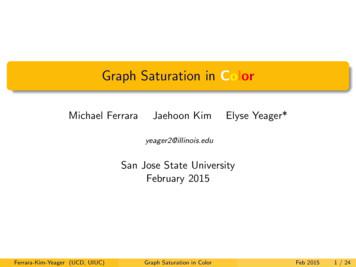 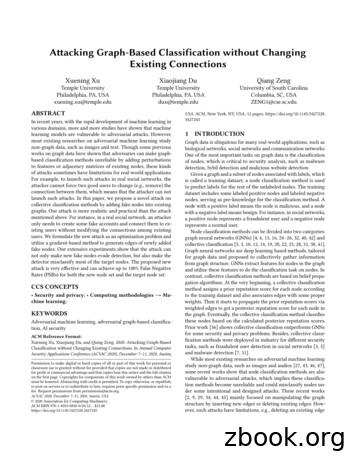 Attacking Graph-Based Classification without Changing .
Other graph neural network methods [4 ,16 26] solve graph tasks in the manner of end-to-end. The architecture of the neural network varies according to the graph structure. A neuron connect-ing to the neurons in the previous layer simulates a node linking its neighbors. These neurons in the hidden layers stand for feature
1m ago
1 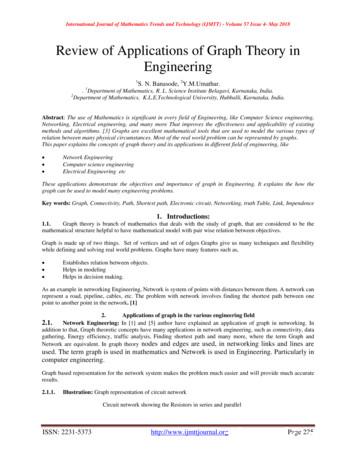 Review of Applications of Graph Theory in Engineering
addition to that, Graph theoretic concepts have many applications in network engineering, such as connectivity, data gathering, Energy efficiency, traffic analysis, Finding shortest path and many more, where the term Graph and Network are equivalent. In graph theory nodes and edges are used, in networking links and lines are used.
1m ago
1
Popular Tags
Recent Views