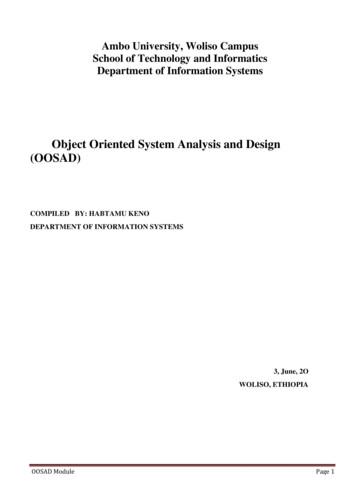 Chapter 1: Understanding the Basics: Object oriented concepts1.1 A Brief HistoryThe object-oriented paradigm took its shape from the initial concept of a new programmingapproach, while the interest in design and analysis methods came much later. The first object–oriented language was Simula (Simulation of real systems) that wasdeveloped in 1960 by researchers at the Norwegian Computing Center. In 1970, Alan Kay and his research group at Xerox PARK created a personal computernamed Dynabook and the first pure object-oriented programming language (OOPL)Smalltalk, for programming the Dynabook. In the 1980s, Grady Booch published a paper titled Object Oriented Design that mainlypresented a design for the programming language, Ada. In the ensuing editions, heextended his ideas to a complete object– oriented design method.In the 1990s, Coad incorporated behavioral ideas to object-oriented methods.The other significant innovations were Object Modelling Techniques (OMT) by JamesRumbaugh and Object-Oriented Software Engineering (OOSE) by Ivar Jacobson.1.2. Object-Oriented AnalysisObject–Oriented Analysis (OOA) is the procedure of identifying software engineeringrequirements and developing software specifications in terms of a software system’s objectmodel, which comprises of interacting objects.The main difference between object-oriented analysis and other forms of analysis is that inobject-oriented approach, requirements are organized around objects, which integrate both dataand functions. They are modelled after real-world objects that the system interacts with. Intraditional analysis methodologies, the two aspects - functions and data - are consideredseparately.Grady Booch has defined OOA as, “Object-oriented analysis is a method of analysis thatexamines requirements from the perspective of the classes and objects found in the vocabularyof the problem domain”.The primary tasks in object-oriented analysis (OOA) are: Identifying objects Organizing the objects by creating object model diagram Defining the internals of the objects, or object attributes Defining the behavior of the objects, i.e., object actions Describing how the objects interactThe common models used in OOA are use cases and object models.1.3. Object-Oriented DesignObject–Oriented Design (OOD) involves implementation of the conceptual model producedduring object-oriented analysis. In OOD, concepts in the analysis model,which aretechnology independent,are mapped onto implementing classes, constraints are identified andOOSAD ModulePage 4

interfaces are designed, resulting in a model for the solution domain, i.e., a detailed descriptionof how the system is to be built on concrete technologies.The implementation details generally include: Restructuring the class data (if necessary), Implementation of methods, i.e., internal data structures and algorithms, Implementation of control, and Implementation of associations.Grady Booch has defined object-oriented design as “a method of design encompassing theprocess of object-oriented decomposition and a notation for depicting both logical and physicalas well as static and dynamic models of the system under design”.1.4. IntroductionObject-oriented analysis and design (OOAD) is a software engineering approach that modelsa system as a group of interacting objects. Each object represents some entity of interest in thesystem being modeled, and is characterised by its class, its state (data elements), and itsbehavior. Various models can be created to show the static structure, dynamic behavior, andrun-time deployment of these collaborating objects. There are a number of different notationsfor representing these models, one such model is UnifiedModeling Language (UML).1.4.1. THE OBJECT MODELObject oriented development offers a different model from the traditional softwaredevelopment approach, which is based on functions and procedures. An Object-Oriented environment, software is a collection of discrete objects thatencapsulate their data and the functionality to model real world “Objects”. Object are defined, it will perform their desired functions and seal them off in ourmind like black boxes. The object- Oriented life cycle encourages a view of the world as a system ofcooperative and collaborating agents. An objective orientation producers system that are easier evolve, move flexiblemore robust, and more reusable than a top-down structure approach. An object orientation allows working at a higher level of abstraction. It provides a seamless transition among different phases of software development. It encourages good development practices. It promotes reusability.The unified Approach (UA) is the methodology for software development proposedand used and the following concepts consist of Unified Approach1.4.2.Object-Oriented ProgrammingObject-oriented programming (OOP) is a programming paradigm based upon objects (havingboth data and methods) that aims to incorporate the advantages of modularity and reusability.Objects, which are usually instances of classes, are used to interact with one another to designapplications and computer programs.The important features of object–oriented programming are: Bottom up approach in program design Programs organized around objects, grouped in classesOOSAD ModulePage 5

Focus on data with methods to operate upon object’s data Interaction between objects through functions Reusability of design through creation of new classes by adding features to existingclassesSome examples of object-oriented programming languages are C , Java, Smalltalk, Delphi,C#, Perl, Python, Ruby, and PHP.Grady Booch has defined object–oriented programming as “a method of implementation inwhich programs are organized as cooperative collections of objects, each of which representsan instance of some class, and whose classes are all members of a hierarchy of classes unitedvia inheritance relationships”.OBJECT MODELThe object model visualizes the elements in a software application in terms of objects. In thischapter, we will look into the basic concepts and terminologies of object–oriented systems.Objects and ClassesThe concepts of objects and classes are intrinsically linked with each other and form thefoundation of object–oriented paradigm.ObjectAn object is a real-world element in an object–oriented environment that may have a physical ora conceptual existence. Each object has: Identity that distinguishes it from other objects in the system. State that determines the characteristic properties of an object as well as the values of theproperties that the object holds. Behavior that represents externally visible activities performed by an object in terms ofchanges in its state.Objects can be modeled according to the needs of the application. An object may have aphysical existence, like a customer, a car, etc.; or an intangible conceptual existence, like aproject, a process, etc.ClassA class represents a collection of objects having same characteristic properties that exhibitcommon behavior. It gives the blueprint or description of the objects that can be created from it.Creation of an object as a member of a class is called instantiation. Thus, object is an instance ofa class.The constituents of a class are: A set of attributes for the objects that are to be instantiated from the class. Generally,different objects of a class have some difference in the values of the attributes. Attributesare often referred as class data. A set of operations that portray the behavior of the objects of the class. Operations arealso referred as functions or methods.ExampleLet us consider a simple class, Circle, that represents the geometrical figure circle in a two–dimensional space. The attributes of this class can be identified as follows: x–coord, to denote x–coordinate of the center y–coord, to denote y–coordinate of the center a, to denote the radius of the circleSome of its operations can be defined as follows: findArea(), method to calculate area findCircumference(), method to calculate circumference scale(), method to increase or decrease the radiusDuring instantiation, values are assigned for at least some of the attributes. If we create an objectmy circle, we can assign values like x-coord : 2, y-coord : 3, and a :4 to depict its state. Now, ifOOSAD ModulePage 6

the operation scale() is performed on my circle with a scaling factor of 2, the value of thevariable a will become 8. This operation brings a change in the state of my circle, i.e., the objecthas exhibited certain behavior.Encapsulation and Data HidingEncapsulationEncapsulation is the process of binding both attributes and methods together within a class.Through encapsulation, the internal details of a class can be hidden from outside. It permits theelements of the class to be accessed from outside only through the interface provided by theclass.Data HidingTypically, a class is designed such that its data (attributes) can be accessed only by its classmethods and insulated from direct outside access. This process of insulating an object’s data iscalled data hiding or information hiding.ExampleIn the class Circle, data hiding can be incorporated by making attributes invisible from outsidethe class and adding two more methods to the class for accessing class data, namely: setValues(),

Object-oriented analysis and design (OOAD) is a software engineering approach that models a system as a group of interacting objects. Each object represents some entity of interest in the . different objects of a class have some difference in the values of the attributes. Attributes are often referred as class data.

Chapter 8: Object-Oriented Databases
2 Database System Concepts 8.3 Silberschatz, Korth and Sudarshan Object-Oriented Data Model! Loosely speaking, an object corresponds to an entity in the E- R model.! The object-oriented paradigm is based on encapsulating code and data related to an object into single unit.! The object-oriented data model is a logical data model (like
5m ago
19 Views

Object-Oriented Analysis & Design - tutorialspoint
object model, which comprises of interacting objects. The main difference between object-oriented analysis and other forms of analysis is that in object-oriented approach, requirements are organized around objects, which integrate both data and functions. They are modelled after real-world objects that the system interacts with.
6m ago
65 Views

Is Schrödinger's Cat Object-Oriented? - Literate Programming
About Object-Oriented Technology Object-Oriented technology is gaining rapid acceptance among software developers, and is becoming the preferred choice for modern computer programming projects. Should a natural scientist care? We discuss some of the main concepts in object-oriented programming and the potential of this interesting technology .
5m ago
12 Views